Watchmakers and high-profile collectors get plenty of glory. But the dealers who connect them are an equally important part of the equation. Their unique position at the literal center of things means they have the ability to spot (and set) trends, source the rarest references in the world and influence the way power players think and buy. We spoke with five of these in-demand entrepreneurs to find out how they shop, which models are hot right now and what’s coming next. 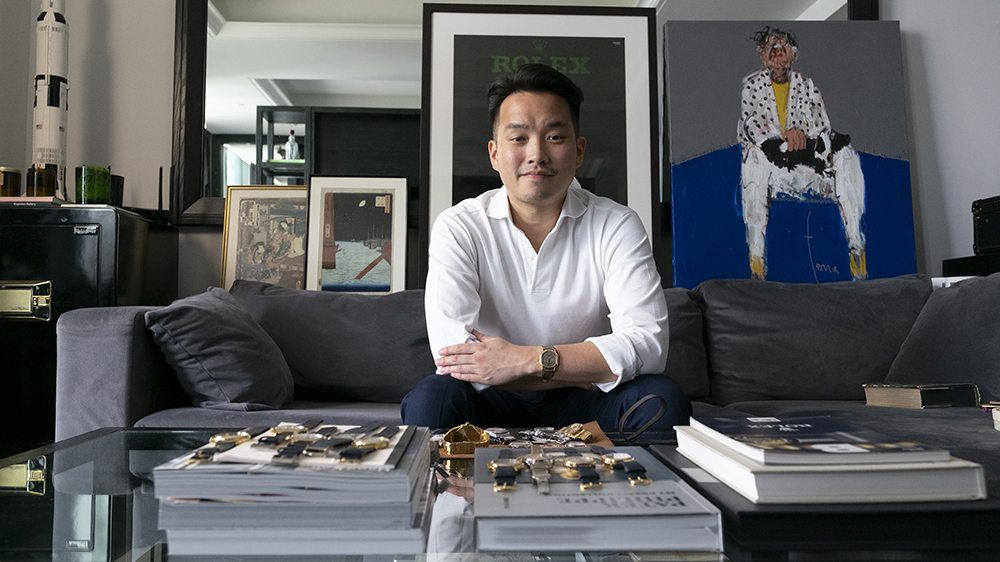 Watch dealer Sean Song with some of the goods in his space at the St. Regis Kuala Lumpur, Malaysia. Song wears a Daniel Roth C127 Retrograde.  Lucas Veuve

Described by fellow industry insiders as “the only watch dealer with an address at the St. Regis,” 28-year-old Sean Song certainly has one of the most elegant showrooms for scarce wrist candy, including such rarities as an F. P. Journe Tourbillon Souverain Régence Circulaire (one of 20 made), a Daniel Roth Seconds at Six with a salmon dial and a Cartier Tank Louis Collection Privé Wandering Hours. “The good thing about being in a hotel is that there is security,” says Song. “Usually, with new clients I meet them downstairs first, and then, once I get to know them, I feel more comfortable.”

Song doesn’t trade exclusively at the high-priced echelon. “I tend to buy what I like,” he says. “Recently, I bought and sold a vintage stainless-steel Girard-Perregaux Triple Calendar with Breguet numerals, and it was only $3,000. I was like, ‘I can’t resist this.’ ”

Before he was dealing in marquee names, he was studying graphic design in London, where he scoured eBay for noteworthy finds below $100. He also started writing about watches, hanging around old-school dealers and dabbling in dealing himself. He decided to make horology his full-time gig after buying a WWII-era Cyma issued to the British Armed Forces for about $770 and selling it for $1,235. “It was in perfect condition, but at the time it wasn’t very popular. No one really knew about the ‘Dirty Dozen’ watches,” Song says, referring to models from 12 companies commissioned by the British military during the war.

When he started S.Song Watches back in Kuala Lumpur in 2017, he specialized in chronographs from the ’40s and ’50s, in addition to ’60s sport models. Now, he also handles coveted Audemars Piguet Royal Oaks and Patek Philippe Nautiluses and has progressed to newer models. “The thing that really gets me excited is neo-vintage stuff,” says Song. “I’m interested in those old, rare Cartiers from the ’90s, [Roger] Dubuis, Daniel Roth, which also leads to independents. I think that’s much more exciting than selling a [Rolex] Daytona every week.” 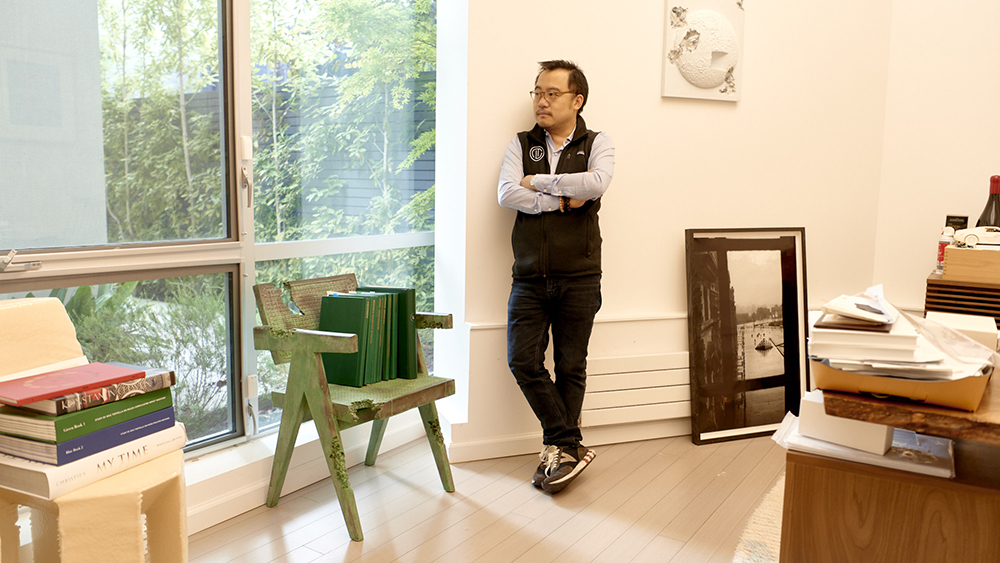 Eric Ku of 10 Past Ten is widely considered one of the kings of vintage Rolex. A horology buff since childhood, he would often unload one watch in order to buy another. His first Rolex, purchased while he was at UC Berkeley, was an Air King, which would look downright entry-level next to the mint-condition “Paul Newman” Daytona that now graces his wrist.

His learning curve as a wheeler-dealer, however, was steep. He had to part with some early acquisitions to pay for a stock-market blunder: Using his tuition money, he plowed $30,000 into eBay’s IPO in 1998, at $50 per share. After the stock swiftly rose to $300, he shorted it—so sure of his bet that he put a down payment on a Porsche. He lost the whole investment when eBay climbed to $700. “That first Rolex? I sold it because I was subsisting on Noah’s Bagels for several months until I got the courage to ask my dad for more money,” Ku recalls. And he never got the keys to that Porsche.

Ku quit his last “real” job in 2005 to deal full-time, mostly on the Vintage Rolex Forum (a website he took over in 2014). But with social media in its infancy, the game was about to change forever. “The horizons broadened and there were just more people interested in vintage watches,” he says. By 2009, he was able to buy back his Air King from the client who’d taken it off his hands a decade earlier, though for a “silly amount of money,” he says.

Now, unicorns such as a one-off Rainbow Daytona, commissioned in 1999 for a Middle Eastern collector, trade through the 42-year-old’s hands for astronomical figures. He snagged the Rainbow for $700,000, approximately 10 times its asking price on the secondary market seven years earlier. “I sold it for more, obviously,” he says.

As far as the “Crowns” on his site 10 Past Ten, you have to act fast: Clients are lightning-quick to snap them up. His solution? Loupe This, a new auction site he cofounded, aims to even the playing field. Daily curated sales have opening bids from $5,000 to $300,000 and no reserves. Ku says it will be a while before the site starts selling million-dollar pieces before adding, “We’ll be there sooner than later.”

“The Rolex Ref.1501 and 5500 with plastic crystal are real sleepers that are very cheap still,” says Ku. 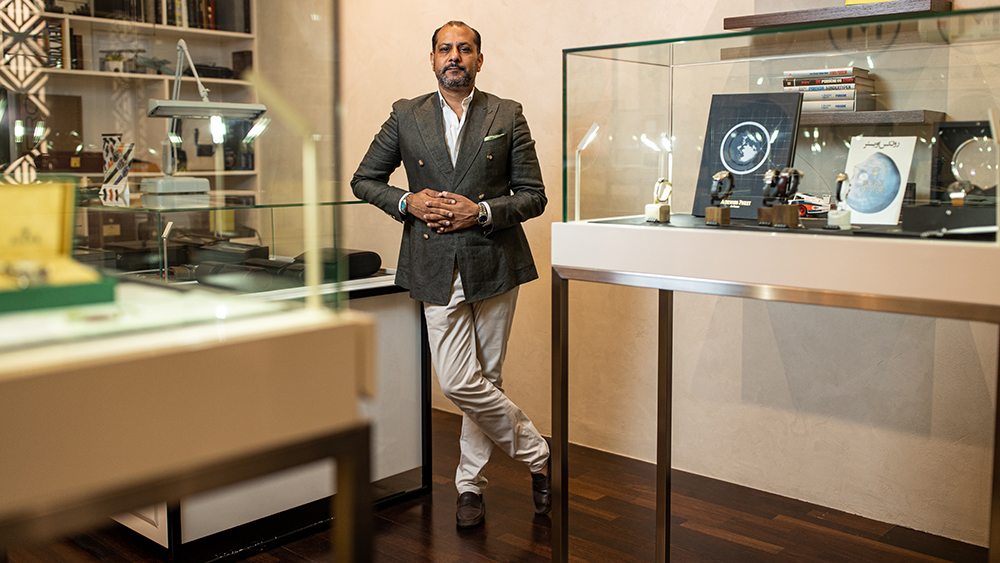 As a teen, Tariq Malik says, “I was not really into watches.” That may be an understatement: “I had a plastic calculator watch.” But at 16 he found himself dealing in Swatch watches in his hometown of Aachen, Germany.

After running a jewelry boutique with his twin brother while at university, Malik landed a gig in the telecom business that sent him to Dubai several times a year. It became the catalyst for his move to the sprawling metropolis filled with big skyscrapers and even bigger money.

“At the beginning of January 2011, I took all the money I had and a suitcase, and I knocked at my friend’s door,” says Malik. “I said, ‘I’m moving in now. Let’s do something.’ ” Nine months later he opened Momentum Dubai, the emirate’s first dedicated vintage-watch destination. His inventory of about 60 models sold out in just two months.

Still, he operated by trial and error at the beginning. The storefront, located in the Dubai International Financial Centre, launched with 15 brands, including Omega, Heuer, Bulova and Breitling. But Rolex has become its bread and butter, accounting for roughly 90 percent of the business. “This is how we got there: by doing what our clients want to see,” says the 46-year- old Malik. A recent crowning achievement was a Rolex Daytona Ref. 6263 outfitted with the UAE Ministry of Defence coat of arms in lieu of the brand logo, which sold for $350,000.

While he deals in big-league “Rollies,” Malik says Rolex Day-Dates are his personal preference. “We had a little bit of a hand in creating that trend around the Day-Date, a slightly forgotten watch among collectors,” compared to Daytonas, GMT-Masters or Submariners, says Malik. The vault stows anywhere from 20 to 30 at a time, each distinguished by a special detail not typically seen in large-production editions. During a year when even a DateJust is hard to come by in a Rolex boutique, Malik might be onto something.

“The Daytona is very volatile,” says Malik. “We’ve had ups and downs in the last three years. If you say Daytona is rare, I would say it’s a lie, because whenever you want to buy one, you can find one. 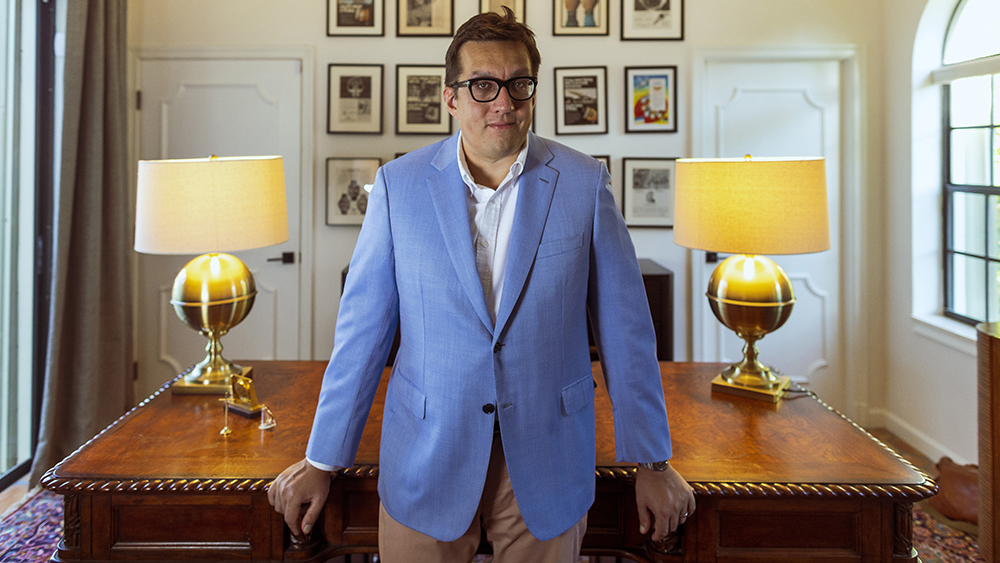 Eric Wind’s first major deal since founding Wind Vintage four years ago was for a Rolex Big Crown “James Bond” Submariner Ref. 6538 with a brown “Tropical” dial—considered a holy grail by most collectors. He is mum about the price, but a similar model hammered in for $567,000 at Phillips the same year. Suffice to say, Wind’s was way outside the realm of a novice’s transaction.

But Wind was no beginner. Respected since his days as a freelance watch writer (while earning an MBA at Oxford), he landed at Christie’s in 2015 as a senior specialist. “I was like, ‘What’s the worst that could happen? I’ll have worked for Christie’s, have a great name and title on my résumé, and I can always go do something else,’ ” says Wind. After a two-year stint, he ventured out on his own.

The 35-year-old Wind has quickly become one of the most sought-after dealers in the US. He can now charge collectors a hefty hourly fee for advice or watch hunting.

Wind is known for capturing rare finds and also specializes in Audemars Piguet and Vacheron Constantin, as well as Omega, Heuer and Longines. Thanks to an early career in international politics, he has a certain affinity for presidential timepieces: Lyndon B. Johnson’s Benrus, Dwight D. Eisenhower’s Bulova chronograph and a Rolex GMT-Master II Ref. 1675 owned by Mexico’s José López Portillo have all passed through his hands.

Wind plans to remain as in-demand as his merchandise by staying a solo act. “That’s why I started as a dealer,” he says. “There’s room for an expert and working one-on-one.” He cites art advisers as his model. “You’re not hiring a big firm; you’re hiring a person.”

Speaking of the Vacheron Constantin Ref. 4217 and Ref. 4301 mentioned above, Wind advises, “they only made a very small batch of each type of dial for each reference, so it is hard to find more than a handful of a single type in existence. 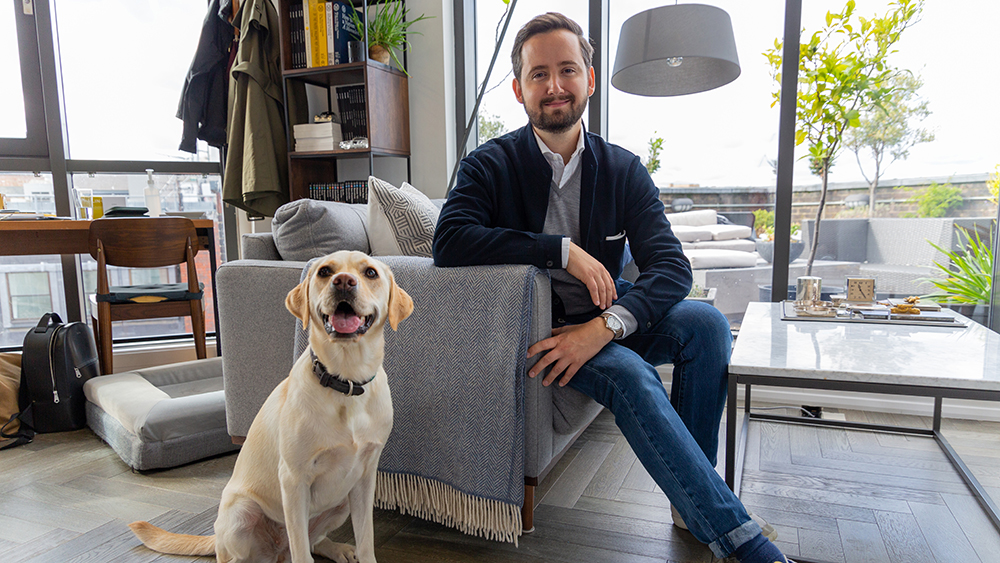 Silas Walton at A Collected Man’s office with his Labrador, Annabelle, and a Rexhep Rexhepi Chronomètre Contemporain on his wrist.  Hanna-Katrina Jędrosz

Silas Walton counts Philippe Dufour, Roger W. Smith and Kari Voutilainen, to name a few, as close friends and has become one of their most trusted dealers. “I spend a lot of time making sure I keep those relationships strong,” he says. And with good reason: These innovators’ prices have soared, in some cases well into the multimillions, in recent years.

Some of those figures can be attributed to the 34-year-old Walton, who came to the field in a round-about way: He blew some early paychecks from his first post-university job on a Cartier Tank and a Longines Conquest and later needed to unload them. “It was such a Wild West, the pre-owned world,” he says.

Walton started his business, now called A Collected Man, in 2014. A family friend consigned two pieces that turned out to be life-changing: Kari Voutilainen’s first-series Observatoire and a Roger W. Smith Series 2—both models that aficionados could only dream of acquiring now. “We were not in the era of independent watchmaking that we are in today, where these things are white-hot,” says Walton, noting that collectors were taking substantial losses on similar timepieces. He sold the Voutilainen for about $87,800 and the Smith for around $200,210, both comfortably above retail value.

Those returns earned the watchmakers’ stamps of approval: He quickly became the first and only approved pre-owned reseller for Dufour, Voutilainen and Smith. Lately, he has turned his attention to up-and-comers, including Akrivia and Petermann Bédat. And he’s banking on a surge in interest for neo-vintage examples from the ’80s to the early 2000s from established players such as Patek Philippe and Vacheron Constantin.

Recent sales suggest top niche makers are still his honeypot. Case in point: A Collected Man made headlines in August for the $7.63 million sale of Dufour’s Grande et Petite Sonnerie—the most expensive timepiece by an independent maker ever sold.

Patek Philippe Ref. 3940 models “don’t generally trade for more than $70,000,” Walton says, “even though they are not that far removed from the best watchmaking 40 or 50 years earlier from the same brand that would go for considerably more.”