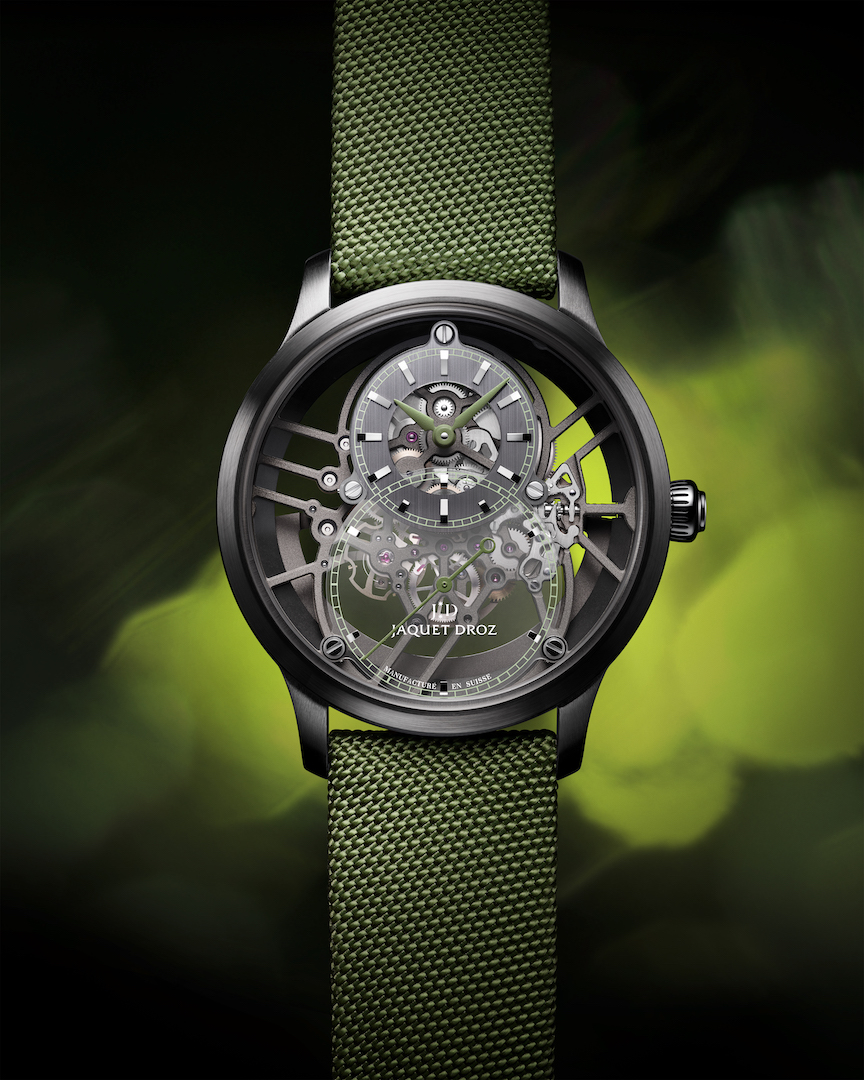 If you’re looking for a shot of spring in your choice of timepiece, the new Jaquet Droz Grande Seconde Skelet-Ones will fill the bill. These limited edition timepieces—in three variations comprising just 28 pieces each—have all the gravitas we’ve come to expect from this La Chaux-de-Fonds maison, but with a touch of fancifulness in their design.

Jaquet Droz’s first foray into skeletonized movements debuted with the first Grande Seconde Skelet-One, introduced in 2018. These three new models slated for 2021, with green, sky blue or yellow detailing, retain the charm of the originals, yet offer a new look that is at once modern and bold. Each color is evident on the watch hands, the textile straps (handmade) and the rail track hugging each of the two subdials that compose the signature Grande Seconde “figure eight.” These bits of color are enough to grab one’s attention without overwhelming the inherent dignity of the timepiece. 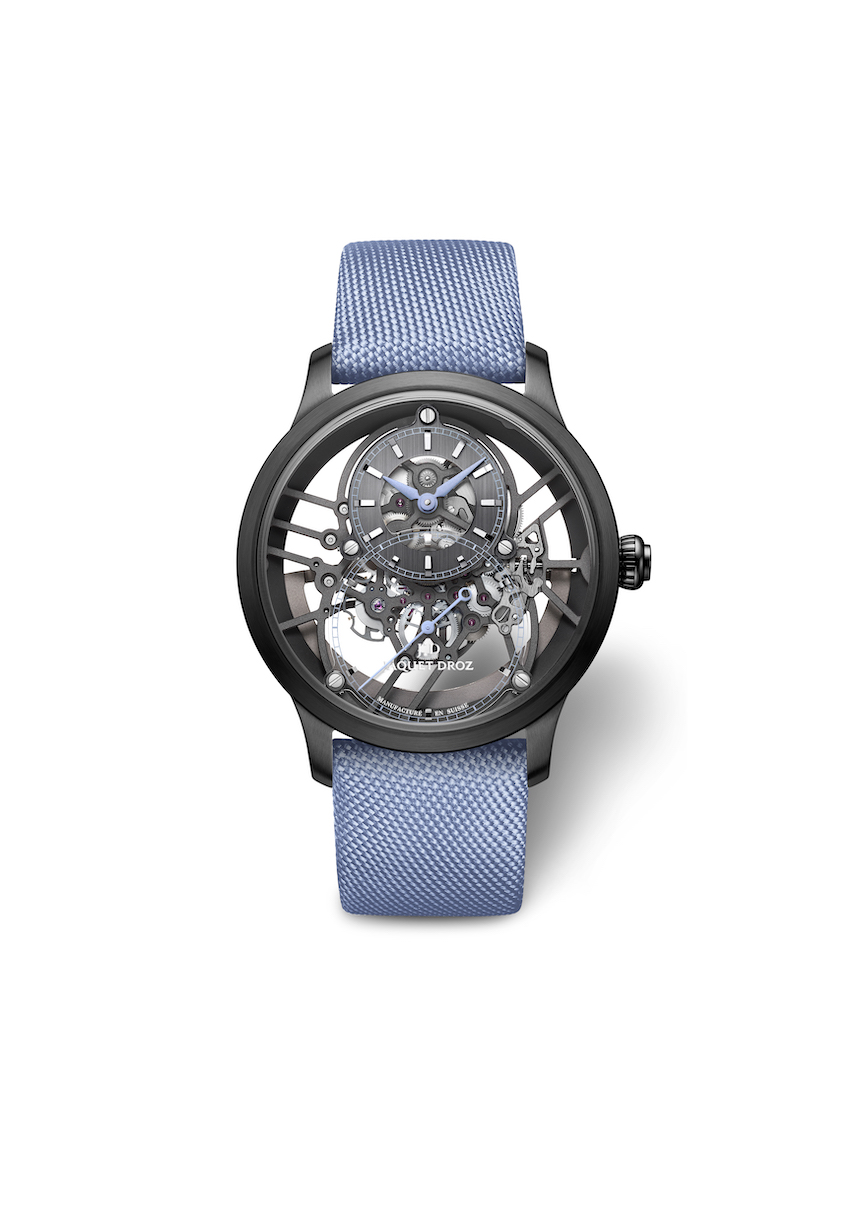 Much of the charm of the Jaquet Droz Grande Second is, of course, in its clear sapphire dial configuration, with hours and minutes displayed on the upper part, and seconds counted at the bottom. Here once again, a large seconds hand soars at 6 o’clock to create the illusion that it is floating, while directly below it, respective aspects of the handcrafted movement may be admired from the front and back.

The movement features a silicon balance spring and pallet lugs, a double barrel with nearly three days of power reserve (68 hours), and an openwork oscillating weight in 18-karat white gold. 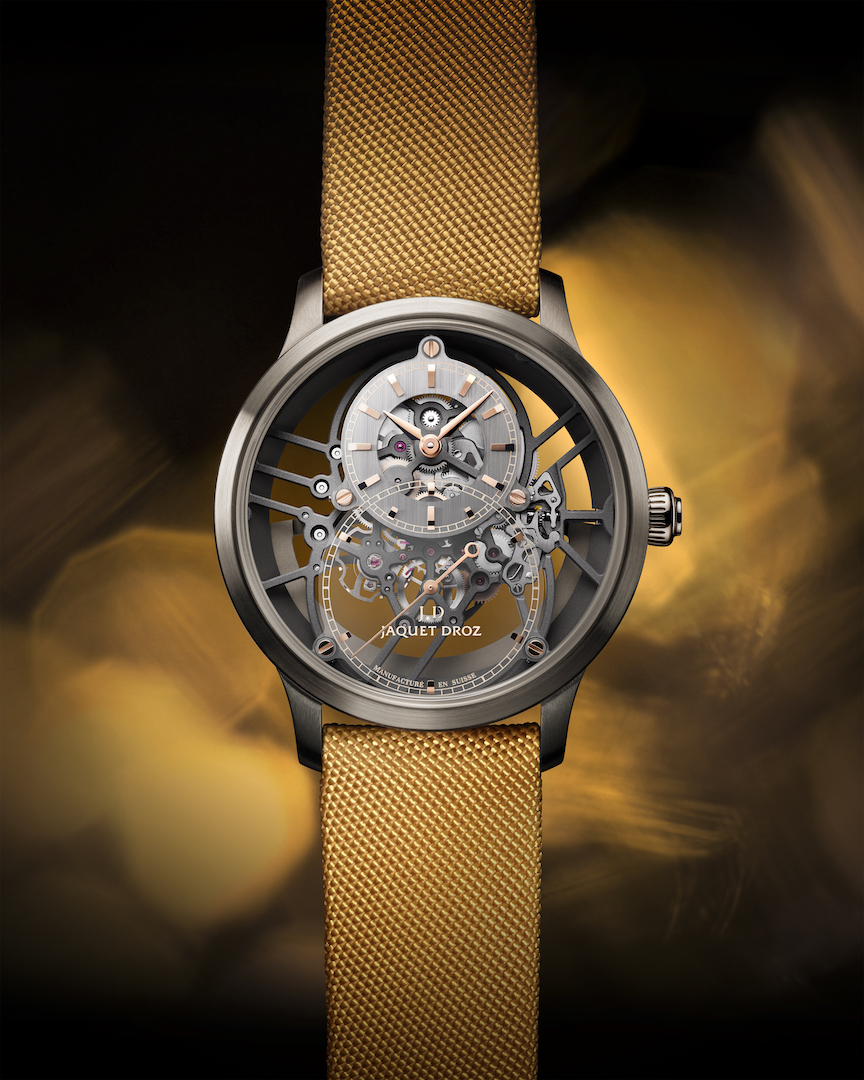 Jaquet Droz Grande Seconde Skelet-Ones offer a bit of color on the dials and strap.

The watchcases are 41mm and are crafted from black ceramic in the instances of the green and sky-blue models; the indexes and screws on these versions are in 18-karat white gold. The yellow version has a plasma ceramic case that exudes a soft metallic hue—a “color that that occurs at a molecular level,” according to the brand. The indexes and screws on this model are in rose gold.

A note here about these accent shades: They are somewhat unusual in the world of watches and, in this way, lend an attitude of cutting-edge stylishness to the pieces. The green may best be described as a deep grassy green, as opposed to the usual British racing green most often seen in watch collections. To my eye the sky-blue comprises a very subtle whiff of purple—a nice departure from the usual (mostly navy-ish) blues. The yellow is a warm, toasty tone that complements the bits of rose gold unique to this variation. Each of the versions retails for $26,300. 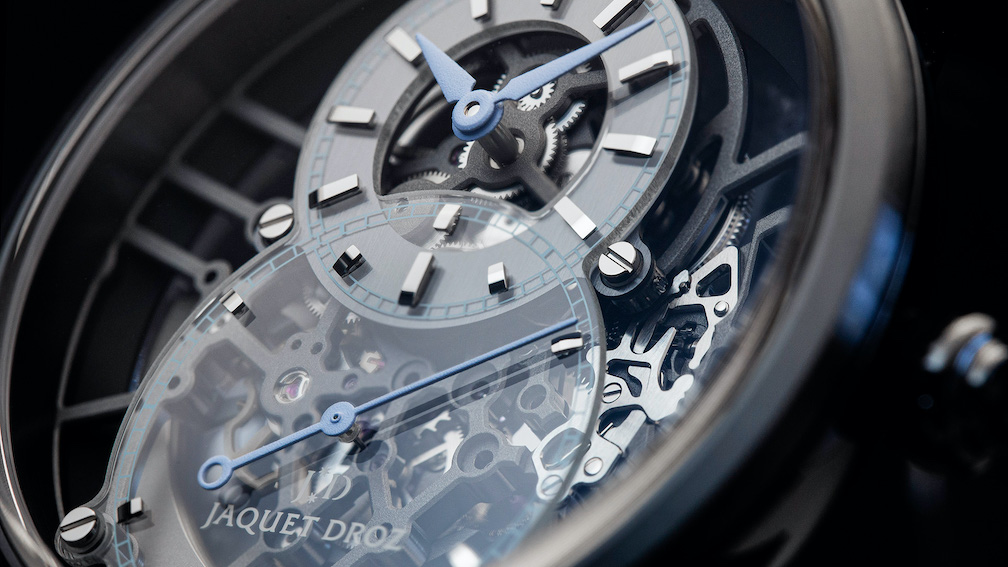 The seconds hand disk is crafted in sapphire.