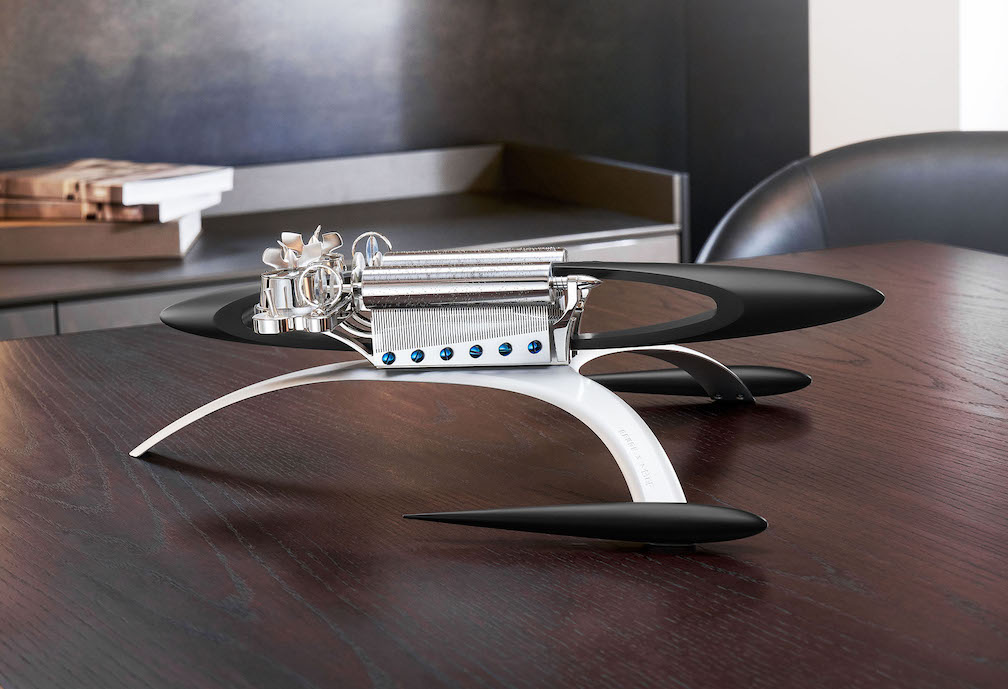 It was nine years ago that innovative Swiss independent watch brand MB&F teamed with the well-respected Reuge music box maker to unveil the MusicMachine 1 space-inspired music box. Now, the two brands release the newest co-creation: the MusicMachine 1 Reloaded. The three-dimensional music box not only defies tradition in looks and design, but also in materials and in the songs it plays.

The Reloaded iteration is still in the form of a spaceship (one of Busser’s favorite concepts) with dual propellers and twin silver cylinders, but it is more streamlined and boasting a few new tweaks. It, like the original, also plays three tunes each on each of the cylinders. For this iteration, Busser selected the Star Wars theme,  as well as Imperial March from The Empire Strikes Back and the Star Trek theme song. They play on one cylinder, while, for the return to Earth, the second cylinder plays Pink Floyd’s “Another Brick in the Wall,” John Lennon’s “Imagine,” and Deep Purple’s “Smoke on the Water.” 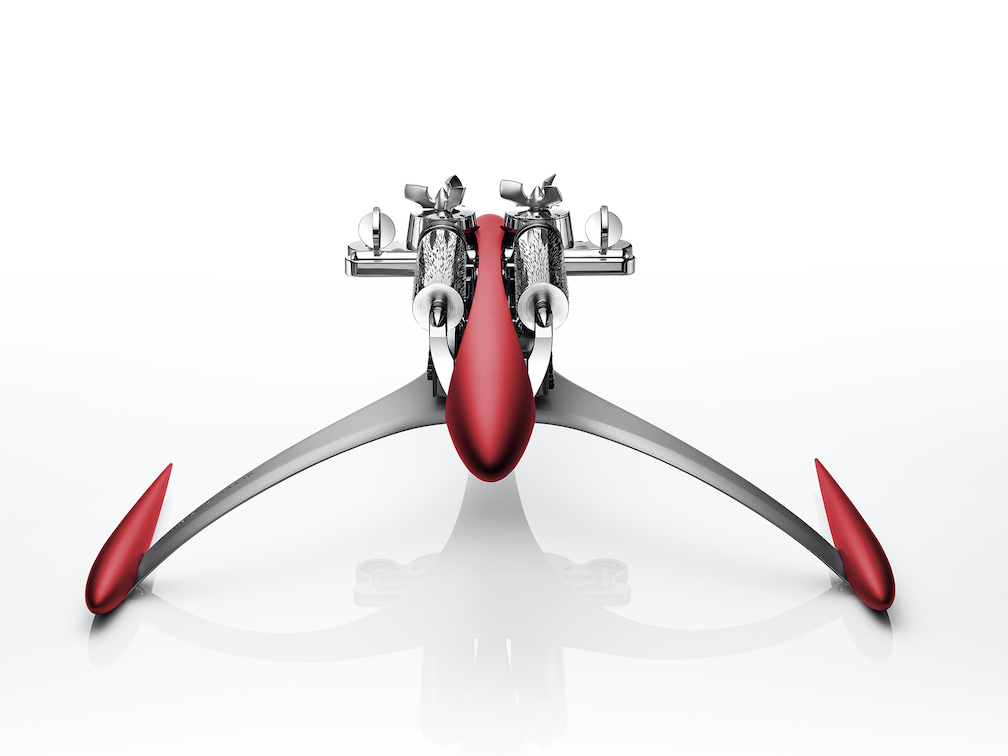 For the design of the original MusicMachine, the team worked with Chinese designer Xin Wang, but for the Reloaded edition, they turned to Maximilian Maertens, who opened up the design more and added a few minor twists like opening up the wings and making them more aerodynamic. Additionally, the body of the spaceship is now made of anodized aluminium instead of wood so that it is more futuristic and sleek. This is a super-cool look and really showcases the cylinders and their thousands of hand-placed pins.

Maximilian Busser, who is the mind behind MB&F (Max Busser and friends) and its horological 3D watches, continues to be fascinated by the art and technical prowess of making a mechanical music box. It requires precision, perfection and innovation – just like watchmaking. As such, the two companies have teamed up before and will continue to work together, with the MusicMachine 1 Reloaded marking the most current.

MB&F X Reuge MusicMachine 1 Reloaded in blue. Just 33 of each of the three colors will be made.

Like a timepiece, the MusicMachine 1 Reloaded requires energy to turn the combs and play the music. It gets that energy from coiled springs that unwind at a carefully regulated speed. In fact, the fan regulators in the music box work similarly to those in a minute repeater. And, like creating one of the most complicated watches, building the combs for the music box is no easy feat. In fact, the two combs, or cylinders, each boast 1,400 tiny pins, precisely placed to strike the steel combs to play one of 72 hand-tuned notes as the cylinders revolve. 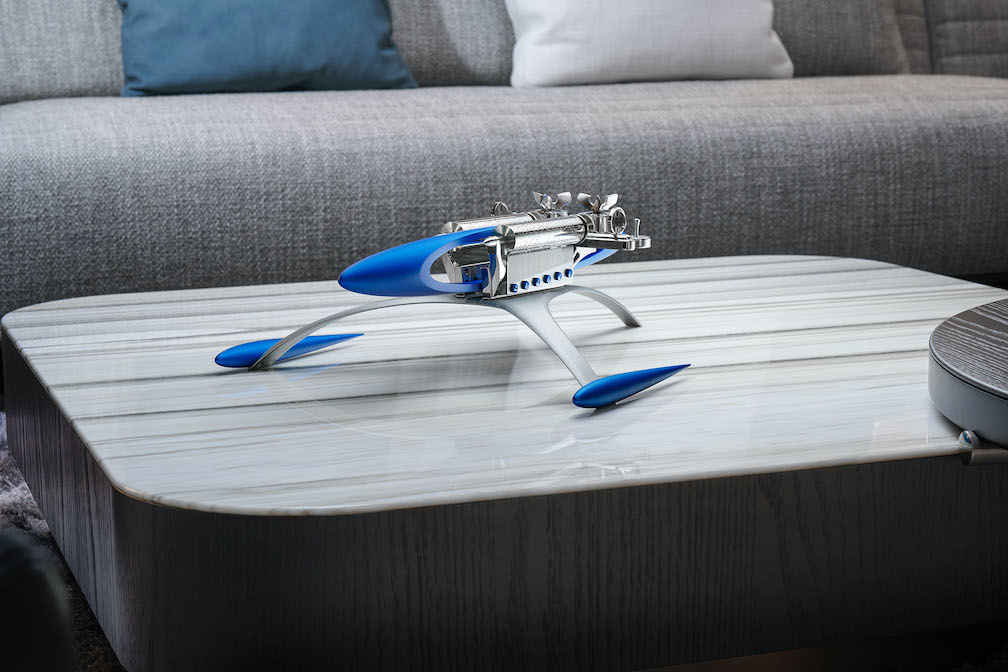 Because of the complexity involved in making the machine, just 33 of each will be made in each of the three colors: red, blue and black. The MusicMachine 1 Reloaded measures approximately 15 inches wide, 19 inches long and about 5.5 inches high. Inside, there are two mainplates, each of which holds a movement consisting of a mainspring, a cylinder, a comb and regulator. Each cylinder is fitted with between 1279 and 1399 pins according to the songs they play, and each of those pins is hand polished and hand applied. The MusicMachine 1 Reloaded retails for about $19,500. 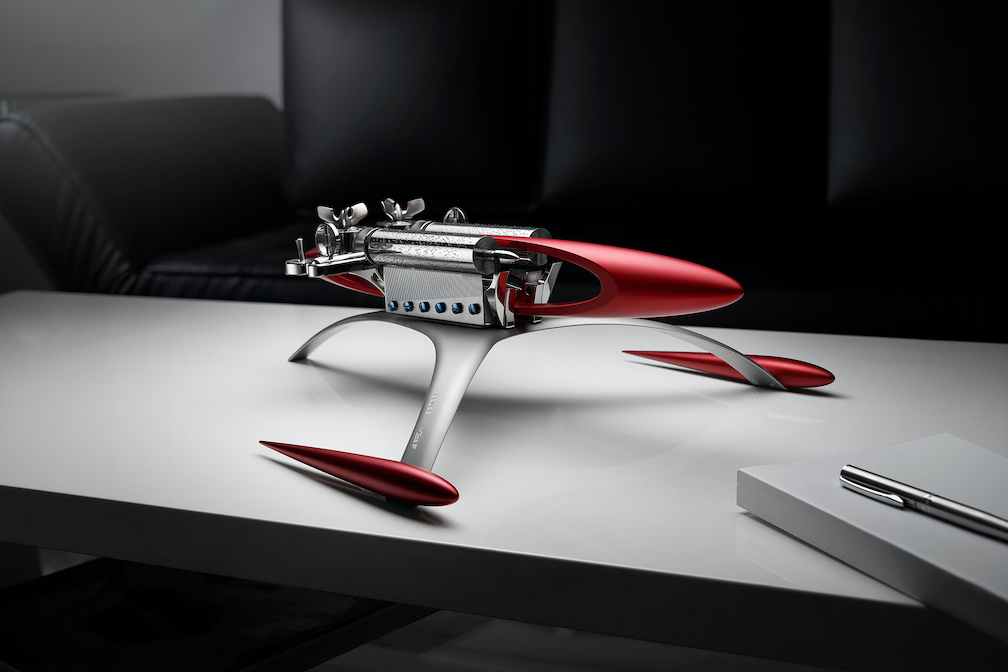 MB&F X Reuge MusicMachine 1 Reloaded is a sleeker, cooler looking spacecraft than the original. Like all things, it has evolved.

“What we have designed now is more complex than the original MusicMachine,” said Max Büsser. “Nine years later, with what I’ve learned, how I’ve evolved, and my tastes have changed, we basically reworked some of the details to have it become what I would want today.