When Christie’s Geneva Rare Watches sale opens on May 9, the sheer number and variety of highlights—including vintage Rolexes, modern Patek Philippes, rarefied Royal Oaks and a Cartier Crash that could set a new benchmark for the model—may surprise seasoned collectors.

“In the past, this sale would have been hard to do because it was the same people buying the same watches,” Keith Davis, head of watches for Christie’s in the Americas, tells Robb Report. “Today, however, the focus is so broadened that you can have many different high-level offerings. Our goal is to speak to a wide group of people in an intense way at the highest level we can.” 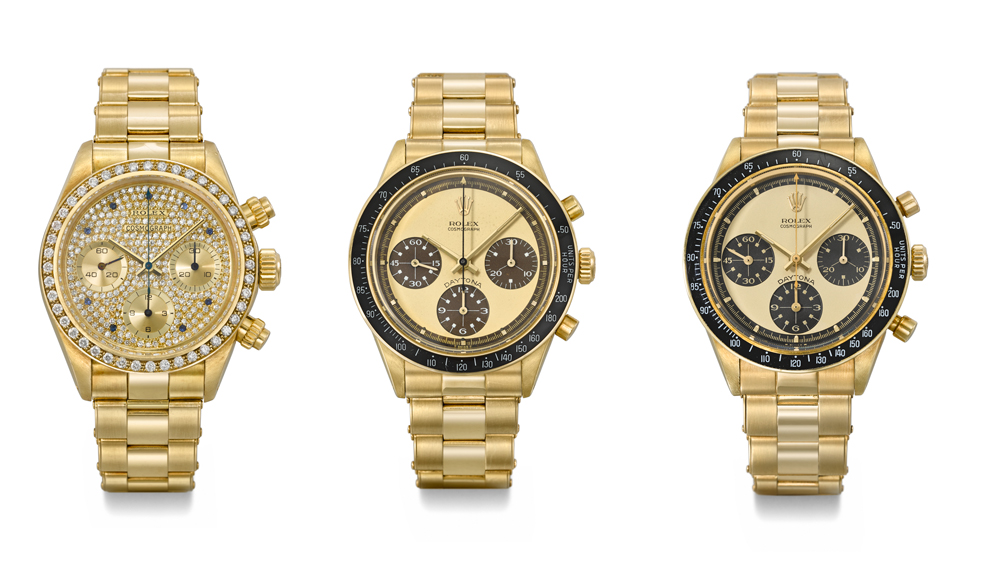 While it’s difficult to single out the sale’s big draw, it’s safe to say that a trio of yellow gold Rolex Daytonas is expected to attract the lion’s share of attention. Never before seen together and at the same time at auction, the trilogy includes a Ref. 6269 “Jack of Diamonds” with a low estimate of 1,100,000 Swiss francs (about $1,167,000), the Ref. 6264 with “Tropical Lemon Paul Newman” dial and the Ref. 6241 with “Champagne Paul Newman” dial.

“One of these maybe comes up once in two years,” says Davis. “To have all three together is quite extraordinary.”

Made for the French market in the mid-1980s, Lot 38, the manually wound 18-karat gold Rolex Cosmograph Daytona Ref. 6269 “Jack of Diamonds” features a diamond-set bezel and pavé diamond and sapphire-set dial. It’s one of only two examples known publicly bearing French importation marks and the Rolex France logo “Sté*R” for “Société Rolex.” Beyond the elusiveness of the reference, the piece bears additional special marks, such as a caseback stamped with the French “owl” importation gold marks and both a caseback and bracelet clasp stamped with the Rolex France Logo.

Lot 129, the 18k gold Paul Newman Tropical Lemon Cosmograph Daytona Ref. 6264 (Est: CHF 900,000-1,800,000) embodies the rarity and singularity of the finest Rolex references. Held by the original owner until around 2012, the piece was acquired by a well-known European Rolex collector and is now regarded as one of the most important gold Paul Newman Daytona wristwatches in existence.

To round out the trilogy, Christie’s is offering Lot 128, the Cosmograph Daytona Ref. 6241 “Champagne Paul Newman Dial” (Est: CHF 700,000-1,200,000). Produced for around three years between 1966 and 1969, the reference 6241 is already rare — that this model appears in 18k gold and bears a champagne dial featuring gilt printing vaults it into a realm of extreme rarity.

Says Christie’s: “The overall appeal of this superb timepiece is completed by the very rare Mark 1 bezel, highly sought-after by collectors.” 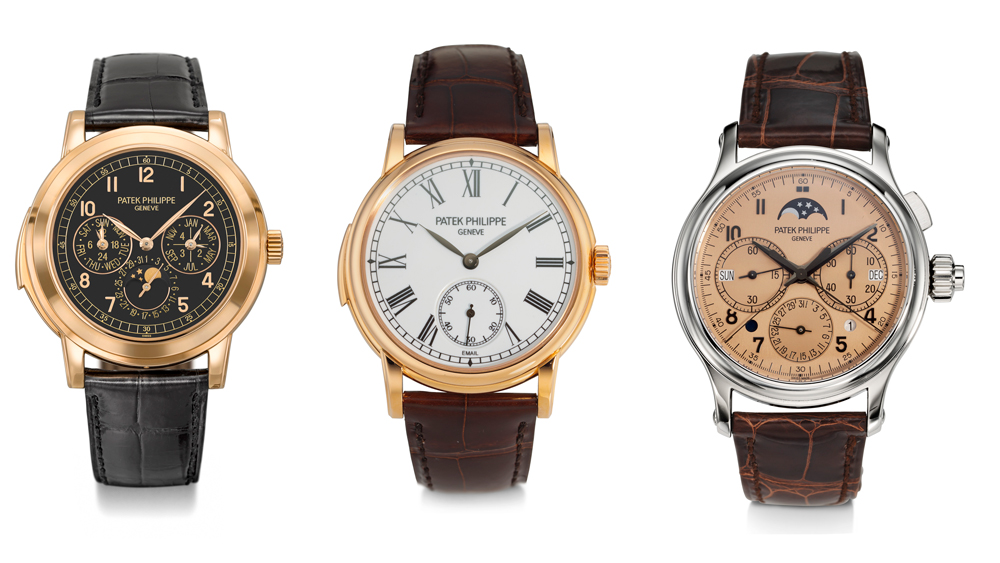 For buyers interested in modern Patek Philippes, there’s the Kairos Collection, touted as “the finest collection of Patek Philippe contemporary timepieces ever to appear at auction.” Christie’s Geneva is selling 30 of the collection’s 128 pieces on May 9. The lots make up part one of a three-part auction that picks up in Hong Kong on May 24 and concludes in New York, in a two-evening sale June 8 and 9.

“The highlights of the Kairos Collection in Geneva are the 5959 split-second chronograph in rose gold, the smallest split second that Patek makes, and the 5074 perpetual calendar minute repeater, which is impossible to get,” says Davis. “All watches are unworn and are part of a single owner consignment. We had 128 of these watches in a single consignment, lots I had never seen in person or even knew existed because they were special commissions. It’s truly the most impressive contemporary collection of Pateks ever to come to auction.” 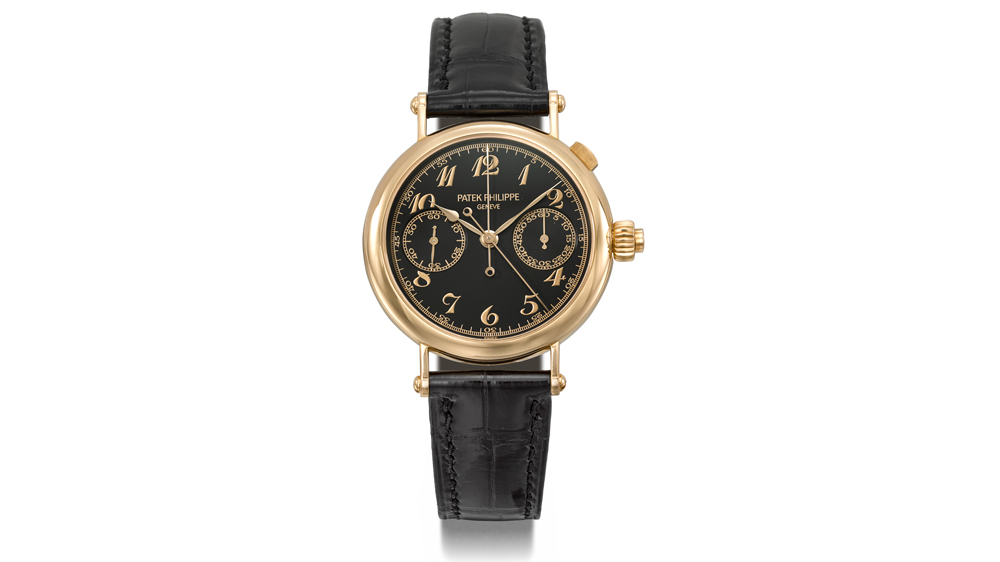 The name of the collection alone conveys the prestige of its holdings. Kairos is a Greek word that means “the right, critical or opportune” moment. “We worked with the consignor to develop the name,” says Davis. “It really speaks to the entire collection.”

Royal Oaks, a Clapton and a Crash 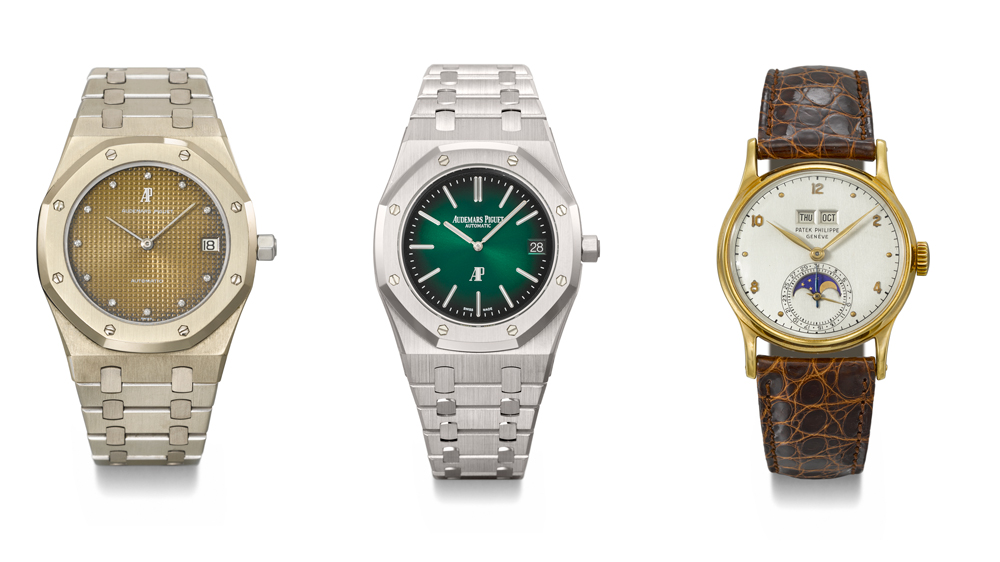 But that’s not all. The Geneva sale also features a robust assortment of vintage and modern Audemars Piguet Royal Oaks, in honor of the model’s 50th anniversary, including Lot 151, a platinum “Jumbo” Extra-Thin Ref. 15202PT (Est: CHF 300,000-500,000), presented for the first time at auction, and Lot 149, a 1970s reference boasting a remarkably tropicalized diamond dial.

“The 15202 platinum with the smoked green sunburst dial is one of the most desirable modern Royal Oaks,” Davis says. “People probably don’t know it exists because they’ve never seen one or even seen a picture of it.”

On the vintage end, the Royal Oak “Golden” Tropical Mark 1 diamond index dial Ref. 5402BC (Est: CHF 200,000-400,000) is the very definition of rare. “To the best of our knowledge, the present watch is the only example of a white gold reference 5402 with diamond dial that is so fully and evenly tropicalized,” according to the sale notes. “The dial is quite sensational and of unparalleled beauty, having tropicalized from the original black to a shimmering golden bronze color fading to leave an even darker outer edge. Adding a further degree of desirability, the dial type is the seldom-seen ‘Mark 1’ that was in use before 1980 on which the round diamonds are set in circular white gold settings. From around 1980 onwards, the round diamonds are set in square-shaped settings.”

Buyers invested in provenance will gravitate to Lot 122, a Patek Philippe perpetual calendar Ref. 1526 (Est: CHF 80,000-120,000) owned by guitarist Eric Clapton, whose excellent taste in timepieces is well documented (during the 1990s and early 2000s, he amassed one of the world’s most impressive and important collections of wristwatches).

“When it comes to Clapton, what a collector wants is the watch and a picture of him on stage wearing the watch,” says Davis. “To have that level of story and provenance, that is the ultimate.” 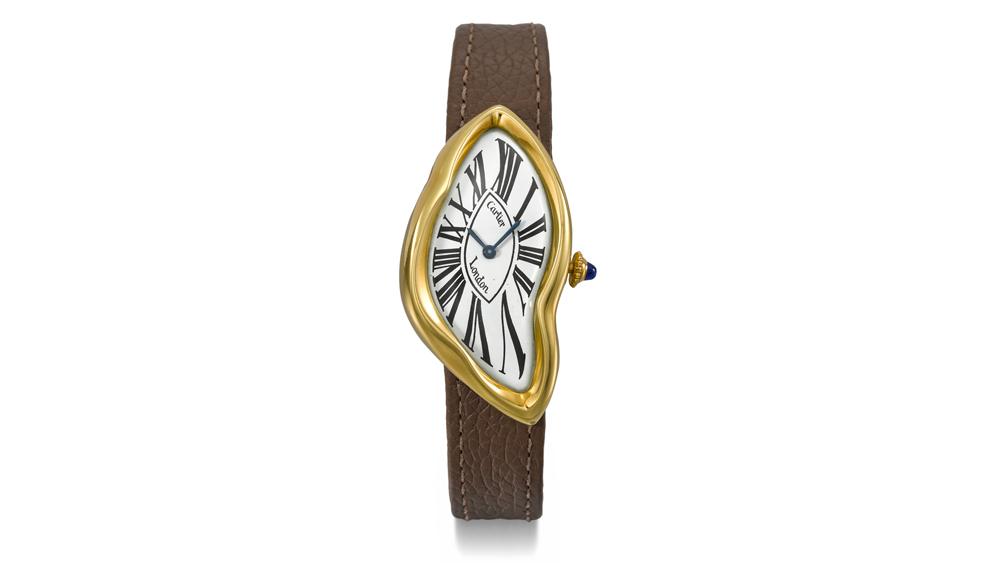 Lovers of Cartier’s shaped watches—notably, the highly sought-after Crash, whose apocryphal origin tale stretches back to London in the mid-1960s and does, indeed, include a car accident—would no doubt agree in the value of a good story. Which may explain why Lot 133, a c. 1990 London Crash, is expected to fetch at least CHF 180,000.

“That’s going to be an important watch and hopefully a new benchmark for that model,” says Davis. “Earlier models from the 1960s are trading for $800,000 to $1 million. We expect an interesting result.” 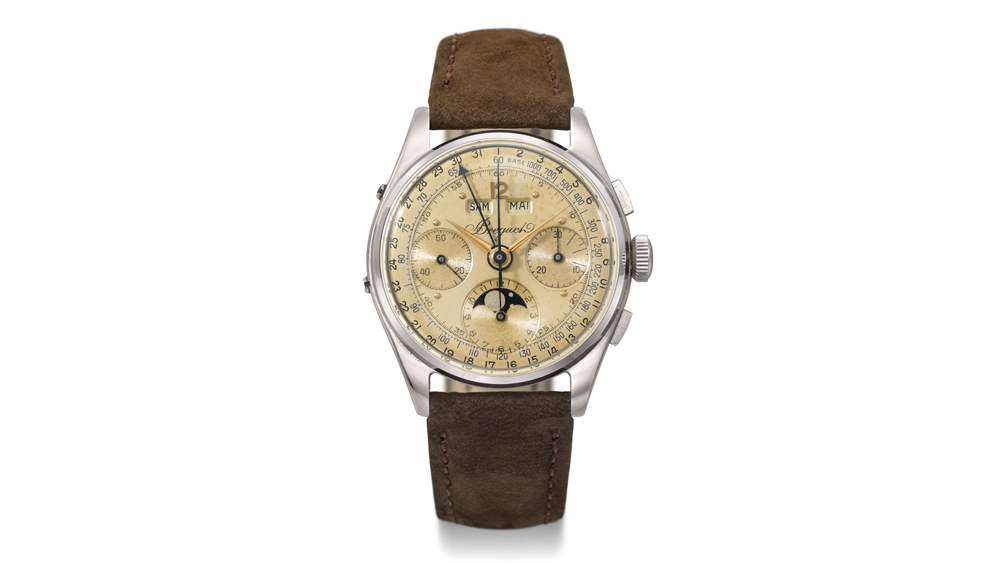 Last but not least, Davis singles out Lot 40, a Breguet No. 2424, an example of one of Breguet’s impossibly rare steel-cased triple calendar chronograph wristwatches.

“You don’t see many Breguet watches from the ’50s and ’60s—Breguet functioned as a brand in those years, but really by special orders,” Davis says. “They had very minimal production and this watch is an example of that. The fact that this watch exists and in this condition is extraordinary.”

The model, which is estimated to fetch between CHF 100,000 and CHF 200,000, is one of less than 10 examples known publicly, and, as such, is guaranteed to appeal to connoisseurs.

“This sale is focused on great stories,” Davis concludes. “We could have put up sale of what’s hot right now, like modern Richard Milles. But that’s not pushing the conversation forward.”