Ultra-thin watchmaking has always been Piaget’s expertise. Since 1874, Georges­ Edouard Piaget had been supplying movements and movement components renowned for their fine workmanship, sophistication as well as thinness to the most prestigious international watchmaking houses.

In 1913, Piaget first began to appear in watch supplier catalogues as the specialist of ultra-thin components. Valentin Piaget took up the baton and pushed innovation to unprecedented heights in 1957 by introducing the 2mm thick 9P movement that caused a sensation, followed by the 12P and its ingenious off-centred 24K gold micro-rotor integrated into the movement plate, which became the world’s thinnest automatic caliber in 1960. It was a milestone in Piaget’s history, technique came at the service of design and enabled the Maison to create elegant and creative timepieces. 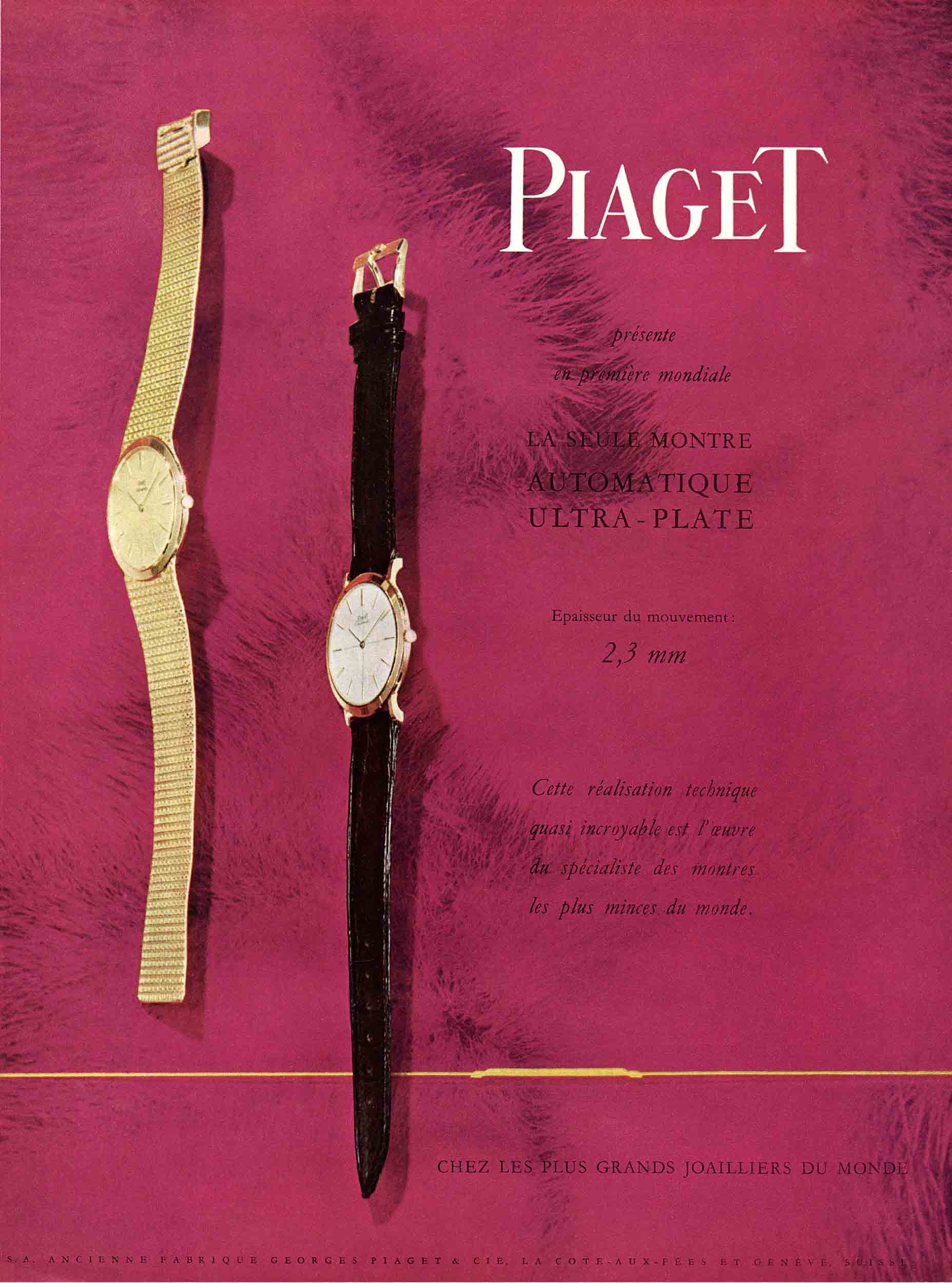 The thinness of the ultra-thin movements offers more space in thickness, allowing for ornamental stones (which are almost four times thicker than gold dials) on the dial. This opened new creative horizons. From then on, everything would start from the dial. It became the centre of the watch, which was soon to explode with colour and radiance with the launch of the ornamental stone dials in 1963.

Buoyed by the extraordinary creative spirit pervading the 1960s, the Maison raised ornamental stones to the rank of precious stones. Colour became the brand signature: jade, coral, lapis lazuli, tiger’s eye and turquoise were incorporated into Piaget’s creations for a dazzling effect. Over 30 different stones spelled the triumph of colour and expressed boundless creativity and a rare degree of technical mastery. 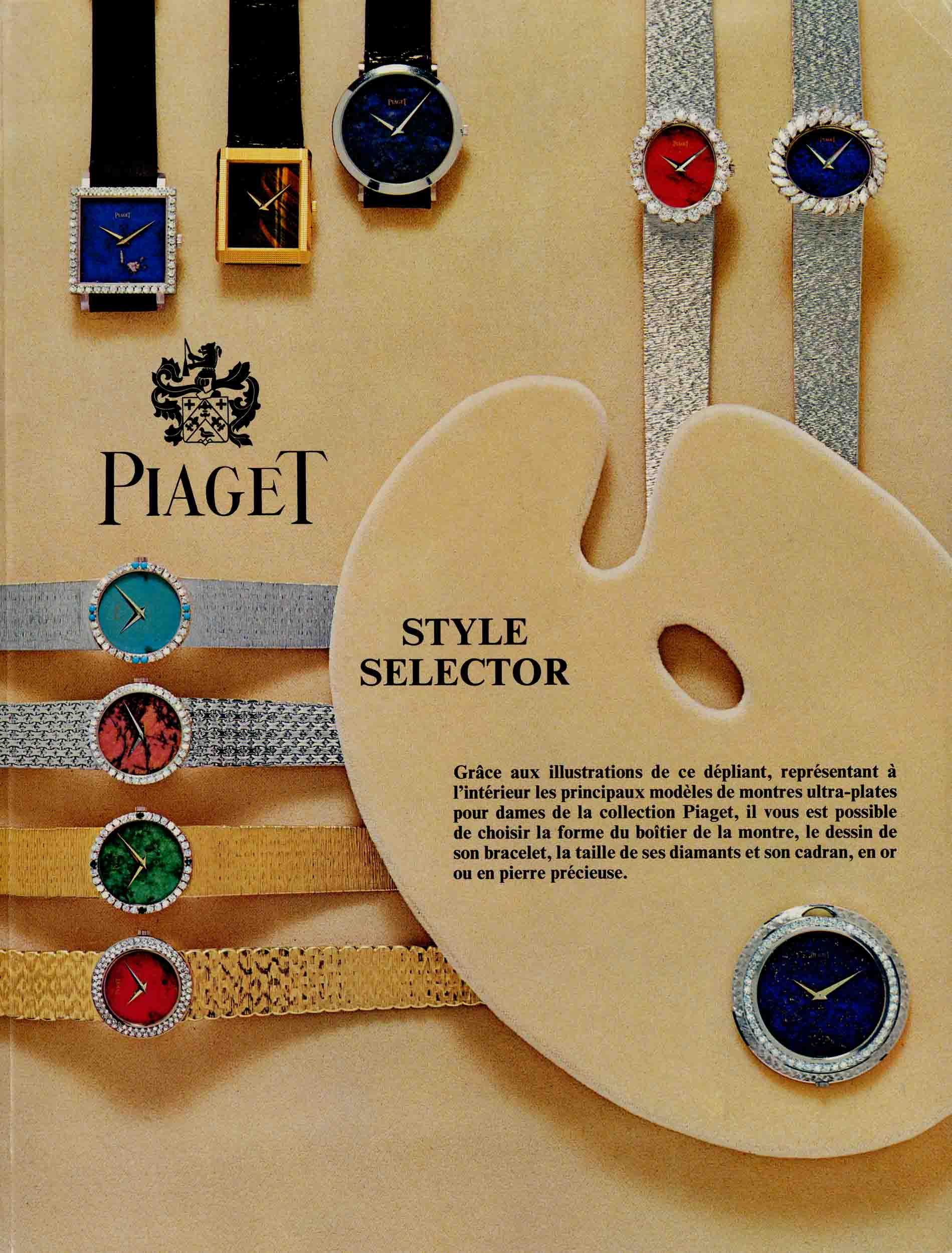 More than ever, quality and craftsmanship formed the very core of these Piaget creations radiating an inimitable sense of creativity. The in-house artisans constantly pushed the boundaries of technical feasibility, whether in creating ultra-thin movement, crafting hard stones to within infinitely small tolerances or making gold bracelets as supple as fabric. The Piaget expertise was thus eloquently confirmed and its vocation as a watchmaker and jeweller truly determined. Piaget Artist of Precious Time exhibition presents how Piaget established itself as the Maison of reference for elegant men’s watches, attracting Cary Grant, Alain Delon and Miles Davis who adopted its refined elegance. 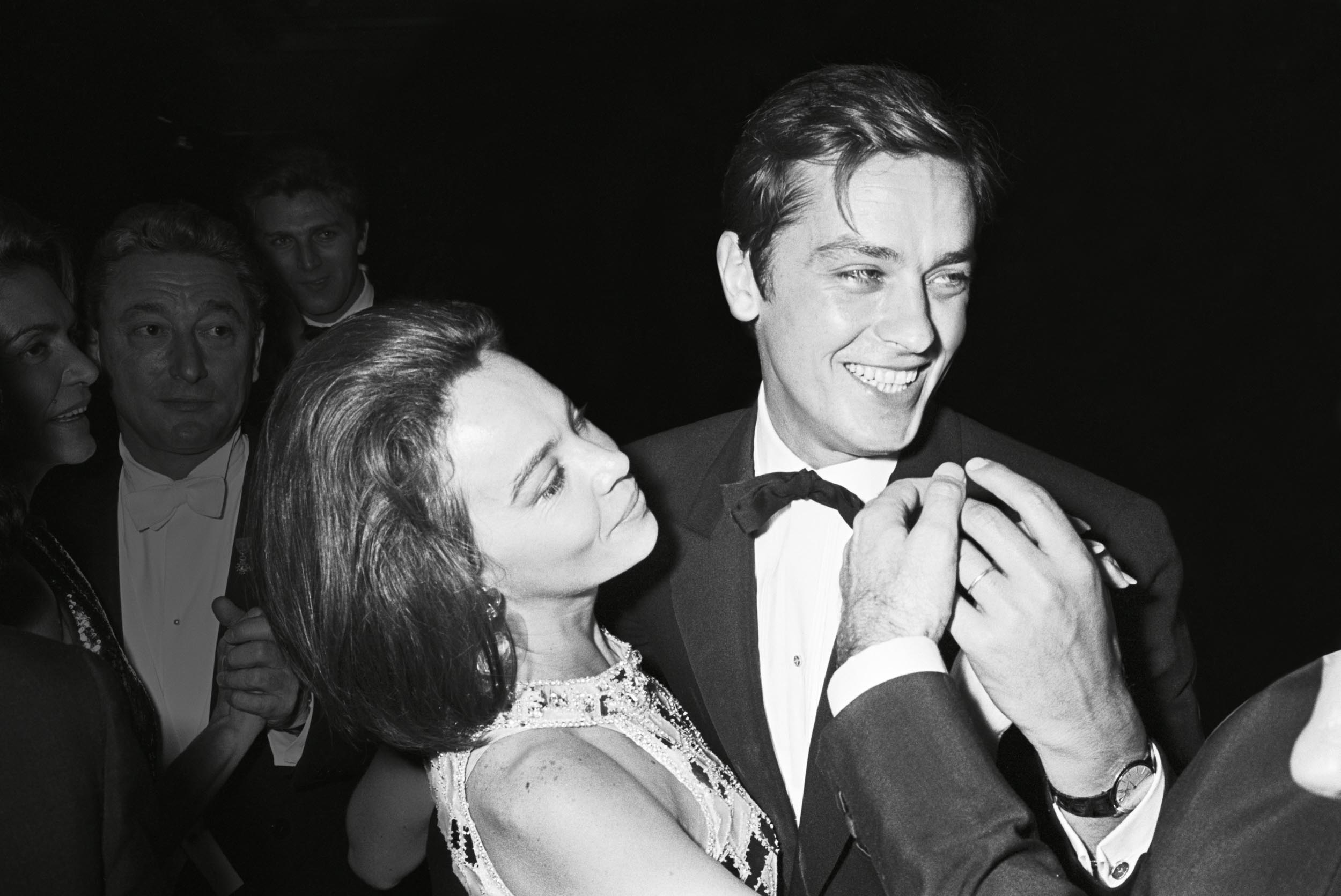 Miles Davis, the legendary American trumpeter composer was a watch collector. Backstage, he had a case for some of his precious watches and he would regularly choose the Piaget Polo skeleton watch to wear before coming on stage. This Piaget Polo skeleton watch was reportedly gifted to Miles Davis on behalf of the Swiss government in appreciation for his contribution to the art of jazz by Claude Nobs, founder of the Montreux Jazz Festival, and subsequently worn by Davis during his last Montreux performance. Miles noted the spectacular design of the watch that infused the telling of time with considerable complexity and exclaimed: “But I don’t care about that. It’s just stunning!” 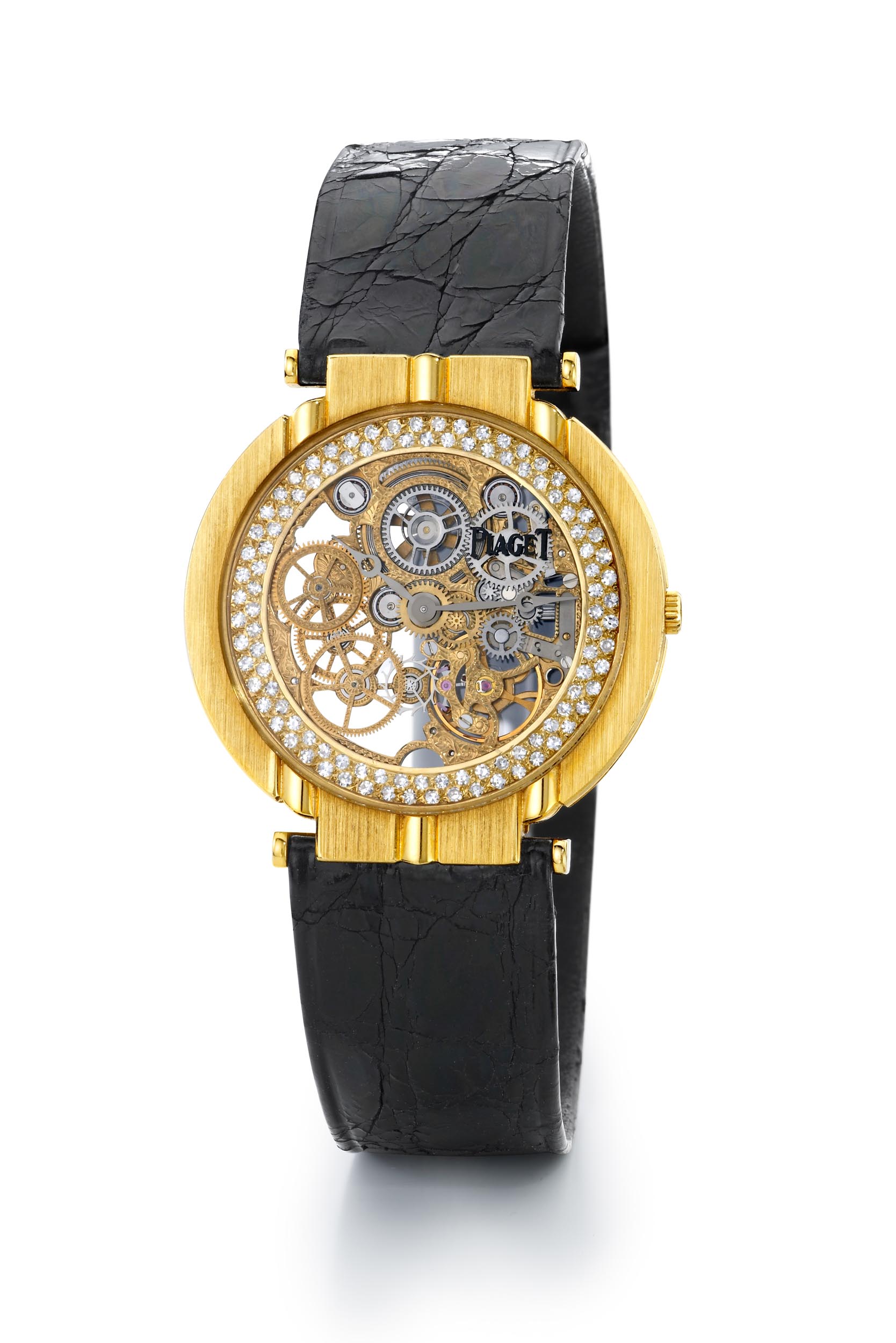 At Piaget, artisans are artists and their creations are presented as works of art. Over the years, Piaget has collaborated with artists as the Maison strongly believes in creative minds and artistic values. Using raw materials and strong craftsmanship, Piaget developed its own style: mastering the work of gold, exploring colours, innovating new shapes, using precious gems and hard stone dials, and regarding them as pieces of art.

“I wanted to show that our watches and jewellery are real works of art, and that the people who make them are real artists.” said Mr Yves.G.Piaget 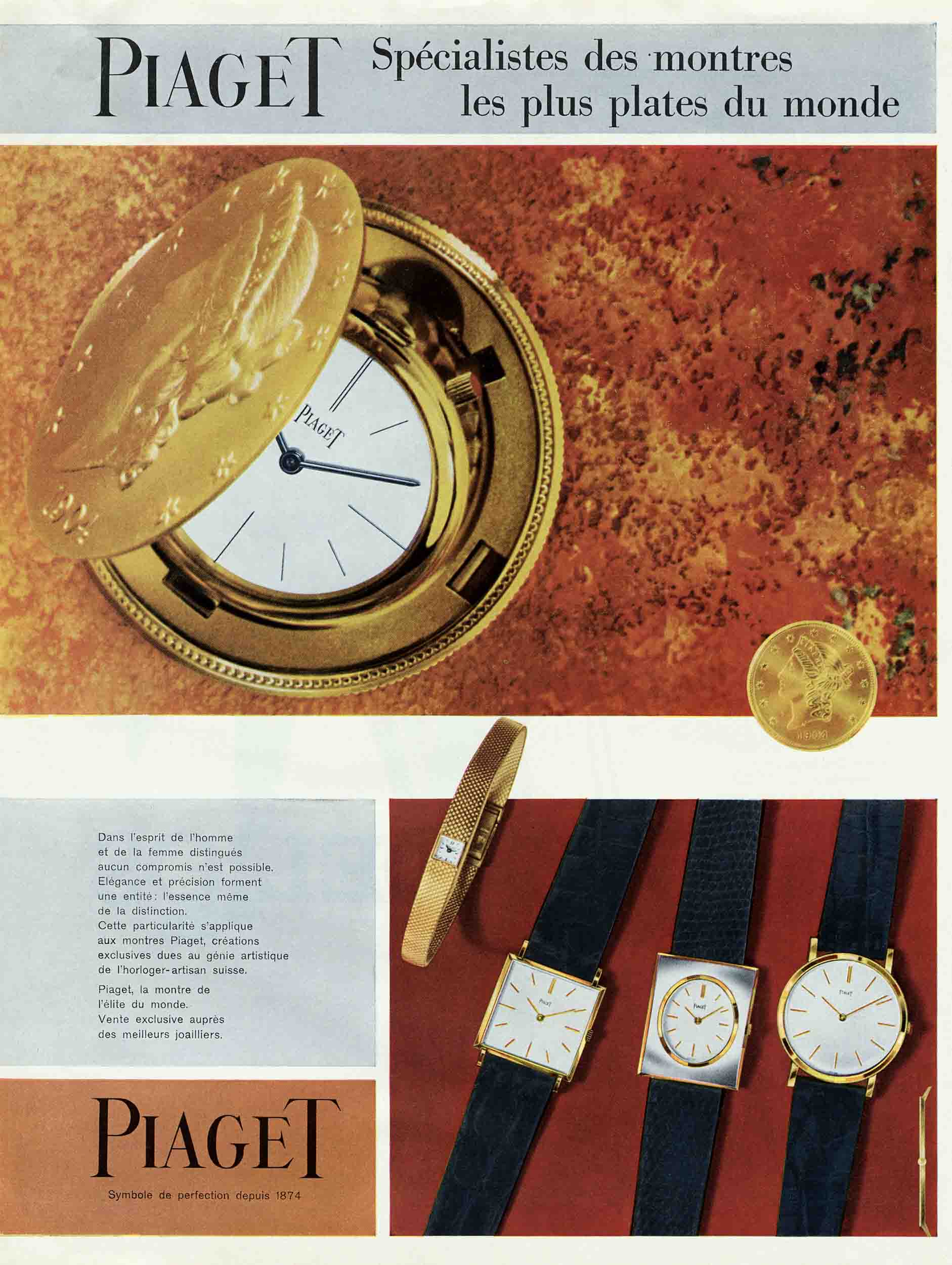 Based on this observation, Yves Piaget developed an extensive personal network with many personalities in the art world at an early stage, weaving special ties with talented people who would leave an enduring imprint on their era. In 1967 Piaget had famous French singers Maurice Chevalier and Mireille Mathieu give private concerts in Gstaad or St. Moritz. Yves Piaget was only 25 years old but the friendships he forged with such personalities gave rise to what is now known as the Piaget Society. Clients became friends and friends became clients.

Soon enough these connections with famous artists gave rise to unique and timeless pieces. Piaget Artist of Precious Time exhibition highlights personalities who have been seduced by the avant-garde and audacious style of the Maison, such as Elizabeth Taylor, Ursula Andress, Andy Warhol, Alain Delon, Miles Davis, Richard Avedon, as well as icons such as Jackie Kennedy and Salvador Dali.

Andy Warhol raised pop culture images to the rank of universal works of art. In parallel, he decided to store fragments of his life as part of an archiving approach that was both private and artistic. The curator of the Pittsburgh Museum dedicated to him has faithfully safeguarded cardboard boxes filled with these “relics”, including traces of a several year-long friendship with Yves Piaget. Hand-written notes, invitations to Piaget parties, empty chocolate boxes… For Andy Warhol, these “Time Capsules”, as he called them, deserved to find their way through the years. He found in the Piaget creations 7 pieces which matched his personal extravagance. 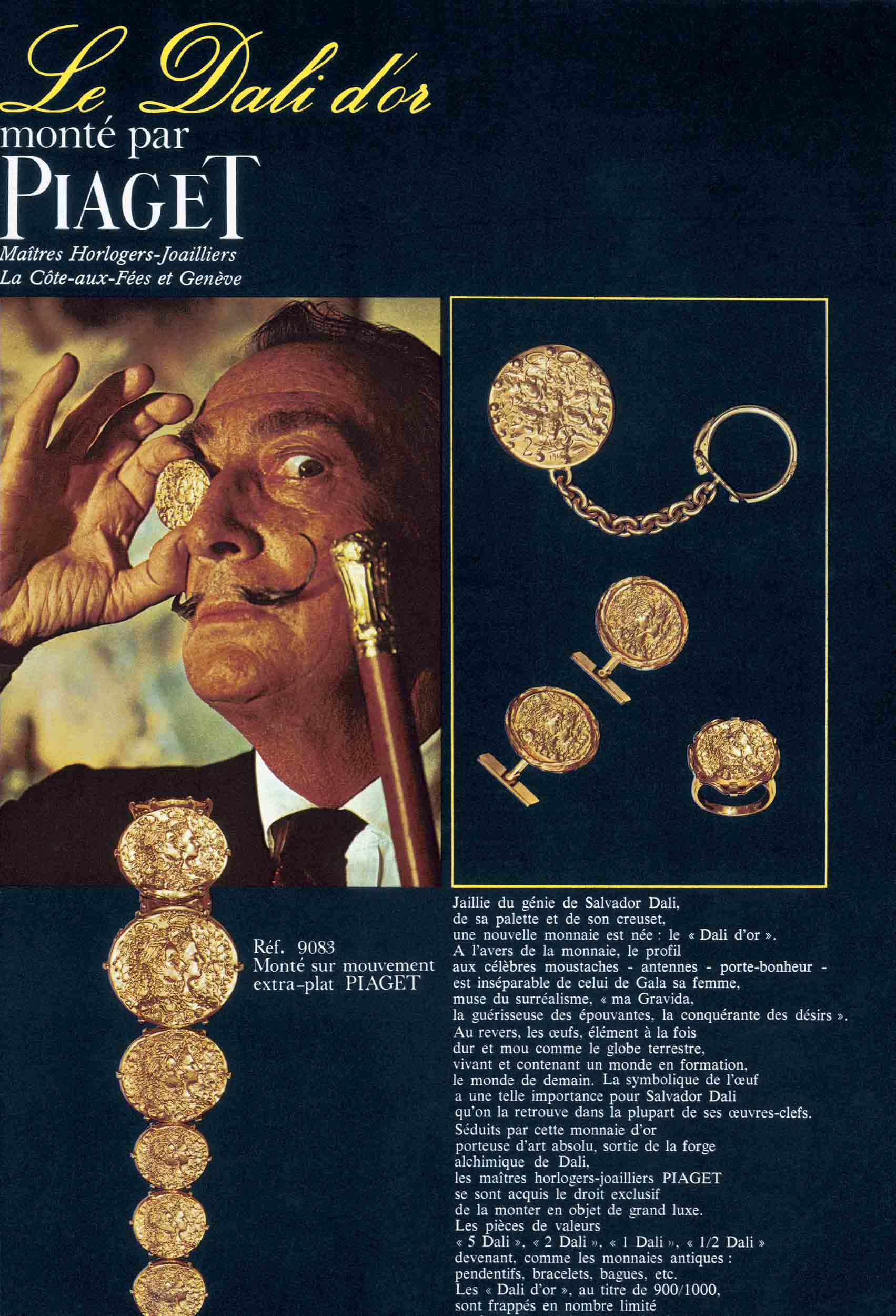 Like a great monarch, Salvador Dalí the megalomaniac had minted his own currency in 1966. There were four different values: ½ Dali d’Or, 1 Dali d’Or, 2 Dali d’Or, 100 Dalí d’Or. During that time, Piaget had made coin watches an emblem of its mastery of ultra-thin horology. In 1967, the Maison acquired the exclusive rights to issue watches, jewellery and accessories which integrate Dali d’Or coins. The creations are designed by Piaget for Salvador Dali.

For the launch of the said models, Dalí demanded a transparent chair so that the audience could contemplate him in all his resplendent majesty. The imperturbable Yves Piaget managed to find an inflatable plastic chair that he was able to place on stage the following morning. Dalí duly agreed to be photographed thus seated, along with his cane and his young pet jaguar on a leash. 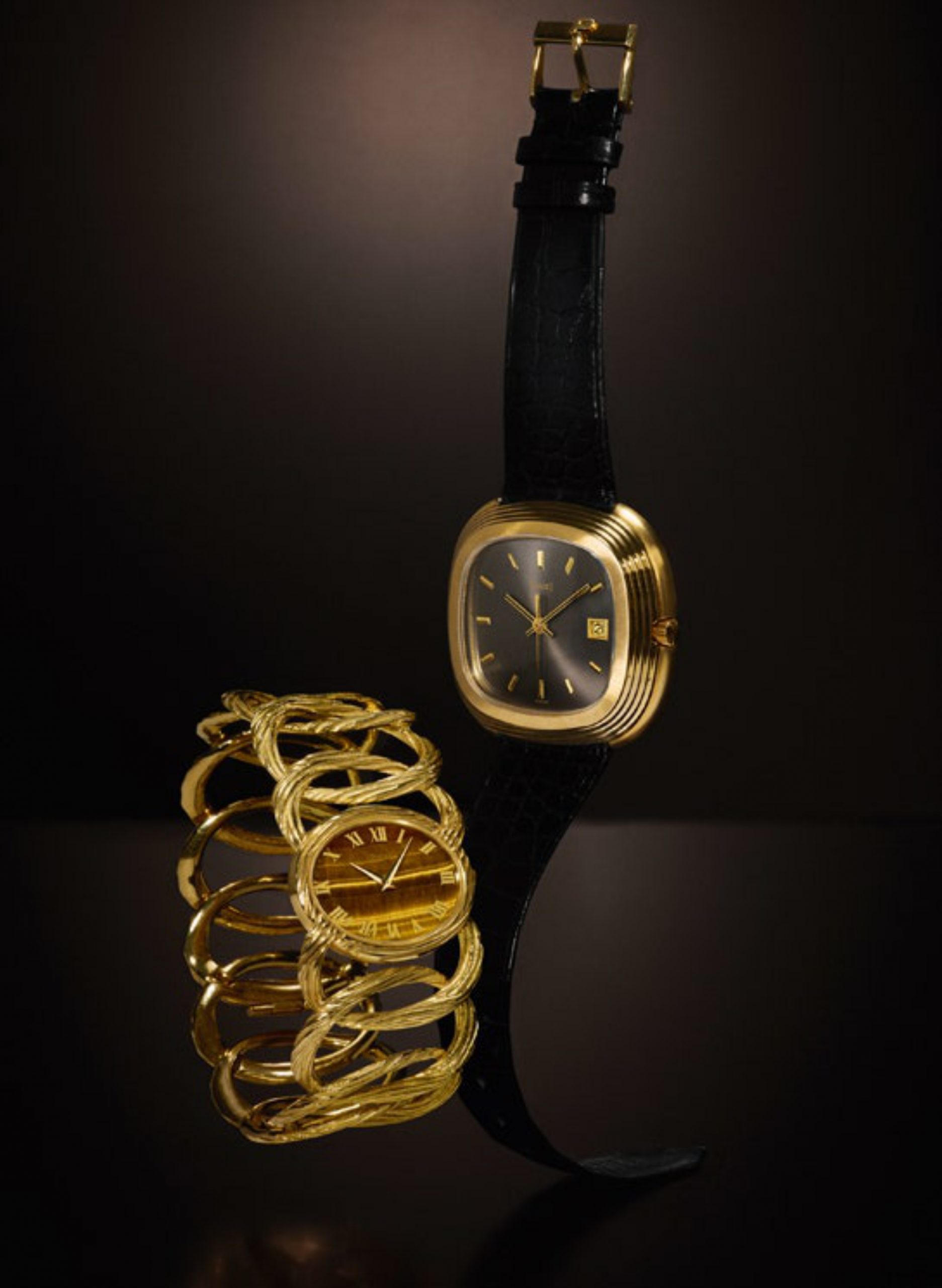 American sculptor Arman, a keen Piaget watch collector, struck up a deep friendship with Yves Piaget and regularly invited him to his New York studio. The artist who considered destruction as a necessary step towards creation used to break apart musical instruments before piecing them together again. United by the same taste of finer things in life and a sense of friendship, Arman together with Piaget created seven gold and rosewood sculptures depicting instruments that were featured in an exhibition held at the Salon Piaget in Geneva in 1988. 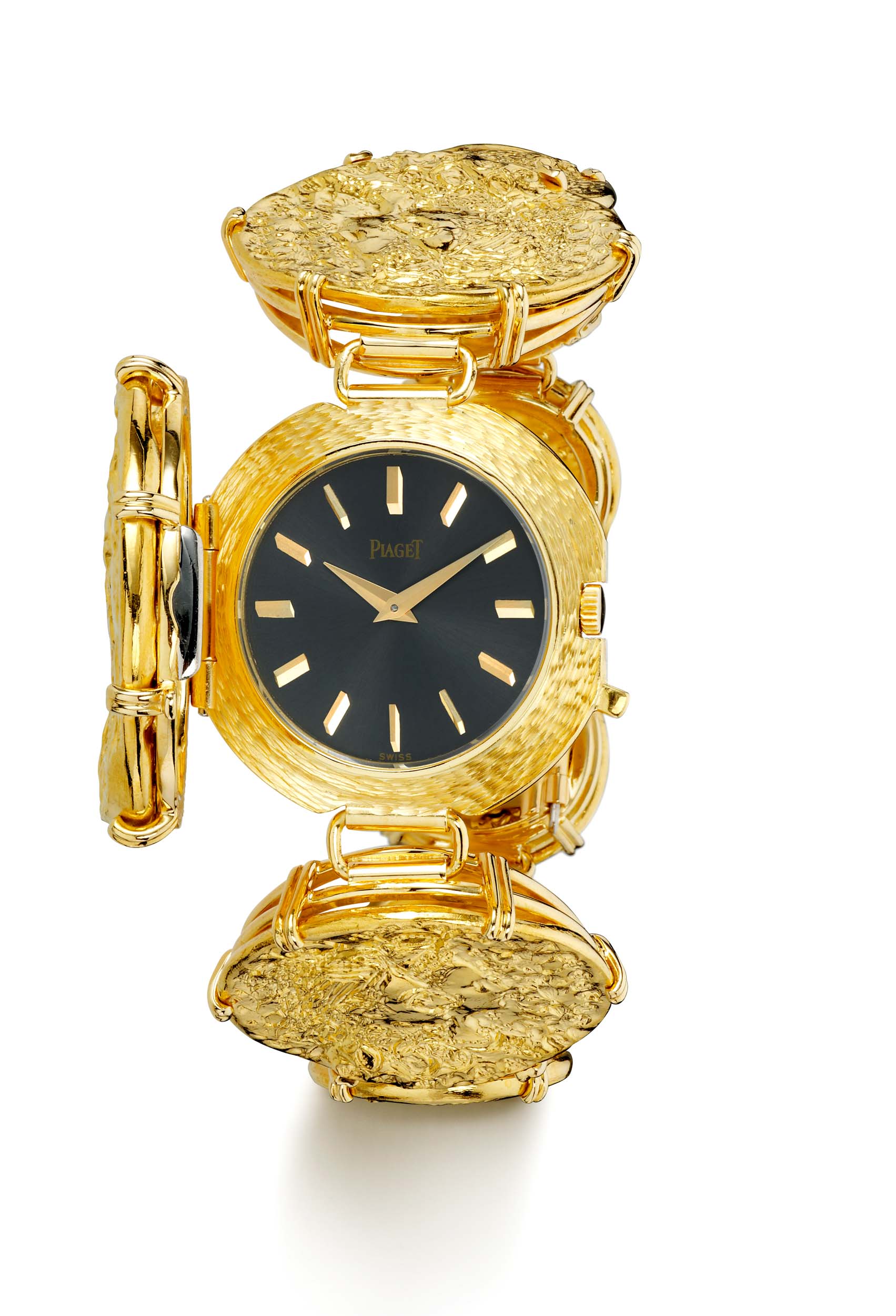 The concluding chapter of Piaget Artist of Precious Time exhibition unveils a further facet of Piaget heritage: how the audacious, extravagant spirit of the House helped women shine with captivating, alluring jewellery watches.

The world is full of extraordinary women who are inspiring, creative, daring and powerful, all while embracing femininity in their own unique way. Women who appreciate craftsmanship, talent and creativity, investing in what can be passed down and that create an emotion. Since the 1960s, this fanciful and extravagant spirit adorned by elegant women has been celebrated by Piaget with dazzling jewellery watches.

The 1960s was a period of complete liberation when traditions were turned upside down. Piaget had the courage to defy conventions and honoured women by creating extraordinary designs specially for women. The Maison never treated its feminine timepieces as complementary options to its men’s watches. 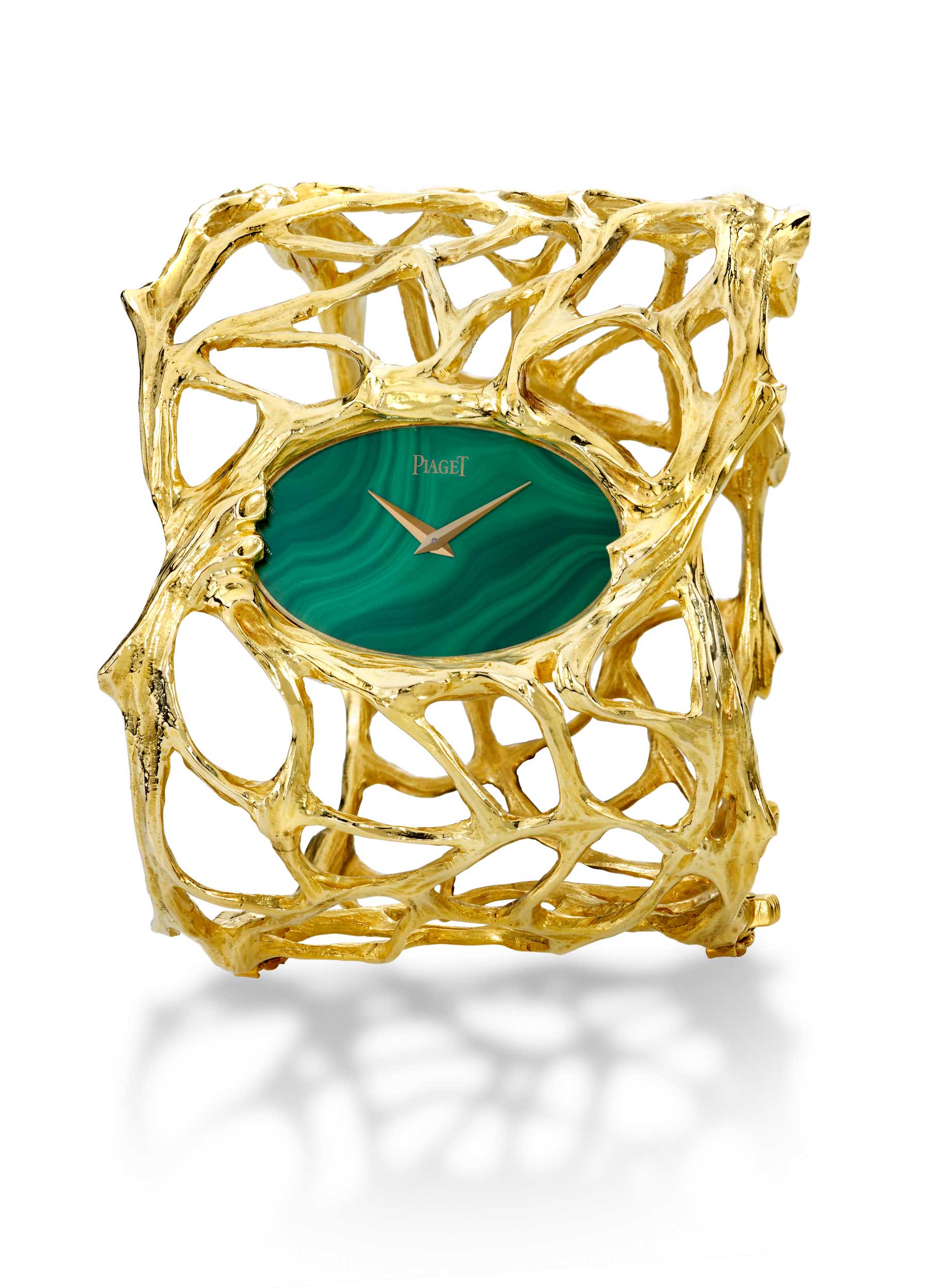 Since then, Piaget epitomizes a unique allure, style and an expression of chic that escapes dogma to follow its own instinct. It is nourished by the life force of creativity that says “yes” to exploring purity to its uttermost limits. Introducing captivating, bold designs, unexpected materials and vivid colour contrasts, Piaget has been regarded as the precursor of an unprecedented style. By making use of all kinds of unique techniques with gold, hard stones and gemstones, leaning on its complete mastery of jewellery and watchmaking techniques, Piaget has demonstrated that with audacious creativity a watch could be turned into an exuberant work of art. 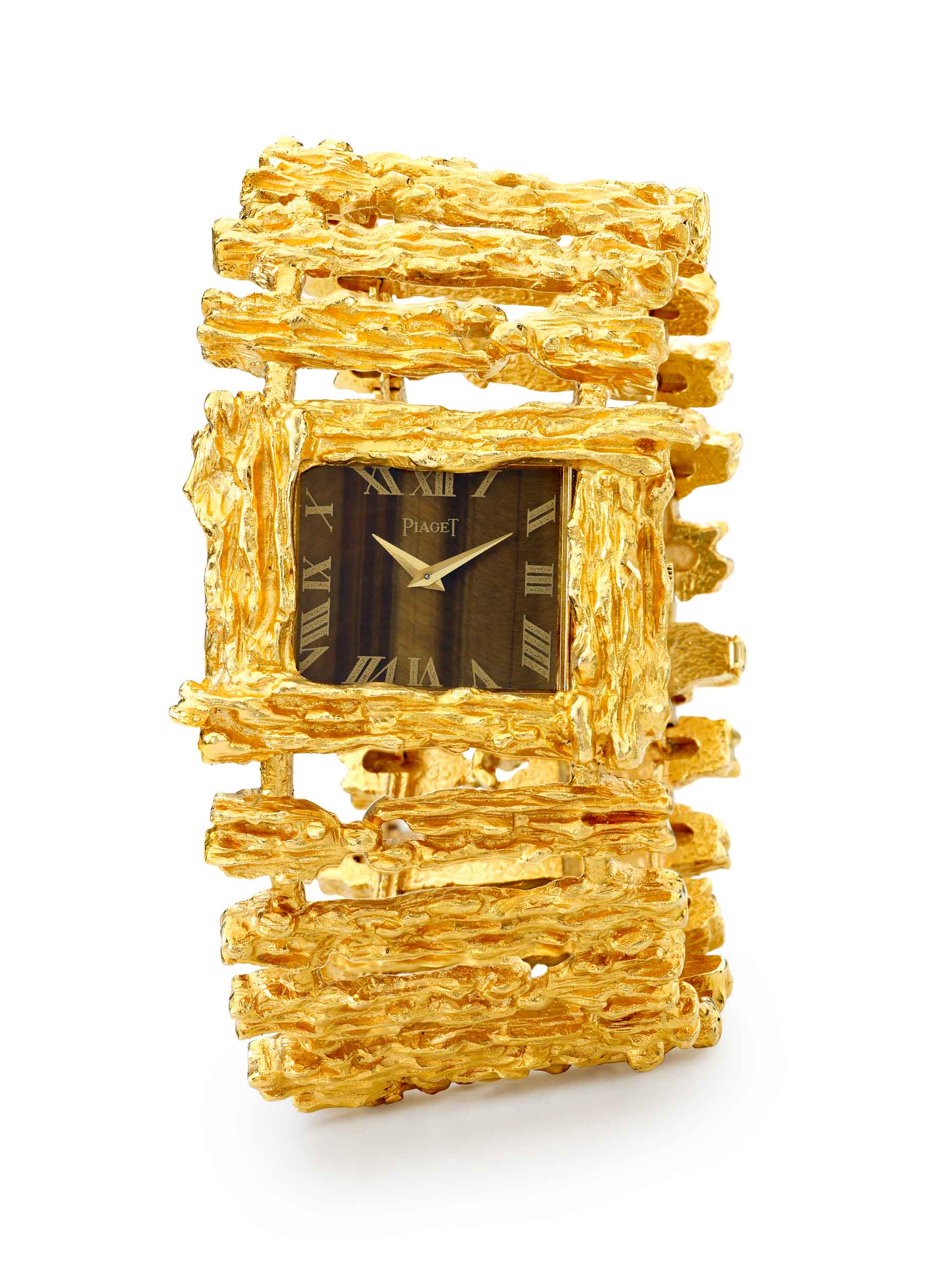 Regarded as haute couture, Piaget creations have made their appearance on the wrist of the most adventurous fashion mavens, the brightest stars and influential tastemakers of the era. They found in Piaget an audacity and a feminity that revealed their allure.

At a time when formal dress codes were set in stone, one woman in particular embodied the free-spirited glamour of the 1960s. Breaking all the rules with her pastel suits, her shorter skirts and her oversized dark shades, Jackie Kennedy Onassis put her own imprint on style, pairing for example her effortlessly chic looks with an unconventionally oval watch with a jade dial set with diamonds and emeralds.

As seen in the exhibition, this yellow gold watch is fitted with a supple bracelet featuring the Palace Decor that evokes the silk-like yet structured texture of natural bark. It is the epitome of what has become known as the Piaget style. With its dazzling display of diamonds punctuated by four emeralds set around the green oval dial, this creation became her watch of choice in 1967. Daring, bold and supremely elegant, it epitomizes the often emulated, yet never equaled allure of a style icon. 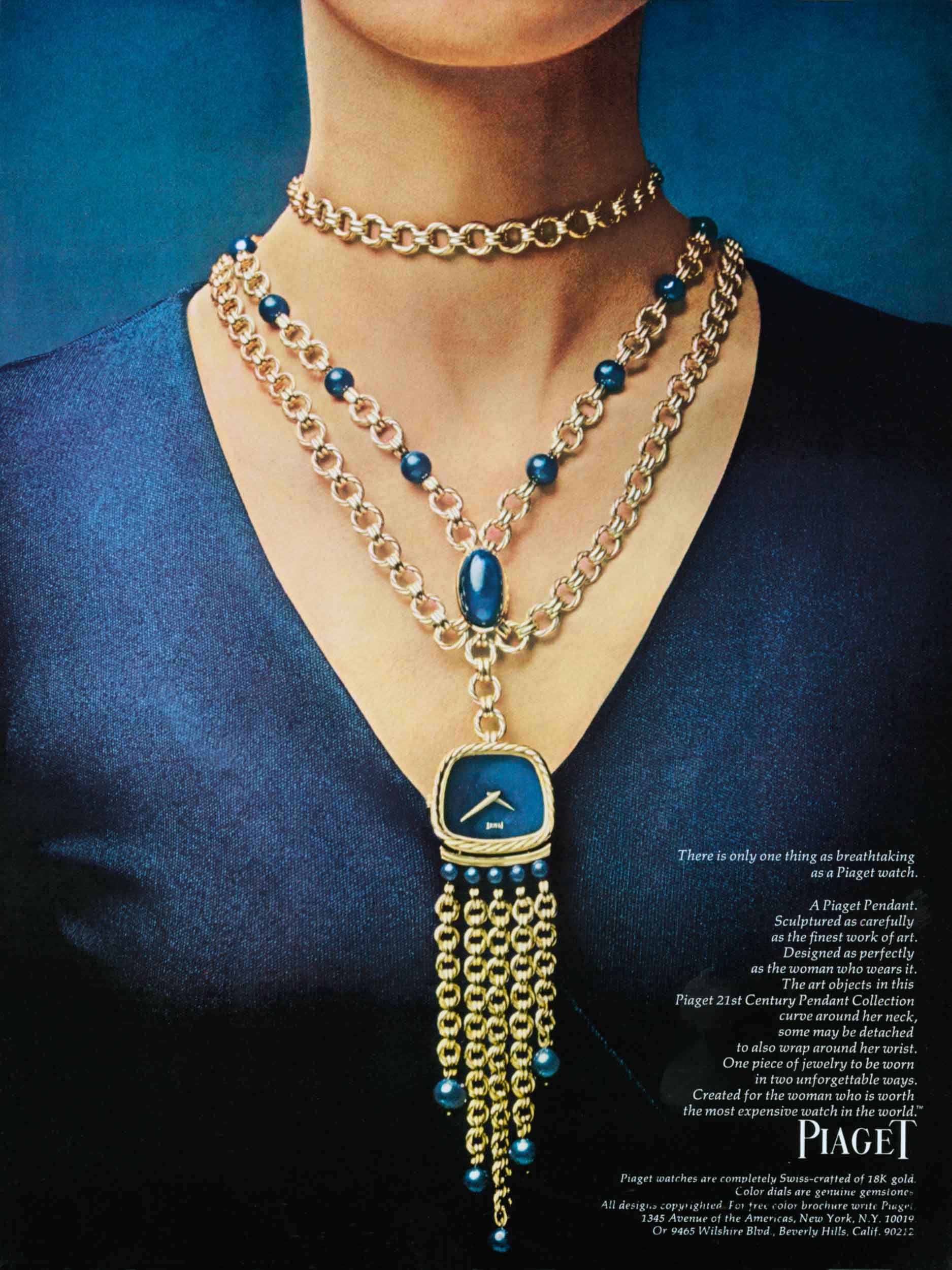 Gathering in the most alluring destinations to celebrate life in a stylish and hedonistic way, these personalities formed part of The Piaget Society. The Piaget Society embraced both the originality of the Maison’s designs and its creative freedom. With every one of its creations, Piaget continued to invite members of the Piaget Society, letting themselves be seduced by a unique lifestyle and art-de-vivre filled with radiant moments. 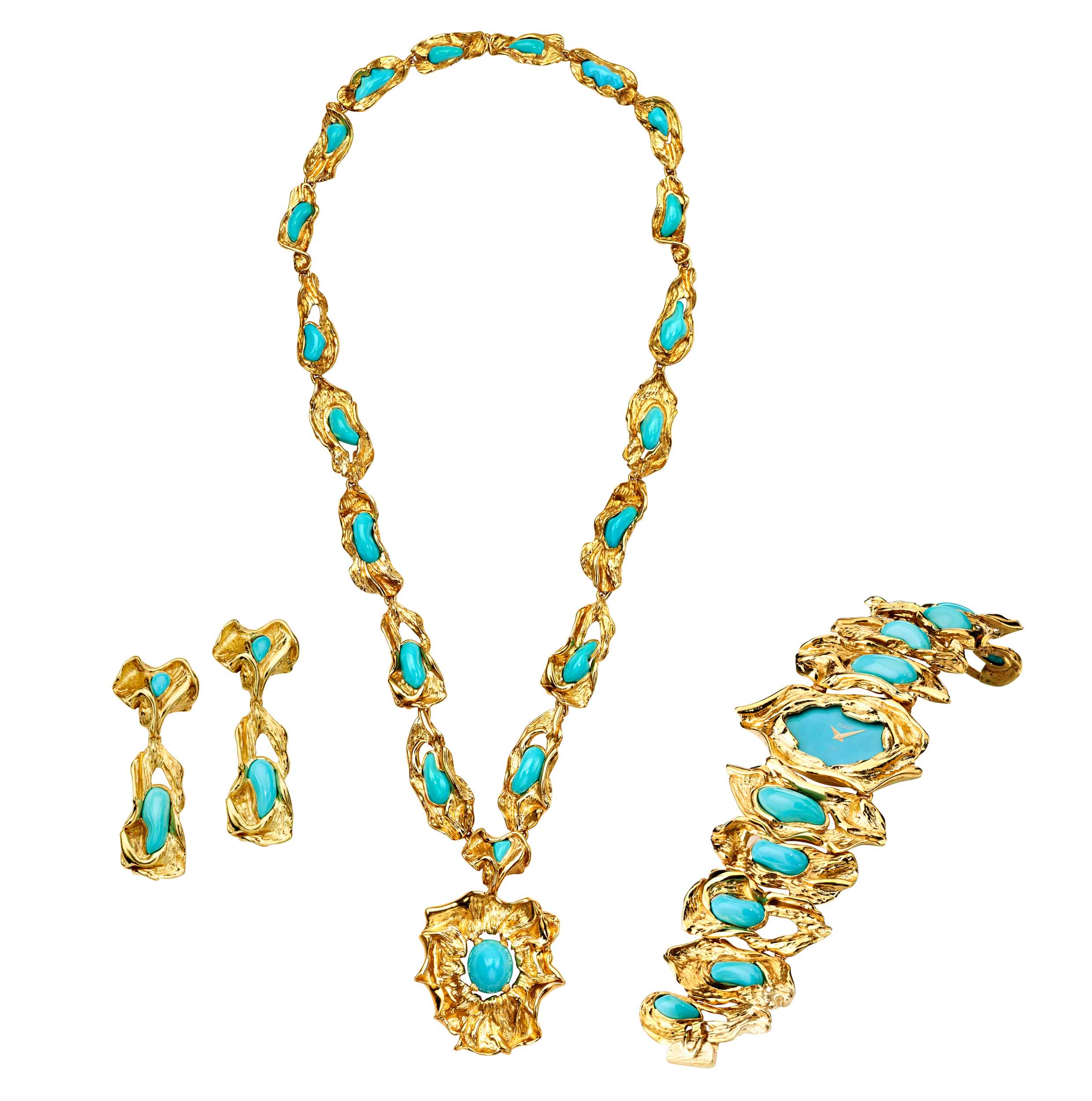 Patience, the keen mind of a detective and a firm sense of belief are the attributes that have enabled Piaget to build up its Private Collection currently comprising over one thousand creations, most of them watches. These include the model usually seen in the hands of Emma Piaget in each family photo, as well as those of Elizabeth Taylor, Jackie Kennedy, Alain Delon, Andy Warhol and Maurice Chevalier; Margaret Thatcher’s Dancer watch, Nancy Reagan’s Piaget Polo; and the Piaget Polo skeleton model proudly worn by Miles Davis. Piaget has also collected several other watches including iconic timepieces that were formerly presented to partners like The Hour Glass in 1979. 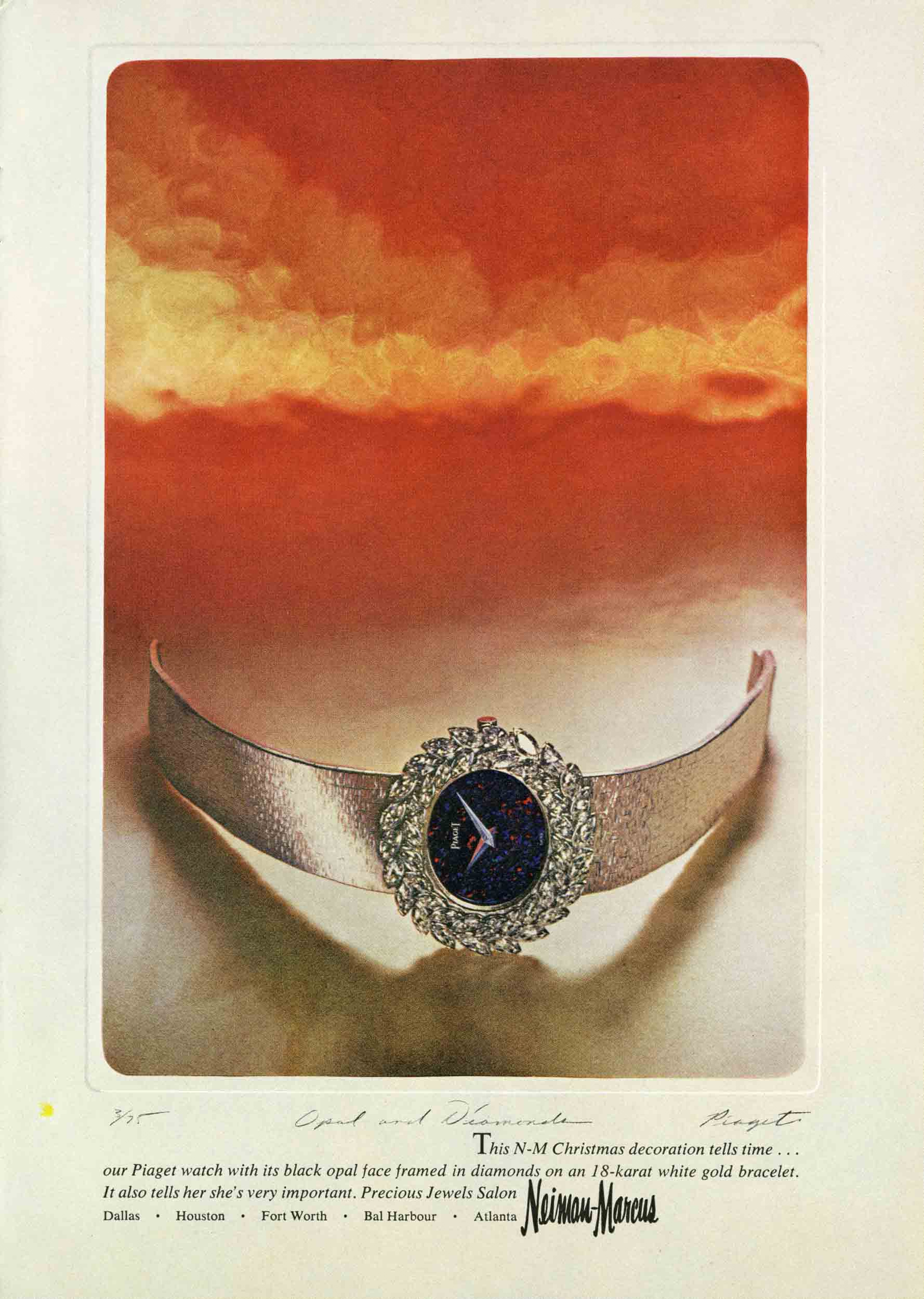 These fabled models sometimes turn up at auctions held in remote parts of the world. It takes all the vigilance of the Maison to track them down and bring them home in order to testify to their exceptional life experience.

Above and beyond the expertise, the creativity and the audacity it illustrates, the Private Collection is also all about creating a brand memory, gathering the stories behind the creations and the people who wore them, interweaving the Piaget of yesterday with that of today.

All interested visitors are invited to register online at www.thehourglass.com/piaget-artist-of-precious-time-rsvp/. 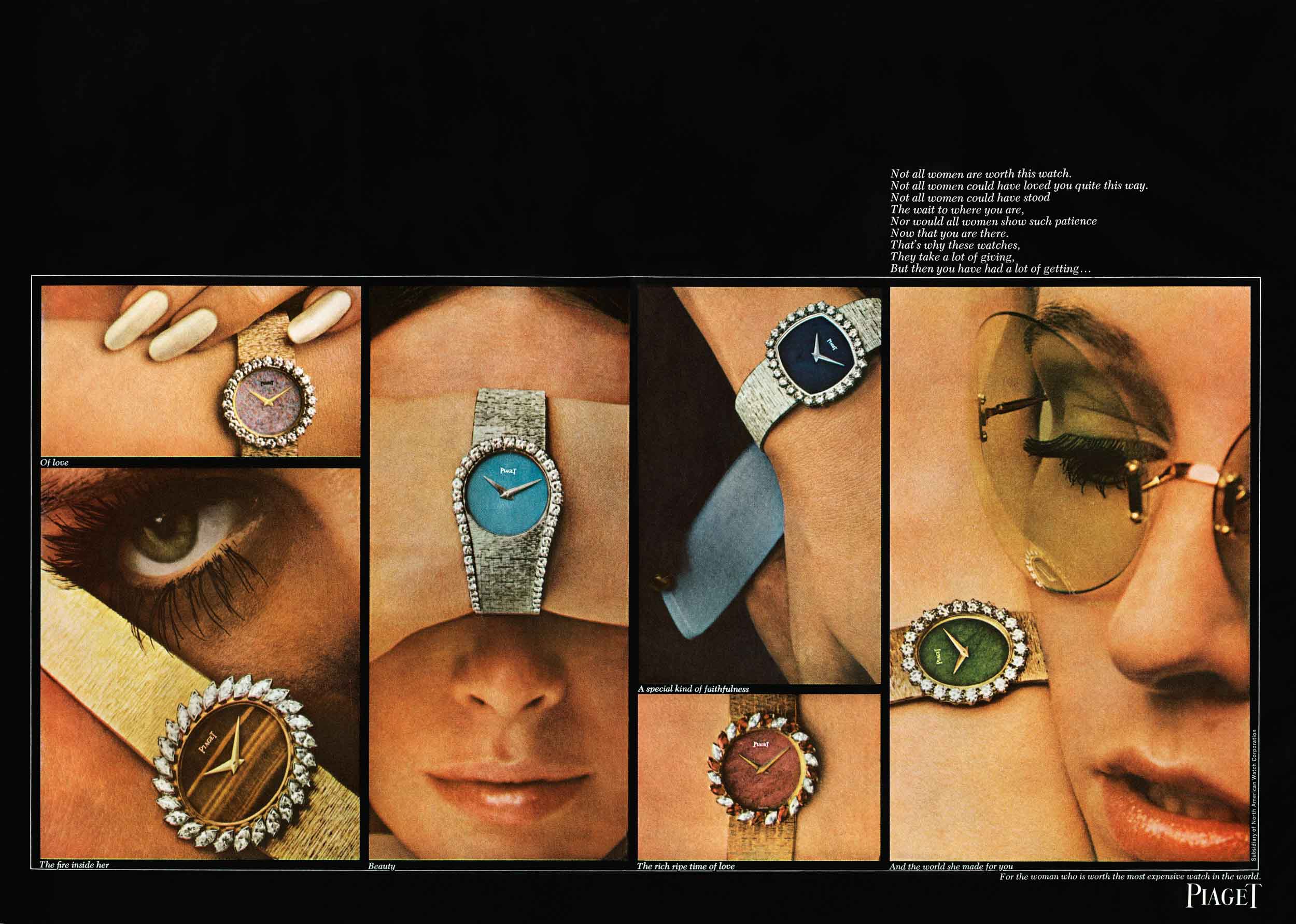