About a month ago, we had the opportunity to discover what I can easily call an impressive watch, not only because of its technical solutions but because of the number of decorative skills involved in its creation. This watch, the SBGZ007 from Grand Seiko’s Masterpiece Collection, comes out from the Micro Artist Studio. If Grand Seiko already represents the luxury side of the Japanese conglomerate, the Studio is its most exclusive haute horlogerie incarnation. Coincidentally to the presentation of the latest Masterpiece watch, we had also had the chance to visit the Micro Artist Studio. Of course, due to sanitary restrictions, this had been done by the mean of videos. But we still had the chance to discuss with Masatoshi Moteki, in charge of movement design and research and development, and Kazunori Hoshino, in charge of planning, development, and design. And this is is what we learned from this discussion.

As a reminder, the Seiko Watch Corporation is composed of a multitude of brands, positioned in various price segments and with different interpretations of watchmaking. Of course, there’s Seiko, which itself comprises sub-brands like Prospex, Presage or Seiko 5 Sports. Then comes Grand Seiko, a higher-end watchmaker that has everything in its hand to compete against some of the best Swiss brands. And finally, there’s Credor, where some of the most complex and most advanced watches of the group are created. Of course, all these watches are not produced under the same roof and by the same watchmakers. Watches by Grand Seiko require far more attention to detail, and thus highly trained watchmakers. The same goes for Credor. But even inside these two entities, there are watches that are handled by yet another atelier, and that is the Micro Artist Studio, where the Japanese magic happens.

The Studio was established in 2000 with the purpose of “uncovering, examining, and mastering the technologies and skills passed on by our predecessors for the production of luxury watches,” and can be considered the group’s haute horlogerie atelier. If the Studio is where the group’s most complex watches are created – for instance, the Credor Sonnerie or Minute Repeater – this is also the place for something even more exclusive, and this has to do with traditional, hand-performed decorative skills. In this rather restricted area, which comprises about 10 employees – and consider them some of Japan’s best watchmakers. It is located in the same facility in Nagano prefecture as the Shinshu Watch Studio, where all Grand Seiko Spring Drive and quartz watches are made.

The Micro Artist Studio comprises a team of movement designers and master watchmakers dedicated to creating some of the company’s most complex and exclusive watches. For example, the Studio is responsible for the most complex Spring Drive watches, under the names Grand Seiko Masterpieces or Credor – such as the Grand Seiko Spring Drive 8-Day, the Credor Eichi II, the 2006 Credor Spring Drive Sonnerie (the Studio’s first creation) or the 2011 Credor Spring Drive Minute Repeater. More recently, the brand presented the Spring Drive thin-dress series, including a fully engraved platinum watch, the SBGZ001, which features a movement designed by the Studio, the calibre 9R02.

And this is where Mr Masatoshi Moteki and Mr Kazunori Hoshino perform their artistic skills, together with a team of technical experts such as Katsumi Nakata, who has been recognized as a Contemporary Master Craftsman and is now the third member of the Micro Artist Studio team to have received the Medal with Yellow Ribbon from the Japanese government. This is the place where the takumis are. 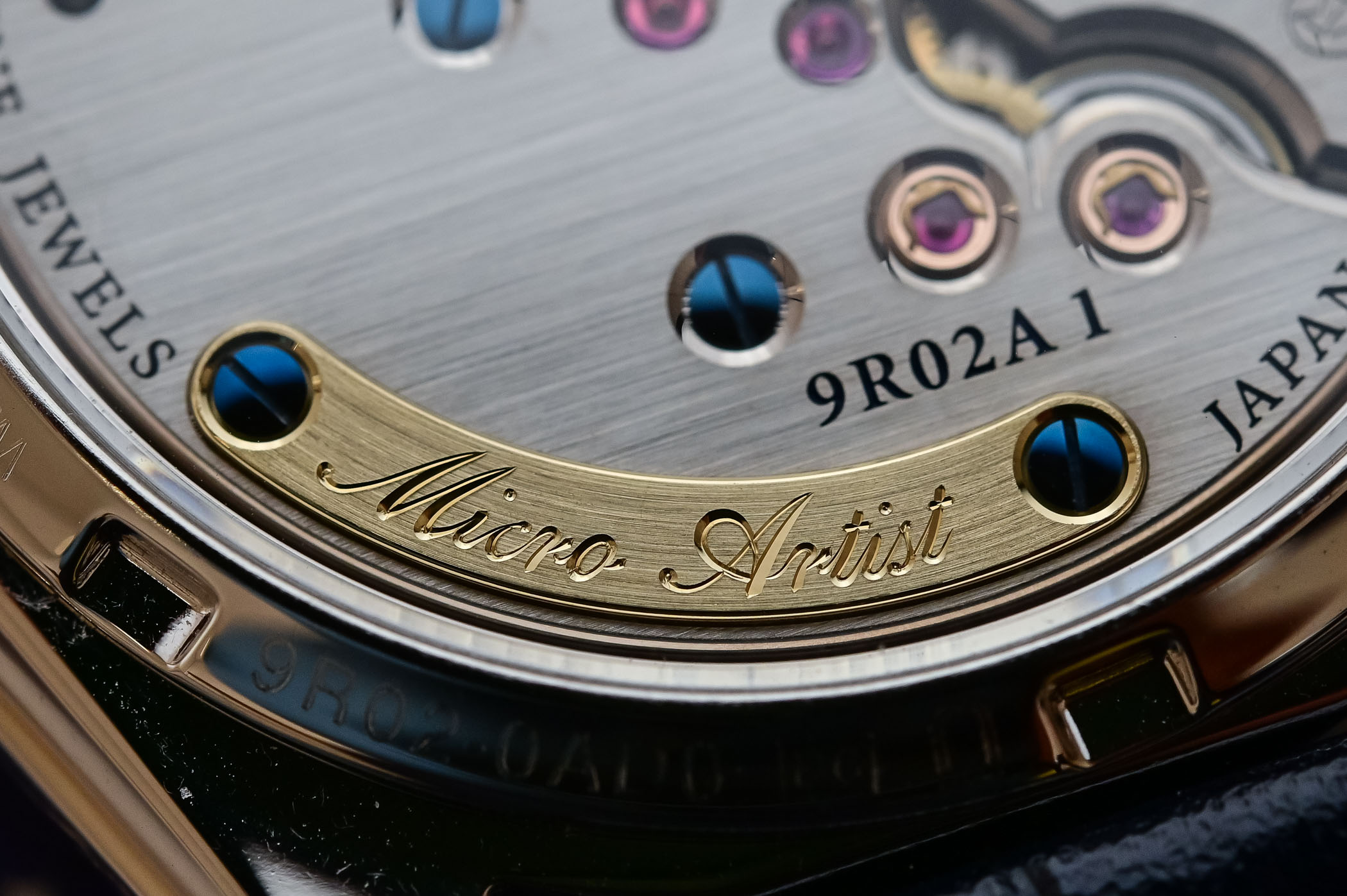 Following the presentation of the new Masterpiece SBGZ007, we had the opportunity to discuss with Misters Moteki and Hoshino, in order to understand what the Studio was all about, but also getting more details about how this new Masterpiece watch came to life.

The Finishing and Polishing of part

We first discovered the area where parts for Masterpiece watches, as well as certain Credor movements – Eichi, Sonnerie and Repeater – are finished. In the most traditional way, as demonstrated by looking at the gear train bridge from the Calibre 9R02, the anglage is entirely performed by hand, using softwood steams, files and polishing pastes to obtain a so-called bercé bevel (with a rounded profile) that can only be obtained by a limited number of highly trained artisans. In the same vein, the deceptively simple hairline finishing on the flat surfaces are once again performed by hand and necessitates multiple passes to achieve this highly precise level of brushing. 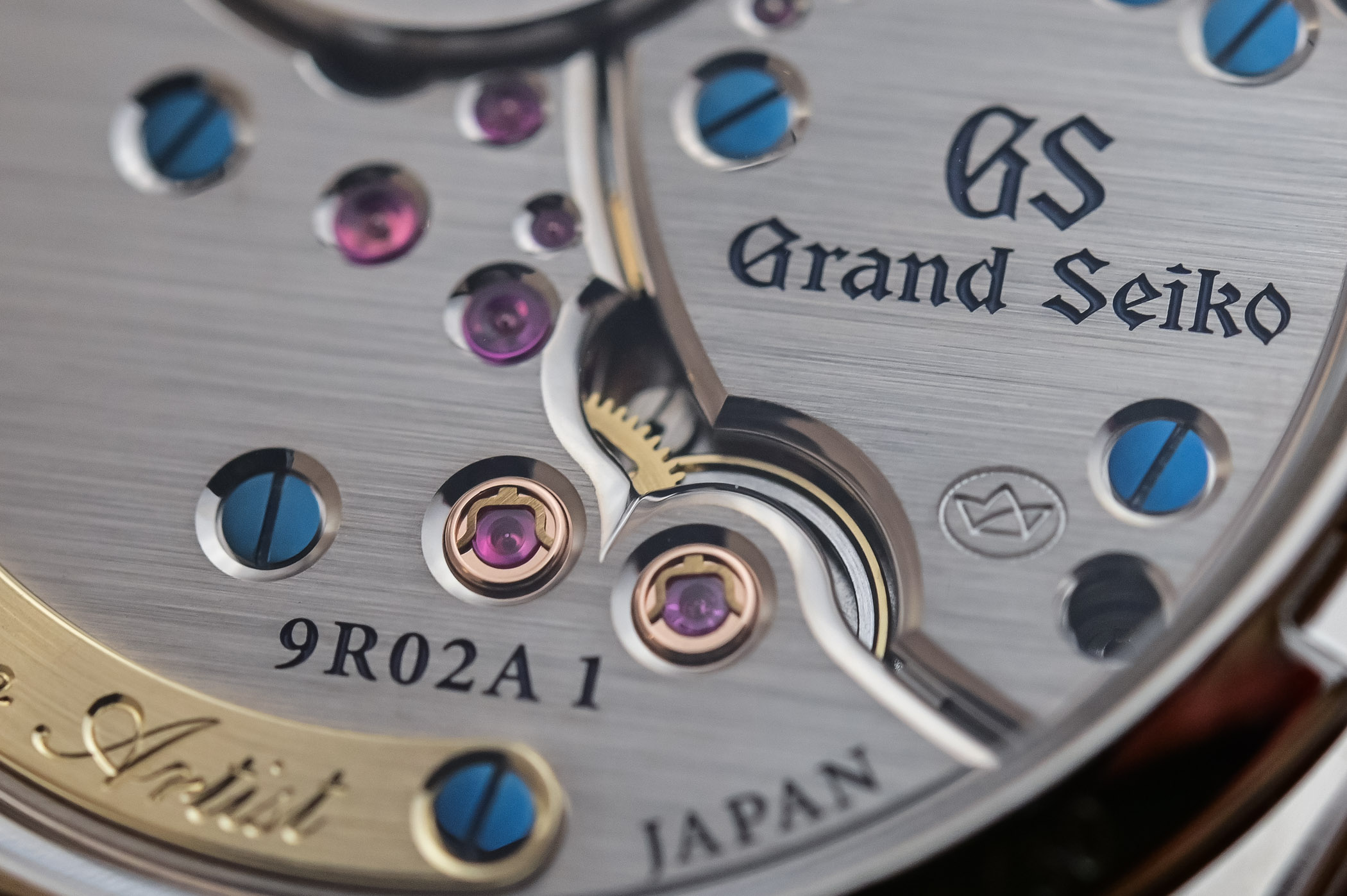 Funny anecdote, a photo of Mr Philippe Dufour sits in the studio, who you might know has given advice to some of the Studio’s watchmakers to define these finishing techniques. Mr Maejima, in charge of movement polishing, indicates that it takes around 20 hours of work to complete all the polishings on the new calibre 9R02.

In conversation with Mr Moteki and Mr Hoshino

How different is a movement from the classic Grand Seiko collection and the new Calibre 9R02 made by the Micro Artist Studio?

Masatoshi Moteki – There are 3 points that are differentiating this new movement. The first point is how the parts are finished. A masterpiece made by the Studio incorporates more hand-finished parts than a classic Grand Seiko movement, to the exception of Calibre 9R31 from GS (where the bridge incorporates hairline finishes), and on all Spring Drive movements whose pinion and pivots are also finished by hand. Back to the new calibre 9R02, parts including bridges, gears and even the top-end of the wheel’s shaft are all polished by hand and allow for a beautiful finish of the movement itself.

Second, the assembly process is different. Grand Seiko movements are assembled by a team. On movements made by the Micro Artist Studio, including Calibre 9R02, a unique skilled watchmaker is in charge of the entire process of the assembly, from putting in the jewels and pins into the bridges, or putting the pinions into the wheels. This allows for each watch to be carefully adjusted, including the clearances between the gears and parts. It ultimately ensures that the watch operates smoothly, even if the wheels are made thicker for extra durability. 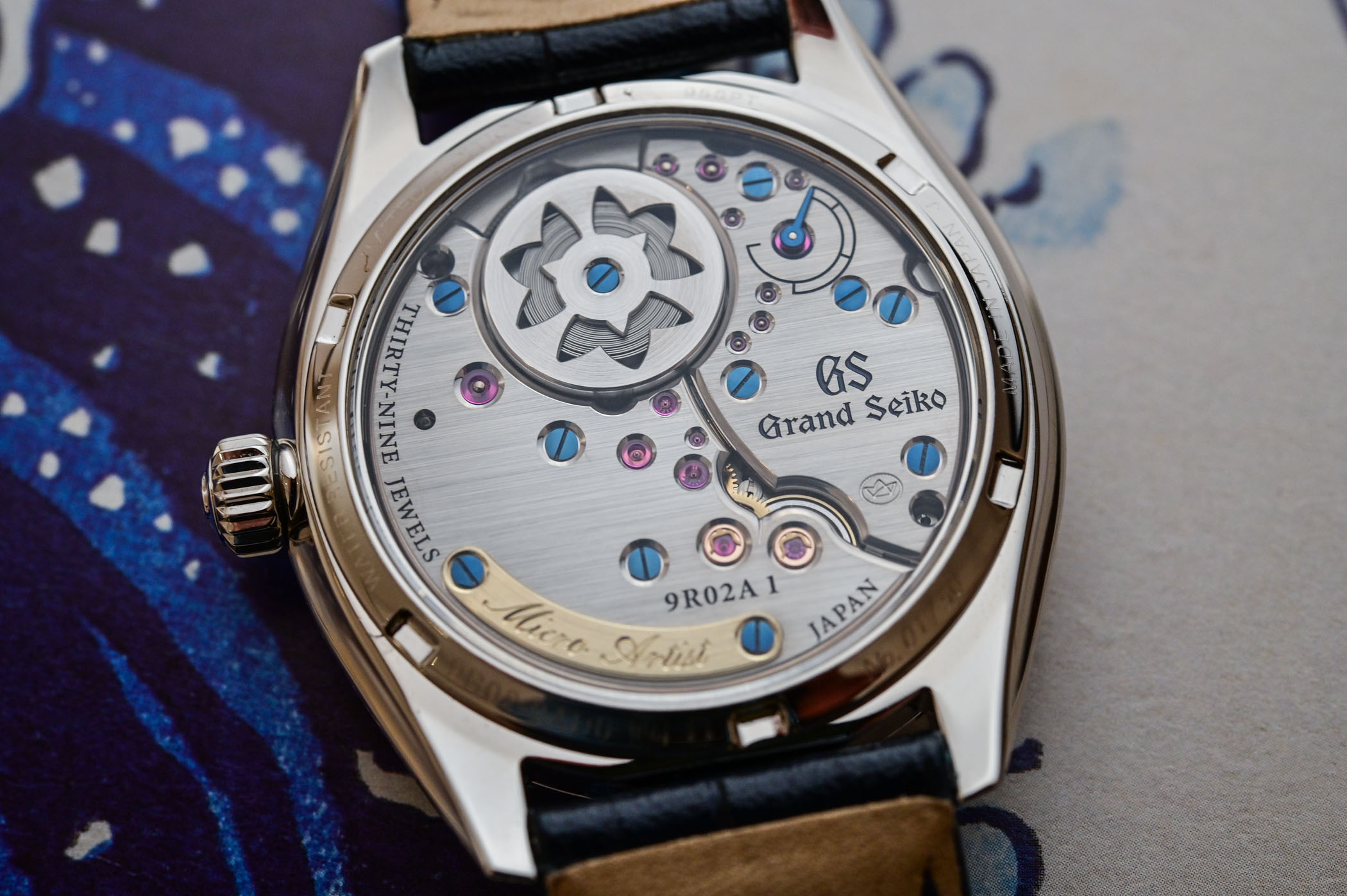 Finally, there’s the use of unique watchmaking technologies, such as the torque return system, which isn’t incorporated in a regular Grand Seiko watch. This allowed for an increased power reserve, from 72 hours to now 84 hours in the 9R02. The movements parts designed by the Micro Artist Studio are also made with stricter standards than those of Grand Seiko, as due to their complexity, these parts need more strength and durability. Calibre 9R02 also utilizes German silver for the gear train and power reserve bridges, which allows for an even more exclusive design and finishing.

What are the finished techniques used and how are they performed at the Studio?

Masatoshi Moteki – There are two types of finishing techniques used at the Micro Artist Studio. One is polishing for beauty and aesthetics. The other is for functionality, to reduce friction and preventing wear of the parts. Of course, in some cases, both can be found in a single part. When smooth surfaces are required, parts from non-Masterpieces watches may use barrel or chemical polishing, which however results in edges of the parts that are rounded, losing edginess. In the case of the Studio, we use wood sticks, sandpaper or files to polish only the necessary areas and not the entire part. This helps us to keep the aspect of the movement and parts, by having a mirror finish where needed while other areas are still sharp. This is particularly visible in the bellflower from the Calibre 9R02.

From a movement designer’s perspective, what are the positive aspects of working with Spring Drive compared to a classic mechanical movement? Is this technology completely suitable for complications?

Masatoshi Moteki – There are some design advantages in a Spring Drive movement. For example, the glide wheel is very lightweight and allows for a more simple design structure. Also, thanks to its conception, shock-resistant bearings are not necessary. This simplicity is one of the advantages. And like a mechanical watch, a Spring Drive movement is powered by a mainspring, which can generate a large amount of torque. Together with the gliding motion of the second hand, which is silent, it is perfect for chiming watches, such as the Sonnerie and the Minute Repeater. 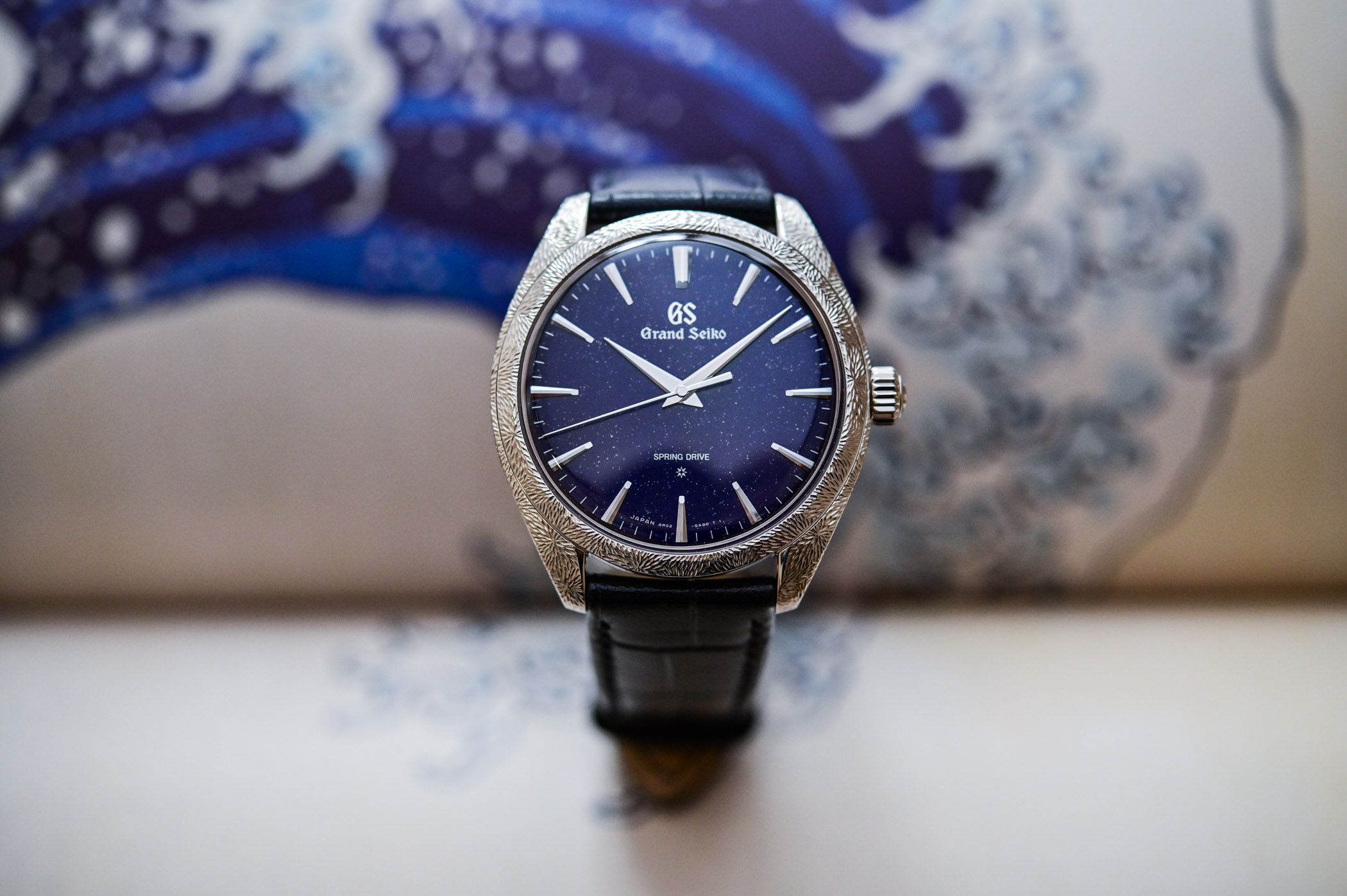 What are the key elements of the design of the 9R series and the Calibre 9R02 in particular?

Kazunori Hoshino – I believe that one of the key elements and something that I find important in the calibre designs is to incorporate “beauty based on functionality” or the beauty of use. This value is cherished in Japan and I try to incorporate it as much as possible in my movement designs.

Masatoshi Moteki – There’s something important to mention with the 9R02. For example with the 9R01, the bridge is an image of the contour of Mont Fuji. In the case of 9R02, the mainspring barrel is in the shape of a bellflower, a symbol of Shiojiri city of Nagano prefecture where the Studio is located. As such, the design also reflects the origins of this movement.

Concerning the new Masterpiece SBGZ007, what has guided the design and what represents the combination of starry blue dial and engraved case?

Masatoshi Moteki – The inspiration behind the design of the dial and case is the starry night sky above Achi. We tried to recreate this image on a blue dial, which is also known as Grand Seiko’s colour. The design concept dates back to the 8-day power reserve Masterpiece watch – note: the SBGD202 – which also expresses stars at night. Based on the design process established with this black dial, we wanted to adapt this to a blue dial. The first trials had a different blue colour and less sparkling qualities than the one found in the SBGZ007. Originally, we were considering giving the GS logo a dimensional feel, but we decided to have this logo etched onto the dial, which makes this process even more complicated. 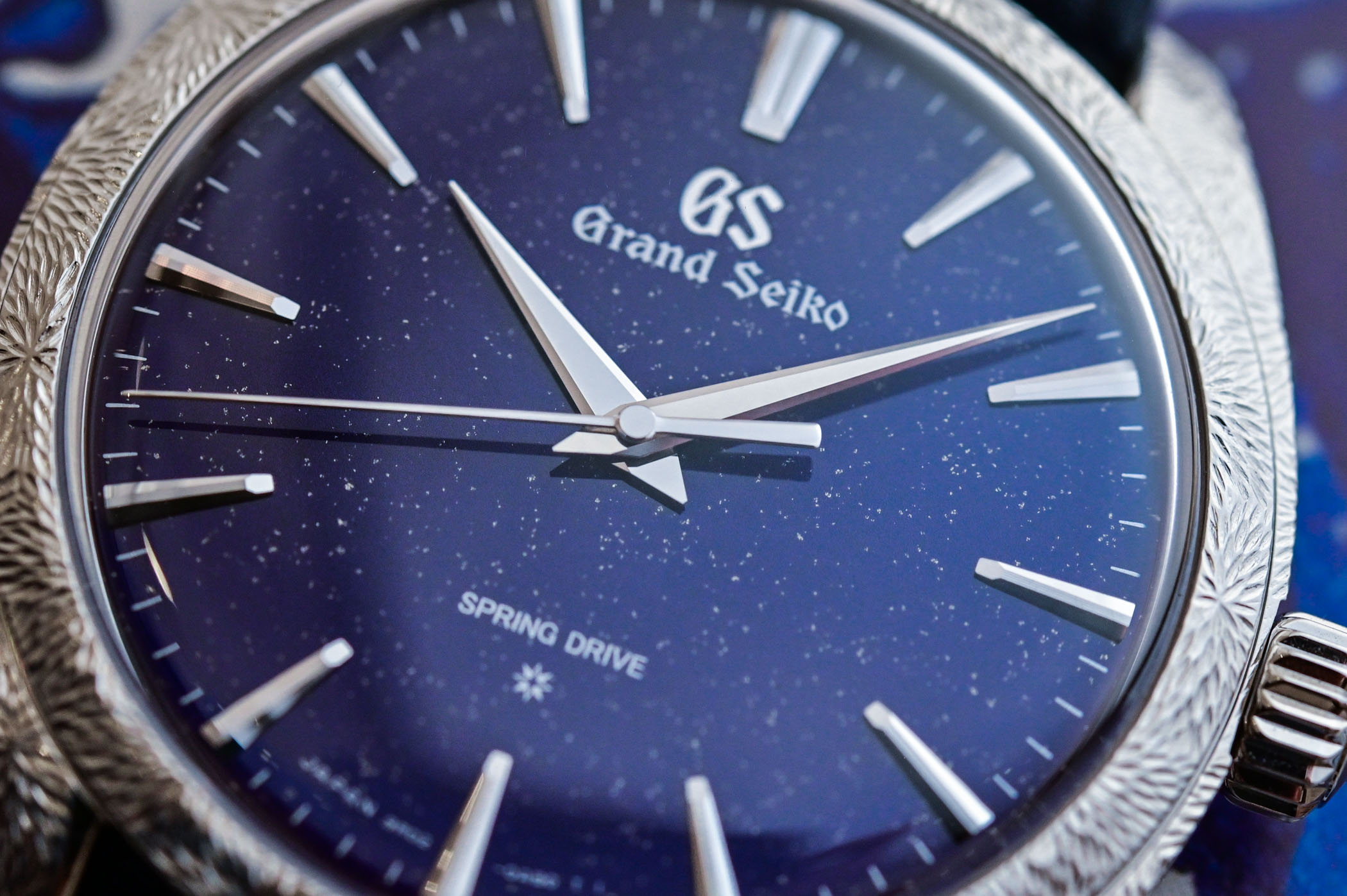 About the case, and to decide what pattern could be appropriate to decorate its surface, I use a specific book (named Edo Komon) that gathers small traditional patterns from the Edo era (1600-1868). Through this selection of antique works, I decided on what to use to create the specific pattern engraved on the surface of the case. Once established, we applied this pattern on a flat surface, to experience how to carve this pattern. The next step was to take this design that we established and apply it to an actual case, which is of course more difficult considering the tridimensional nature of this part. 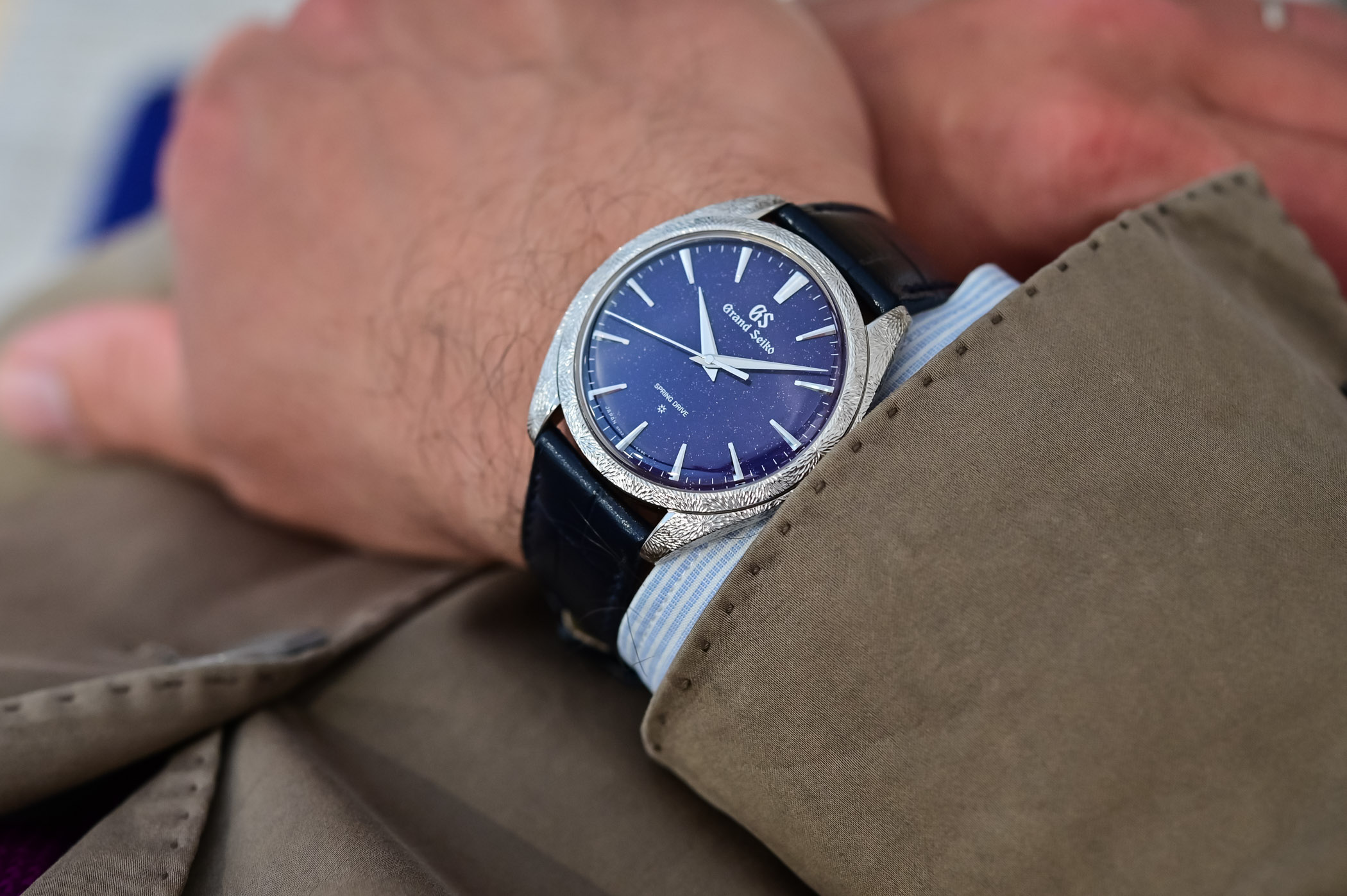