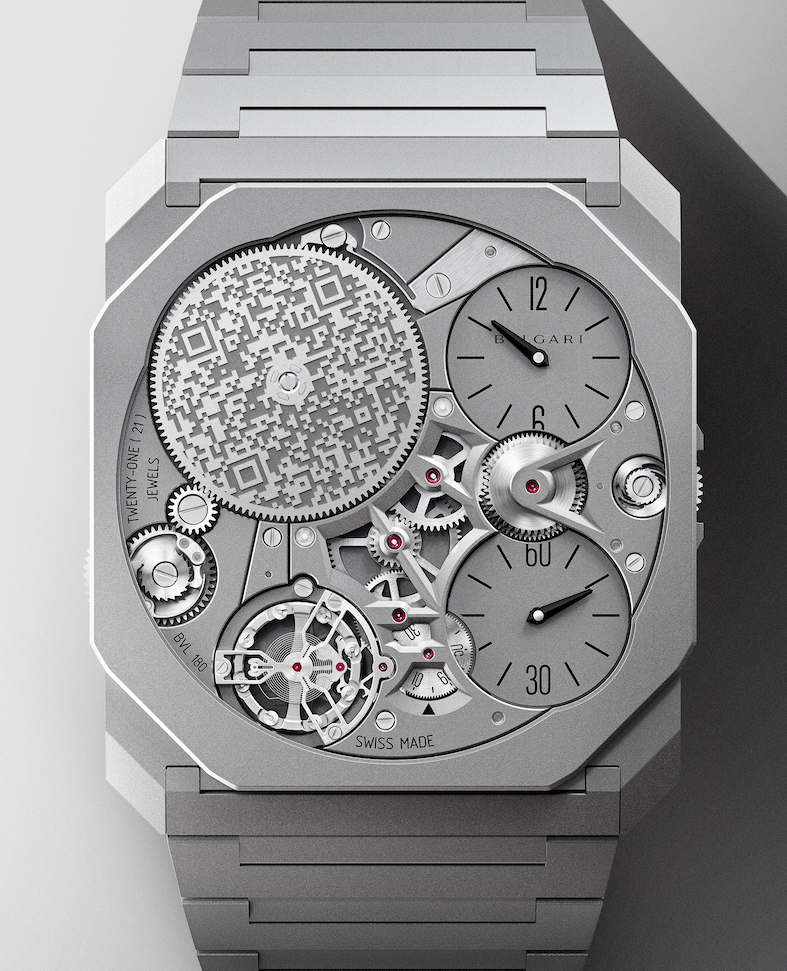 Bulgari Octo Finissimo Ultra is as slim as a dime.

Bulgari’s newest watch, the Octo Finissimo Ultra, is the 8th world record-setting timepiece for the brand: it is the thinnest mechanical manual-wind watch in the world. At just 1.8mm thick, the entire cased watch (not just the movement) is just slightly thicker than the ultra slim American dime.

The Octo Finissimo Ultra watch, which is being presented just in time to celebrate the 10th anniversary of the now-iconic Octo collection, holds eight patent applications, boasts a QR code engraved on the barrel’s ratchet wheel, and is being sold with exclusive NFT artwork. Just 10 will ever be made of the Octo Finissimo Ultra, which, according to Bulgari, is the final piece in the Octo Finissimo World Record series. This is definitely what is referred to as “going out with a bang.” 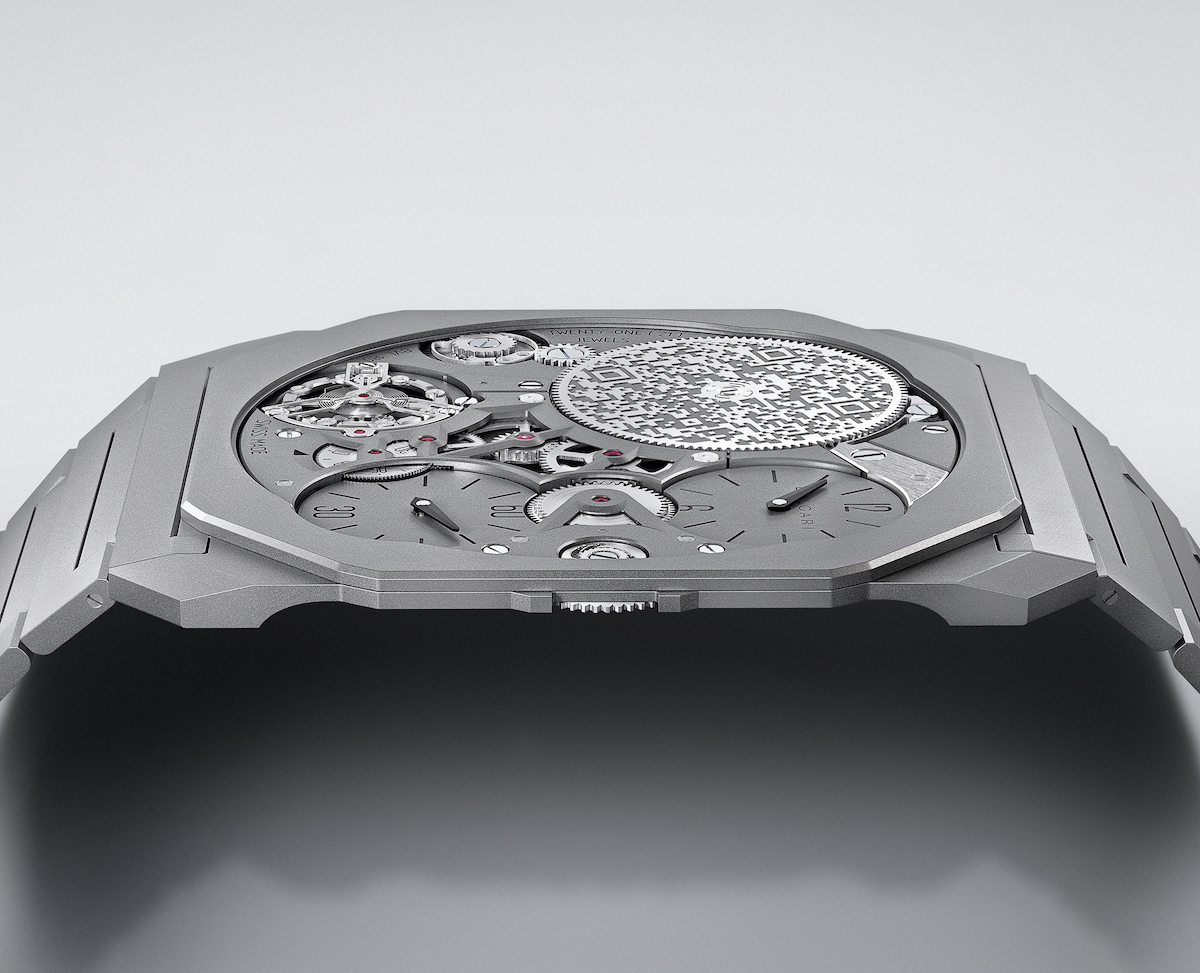 Only 10 pieces of the Bulgari Octo Finissimo Ultra will be made.

The creation of this exceptional timepiece now even beats the famed Piaget Ultra-Thin watches, which held the record with its 2mm high Altiplano. The Octo Finissimo Ultra watch was three years in the making and required the brands experts to start from scratch and push all the conventional boundaries.

Now, as Bulgari’s eighth consecutive world record, this collection, which holds more than 60 international awards, goes down in the history watch journals not only as a modern miracle in watchmaking, but also as the shepherd of a new era of a centuries-old craft. It also marks the dynamic connection of mechanics and digital phenomenon as it enters into the worlds of NFTs. 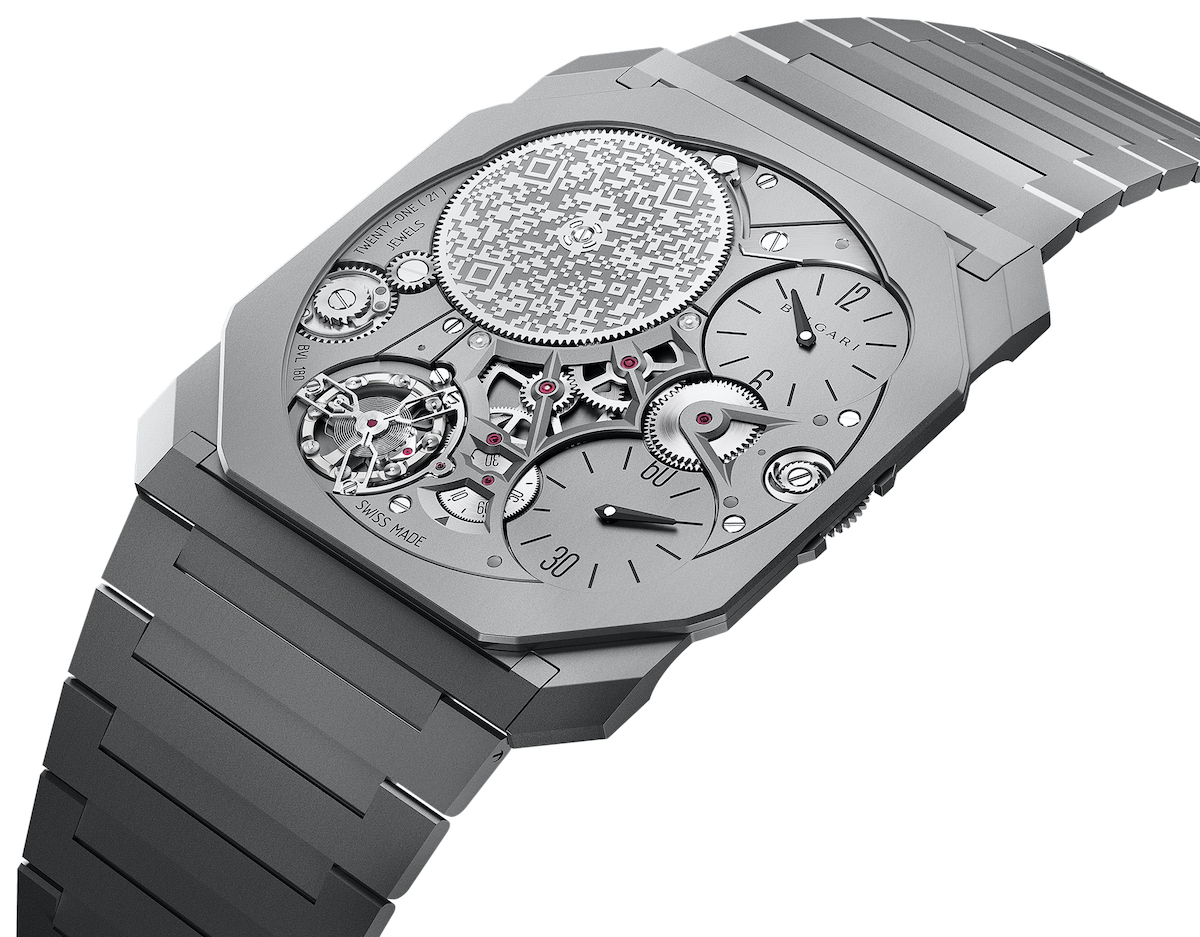 The QR code on the large ratchet wheel on the dial side, in and of itself, is a sight to see. It clearly screams innovative and forward thinking. However, it is actually a working QR code and offers the owner a link to an exclusive NFT artwork, as well as a discovery into the story behind the watch design, the making of, and the history. There is even a three-dimensional virtual journey inside mechanical   movement.

The watch is the result of a collaboration between Bulgari’s in-house watchmaking masters and movement specialist Concepto. In order to ensure the thinnest manual- wind movement in the world, the BVL Caliber 180 is built directly into the watch’s tungsten carbide case back, using that structure as the mainplate. All of the 170 components in the movement, which offers 50 hours of power reserve, are integrated into the caliber. It measures a scant 1.50 mm in height. 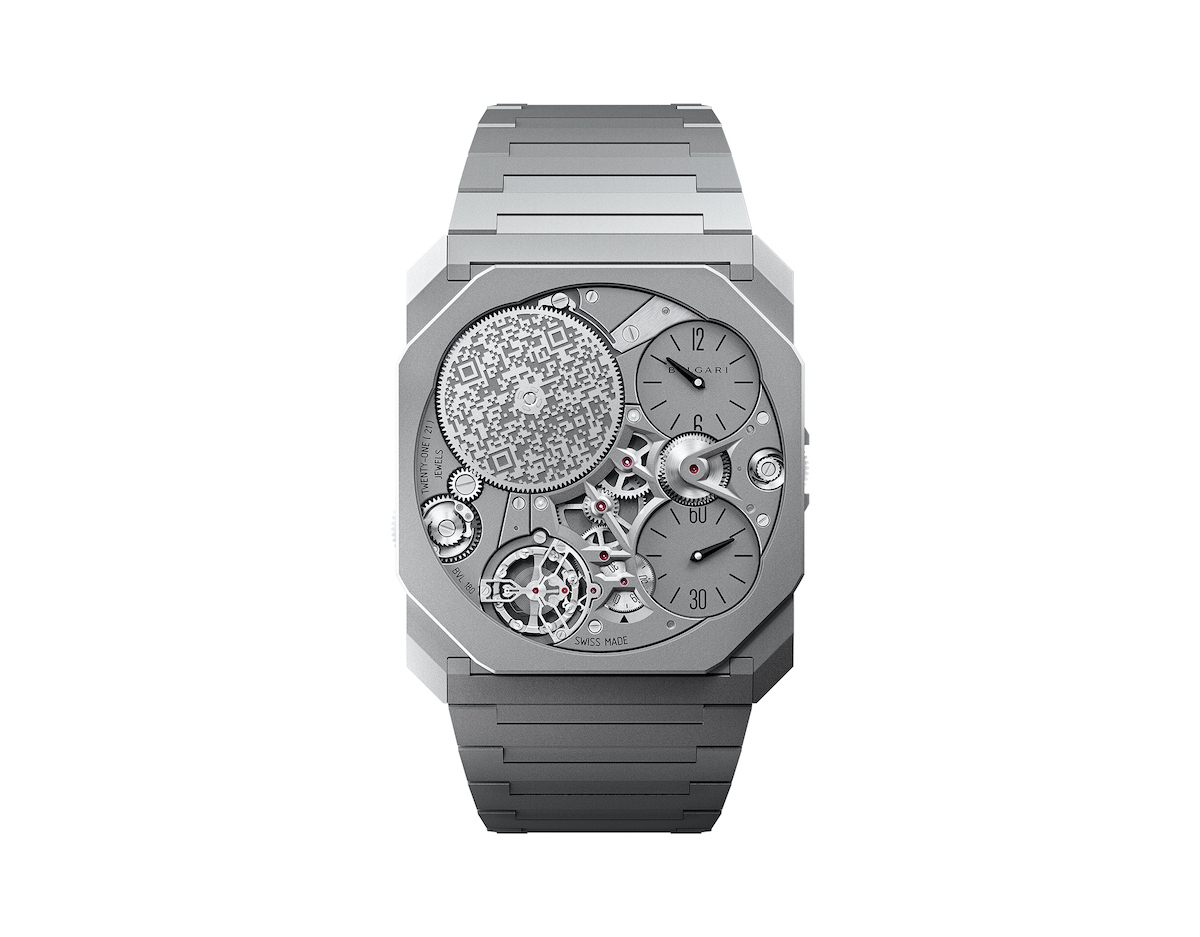 There is even a patent application for the ultra thin titanium bracelet and clasp.

Some of the parts in the movement serve more than a single function so that the brand could conserve space, and others had to be specially developed to fit the confines.  The dial, for instance, displays the time indication and also holds other parts in place. Because a traditional vertical crown would be too tiny, horizontal knobs (one for winding and one for setting) were developed. 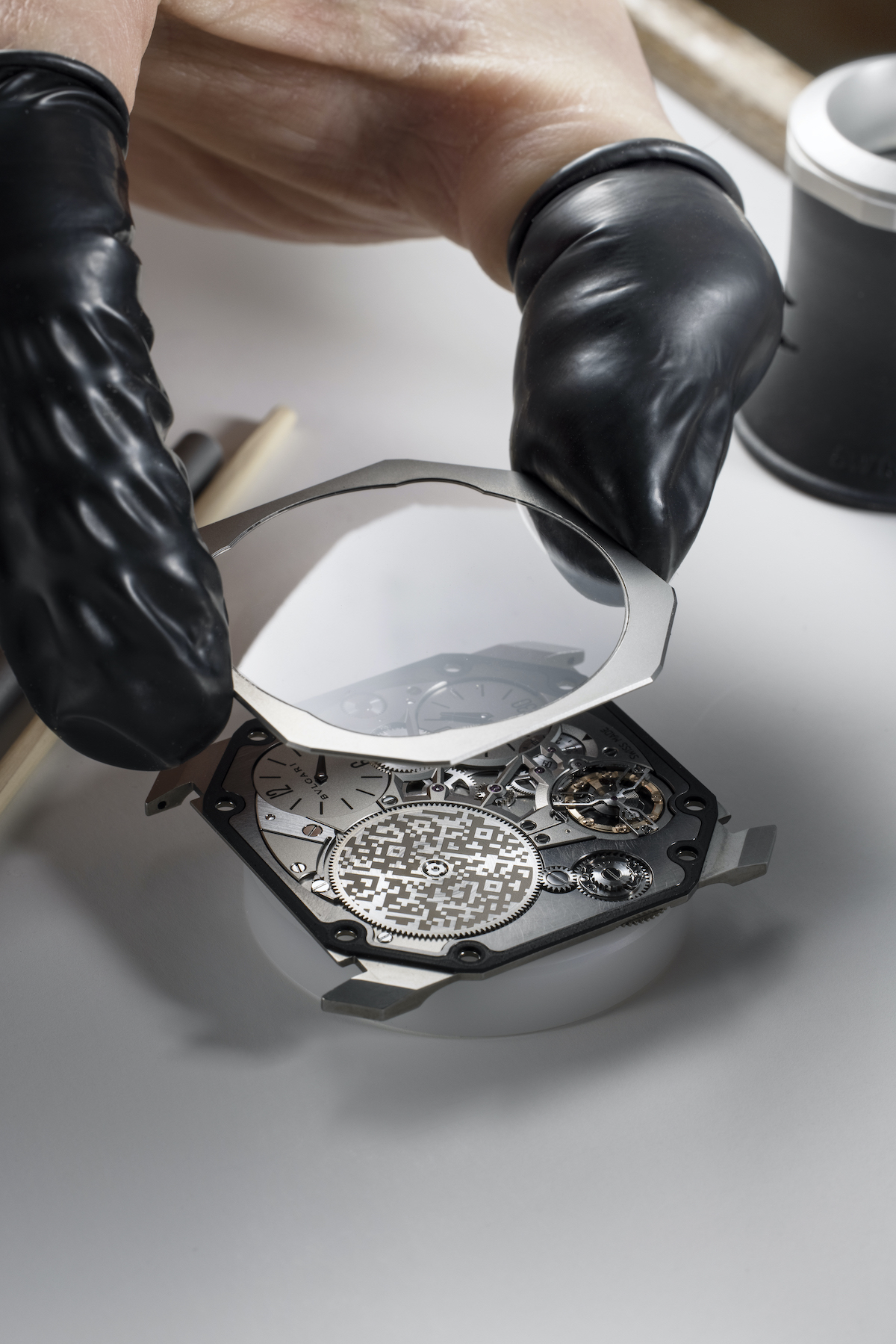 The new caliber is built into the tungsten carbide case back and patented sapphire glass assembly is added.

The watch measures 40mm in diameter octagonal cased watch and boasts a monochrome color scheme. The case middle, bezel and lugs are made of sandblasted titanium.  Additionally, an all-new integrated titanium bracelet and folding clasp was also specially developed in order to be as thin as the watch. 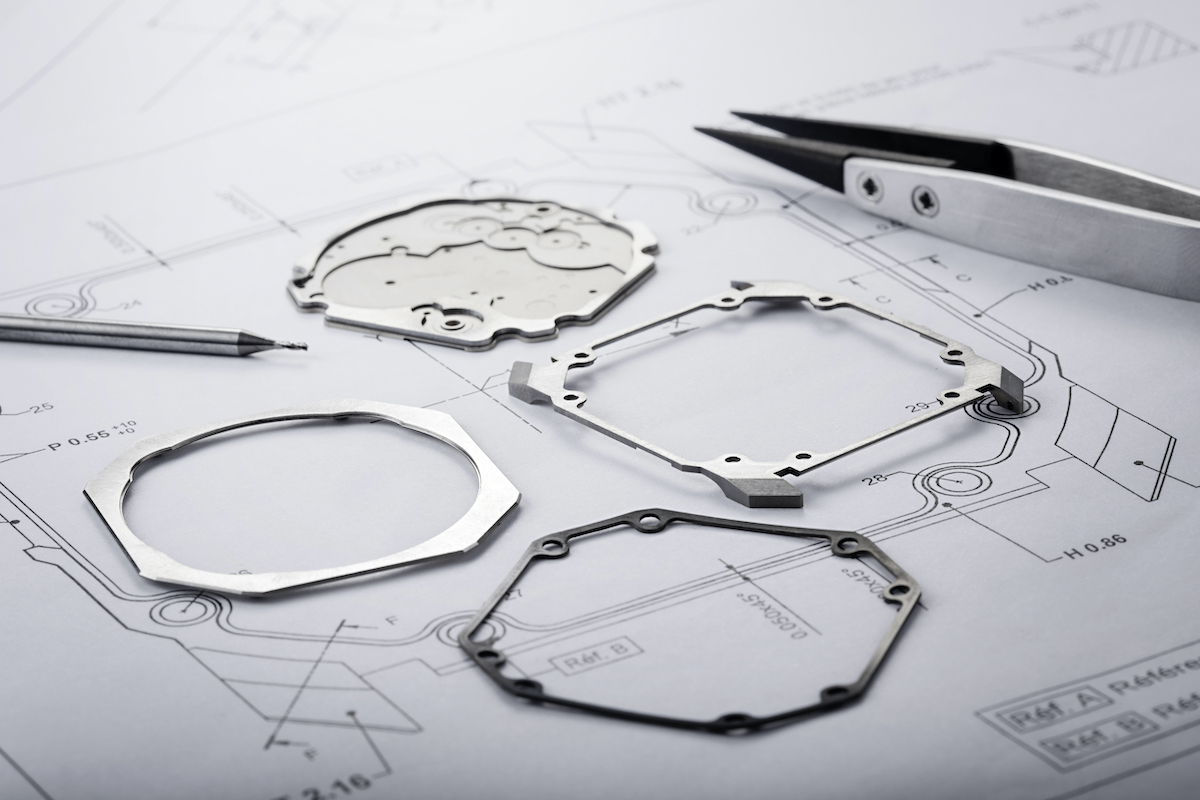 Bulgari Octo Finissimo Ultra was three years in the making.

According to Fabrizio Buonamassa Stigliani, Bulgari’s Product Creation Executive Director, “The challenge of this eighth record was the most difficult to overcome, since we had to break the rules not only in terms of movement design, but also of the case, the caseback, the bracelet and the folding clasp. To achieve this degree of thinness, you not only have to review your way of thinking, but you must also draw upon a wide range of skills, play with multiple materials and adapt to a multitude of new constraints. In this sense, the Octo Finissimo Ultra is unquestionably the ultimate complication in this vast field of possibilities represented by ultra-miniaturisation.” Bulgari Octo Finissimo Ultra is the thinnest mechanical watch in the world now.