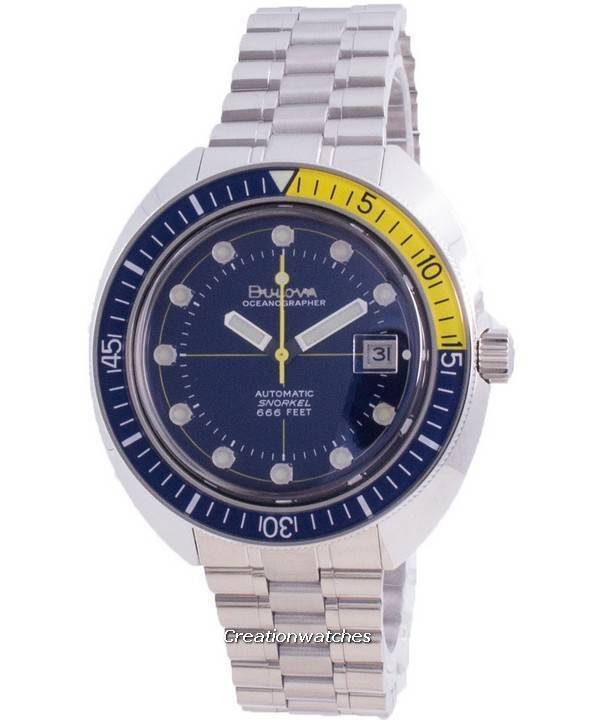 Why such a name?

The number 666, in modern popular culture, is a widely – probably the most – recognized symbol for the Antichrist; the Devil. Certainly, you cannot purportedly invoke Satan or the Devil wearing one of these; neither will they take you down to the depths of Hell. But truth be told, you can wear it fearlessly to hellish atmospheres on the land or under the sea and still find it gleaming, shining and performing in an awesome manner even long after the ordeal ends.

Getting to the Devil…sorry, the details

The idea of reintroducing old watches from their roster is an idea Bulova had hit quite some time back; the Devil Diver showed up once more, based on one of their vintage designs. The Oceanographer Devil Diver from the 1970s is a limited edition watch that’s historically accurate; more accurate than many other so-called re-issues.

The Bulova Oceanographer got its fame not for being a part of any special underwater mission; neither was it something that legendary divers wore on a regular basis. It exhibits no new mechanical invention in the world of underwater timekeeping. But well, it delivers the feel of being an aquanaut (as Bulova claims it and well, it does that up to a great deal) and makes you feel like one, despite snorkeling is not exactly the most glamorous activity for underwater exploration.

Whether the old Oceanographer or the new one; they are great watches alright, but so are (and were) many other watches of today and the yore. Bulova applied a rather tricky approach here; they decided to print the depth rating on the dial. Thus appeared the moniker of the Devil Diver! It’s certainly more interesting than putting up Snorkel or something equivalent alone.

There’s something more to the Devil Diver, which sets it apart from the rest of the dive (or dive-styled) and no, that’s not its bi-color, rotating bezel. Look into the hour markers and to your surprise, you’ll find they are embedded, transparent tubes/cylinders, filled with luminous material!

How Bulova portrays the Oceanographer

All that been said and heard, let’s end with something else that Bulova once spoke about the Devil Diver:

The Bulova Oceanographer is designed for the man who is very brave. Or, slightly crazy!

Following is the link for the Bulova Oceanographer Devil Diver watch discussed above. Click on the link to see and buy. For other Bulova watches, please click on the second link.