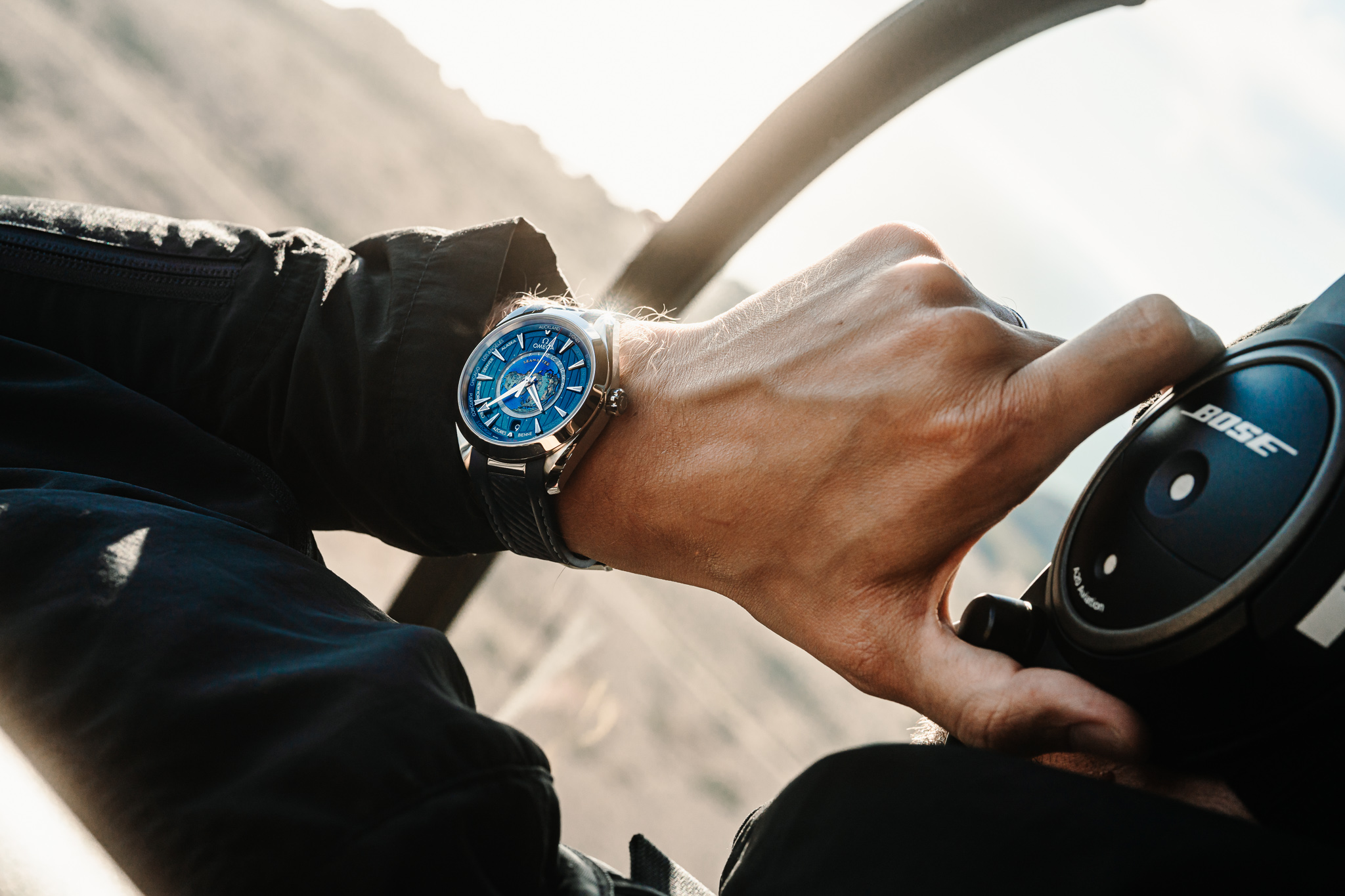 The sun isn’t supposed to shine like this on the Northern California coast. Well, not this time of year, anyway — and most certainly not around this hour in the evening. But here we are — skimming alongside the Marin Headlands in a crimson Robinson R44 with nary a patch of fog to be seen, the late-summer sun bathing the cabin in a warm glow. The pilot banks hard at historic Point Bonita and points the four-seater northwest, leaving the weathered mid-century lighthouse to fade into the San Francisco skyline, a white speck behind the tail rotor. As the Robinson’s shadow speeds along the jagged shoreline some 1200 feet below, I tap the shoulder of professional photographer Michael Lax who’s sitting in the front seat, and signal with my open palm and forearm out over the vast Pacific, “Farallones!” I exclaim into the headset. He swings his 70-200mm lens in the direction of the islands’ jagged silhouette, lying faint and low in the distant horizon, and snaps off a few shots. Michael is wearing the Omega Seamaster Aqua Terra Worldtimer — a dramatic, stainless steel specimen whose laser-ablated dial details look a lot like the myriad of colors painted below, where the Pacific, cold and turquoise, collides with muscular orange cliffs. It’s a strikingly appropriate watch for a mission to explore the many textures of this stretch of coastline from above, and a watch that functionally and faithfully continues the traditions of geologic survey established by its predecessor: the Aqua Terra GMT “GoodPlanet” edition. 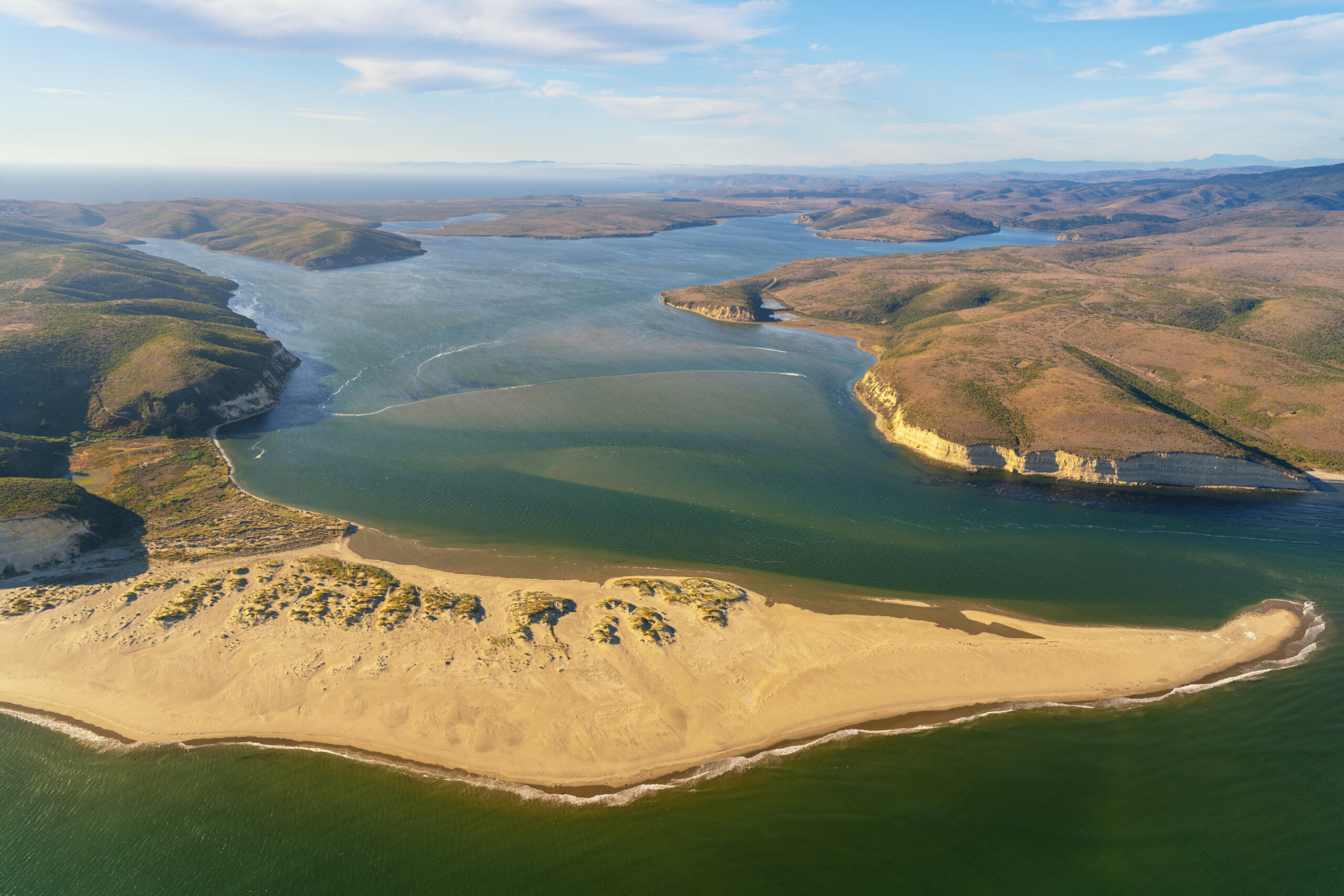 Seventy-one percent. That’s how much of the planet is covered with water — a figure that’s summarized in abundantly clear fashion through the expanse of blue spread across the Aqua Terra’s Worldtimer dial. But rather than deploying the traditional watchmaking techniques of hand-applied blue lacquer paint or fired enamel most typically used to render such bodies of water on high-end worldtimer watch dials, Omega has, conversely, employed a far more modern approach: taking a titanium disc and zapping it with a laser at varying heats and intensities to color in the oceans and apply actual texture and structure to coastlines and landmasses. The three-dimensional effect is at once striking and jarringly realistic, and it puts the Aqua Terra Worldtimer in rarified company — here, you have a travel-ready GMT watch powered by an industry-leading, Master Chronometer-certified automatic movement that displays 24 of the world’s time zones, and does so with an artfully created dial that’s protected by a sculpted 43mm stainless steel case with 150 meters of water resistance. There’s simply nothing quite like it. 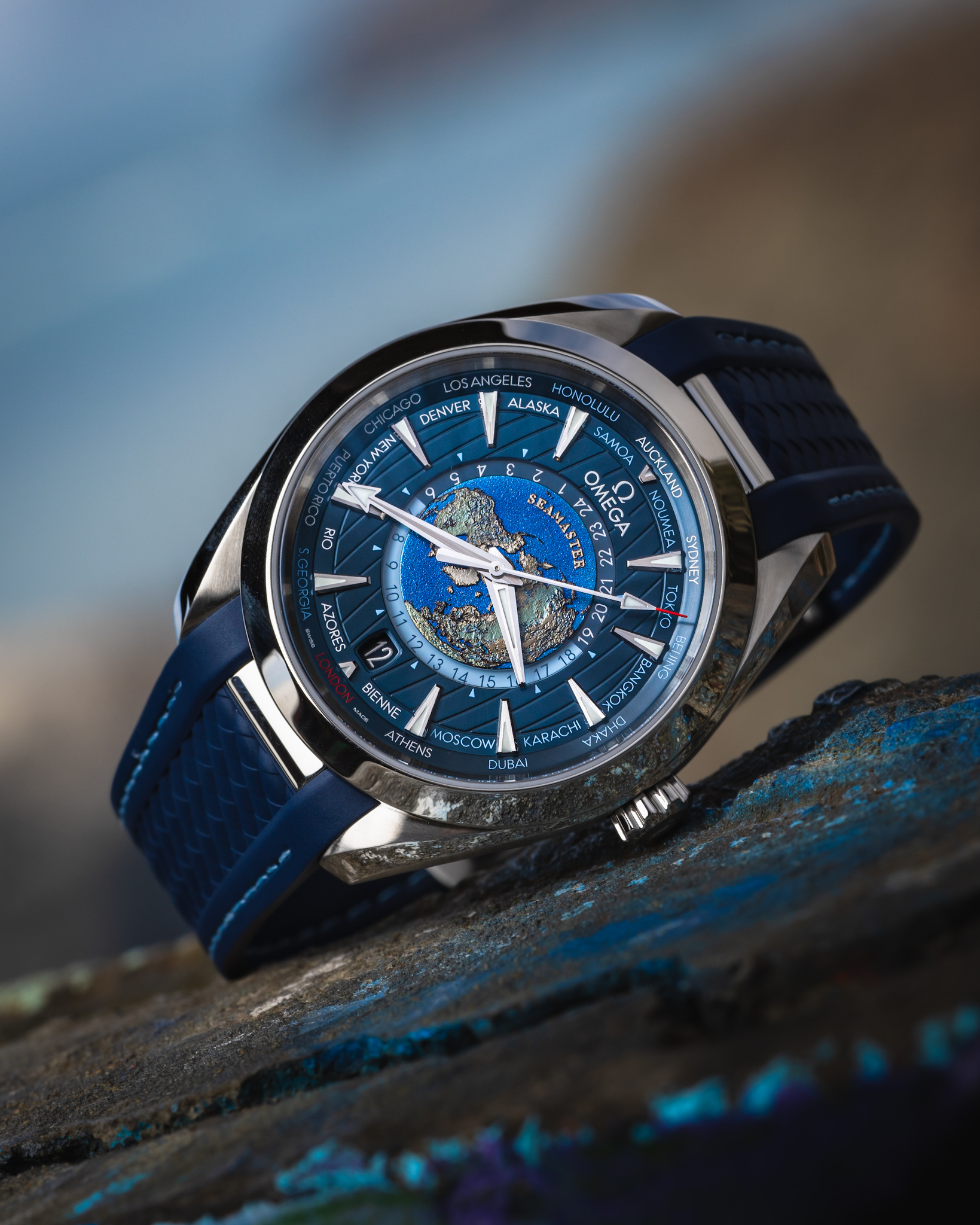 Our destination lies on the western edge of California, a veritable speck hidden deep within the Aqua Terra’s dial. It’s the northern corner of the Gulf of the Farallones National Marine Sanctuary, a body of water spanning some 1,300 square miles, and containing innumerable marine life and historical shipwrecks — the latter of which are both documented and undiscovered, alike. Guarding this watery expanse from the cliffs above and warning mariners of the dangerous shoreline is the Point Reyes Light Station, a 16-sided forged iron structure bolted to solid rock at the tip of the hook-shaped peninsula. Lighthouses are a fixture all up and down the Pacific coastline, but in the era before GPS and autopilot, it was a particularly critical countermeasure in this region, which routinely measures some of the highest wind speeds on California’s coast. But not tonight — those notorious winds have abated just enough to give us a clear flight path all the way to the lighthouse. 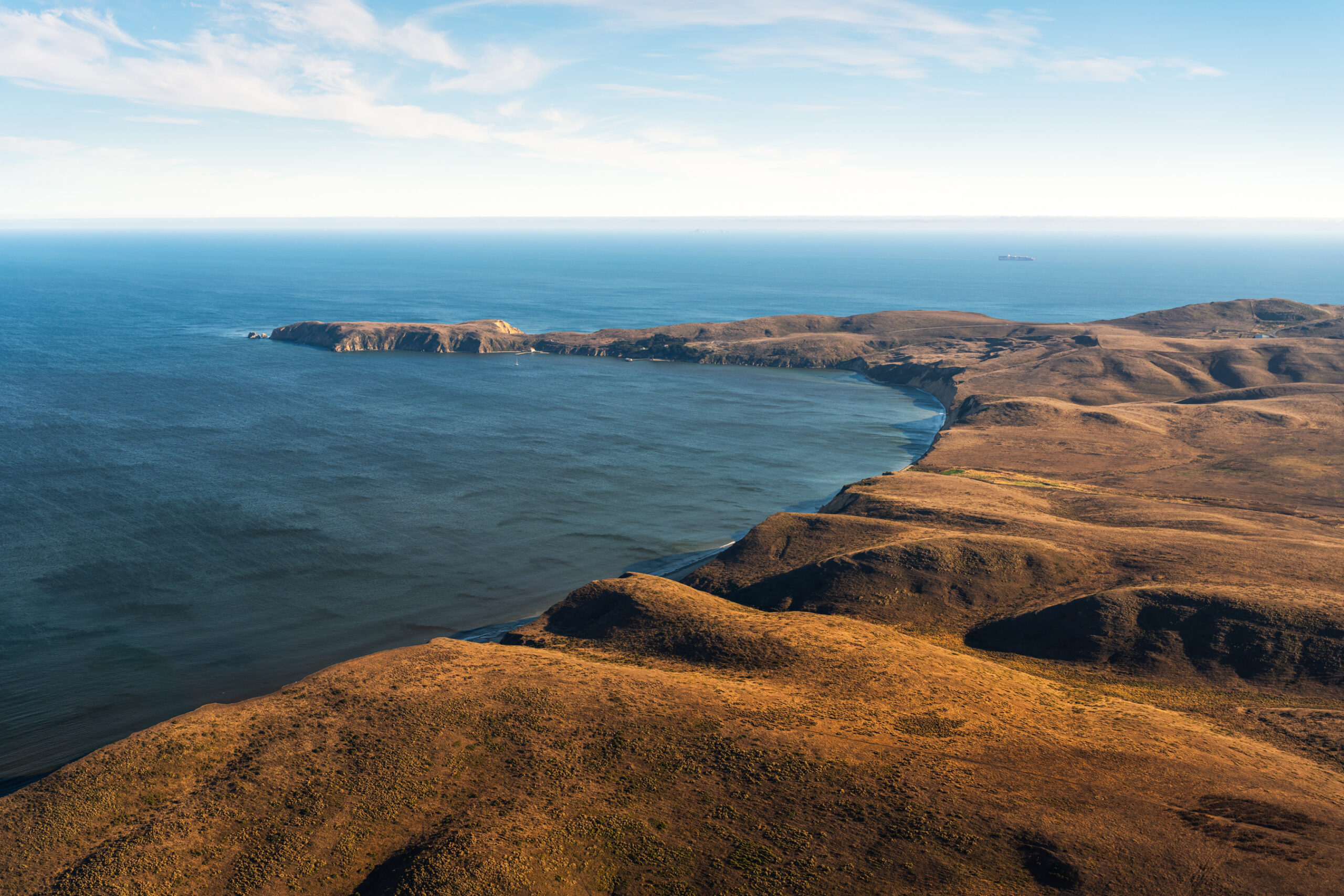 Of course, its METAS-certified chronometry, water resistance, and general ergonomics aren’t the only tricks the Aqua Terra Worldtimer has up its sleeve — it has one more feature that’s actually quite uncommon on other traditional worldtimers, and one that’s hidden in plain view. Occupying the center of the dial is, of course, a map of the world — albeit a flattened one, rendered in what’s known as a “Peirce Quincuncial” map projection, which places the North Pole at its center. Invented in 1879 by mathematician and scientist Charles Sanders Peirce, this projection looks a bit like a traditional Gnomic projection without compressing or exaggerating the land masses. 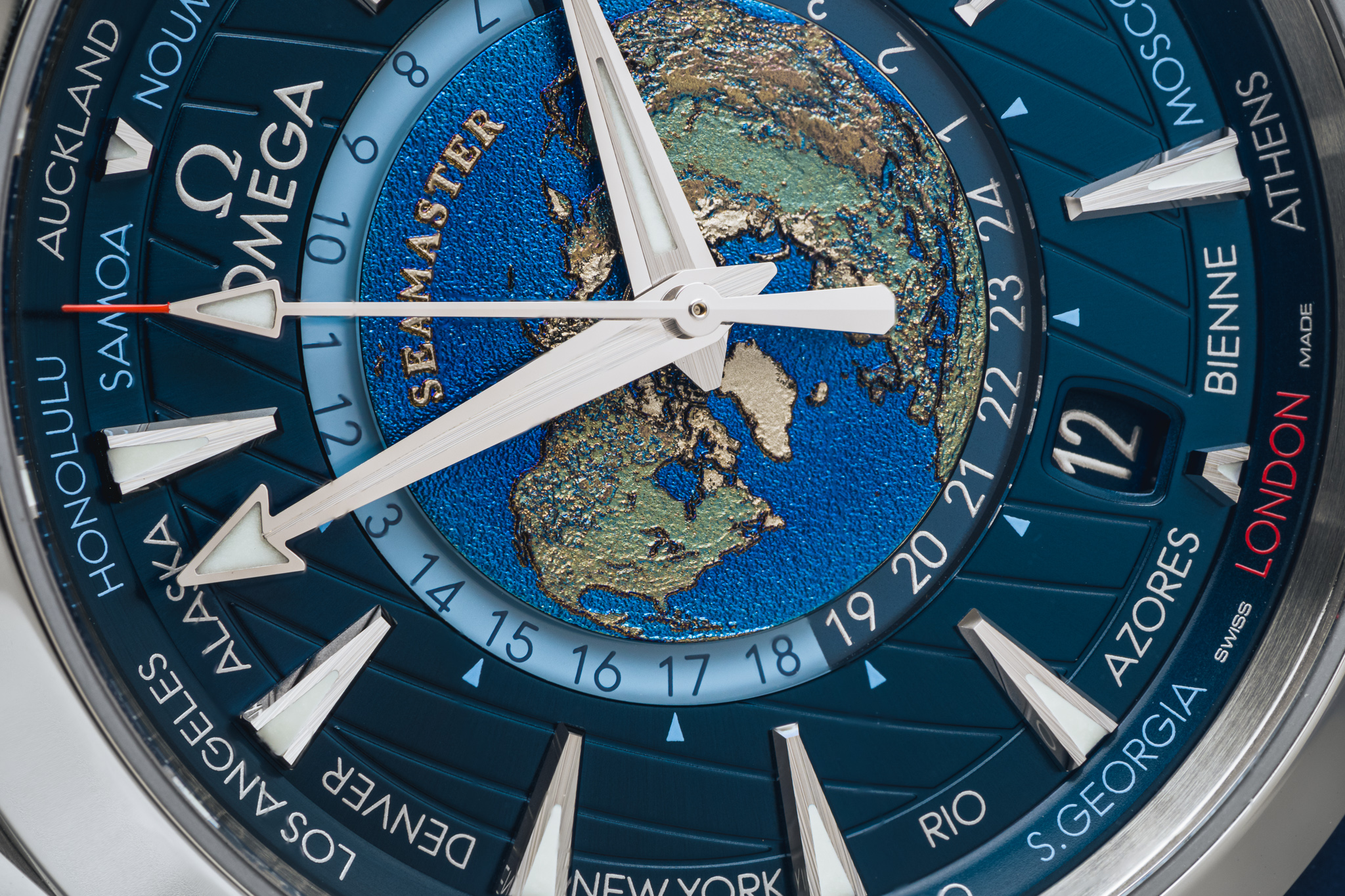 In this projection example, we’re presented with the planet in a conformal square, with the exceptions of each of the four outermost corners, which would otherwise comprise the continent of Antarctica. Once cropped to a circle to accommodate the conventions of a watch dial, what you’re left with is a unique display of six of the seven continents. But more importantly, when encircled by a rotating Hesalite 24-hour ring, each of the 24 time zones directly correlates to the time zone of its closest landmass at the center of the dial — simply locate your city’s approximate location on the map and draw an imaginary straight line toward the closest number on the ring. Of course, it’s probably easier to read the time against the 24 cities around the dial’s periphery, but it’s quite a neat Easter egg that comes in handy should your local city or town not be one of the 24 metropolitan regions featured in the dial’s periphery. 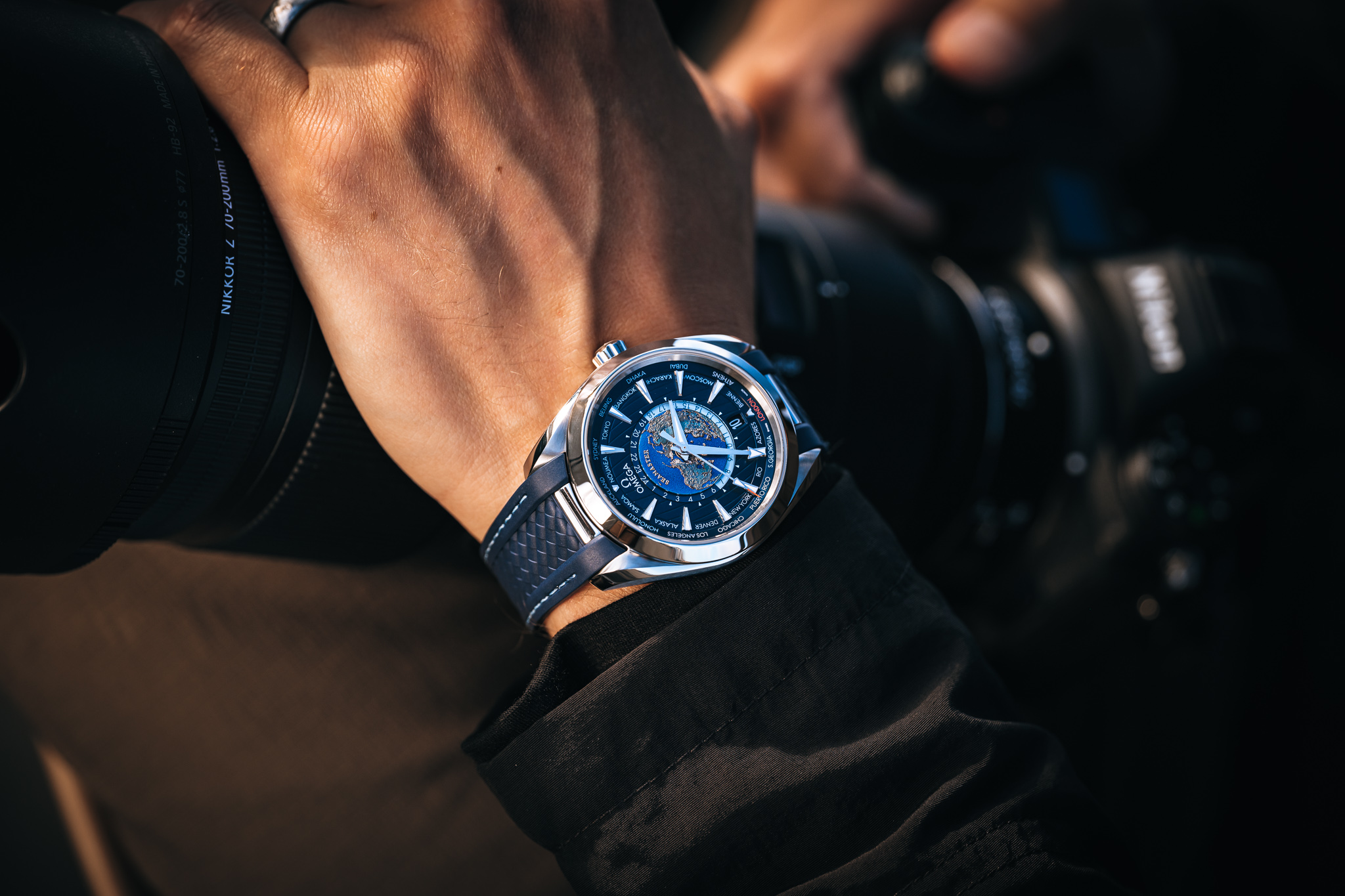 Nearly 45 minutes into the flight, we’re at our farthest point from the helipad and are speeding our way along the arrow-straight sands framing Point Reyes Beach, lining up a clear shot at the lighthouse perched on the edge of the peninsula. This evening, in particular, has presented us with an exceptionally rare opportunity — a warm, coastal photo window unimpeded by neither fog nor wind. Historically, Point Reyes is a notoriously moody, challenging environment to photograph, due in part to the unpredictability of its fog — a weather condition so perilous and omnipresent, it even inspired a supernatural thriller from John Carpenter in 1980, appropriately titled “The Fog,” which was filmed on the very steps of the very lighthouse below that’s just come into view. But it’s that unpredictability and these challenging, moody microclimates that drew professional photographer Michael Lax to the San Francisco Bay Area — a former Michigan native who’s been shooting landscape and automotive imagery professionally here for a little over a decade, and who routinely seeks out inspiration along the rugged cliffs splayed out below. 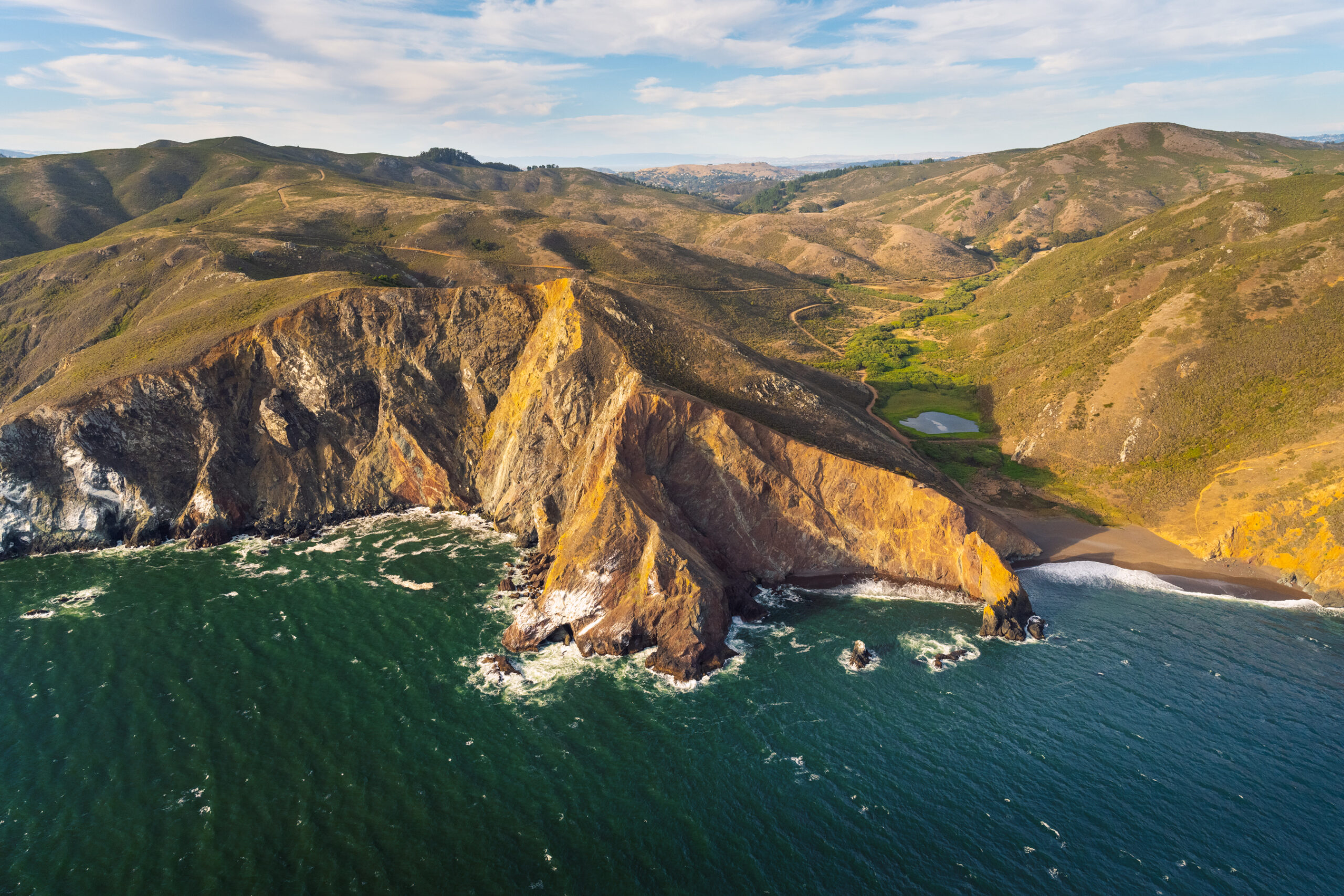 Few modern sports watches so effortlessly blend capability and design intent as well as the Aqua Terra, but it should come as little surprise — that intent is broadcast right there in the name, which suggests the watch is best suited for a life of exploration, be it on sea or land. In many ways, the Aqua Terra Worldtimer feels like a spiritual extension to Omega’s own GoodPlanet initiative from 2011, launched through a partnership with French conservationist and photographer Yann Arthus-Bertrand. Pulling similar inspiration from the world’s wildest places, the primary goal of the initiative was to raise awareness for the many environmental issues we face while promoting more sustainable means of living on the planet. Omega’s dedication to the cause feels as though it’s come full circle with a watch that not only unites the planet’s key time zones but also visually articulates the physical places we call home together with the bodies of water that make life on this blue marble possible — all with an intricately detailed dial. 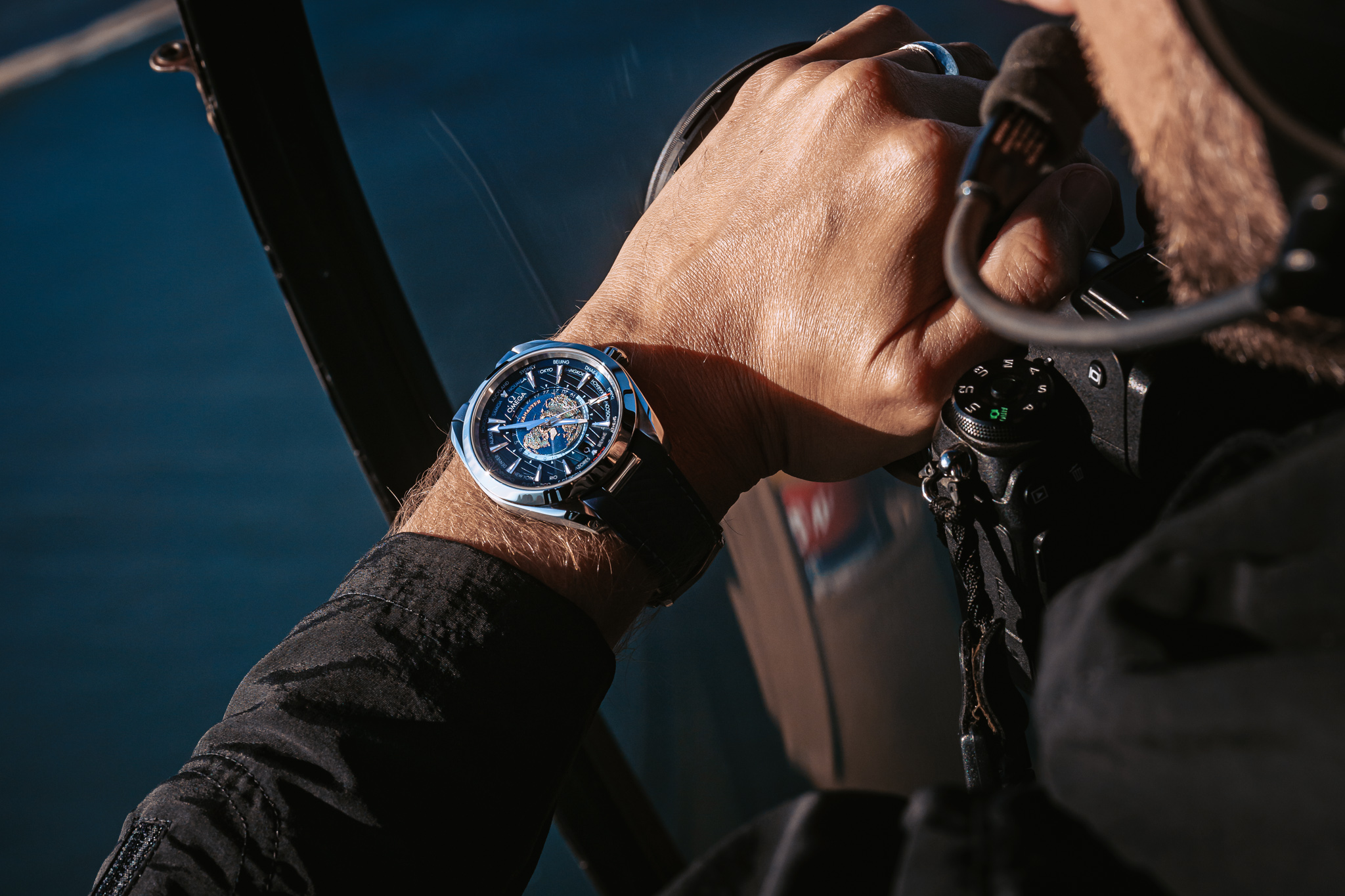 “Awright, fellas, here we go,” crackles our pilot’s voice through the headset. We don’t have quite enough fuel in our safety buffer to linger or take a second pass, and home is still a long way away, so Michael is only going to get one shot. The Robinson banks hard to the left, tipping the open left side of the aircraft down towards the lighthouse, now framed by glowing orange cliffs and the crashing waves of the Pacific. The fingertips of the peninsula are perpendicular to the helicopter for only a few seconds, and then just like that, we’re clear — the moment we chased all summer is suddenly over, and we’re speeding back the way we came. 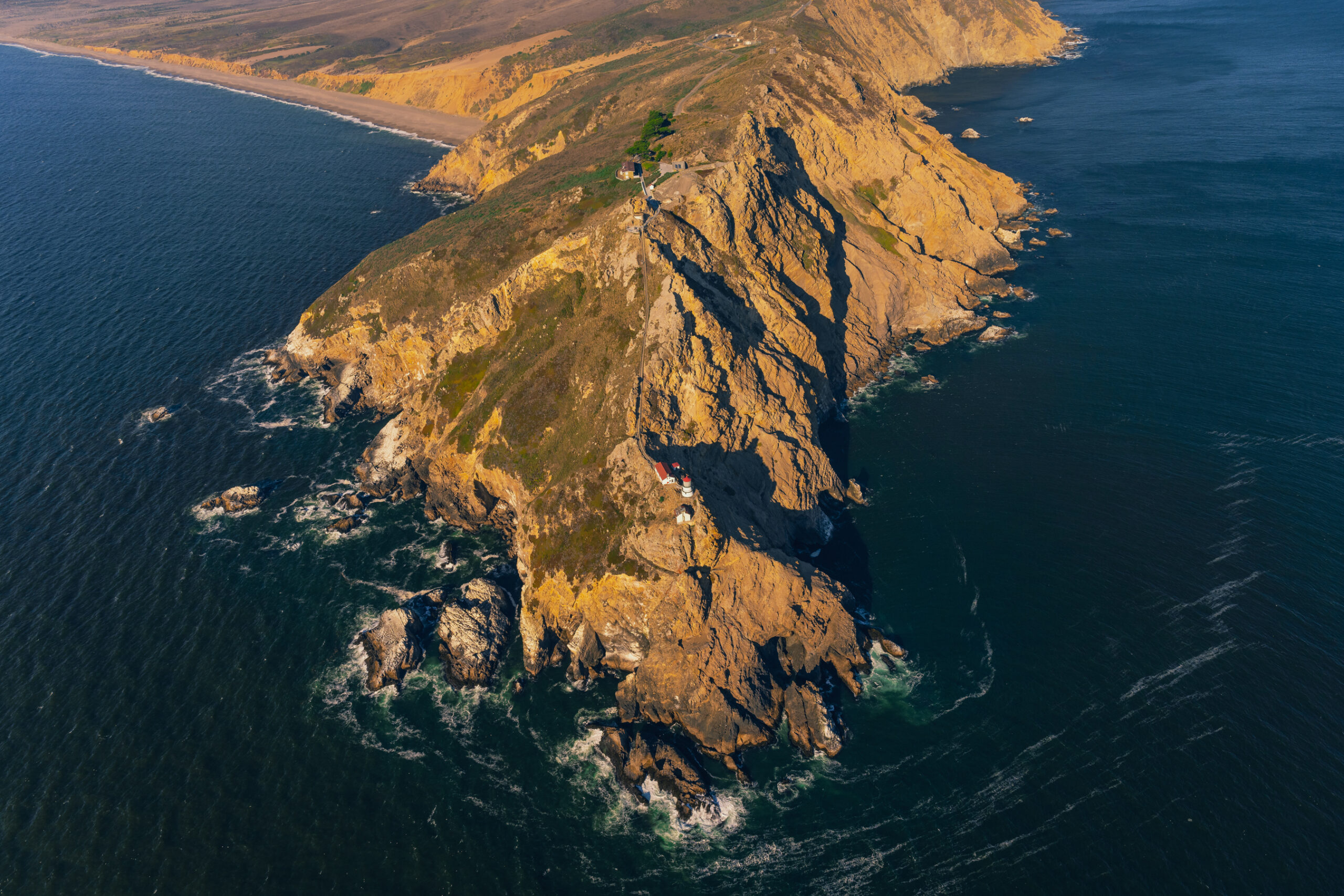 Available on either an integrated rubber strap or a brushed and polished three-link stainless steel bracelet, the Seamaster Aqua Terra Worldtimer starts at a price of $8.900 USD. You can learn more about the full Seamaster Aqua Terra collection at the Omega website right here. 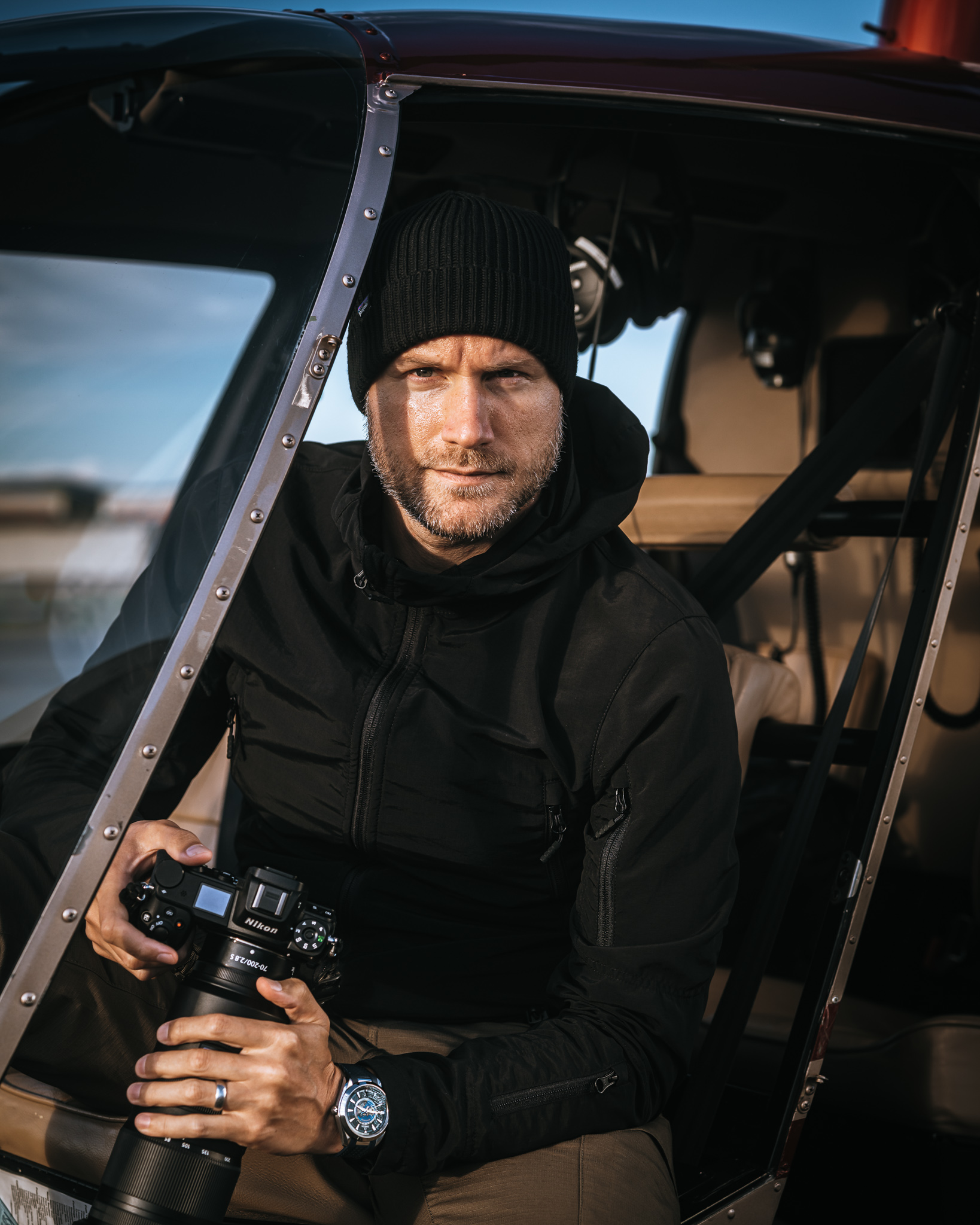