There’s no bigger event on the Hollywood calendar than Oscars night. Just look at the red carpet. Everyone one in the movie business lucky enough to score an invite—from studio execs to cast and crew—goes all out to look their best. Doing so is about more than just finding the right outfit—its also about finding the right accessories to put your look over the top. And for men, this means picking the right timepiece.

Below, all of the watches that stopped us in our tracks at this year’s 94th annual Academy Awards. 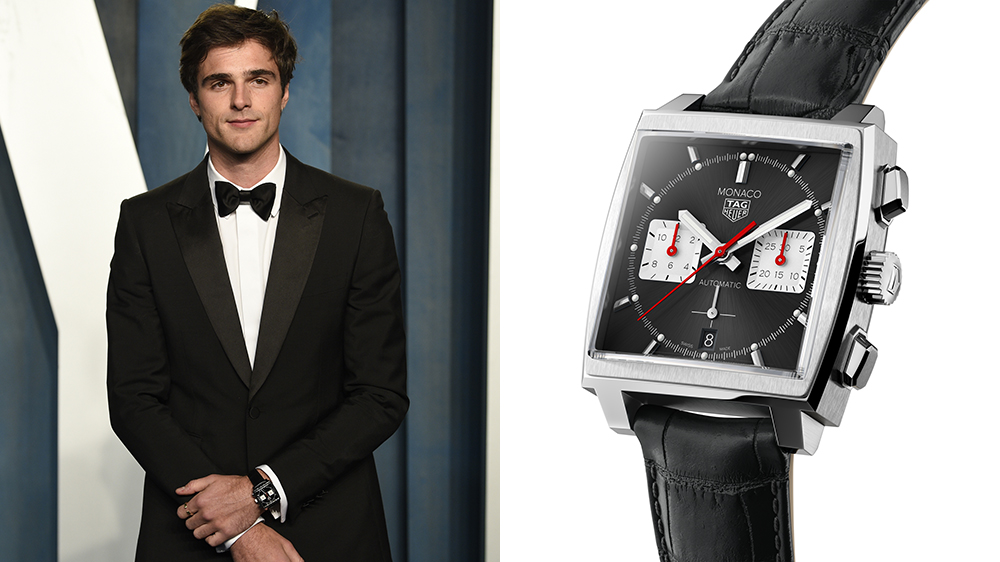 What better watch to wear to your first Oscars than one closely associated with one of film history’s greatest leading men, Steve McQueen. That seems to have been Euphoria star Jacob Elordi’s thinking, at least. The up and comer wore a sporty-but-classy Tag Heuer Monaco with a black dial while walking the red carpet. 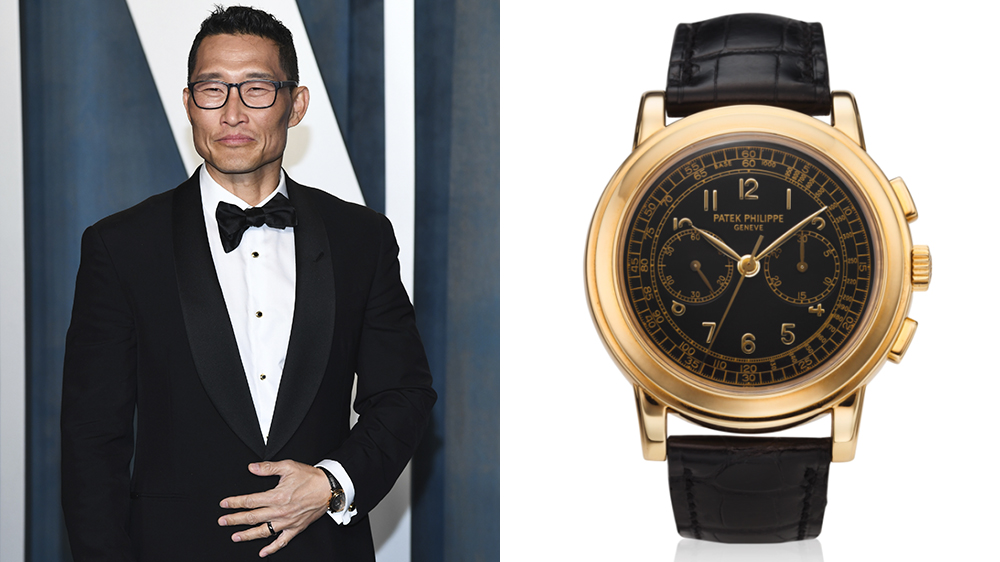 A big night calls for a big watch. So Daniel Dae Kim appears to have gone with a vintage Patek Phillipe. The watch, which dates back to 1999, is an 18k gold chronograph with an intricate black and gold dial. It’s a true horological beauty, which explains why someone bought one at Sotheby’s Important Watches sale for $60,000 last summer. 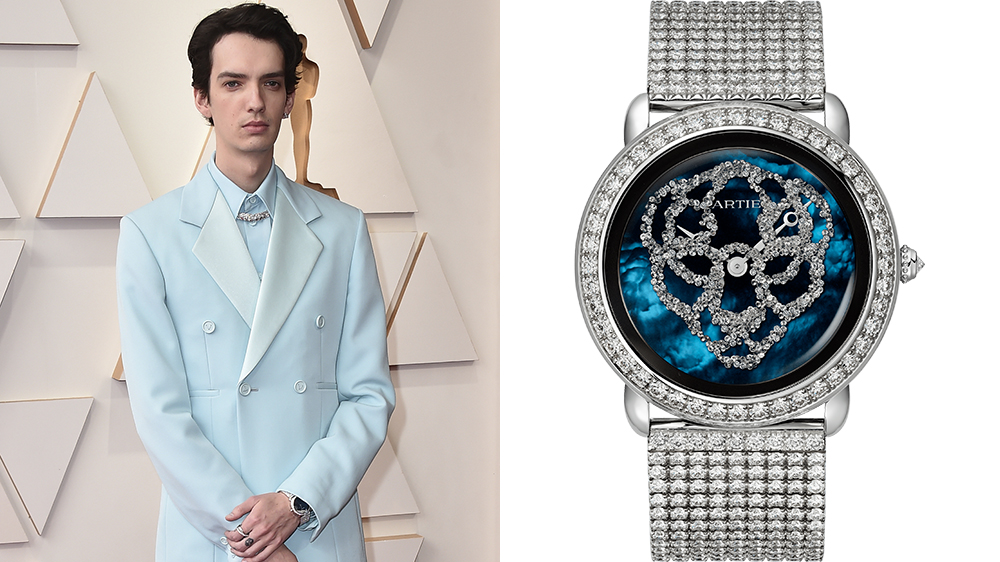 Best Supporting Actor nominee Kodi Smit-McPhee’s Cartier timepiece made loud and clear that he’s not a child actor anymore. The Power of the Dog star wore a dazzling 18-karat Revelation d’Une Panthere dripping in diamonds from bezel to band. 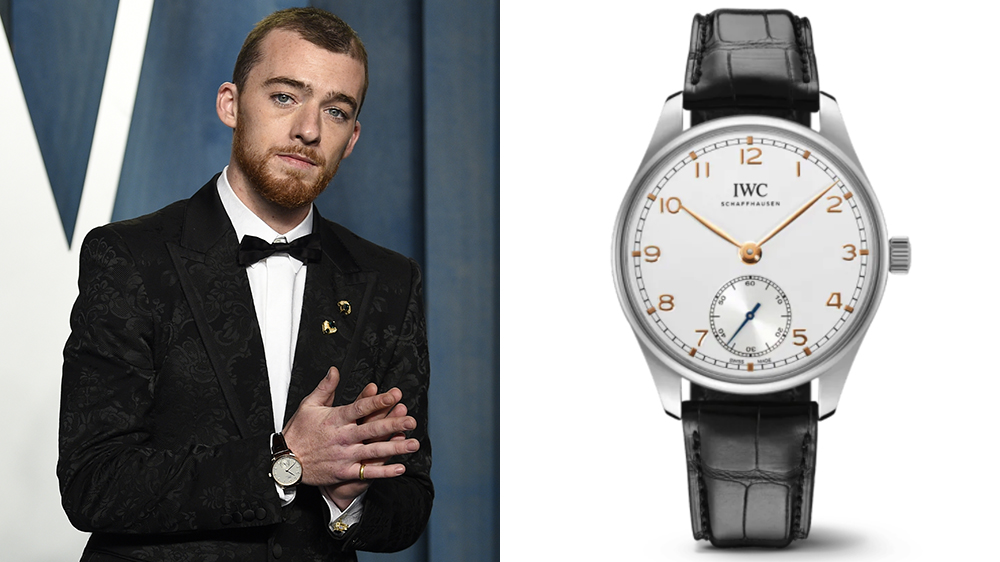 Jacob Elordi’s and Angus Cloud’s Euphoria characters may not have much in common, but both actors share a love of fine watches. Cloud went for a slightly more traditional look than his castmate, opting for what looks like a silver IWC Portugieser, with a white and gold dial and a black alligator leather strap. 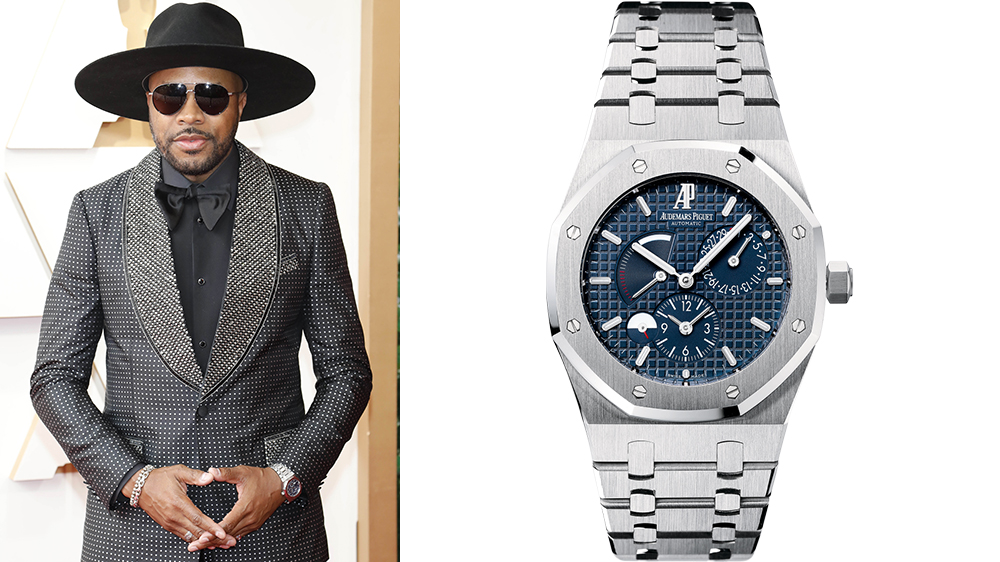 DJ D-Nice knows you can’t go wrong with a Royal Oak. That’s why the musician was spotted wearing what appears to be a Royal Oak Dual Time on the red carpet at Sunday night’s show. The silver watch is always a crowd pleaser, but the grid-like pattern on its dial also matched quite nicely with that of his tuxedo jacket. 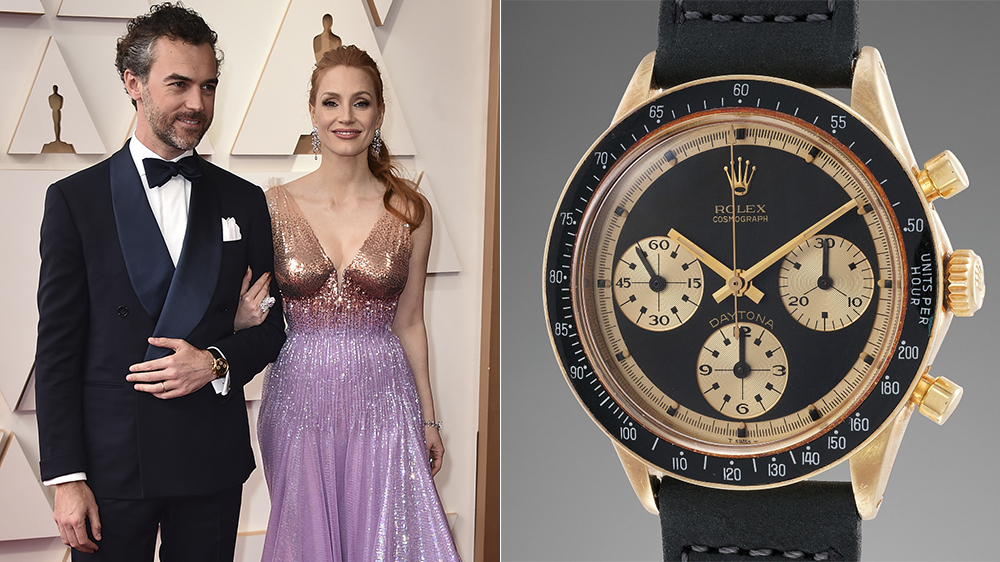 Even if Sunday was about his wife, Oscar-winner Jessica Chastain, Gian Luca Passi de Preposulo knew he could still have a little fun. That’s why the Moncler executive paired a classic but understated tux with what appears to be a vintage Rolex Daytona with a gold case and black bracelet. 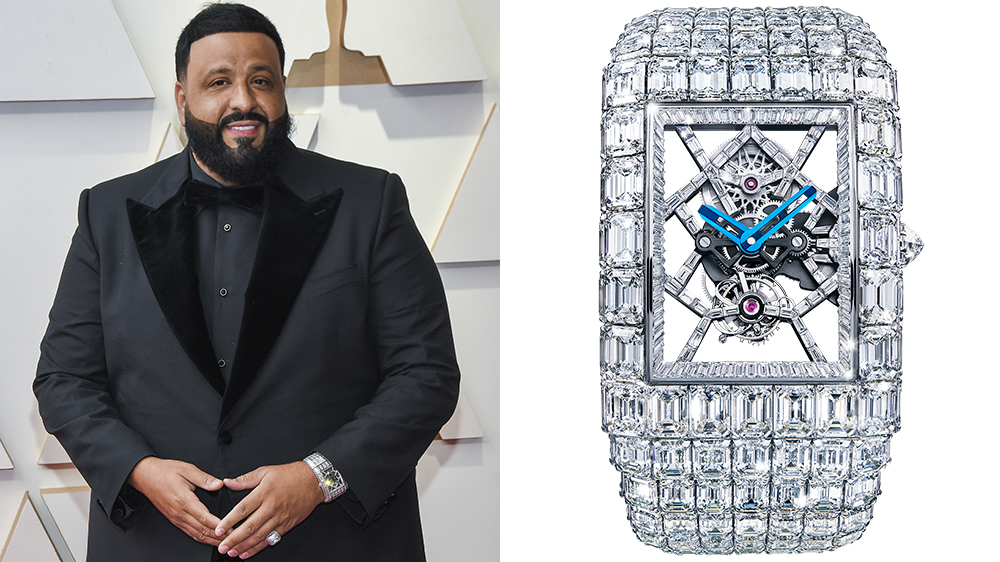 If you’ve listened to any of DJ Khaled’s chart-smashing songs, you know he’s a maximalist. True to form, the ultra-successful producer complemented his all-black look with what appears to be a Jacob & Co. Billionaire, a timepiece encrusted with a stunning 189 carats of diamonds. 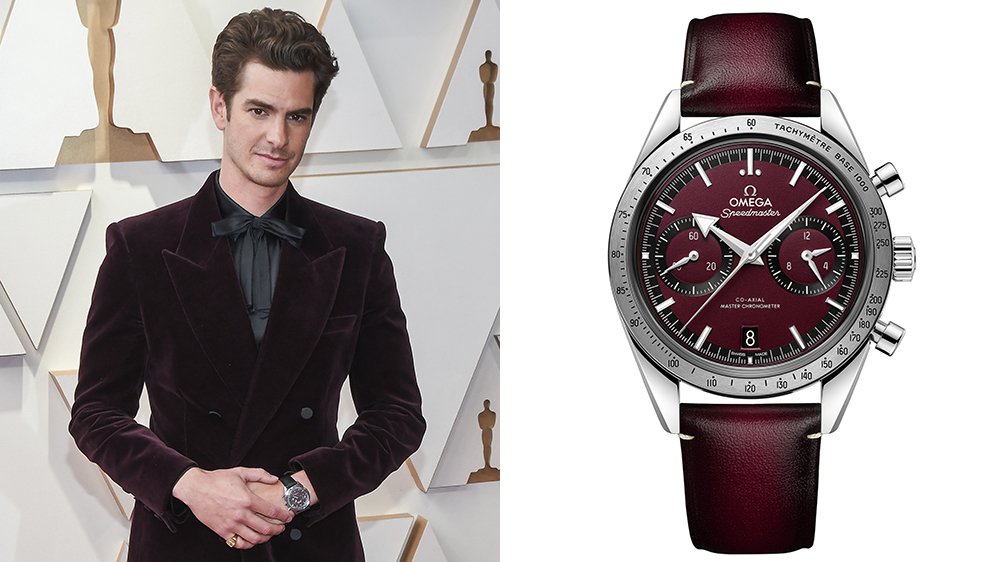 Best Actor nominee Andrew Garfield didn’t just opt for a watch that complemented his tux, he found one that matched it perfectly. The actor was lucky enough to obtain a version of the new smaller and slimmer Speedmaster ’57 that has a red dial the same hue as his velvet jacket and a black leather strap that went with his pants and shirt. 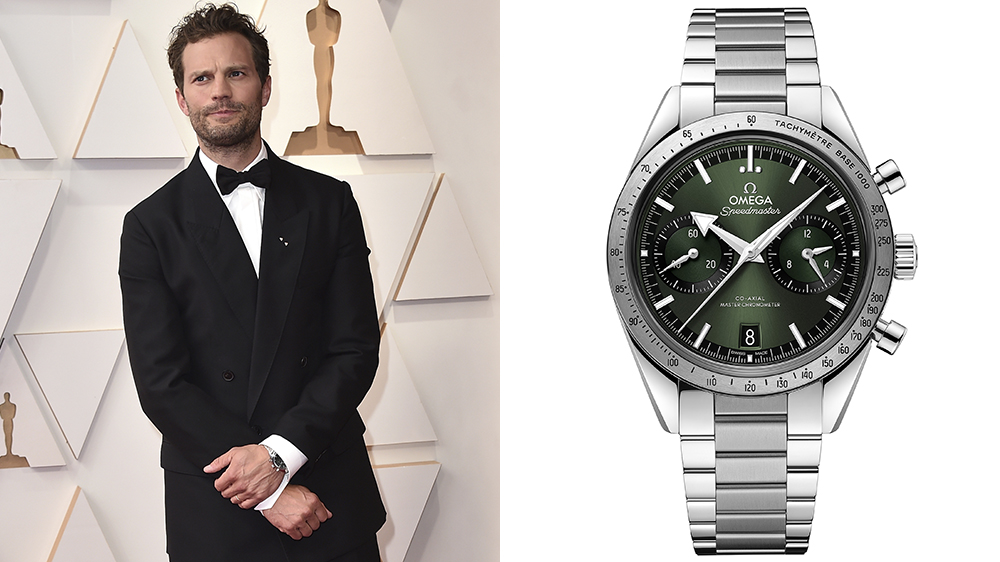 Garfield wasn’t the only nominee rocking the new Speedmaster ’57. Belfast star Jamie Dornan wore an even sportier version of the manual-winding chronograph—this one with a rich green dial and metal bracelet. 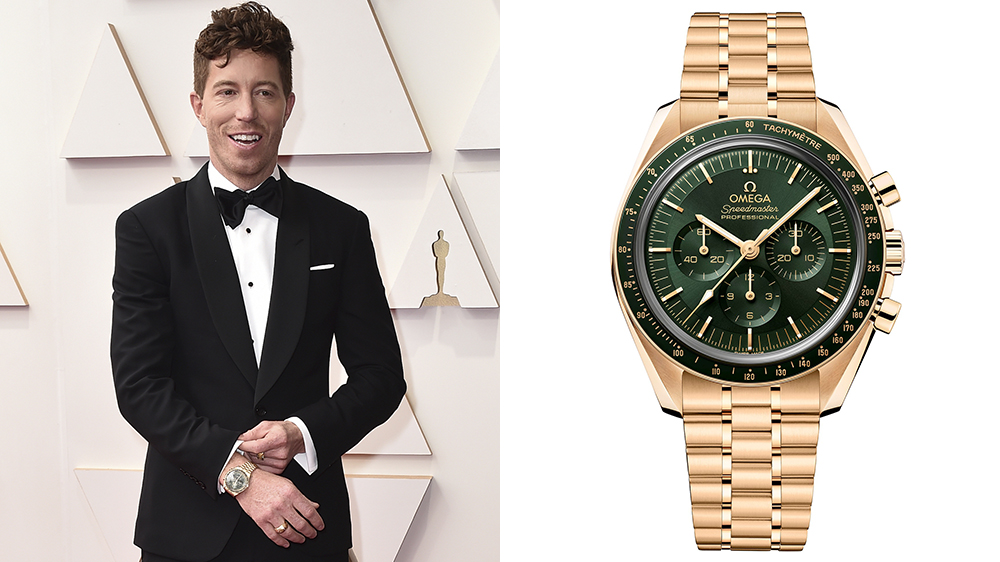 Shaun White may not have been ripping tricks on a half-pipe on Sunday, but he was still in his element. The three-time Olympic gold medalist wore a very apt Moonshine Gold version of the new Moonwatch, with a matching bracelet and green dial, to the awards show. 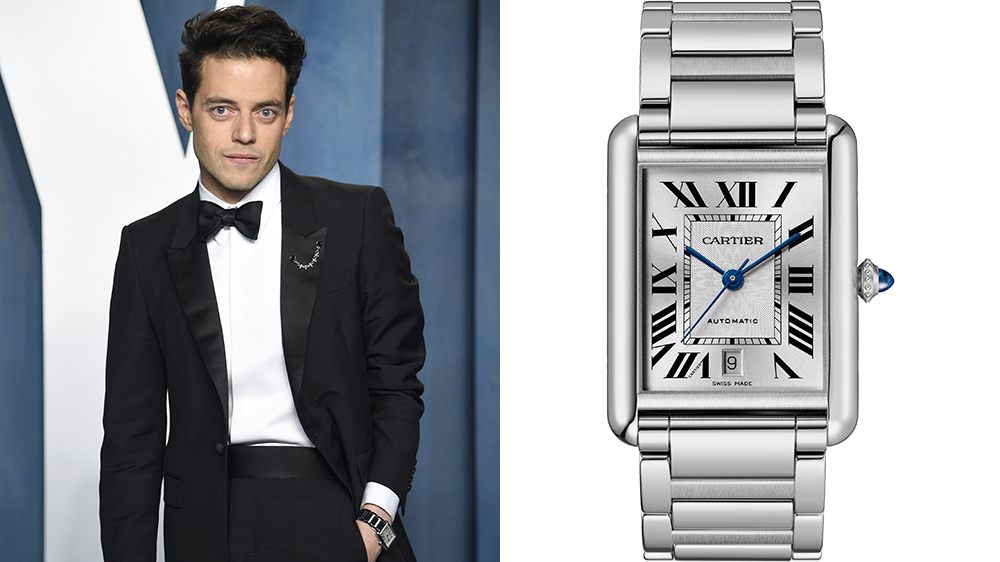 With an Oscar already at home, Bohemian Rhapsody star Remi Malek knows what it takes to look sharp at the Oscars. This year that meant pairing a classic tux with a number of Cartier accessories, including a lapel pin and a sophisticated Tank watch. 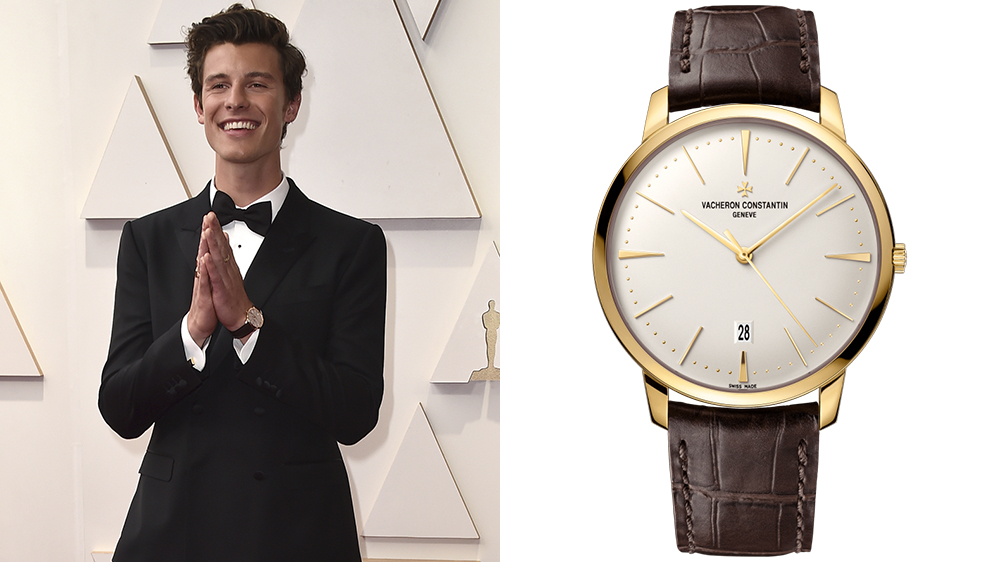 Malek wasn’t the only star who looked like they’d walked out of Hollywood’s golden age on Sunday. Musician Shawn Mendes also went for a very classic look, accenting it with a gloriously dressy Vacheron Constantin Patrimony. 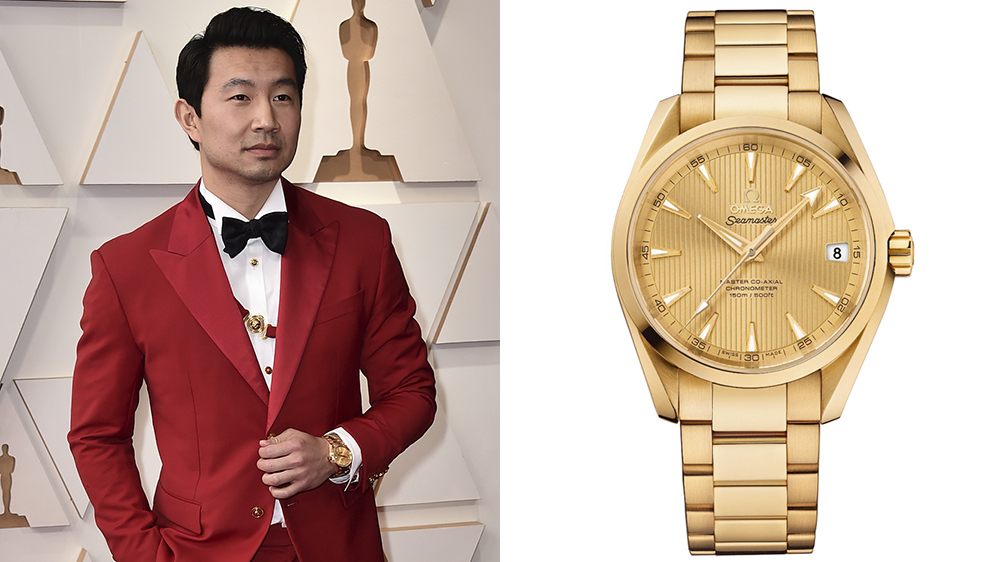 Shang-Chi and the Legend of the Ten Rings star Simu Liu may still be waiting for his first Oscar nom, but that didn’t stop him from showing off at this year’s show. Just in case his all-red tux wasn’t bold enough, the actor paired it with Seamaster Aqua Terra made from 18k yellow gold.