The watch industry congregated at its first major post-Covid event tonight in Geneva to honor its own at the Grand Prix d’Horlogerie de Genève, the Oscars of watchmaking. Eighty-four finalists competed in 12 categories for the awards, which are all then eligible for the top prize, the Aiguille D’Or, along with other special awards, including for Innovation, Audacity, Challenge, Horological Revelation and Petite Aiguille.

As a member of the Academy of the GPHG, I participated in the judging for the preliminary round of the competition, helping to narrow down the nominees to the 84 finalists. Being a watch lover, poring over the contenders is a little like binging on your favorite Netflix series, but it’s also a challenge, since competition is fierce, and each of the finalists in the competition has its own special merits. The panel of 10 judges who made the final decision (which did not include me) had a tough choice, but the winners speak for themselves.

This year, the top award goes to Bulgari for the Octo Finissimo Titanium Perpetual Calendar. As the world’s slimmest perpetual calendar, its case measures only 5.8 mm thick, and represents one of Bulgari’s seven world records for micro-watchmaking. The movement, the caliber BVL 305, is only 2.75 mm thick, and the extremely lightweight titanium only adds to the feeling of weightlessness. “This is the first time an Italian-born  brand has won a GPHG,” pointed out Bulgari CEO Jean-Christophe Babin when accepting the award. “It is an example of Italian genius and obsession for details.”

One of the top categories is the Best Chronograph, as it is usually awarded to a watch that is mostly likely to, or already has become, a collectors’ item. Needless to say, it’s a tight race. This year’s winner is the Zenith Chronomaster Sport, the modern version of the 1960s icon, the first chronograph to use a high-frequency (36,000vph) movement, the El Primero. The winning model contains an updated version of that movement, the caliber 3600, which can measure and display elapsed time to 1/10th of a second. That means the central chronograph hand dramatically makes one turn every 10 seconds around the dial. Design features inspired by early models include the black bezel and pump style pushers, overlapping subdials in three colors, tipped stick hands and a ladder-style bracelet. “This is the first time Zenith has received the Chronograph award for its high-frequency movements,” said Zenith CEO Julien Tornare. “I dedicate this award to the eight men responsible for creating the original version in the 1960s. I met them recently, and they remain our inspiration for the innovation and creativity of our brand going forward.”

The Tourbillon prize was awarded to another favorite in the competition, the De Bethune Kind of Two Tourbillon, a double-dialed complication representing modern design on one side—a 30-second tourbillon anchored by a large deltoid-shaped bridge—and on the reverse, a more traditional, guilloché dial with central hours, minutes and seconds.

Capturing another competitive category, the best Men’s Watch prize, was Grand Seiko for its Hi-Beat 36000 80 Hours Caliber 9SA5. The movement oscillates at 36,000 vph, compared to the standard 28,000, and has an accuracy rating of +5/-3 seconds per day. Two mainspring barrels give it an 80-hour power reserve. The textured dial is inspired by the white birch tree forests that grow in northern parts of Japan, as seen near the Grand Seiko Studio Shizukuishi where all Grand Seiko mechanical watches are made. 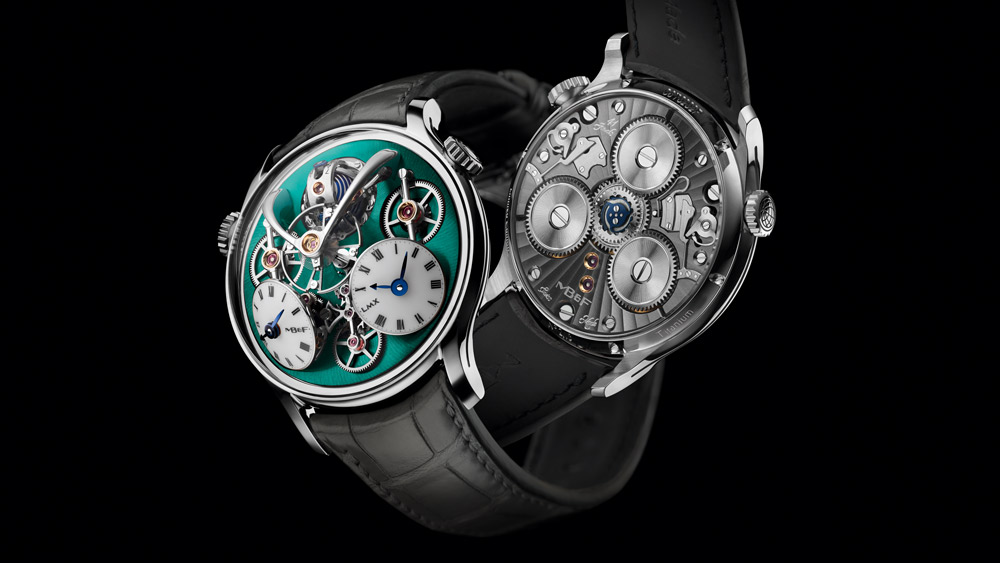 Two awards went to elite independent brand MB&F. For best Men’s Complication, its LMX Titanium, with a central flying balance wheel and two raised and angled time dials, and an exposed movement was the crowned winner. The company also won the Artistic Crafts Category for the LM SE Eddy Jaquet Around the World in Eighty Days, thanks to its intricate dial hand-carved by master engraver Eddy Jaquet over a period of two years.

But there were plenty of other winners, take a look at the full list of all 2021 GPHG awards below: