Compared to the drama of Greubel Forsey’s generally theatrical approach to watch design, the Double Balancier Convexe—the latest in its series of double balance wheel complications—bears the quality of a toned-down classic.

It is part of the brand’s recent shift toward modern, sporty and (relatively) more accessible pieces with subtler finishes, fewer bulging subdials and less color. Prices are also being toned down, lowered from around $500,000 to around $300,000 (the Double Balancier Convexe starts at $340,000).

“The previous strategy was to dedicate production aimed at collectors, which was very niche,” says CEO Antonio Calce, who took the reins of the brand in 2020. “Our goal now is to open a new product segment with a new product offer.” Still well into the six figures, however, Greubel Forsey timepieces remain for the very privileged few.

The Double Balancier Convexe is a composition in three colors: black (plates), white (bridges, hands, indexes and seconds dial) and gold (gears and wheels, including balance wheels). The bezel is sleek, with brushed, polished and chamfered finishes rather than the engraved bezels we’ve seen on other Greubel Forsey models. The overall design is as elegant and classically finished as something this high-tech and modern gets. All of its drama lies in the depth. 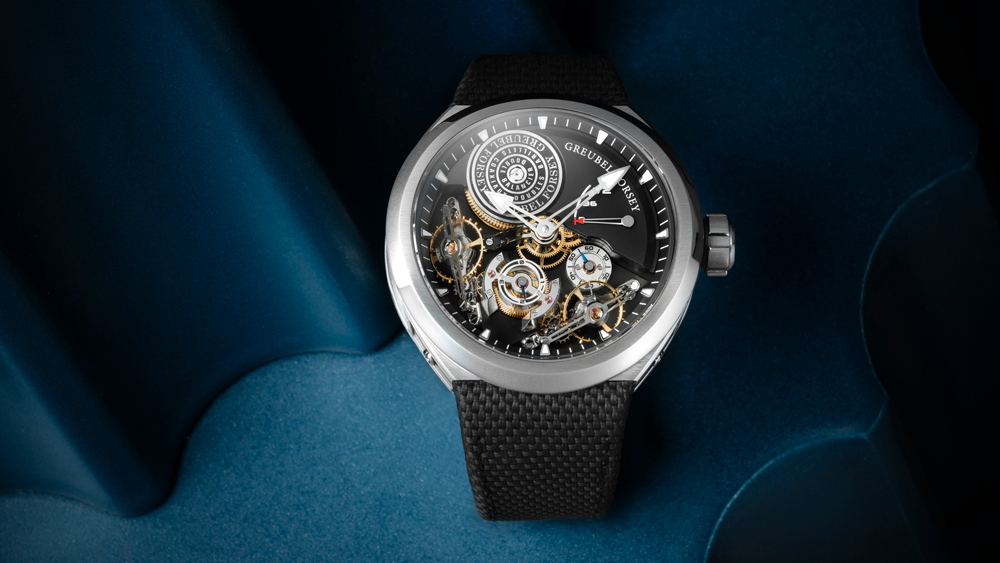 The case depth runs from 14.35 to 13.75 mm, tapering down gradually from the crystal toward the wrist—a design that accommodates the spherical differential and double-balance-wheel architecture of the movement without feeling too bulky. The gear train emerges from underneath a blackened titanium bridge, at the edge of which the hour and minute hands tower above the wheels on the central pinion. Below that is a multi-level movement construction, with each of the two balances occupying a separate plane. The chapter ring takes a near-vertical plunge along the flange, with lacquered indexes and polished hour markers that cling to the edge as if skiing downhill into the movement. 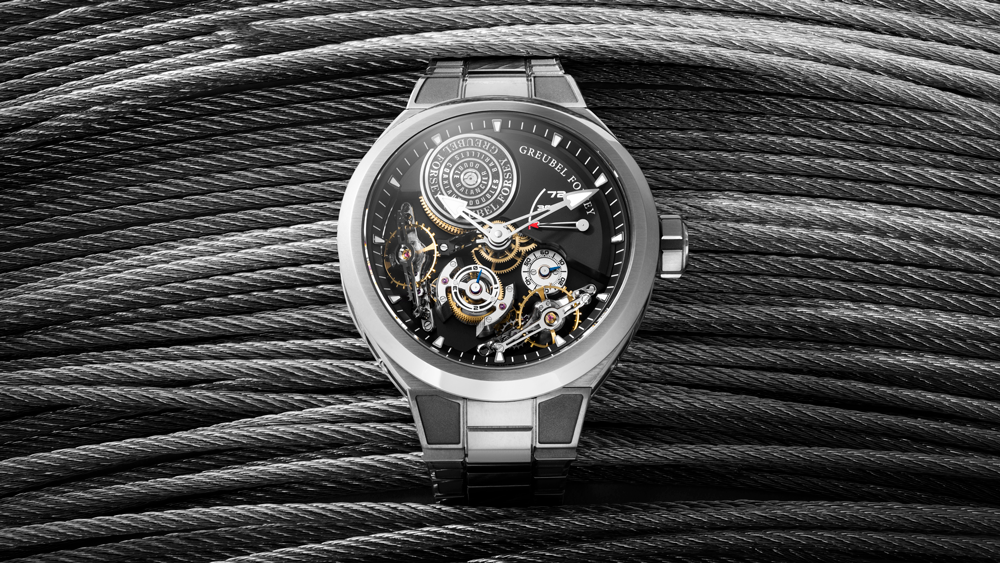 The watch has two patents relating to the two balance wheels, which are separated and inclined at 30 degrees while being linked by a constant spherical differentiator that provides constant power distribution to the mechanism.

The titanium case tapers in width from 46.5 mm at the point of the bezel, to 43.5 mm at the wrist. Greubel Forsey describes it as a “variable-geometry” construction, the result of a complex shaping and finishing process that raised significant technical challenges for the company—making the sapphire crystal fit the curve of the case without distorting the view and arranging movement components on a multi-level, curved plane. The shape not only beautifully hugs the curve of the wrist but also looks cool, opening up the view of the 3D composition like a modern curio cabinet on the wrist. 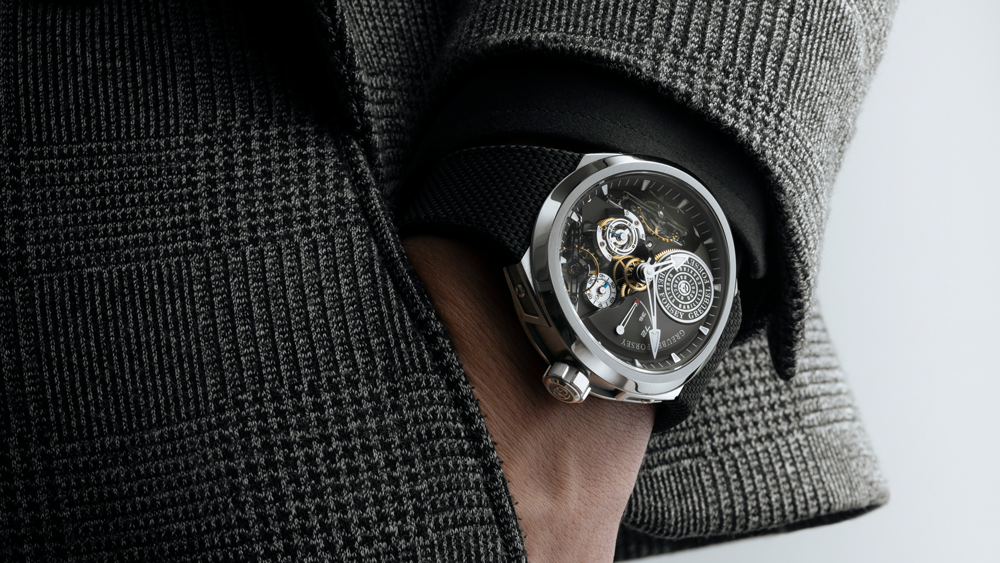 Every component is hand-finished. The titanium bridges and mainplate are blackened and frosted. Balance bridges are polished to the hilt, and the relief-engraved text that once covered the bezel of older models now appears, in truncated form, on the barrel cover where it tells us the maker, the model and the fact that it contains double barrels and double balances.

The manual-wound movement is made up of 374 components, with double mainsprings for a 72-hour power reserve. Hour and minute hands, which are likewise curved to conform to the case shape, are generously filled with Super-LumiNova. The small seconds and four-minute hand indicate the rotational speed of the spherical differential are in polished blued steel while the power reserve is indicated by a polished and openworked hand with a red tip. Only 22 pieces of the Double Balancier Convexe will be made per year between 2022 and 2024, for a total of 66 pieces overall. It will run you $340,000 on a rubber strap or $385,000 on a metal bracelet.