We all secretly know that most people who own dive watches seldom use them for diving. What most people love about dive watches are their sporty instrumental looks and robust, all-terrain characteristics. If you were to combine these traits with a groovy multi-coloured decompression table on the dial, you would be looking at Mido’s highly original and collectable Ocean Star Decompression Timer 1961 reintroduced last year. All 1,961 pieces of the inaugural “Rainbow” were sold out before they even reached retailers, which is hardly surprising given the attractive price tag. Following in its wake, Mido introduces a second version of its vintage diver with an even funkier colour scheme that is closer to the 1961 original. With its attractive combination of 1960s styling and Swatch Group’s latest-generation calibre 80, the latest “Rainbow” is going to fly off the shelves. 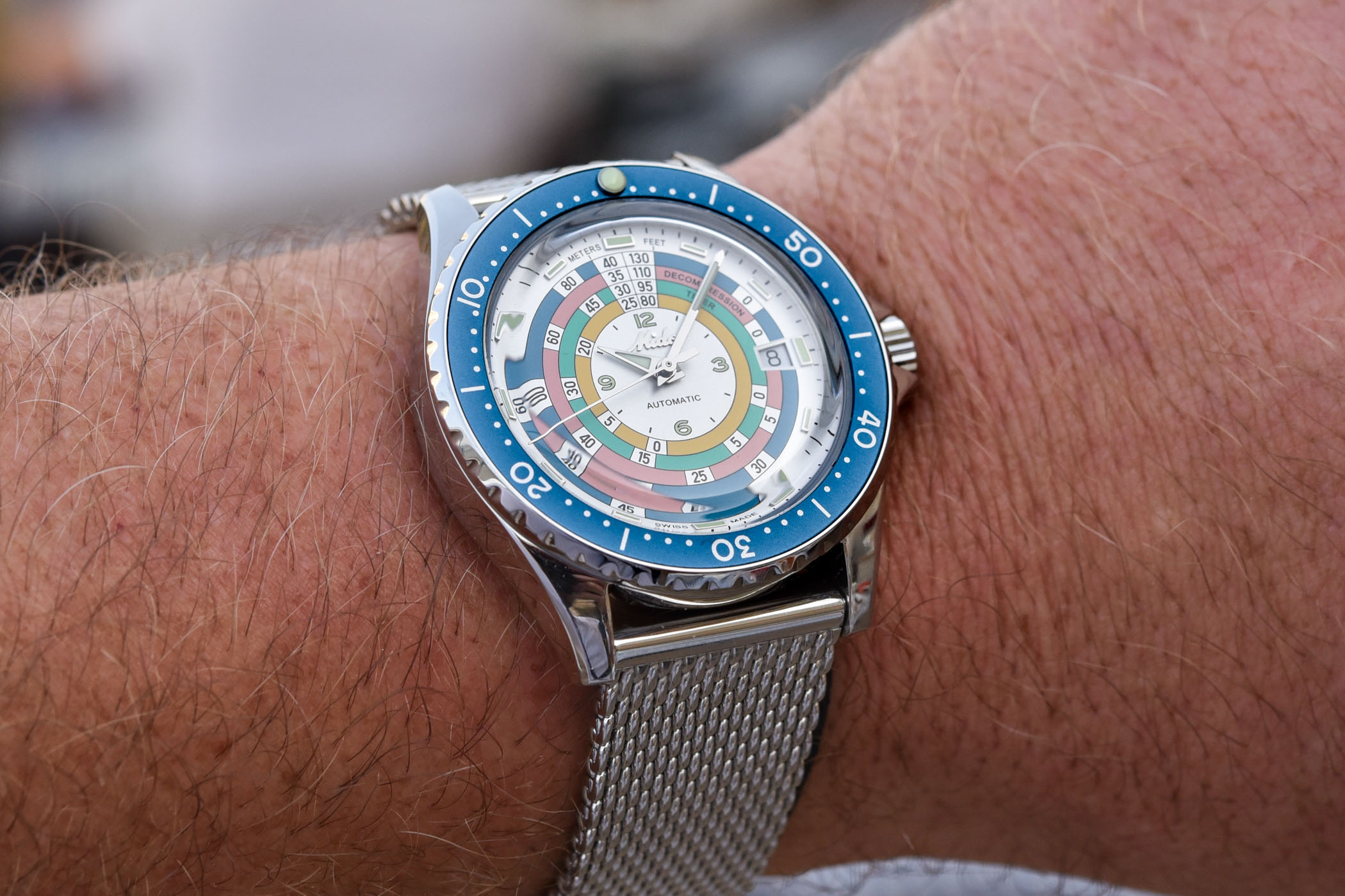 To give the watch some context, in 1961, Soviet cosmonaut Yuri Gagarin became the first person in space and construction on the Berlin Wall to separate East and West Germany commenced. Meanwhile, back in Switzerland, Mido was manufacturing the Powerwind Diver 1000, a certified dive watch with 300m water-resistance, a bidirectional rotating bezel and a colourful dial with concentric scales to mark diving decompression times at different depths. Considered one of the rarest watches produced by Mido, some collectors are willing to pay up to USD 10,000 for a vintage “Rainbow” in good nick.

Founded in 1918, Mido would become a pioneer in the development of waterproof watches in the early 1930s. Its Aquadura crown sealing system of 1930, with a cork gasket on the crown to prevent water and dust from entering the movement, paved the way for more robust dive watches. In 1934, the Multifort appeared, a robust, automatic, anti-magnetic watch with built-in water and shock-resistance that would become a best-seller through to the 1950s. The Ocean Star family, with its starfish logo, was born in the early 1940s and evolved over the years to incorporate a single-shell (monocoque) case and the brand’s Aquadura cork crown-sealing mechanism to increase the water-resistance of the watch. The 1959 Powerwind 1000 dive watch, known as reference 5907, would become a star product with its multi-colour scales (in feet) representing decompression times on the dial. An incredible innovation at the time, the watch was the result of research undertaken with professional divers.

As Brice mentions in his coverage of the 2020 Mido Ocean Star Decompression Timer 1961 with a black bezel, the base for the watch is the Ocean Star 200 Tribute. The stainless steel case measures 40.5mm, rather compact but still larger than the 1961 original. The case is polished throughout, giving the watch a bright shiny presence and features two triangular crown guards and a knurled, unidirectional rotating bezel. This latest iteration comes with a turquoise anodised aluminium insert in the bezel with its 60-minute countdown scale in white and the dot of lume at noon. Consolidating its vintage appeal is the modern sapphire version of a glassbox-style crystal over the dial, which is less prone to scratches. To ensure the 200m water-resistance (less than the original model’s 300m rating), the crown and the caseback, engraved with the Mido starfish, are screwed down. 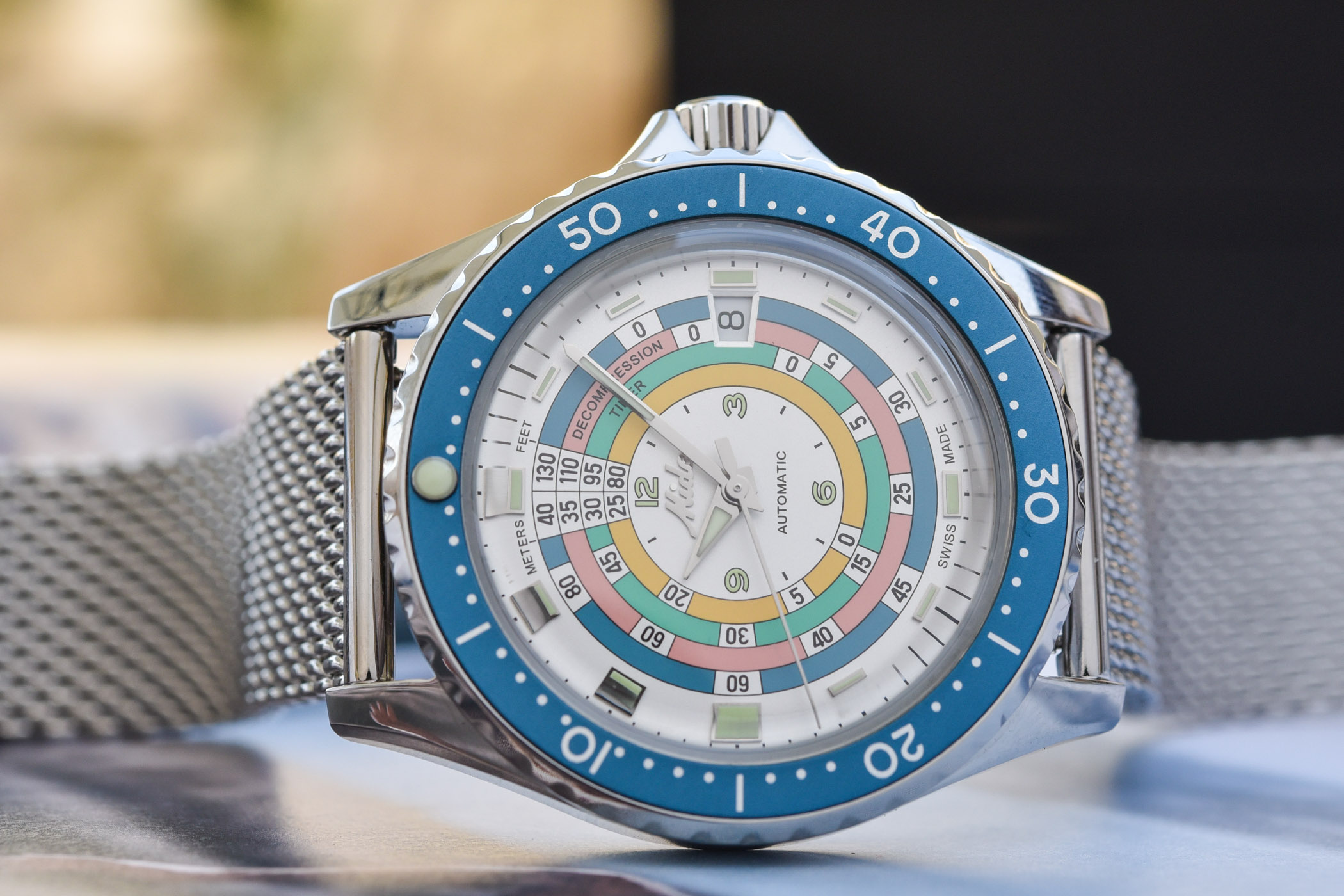 The cool turquoise colour of the bezel is picked up on the first concentric decompression ring on the dial. If you compare this model to the 1961 Rainbow Diver, you’ll see that the colour scheme is closer here than on the black dial model of 2020. In fact, the silvery-white background of the dial makes the dial seem larger and, in my opinion, even easier to consult than the black dial model. The depth is indicated at noon in metres and feet, and the decompression scale graduates from blue to pink and from green to yellow. Each scale represents a diving depth: yellow from 25 to 29 metres, green for 30 to 34 metres, pink for 35 to 39 meters and blue for 40 to 44 metres. By placing the minute hand at 12 o’clock before a dive, a diver could/can see whether a decompression period had to be observed when reascending and the duration of each stage. The silvery-white dial has applied rectangular indices with neutral Super-LumiNova, a date window at 3 o’clock and luminescent diamond-cut hour and minute hands.

Although the movement is hidden beneath the solid steel caseback, the Ocean Star 200C is powered by the Mido calibre 80 based on the ETA C07.621. Shared by some of the most accessible brands in Swatch Group, the Powermatic 80 is an evolution of the ETA 2824 architecture improved with a revised kinetic chain and lowered frequency. Now beating at 3Hz, it also has more than doubled its power reserve to 80 hours. It is presented in an élaboré grade and adjusted in three positions. 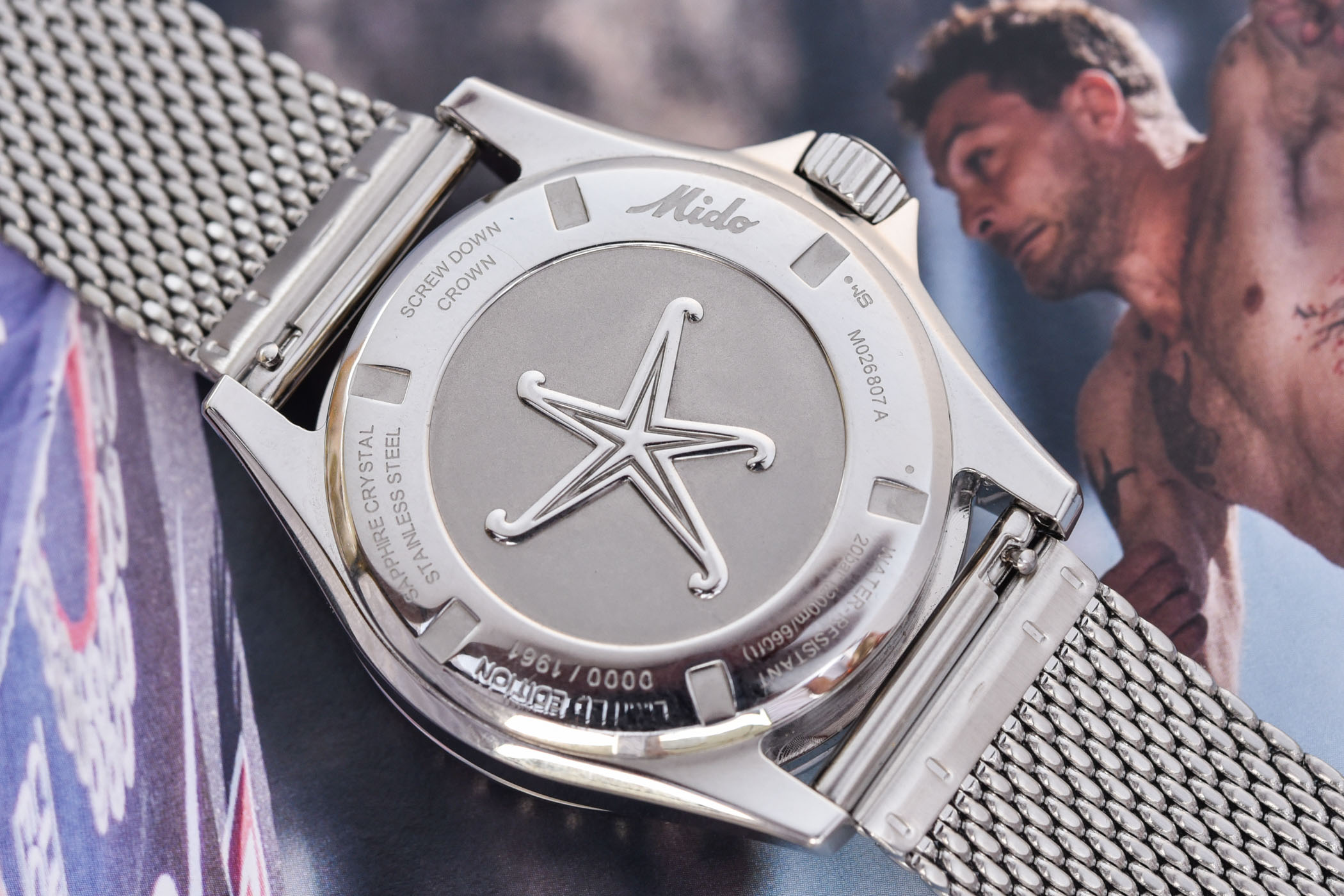 If you are looking for an original dive watch that evokes the 1960s to a tee and are not afraid of colours, the Mido Ocean Star Decompression Timer 1961 Turquoise is a solid candidate. Maybe the date window, which was not featured on the original, could have been left out of the package, but frankly, it’s not that jarring. Attractive and very different from your run-of-the-mill black dial diver, the Decompression Timer will undoubtedly be a conversation starter. And with its aggressive retail price, it’s the kind of watch some collectors could buy just for the fun of it. 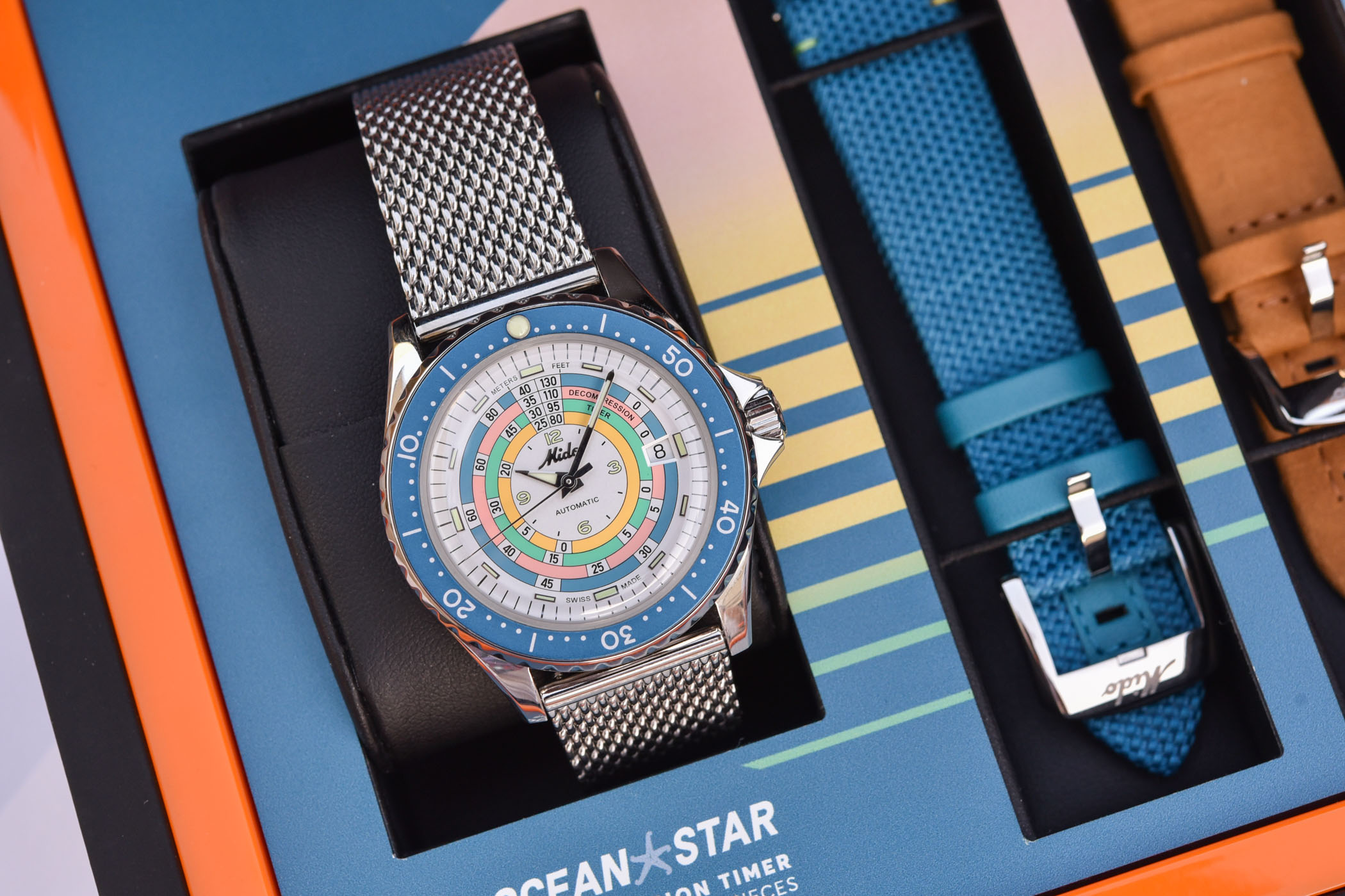 The Mido Ocean Star Decompression Timer 1961 Turquoise will be available in November. Limited to 1,961 pieces, the watch comes on a Milanese steel bracelet inside a special box with two additional straps: a traditional brown leather strap and a turquoise blue fabric strap with stitching to match the decompression table. The bracelet and straps can be exchanged easily with the quick-change spring bars. It will retail for EUR 1,150.