In late March 2021, Moritz Grossmann unveiled the Central Second, a new model in its Benu Heritage collection that shone a spotlight on the seconds that had navigated from their customary small seconds sub-dial to a central position. Although it might not sound like the most exciting news to reach horological spheres, the Central Second represents Moritz Grossmann’s first model with a central seconds hand; all previous models relied on small seconds, a feature that the founder, Carl Moritz Grossmann (1826-1885), patented in the mid-19th century. To accommodate the new central seconds configuration, the brand developed a new movement, calibre 100.11, a reworked version of calibre 100.1 featured on the Moritz Grossmann XII Birthday Edition. Like everything that emerges from this manufacture, the first impression might not elicit fireworks, but the more you discover, the more you learn to love these watches, especially when you find out how the ingenious stop-seconds mechanism has been incorporated on this deceptively simple watch. The Central Second is available in a limited 25-piece salmon dial edition or a more contemporary blue dial with luminescent hands and numerals, as seen today. 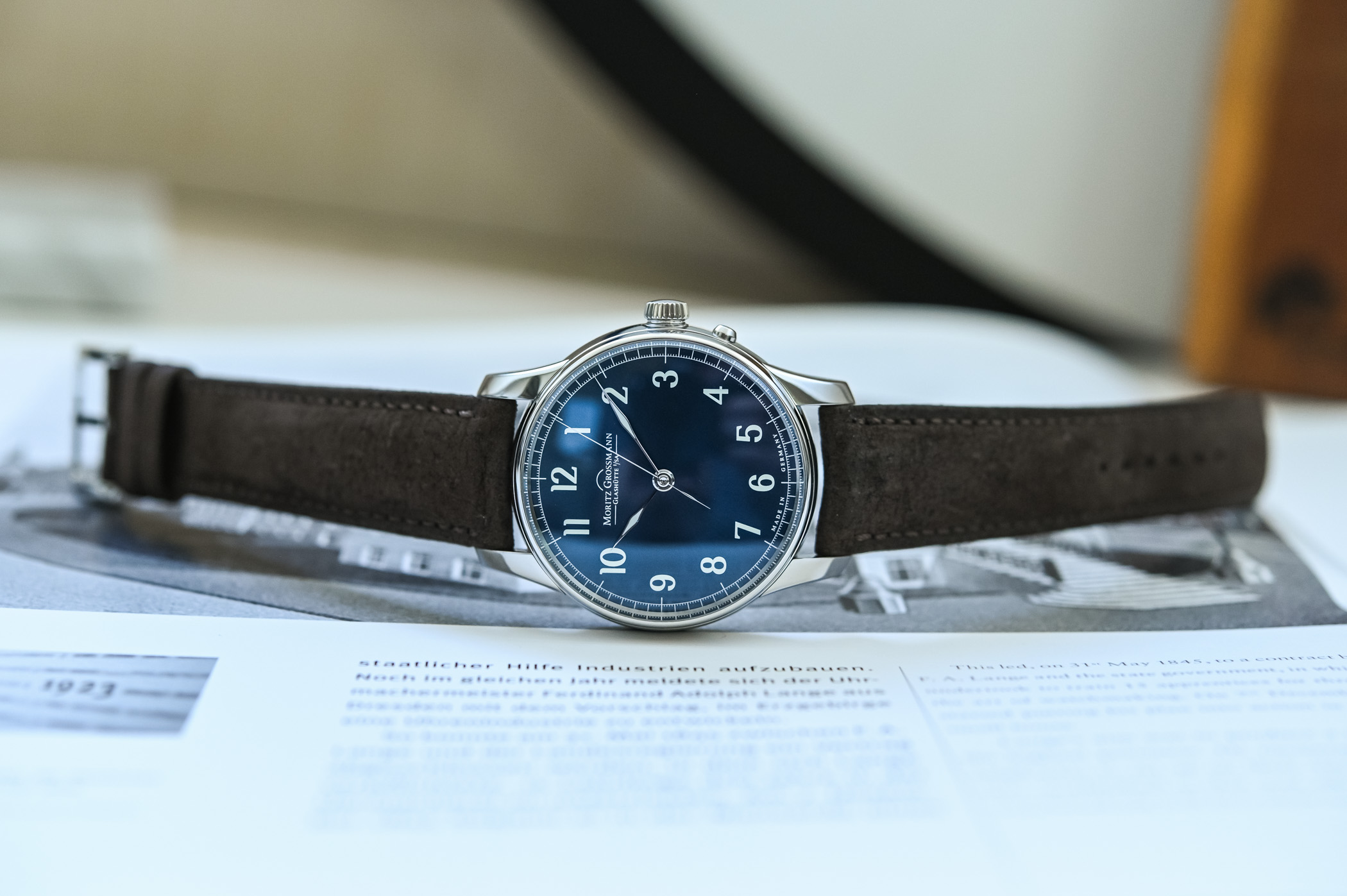 There is always a sensation of understatement and refinement about Moritz Grossmann watches, an elite Glashütte watchmaker that whispers instead of shouting. One of the youngest players on the Glashütte block – the brand name was acquired in 2008 – Moritz Grossmann has formed its own identity and interprets the proud Glashütte watchmaking heritage without leaning on heavyweights like A. Lange & Söhne. With fifteen in-house calibres under its belt and a commitment to Schöntes Deutsches Handwerk (the most beautiful German craftsmanship), the Central Second model we are covering today belong to the brand’s well-known Benu Heritage collection. 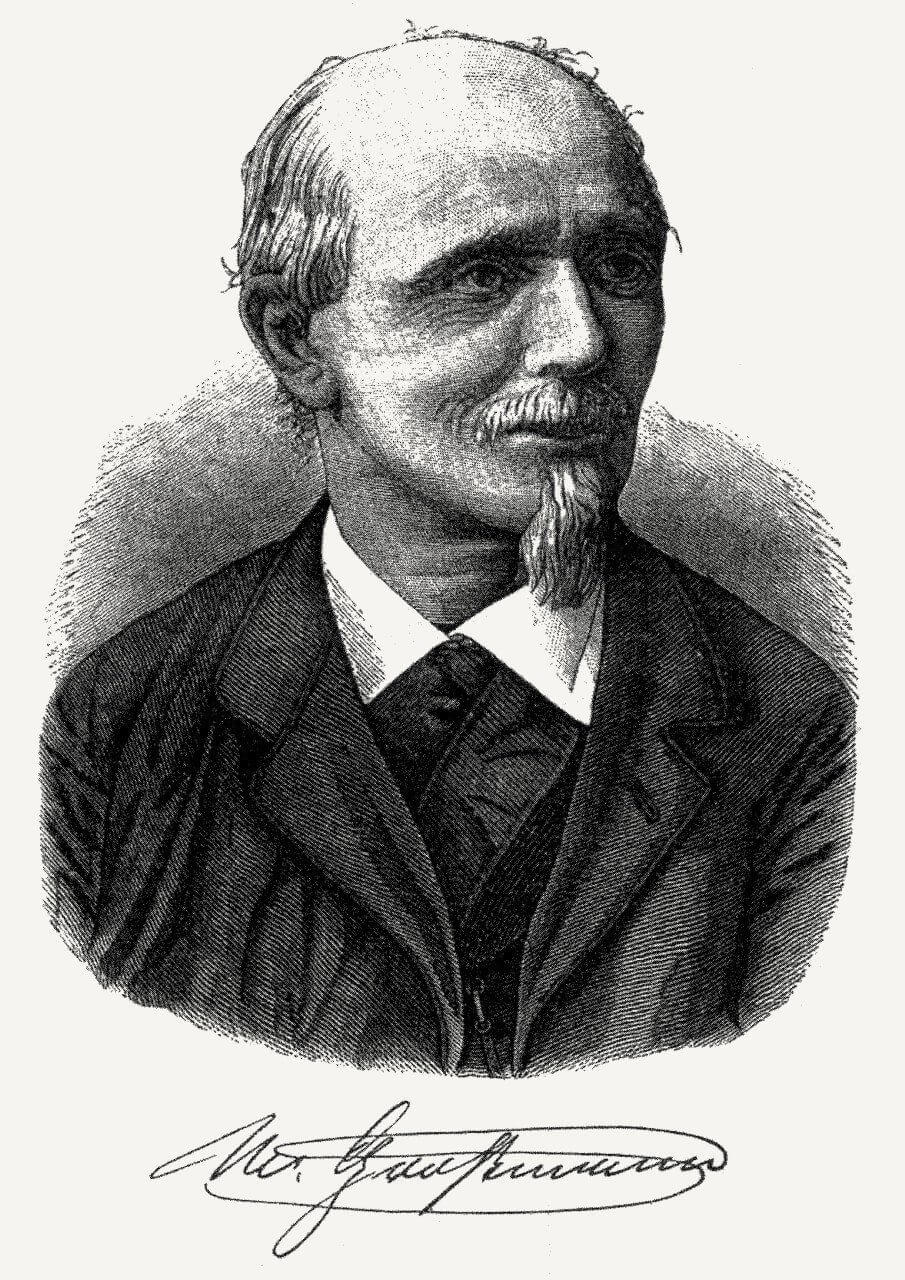 Invited by Ferdinand Adolph Lange to set up a technical workshop in Glashütte, Moritz Grossmann started crafting high-precision measuring instruments and tools before turning his hand to pocket watches, astronomical pendulum clocks, marine chronometers and even got around to patenting his small seconds counter. As one of the founding fathers of Glashütte’s proud watchmaking tradition, Grossmann wanted to encourage potential watchmakers, and in 1878, he co-founded the German School of Watchmaking in Glashütte. In his treatise on watchmaking, the exceptional watchmaker described how to construct a simple but mechanically perfect watch. Following his death in 1885, the name Moritz Grossmann faded into oblivion. In 2008, the “Moritz Grossmann” marque was acquired by Christine Hutter, who staged its renaissance with an emphasis on “Schöntes Deutsches Handwerk” or “the most beautiful German craftsmanship”. Typical features of a Moritz Grossmann watch are borrowed from the founder’s pocket chronometers, including large movements and the characteristic untreated German silver two-third plate with Glashütte ribbing. With its reverence for handcrafted components and habillage, even the annealed steel hands are made in-house and stand out with their exceptionally sharp tips and elegant profiles.

Compared to other members of the Benu Heritage family, the Central Second watch strays from the core classical territory with its more modern, versatile, everyday looks. Naturally, signature features like the exquisite hands and the refined finishings are respected, but the look of the Central Second, with its railroad minutes/seconds track, central seconds hand and vast empty expanse of dial, is more technical and instrumental. Given its absolute simplicity and legibility, some have compared the instrument appeal of this model to a deck or pilot’s watch. 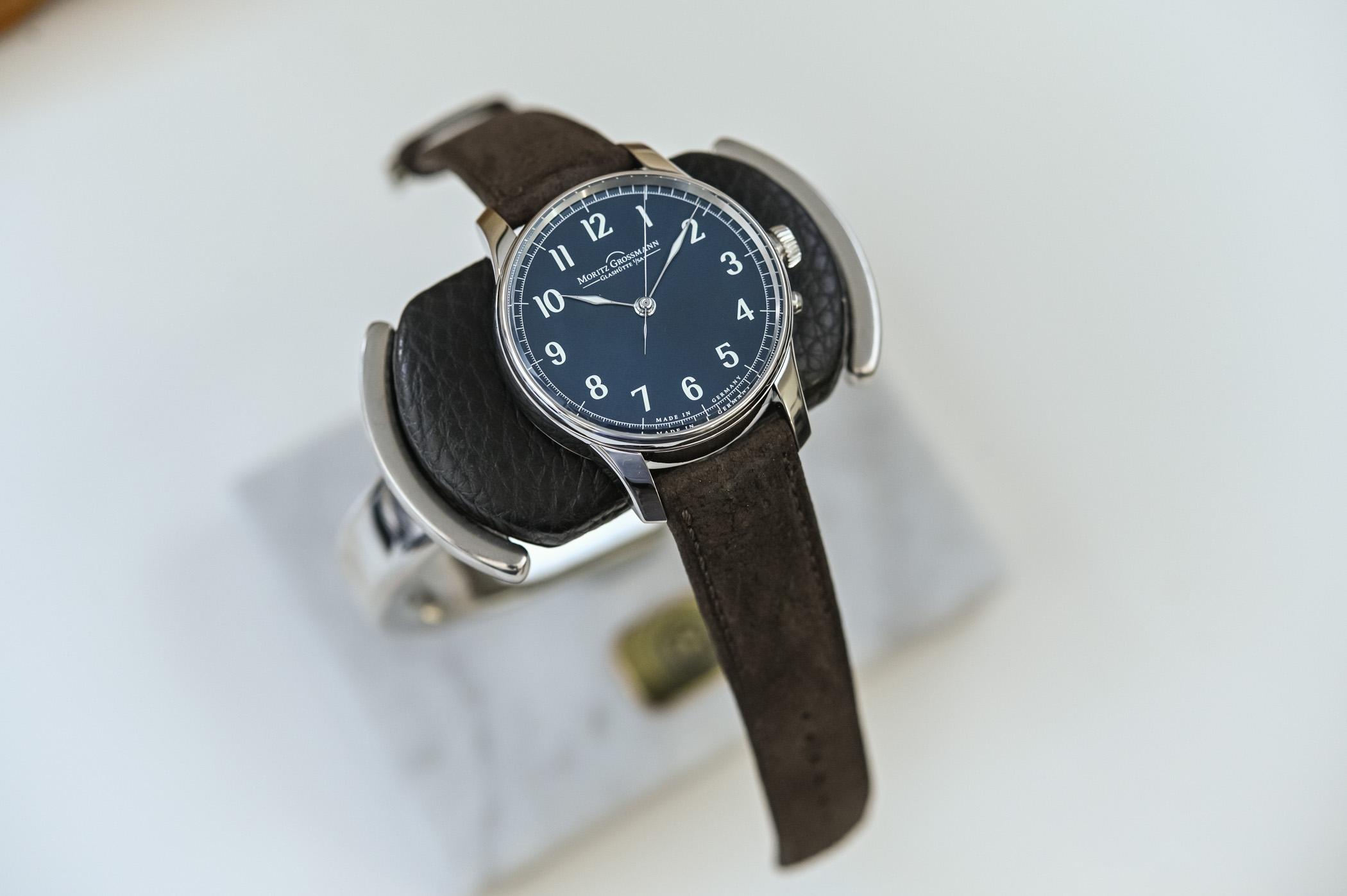 For starters, the case is large and measures 41mm across with a height of 12mm, which is quite pronounced given the manual-winding movement powering the watch. Both the salmon and blue dial versions come in stainless steel cases that are elegantly polished throughout with downturned lugs and a narrow bezel. The only feature that might have caught your attention is the small pusher located just beneath the crown. We’ll get to that in a second. 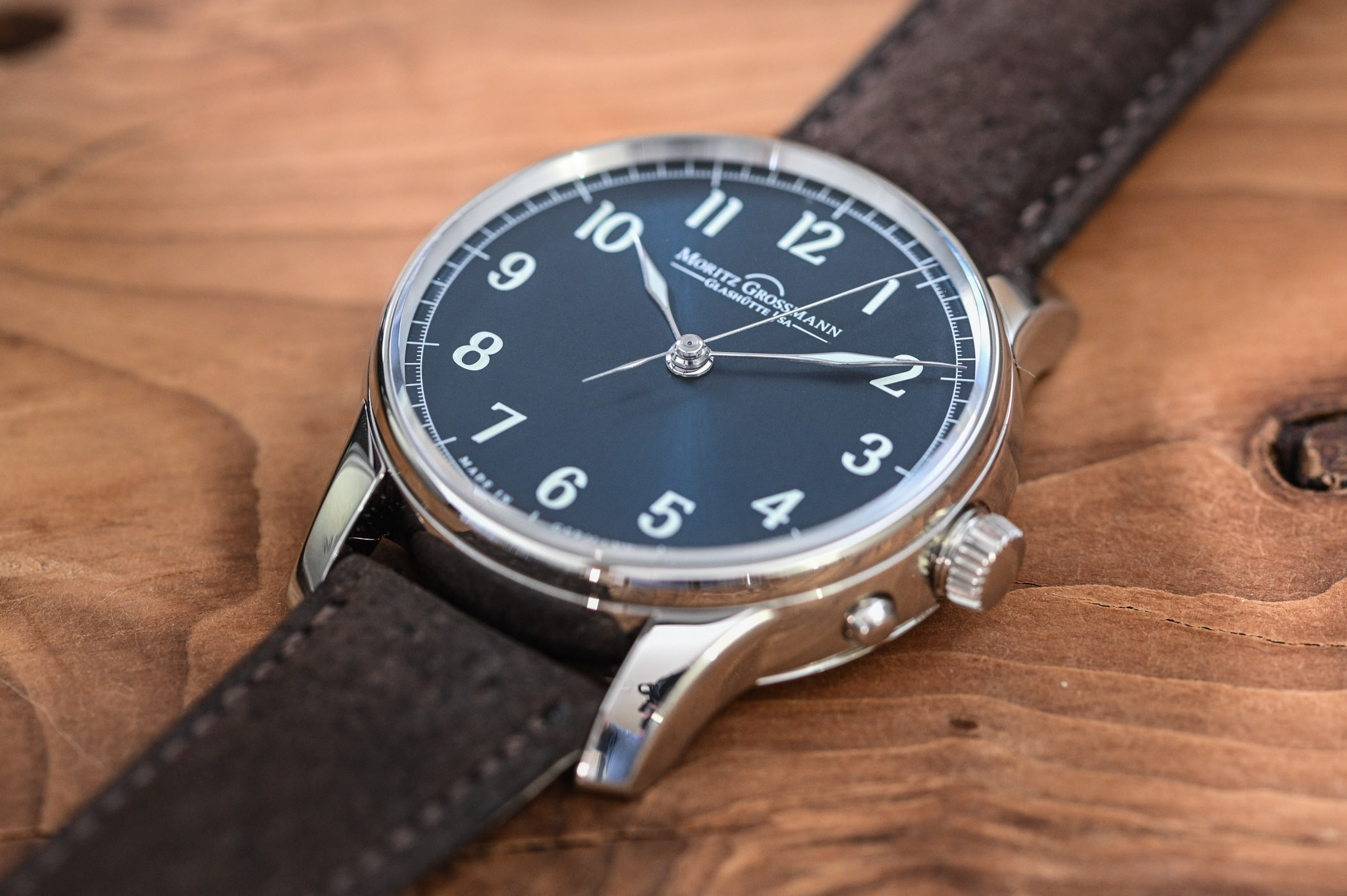 The dial is simple and refined with a clear emphasis on the hours, minutes and, marking a first for the brand, the central seconds. Normally, at Moritz Grossmann, the seconds are displayed in a fairly large sub-counter at 6 o’clock, like the one on this GMT model or Hamatic Vintage, with no numerals. In fact, the slightly sportier, more technical aesthetics of the Central Second are very similar to the Power Reserve released a year ago to coincide with the brand’s 12th anniversary, without the power reserve indicator and with the small seconds sub-dial removed and replaced by a central seconds hand. 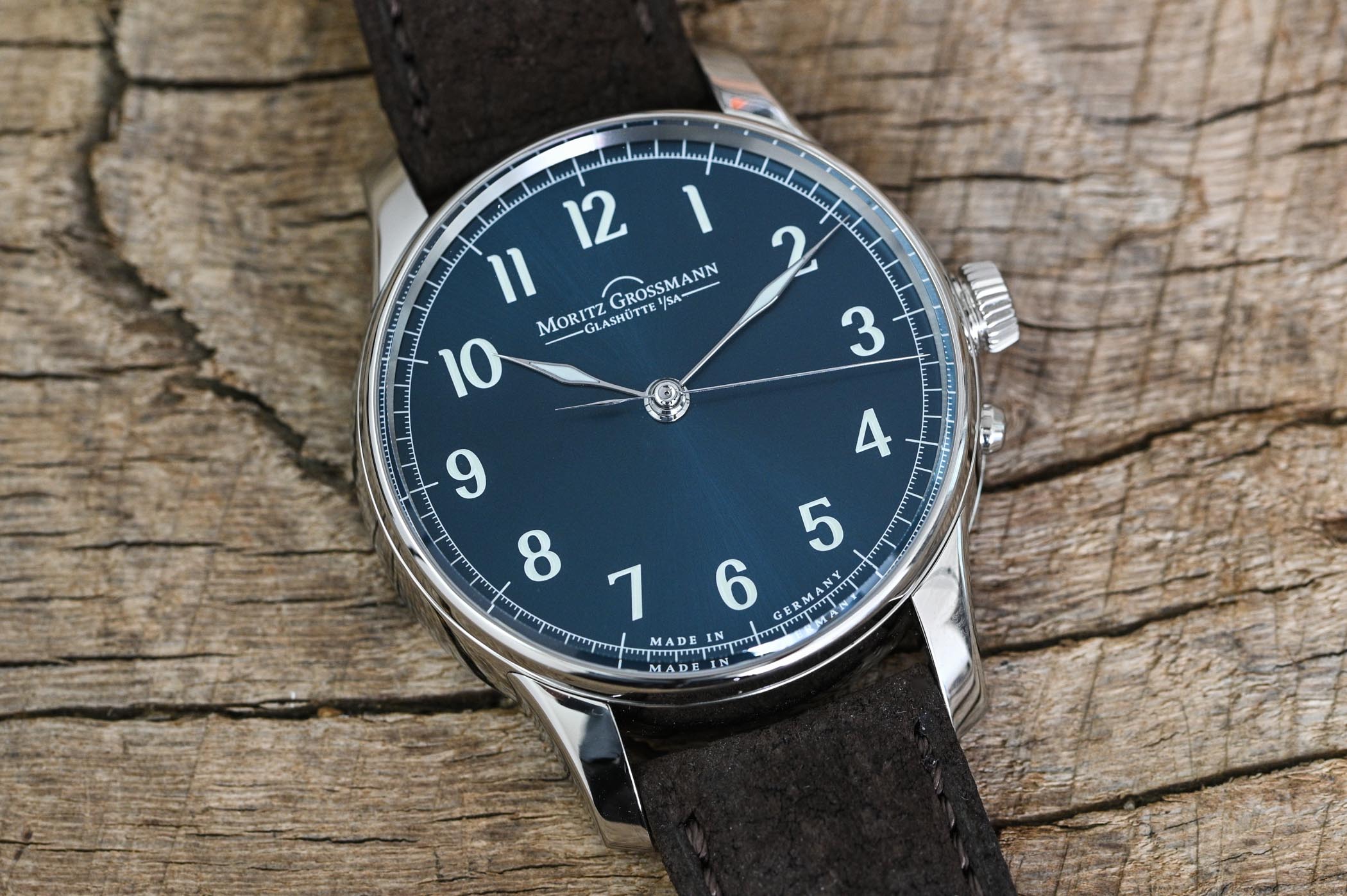 The more contemporary blue model displays a beautiful silky sunray finish. Radiating from the centre in fine strokes, the sunray decoration allows the blue dial to glow in different shades, depending on the light. In yet another departure from the brand’s signature codes, the printed white Arabic numerals and the hour and minute hands are treated with white luminescent material. Known as HyCeram Luminex, this hybrid ceramic material is composed of powerful luminescent pigments that emit an intense bright green colour in the dark. It’s worth remembering that Moritz Grossmann crafts its hands in-house, by hand. To highlight the brand’s virtuosity in this particular department, a few months ago, it released two well-known models – the Hamatic Vintage and Benu Tourbillon – with new solid rose gold hands. 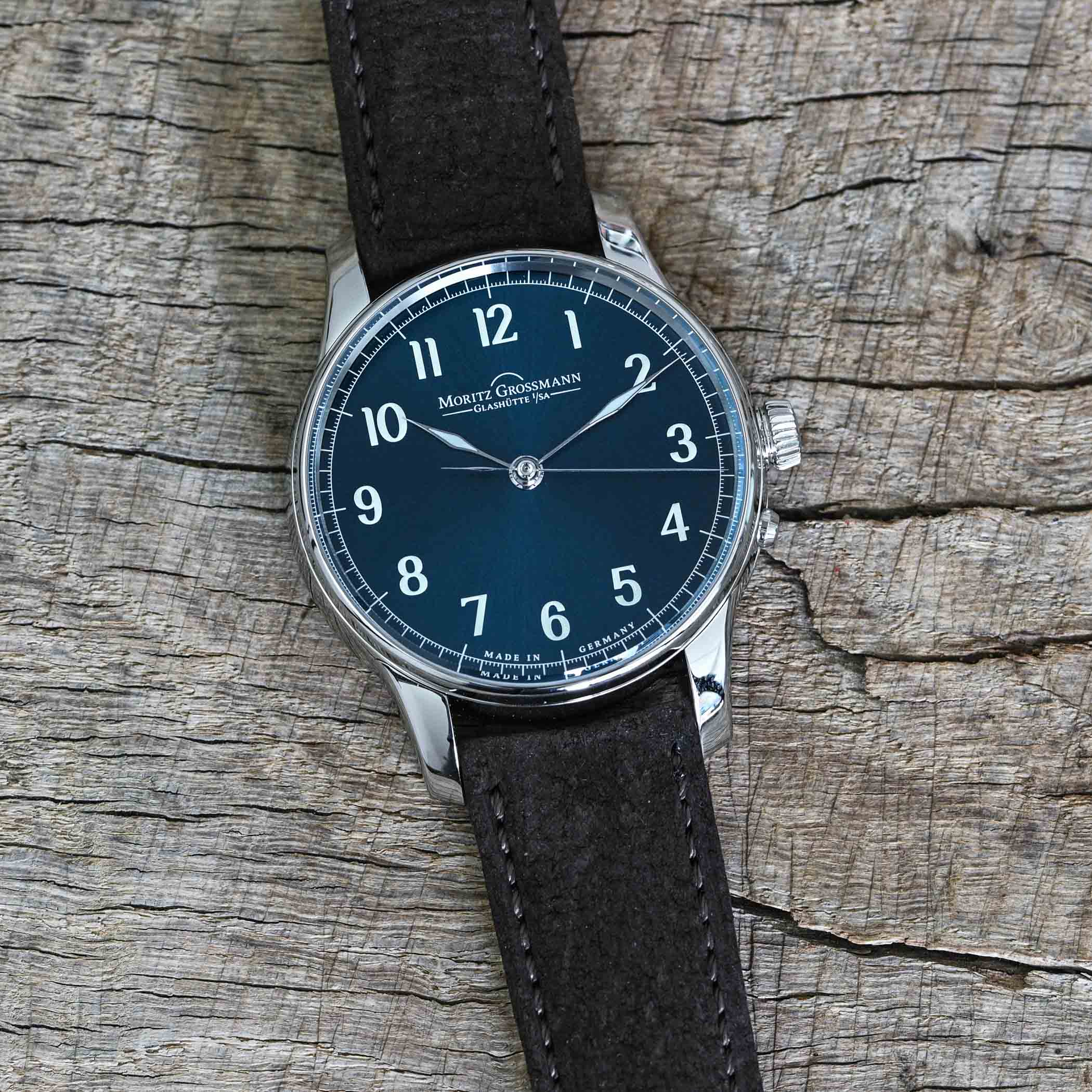 Here, the elegant lance-shaped hands with needle-sharp tips have been treated to luminescent material. The extremely thin and elongated central seconds hand that glides past the seconds/minutes track has a tapered leaf counterweight. To achieve the sharp profile of the hands, they are ground with diamond files, the edges of the hands are chamfered, and the bevels are manually polished to a mirror-like gloss with a wooden disc. It’s these kinds of details that make MG’s watches so special. 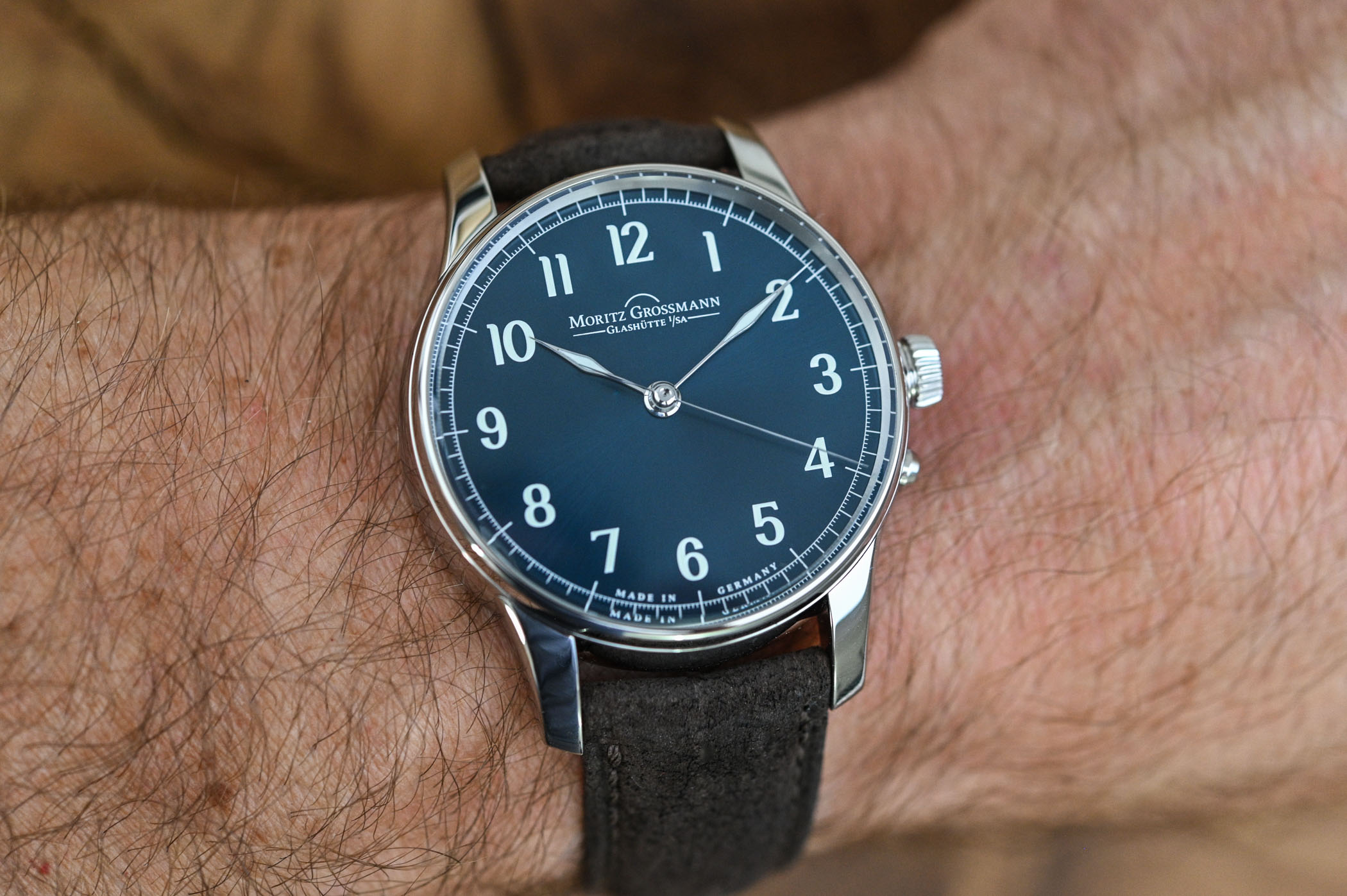 Apart from the inscriptions ‘Moritz Grossmann Glashütte 1/SA’ at noon and the ‘Made in Germany’ at 6 o’clock, the dial is empty. What might come across as Spartan for some could be interpreted as the essence of sobriety and understatement for others.

The small pusher on the caseband forms part of the crown-and-pusher mechanism and reflects Moritz Grossmann’s singular and pragmatic approach to watchmaking. Most manual-winding watches are wound at the crown, and time is adjusted by pulling the crown to the second position. Like conventional manual-winding watches, the crown on the Central Second is used to wind the watch. 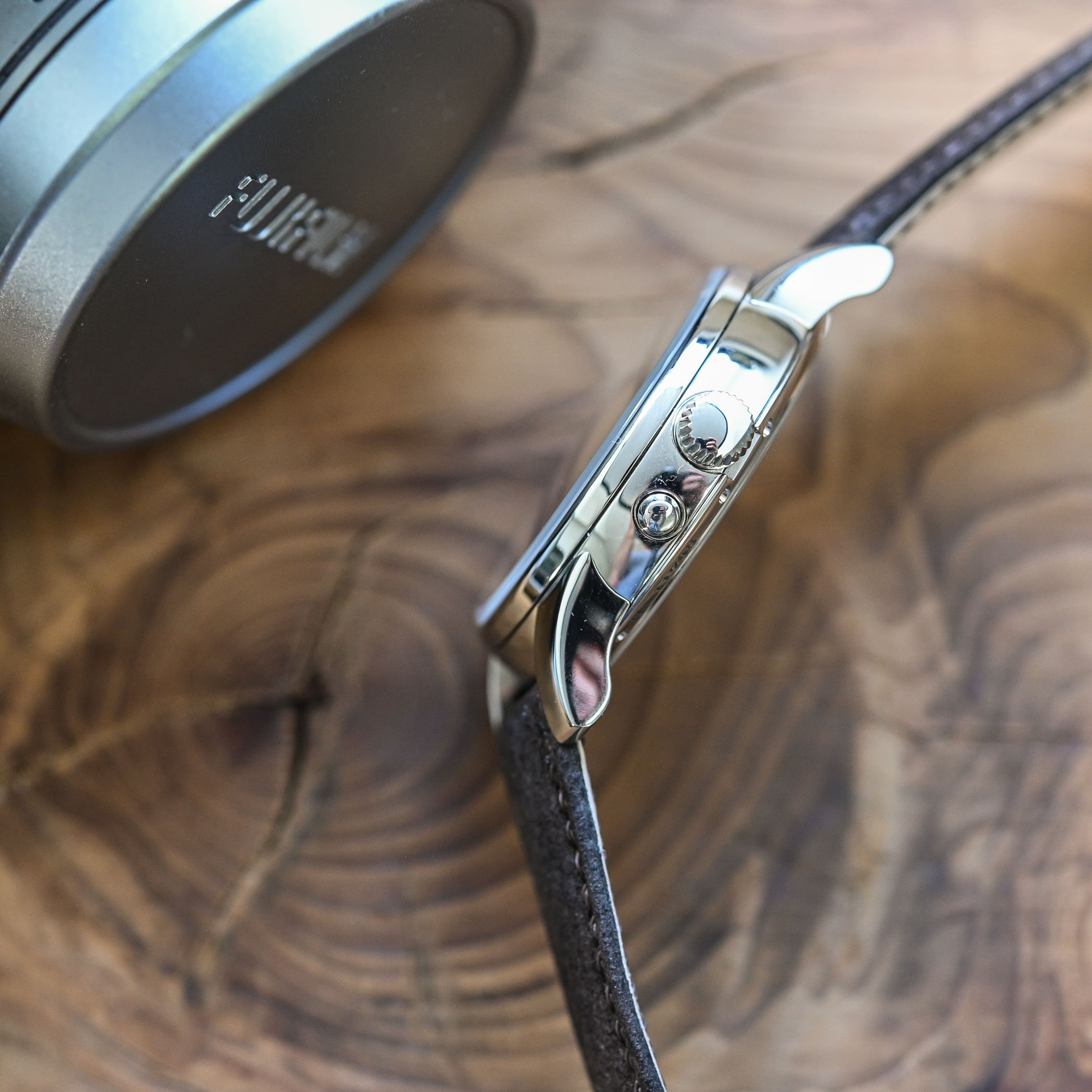 However, if you want to set the time, you have to pull the crown out, but – here is the unique feature – you will notice that the crown springs back to its original position. This spring device activates the stop-seconds mechanism to allow for precision time setting. Once you’ve set the time to the exact hour, minute and second, you press the conical pusher on the caseband. The pusher reactivates the movement and resets the crown to winding mode. In short, the default position of the crown is used to wind and set the time. The reasons behind this ingenious and extremely easy-to-use safety mechanism are to avoid dust entering the case via the crown, to minimise wear and tear on the keyless works and to prevent altering the hands unintentionally when pushing the crown back into place.

With its Spartan yet refined dial, the view of the movement quickens the pulse and deserves admiration. Certain hallmark features like the 2/3 plate made of untreated German silver adorned with wide Glashütte ribbing (an ode to Moritz Grossmann’s pocket watches of the 19th century), the hand-engraved balance and escape wheel cocks, the sunburst decoration on the ratchet wheel, the violet heat-annealed screws and the hand-engraved inscriptions on the 2/3 plate clearly establish its provenance. 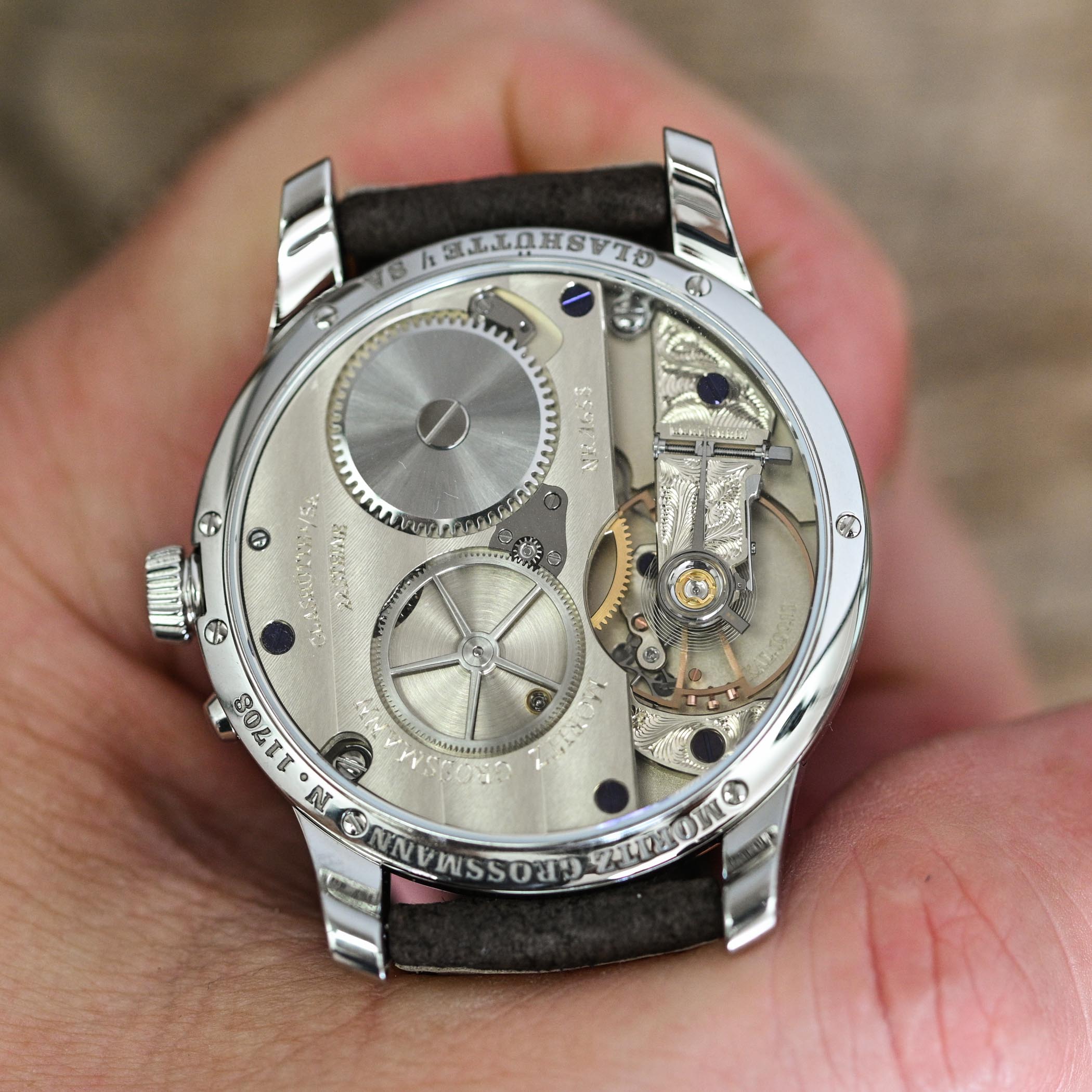 The new calibre 100.11 is derived from Grossmann’s calibre 100.1. To keep the seconds hand rotating in the centre of the dial, the force of the mainspring is transferred from the third wheel to the new central seconds wheel via an additional intermediate wheel. All the components of the train bridge are aligned on one level to ensure a harmonious and homogenous look. Fitted with an in-house Grossmann balance with variable inertia and poising screws and a Nivarox balance spring, the 14.2mm balance has a slow frequency of 18,000 semi-oscillations per hour. Another distinctive feature is the use of white sapphire jewels instead of standard rubies. Fully wound, calibre 100.11 delivers a somewhat meagre 42 hours of power. 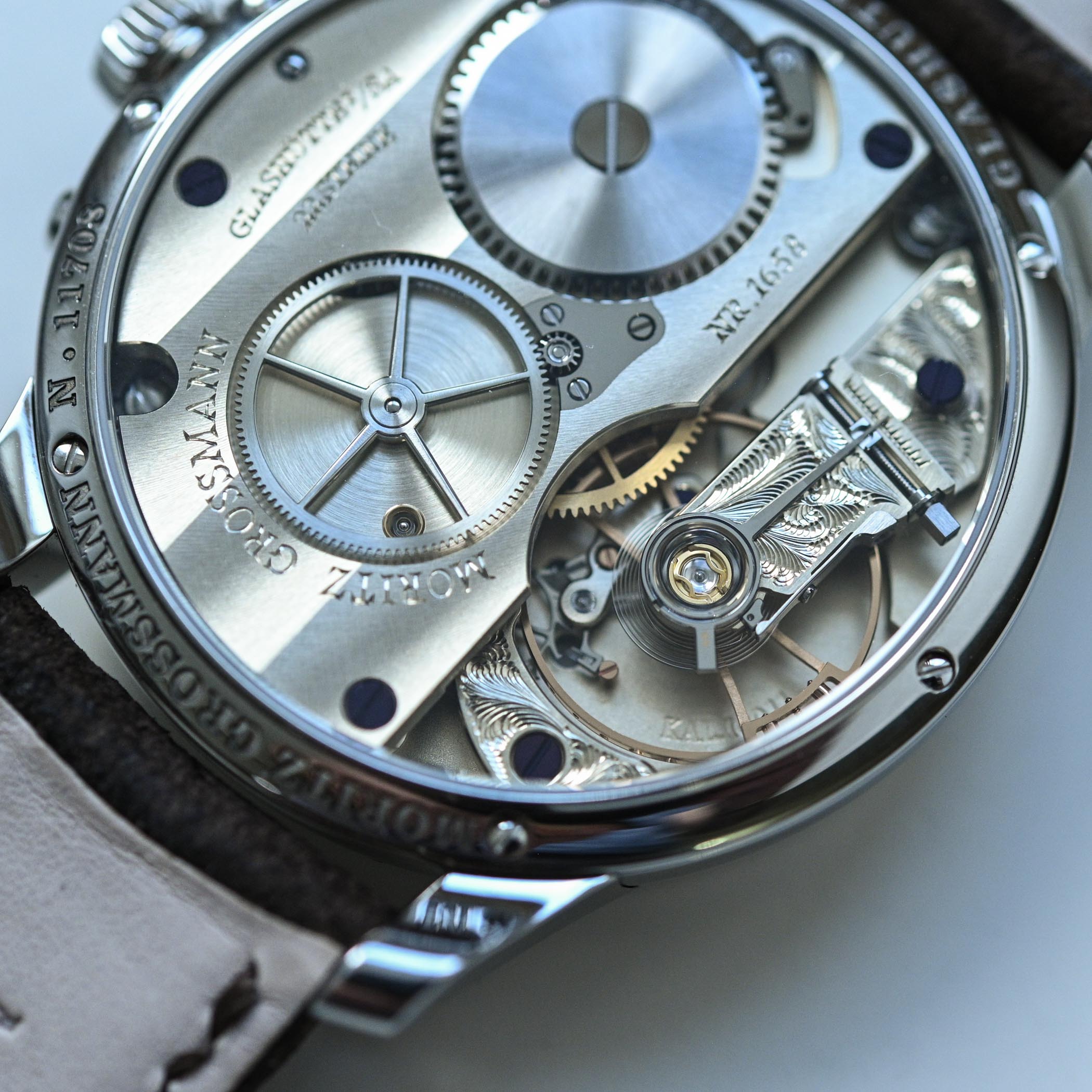 The German philosophy of pragmatism and understatement is in full force here. The deceptively simple face of the Central Second hides an ingenious crown-and-pusher mechanism that allows precision time setting and protects and prolongs the life of the movement. The finishings are superlative, yet there is nothing ostentatious about the case or face of the Central Second; in fact, a lot of the seductive touches are found on the movement. Could this be Moritz Grossmann’s interpretation of a daily beater? A simple, casual three-hander with an attractive dial and a beautiful movement for the exclusive delight of its owner? 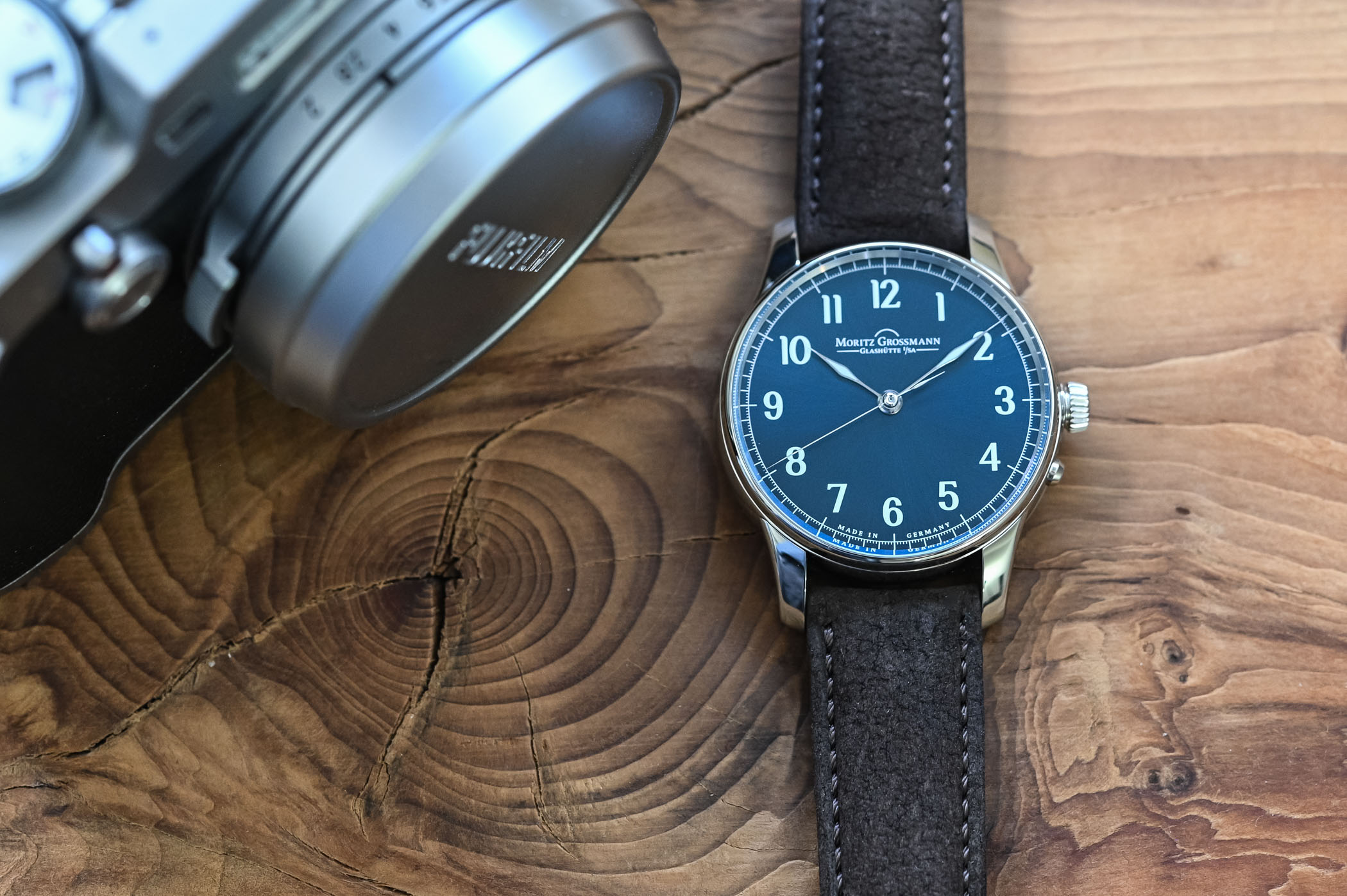 The watch is worn on a brown Kudu leather strap (that’s African antelope leather, in case you were wondering) with a steel pin buckle. The Moritz Grossmann Central Second with blue dial is a non-limited edition, while the salmon dial version comes in a run of just 25 pieces. The price is set at EUR 25,600 for both models.