When it comes to taking inspiration from everyday surroundings and turning it into something intriguing, there’s no beating Seiko or Grand Seiko. Even in entry-level collections, Seiko invests a lot of effort to create unique and visually enticing dials. So, when we recently covered a pair of watches with dial patterns resembling the cobblestone streets of Tokyo’s Ginza district, we wanted to take a closer look, just to see how good these dials were. So, we decided to go hands-on with the Seiko Presage SSA445 140th Anniversary Limited Edition. 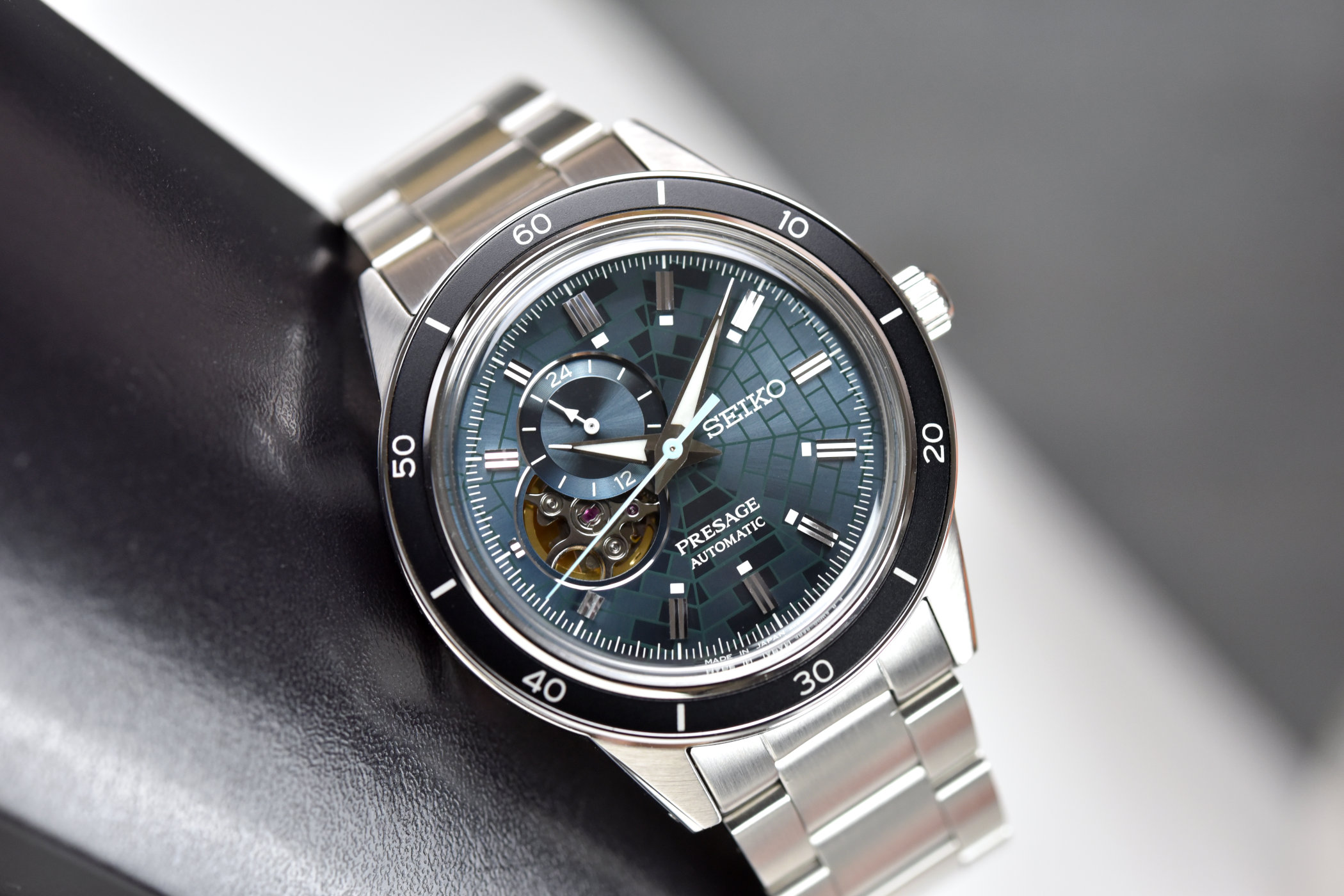 The Ginza district, situated in central Tokyo, is where Seiko’s history starts. It is here where Kintaro Hattori founded his company in 1881, now 140 years ago. At first, his business involved servicing, repairing, and selling clocks and watches before setting out to create watches of his own under the now world-renowned Seiko name.

Even to this day, Seiko operates from the Ginza district, although production, assembly, service and distribution are spread across multiple locations in Japan. Considering the fact that a 120-year-old clock still indicates the time in Ginza, that the largest Seiko flagship store is located in Ginza, as well as the Seiko Museum and other establishments, you can understand the importance of this district in Seiko’s heritage. 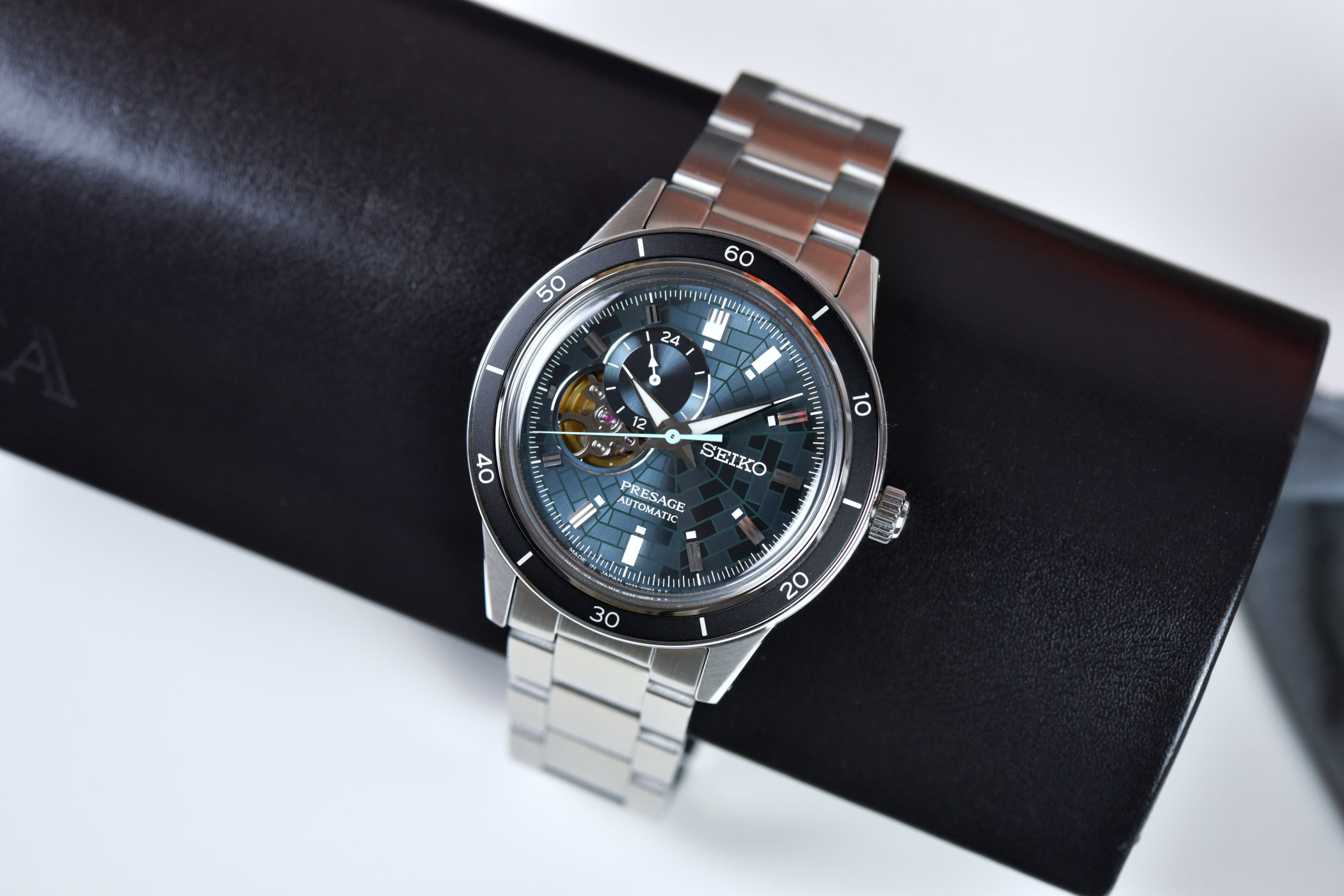 This year marks the 140th anniversary of Seiko, and the company has been busy reminding us of the fact with a whole range of watches, from entry-level to Haute Horlogerie. It is an unprecedented amount of celebratory watches, each with ties to various locations that are important to Seiko. We’ve seen the stupendous Grand Seiko Heritage 140th Anniversary Limited Edition SLGH007, for instance, or a trio of green Seiko Prospex Divers 140th Anniversary Limited Editions. Today it’s the Presage collection’s turn to take centre stage, and even though it’s worlds apart from the platinum-cased SLGH007, it remains quite an interesting piece! 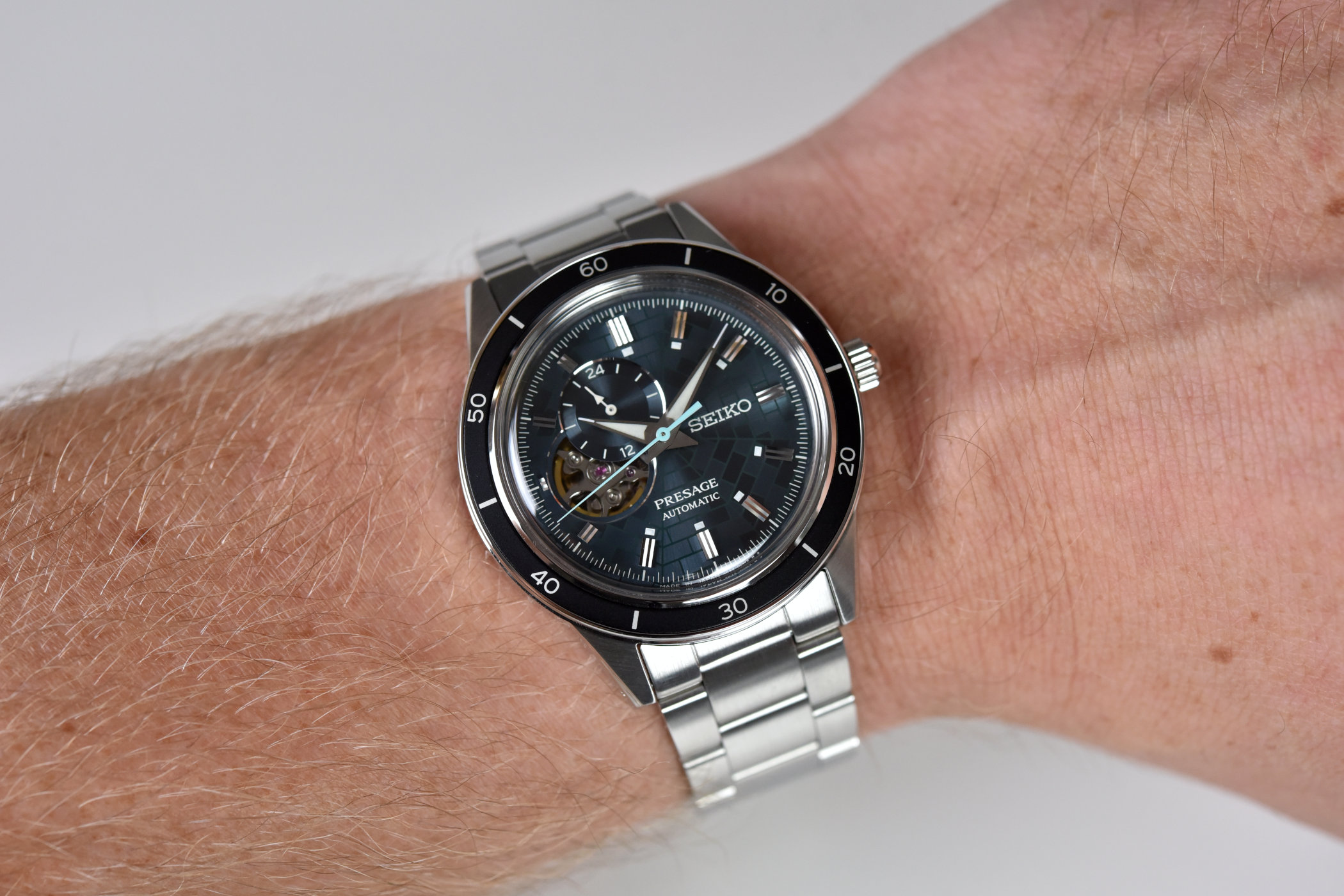 From the outside in, the Seiko Presage SSA445 has the same case as the other Seiko Presage Style60’s we’ve seen. This affordable series of watches is modelled after the Seiko Crown Chronograph from 1964, an important watch in Seiko’s history (but by no means a 1:1 recreation). The 40.8mm wide steel case measures 12.8mm in height and is topped with a domed Hardlex crystal. And just as before, we have a fixed bezel with a white-on-black 60-minute scale. 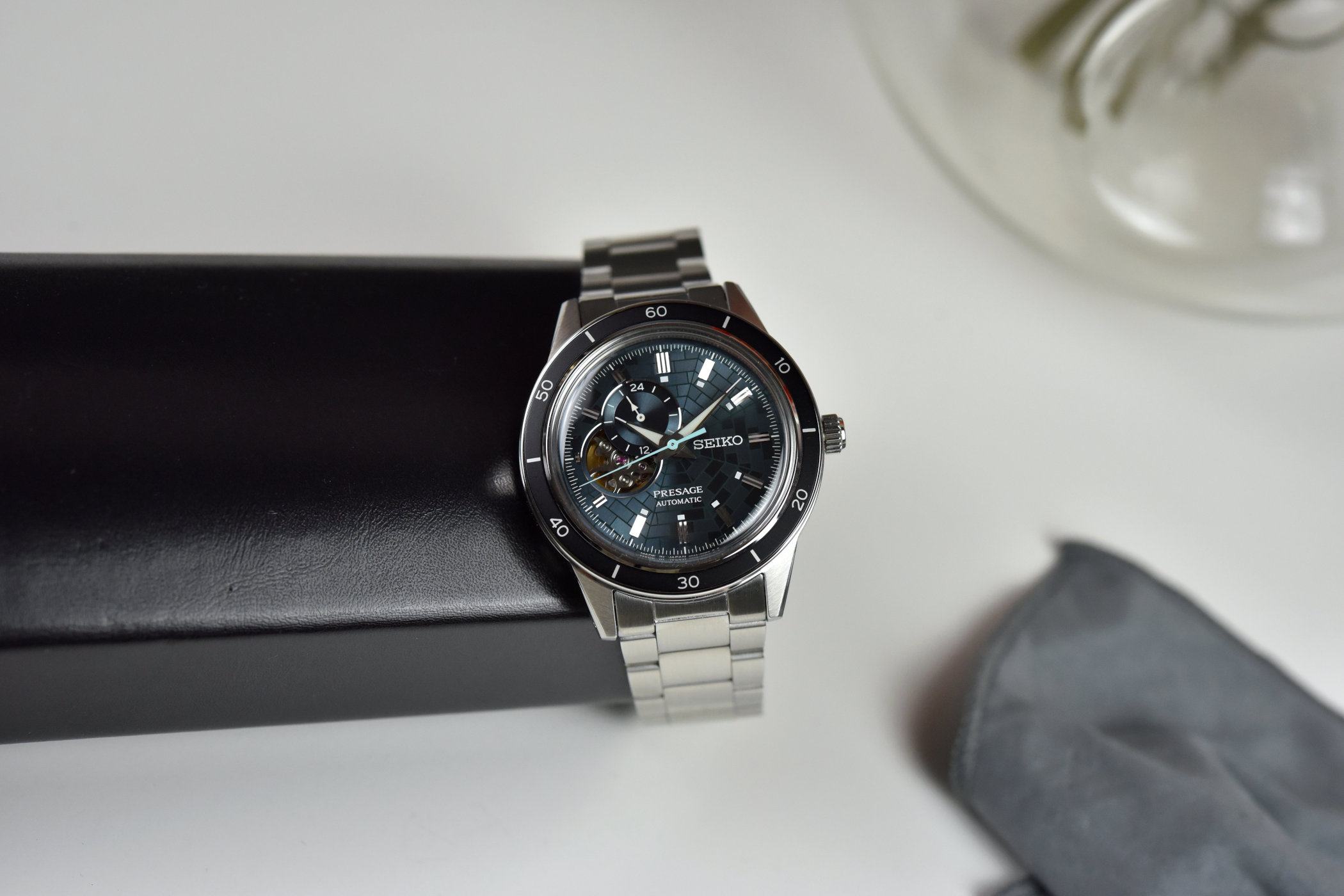 The dial of the Seiko Presage SSA445, similar to the Seiko Prospex 1959 Alpinist Modern Re-Interpretation SPB259, is rather attractive. Despite the fact that it costs less than EUR 1,000, the dial is a superb display of Seiko’s ability to create unique and appealing textures and patterns. In this case, the inspiration comes from the cobblestone streets of the Ginza district picked out in a grey-blue tone. If we use our imagination a little, we can see ourselves walking across the historic streets of Tokyo, admiring the surroundings where history is, quite literally, at your feet. 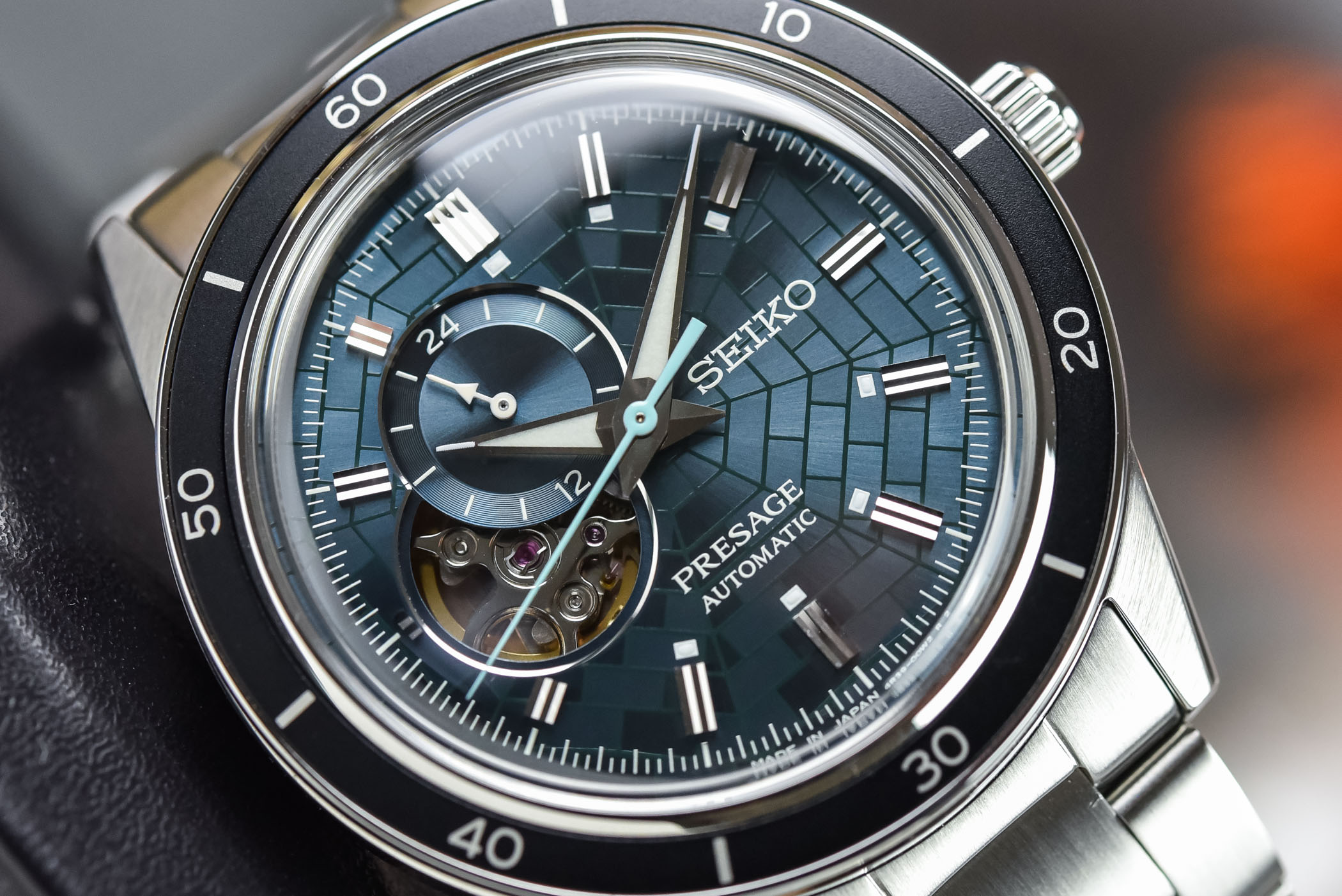 The dial has eight sections spread evenly, emanating from the centre. Each section has a repetitive pattern of “stones” lined by a darker outline (the mortar, if you will). To enhance the dial further, it is entirely sun-brushed, giving it a lot of life as the colours change depending on the light. The final “Ginza-touch” is the Komparu blue seconds hand, a traditional Japanese colour named after Komparu street, once Ginza’s bustling centre of nightlife. 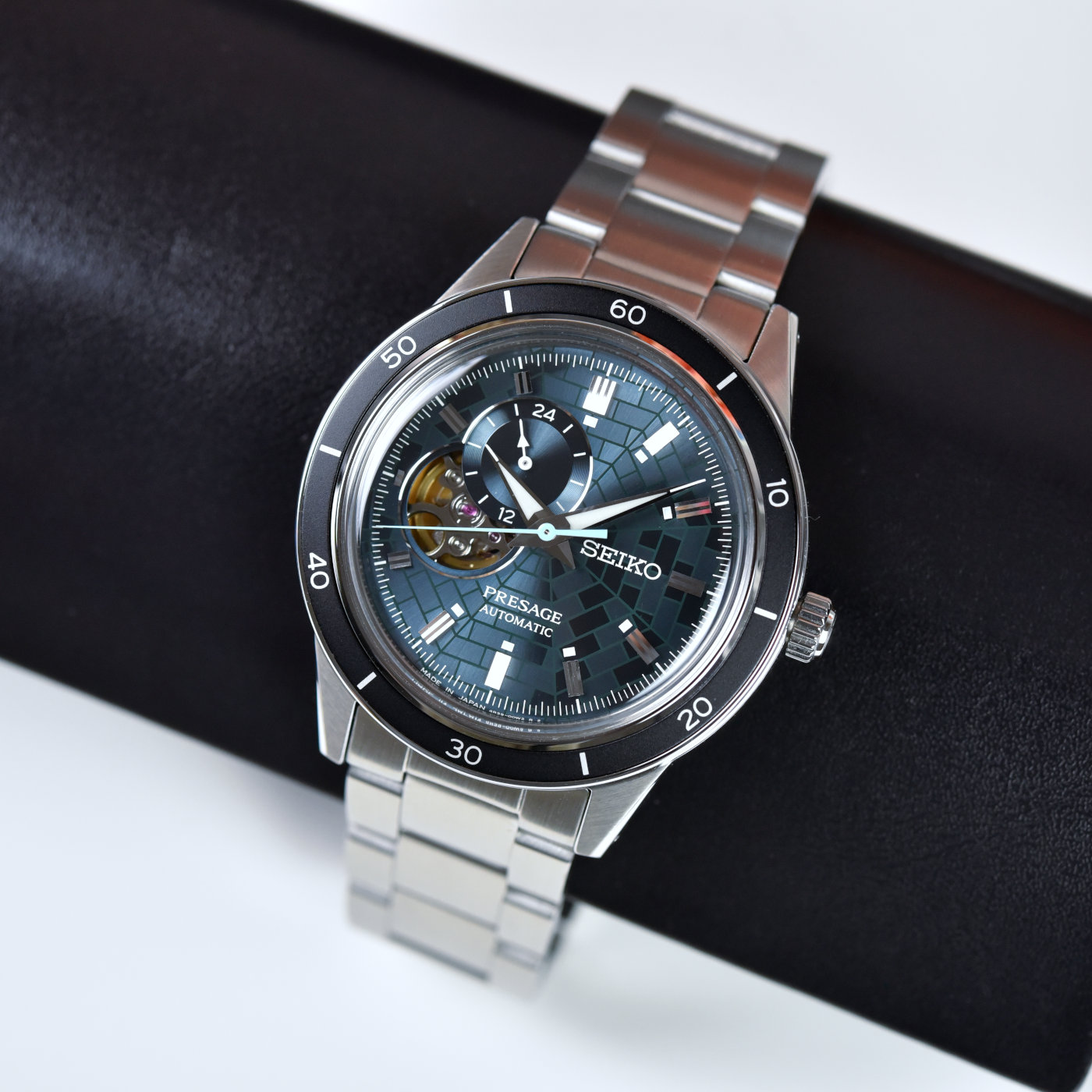 Just as its non-limited siblings, the Seiko Presage SSA445 has applied, faceted and polished indices paired with polished hands filled with luminous material. In typical Style60’s fashion, there’s a cut-out section at 9 o’clock to reveal the balance wheel of the automatic movement and an overlapping 24-hour subdial at 10 o’clock. While the open-heart dial revealing the balance wheel is not a MONOCHROME favourite, it does liven up the dial with its back-and-forth motion. 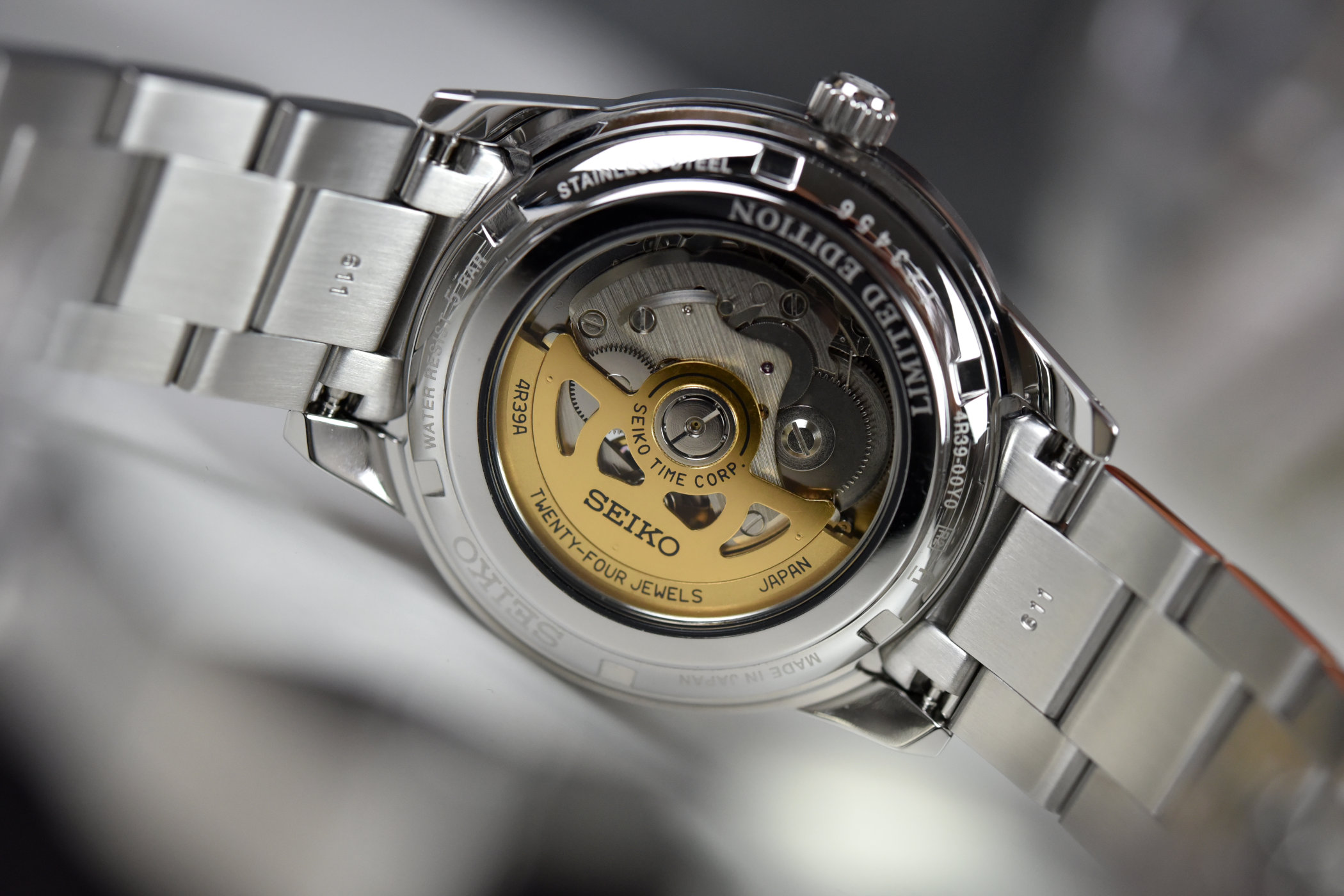 Powering the Seiko Presage SSA445 is the calibre 4R39, which can be seen through the back. While it is certainly not the most impressive movement on view, it shows Seiko’s capabilities as a manufacturer by providing a reliable, mechanical heart at a very affordable price. The movement has 26 jewels, runs at 21,600vph and offers 41 hours of power reserve when fully wound. 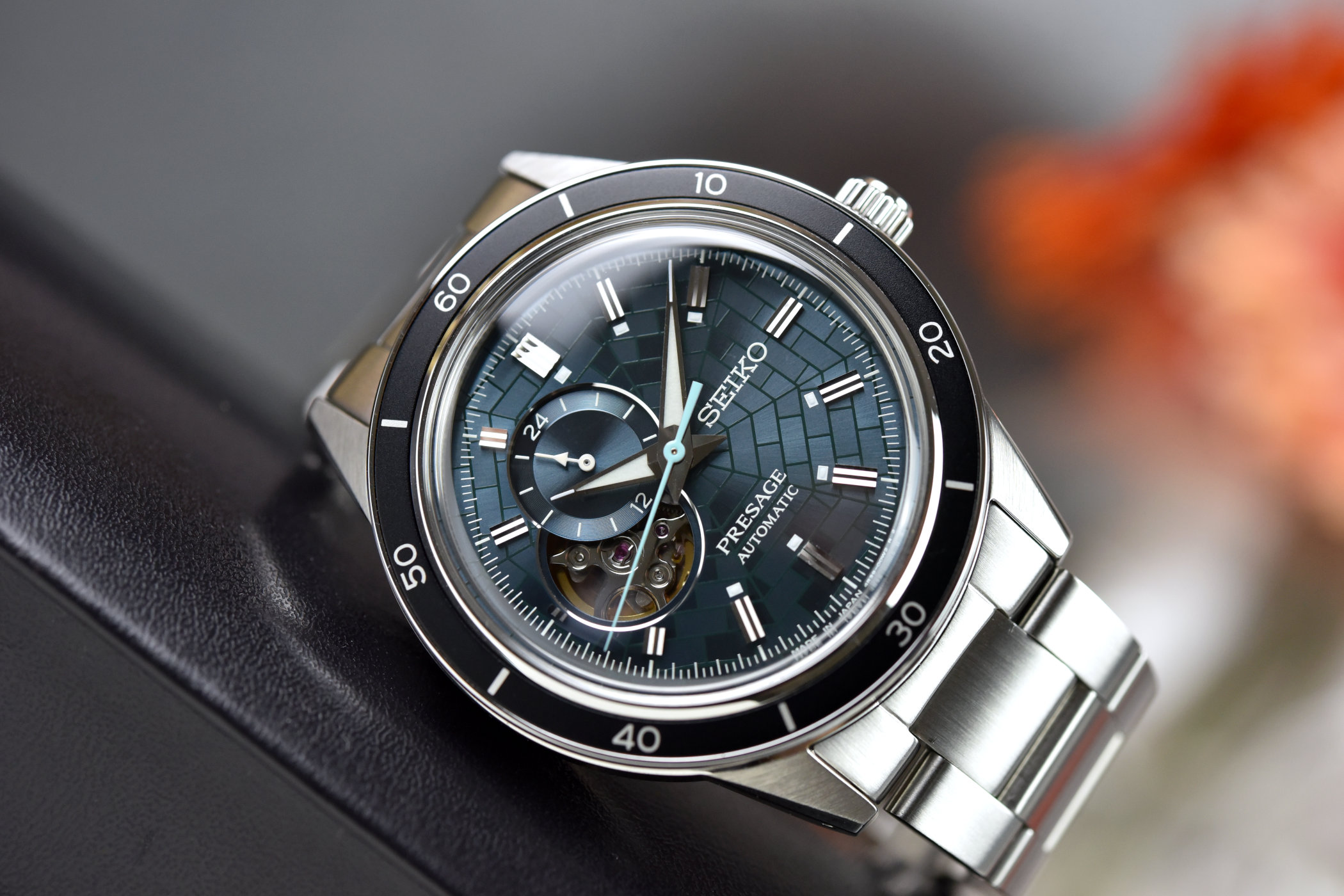 The Seiko Presage SSA445 comes on a three-link stainless steel bracelet, with brushed finishing throughout and a folding buckle. A nice, period-inspired touch is the drilled lugs to quickly (and more importantly, scratch-free!) switch it for something else. Because while it certainly fits the watch, we can just as easily envision this watch worn on a cognac leather strap. The watch is limited to 4,000 pieces and retails for a very affordable EUR 590. 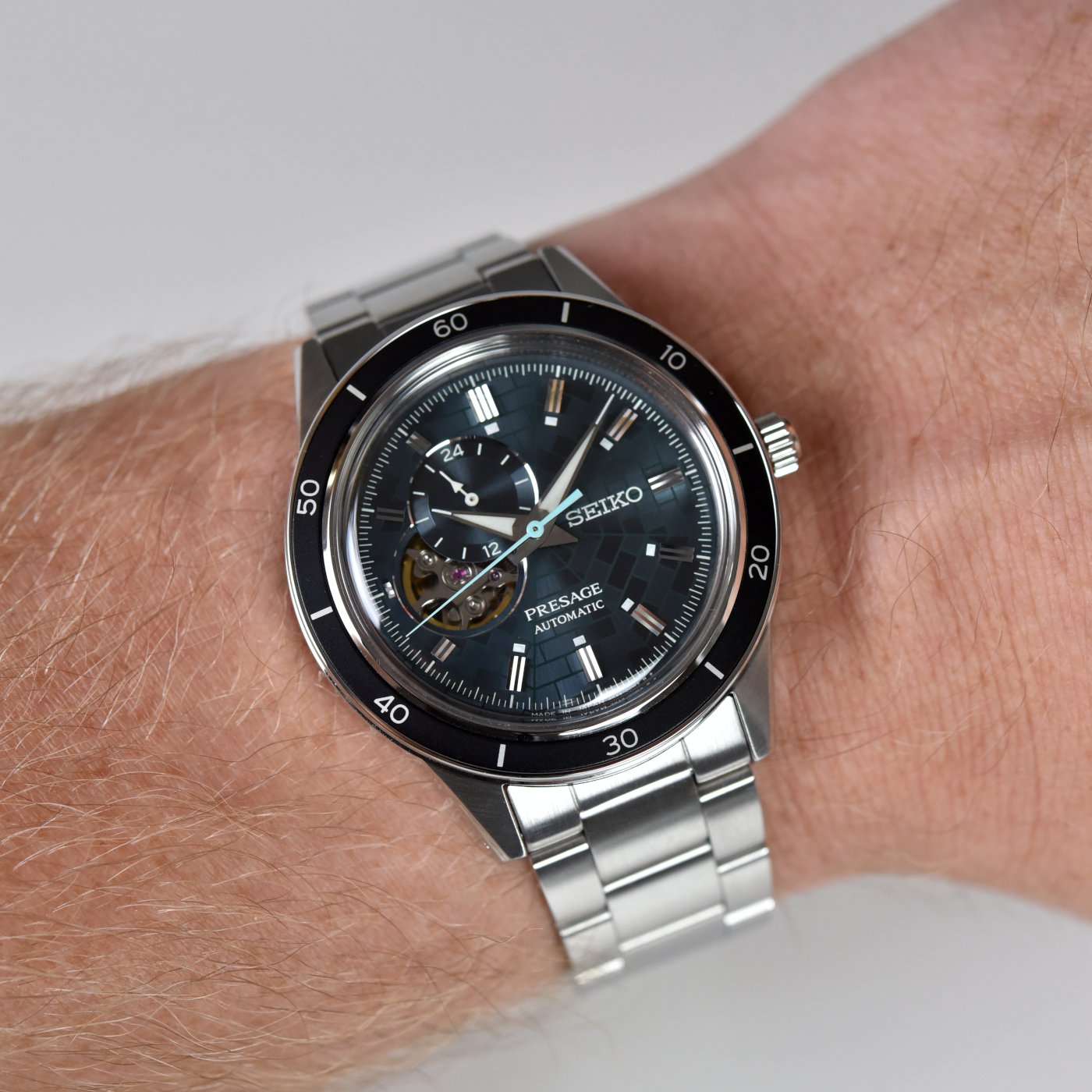 Earlier in this review, I mentioned that Seiko shows dedication to all levels of watchmaking, whether it is something like this humble Seiko Presage or the Grand Seiko Masterpiece Spring Drive SBGZ007. Of course, the two are incomparable when it comes to the amount of manual craftsmanship and mechanical complexity, but considering the affordability of this Presage SSA445 and the level of detail the dial provides, we’re impressed again. It’s fun, it looks good, it’s relevant within Seiko’s lineage, and it wears well on the wrist. What more do you want?