Titoni is a brand you’re probably not familiar with, but one that should certainly be on your radar. Founded by Fritz Schluep in Grenchen, Switzerland in 1919 under the name Felco, the 102-year-old company is now run by the third generation with Daniel Schluep as the CEO. Titoni has an established relationship with ETA and Sellita for much of its collection, but the brand introduced its first in-house movement in 2019, the Calibre T10. This marked the 100th anniversary of the company and the Titoni LINE 1919 was the first to carry the new automatic. Let’s take a closer look at this contemporary, minimalistic piece. 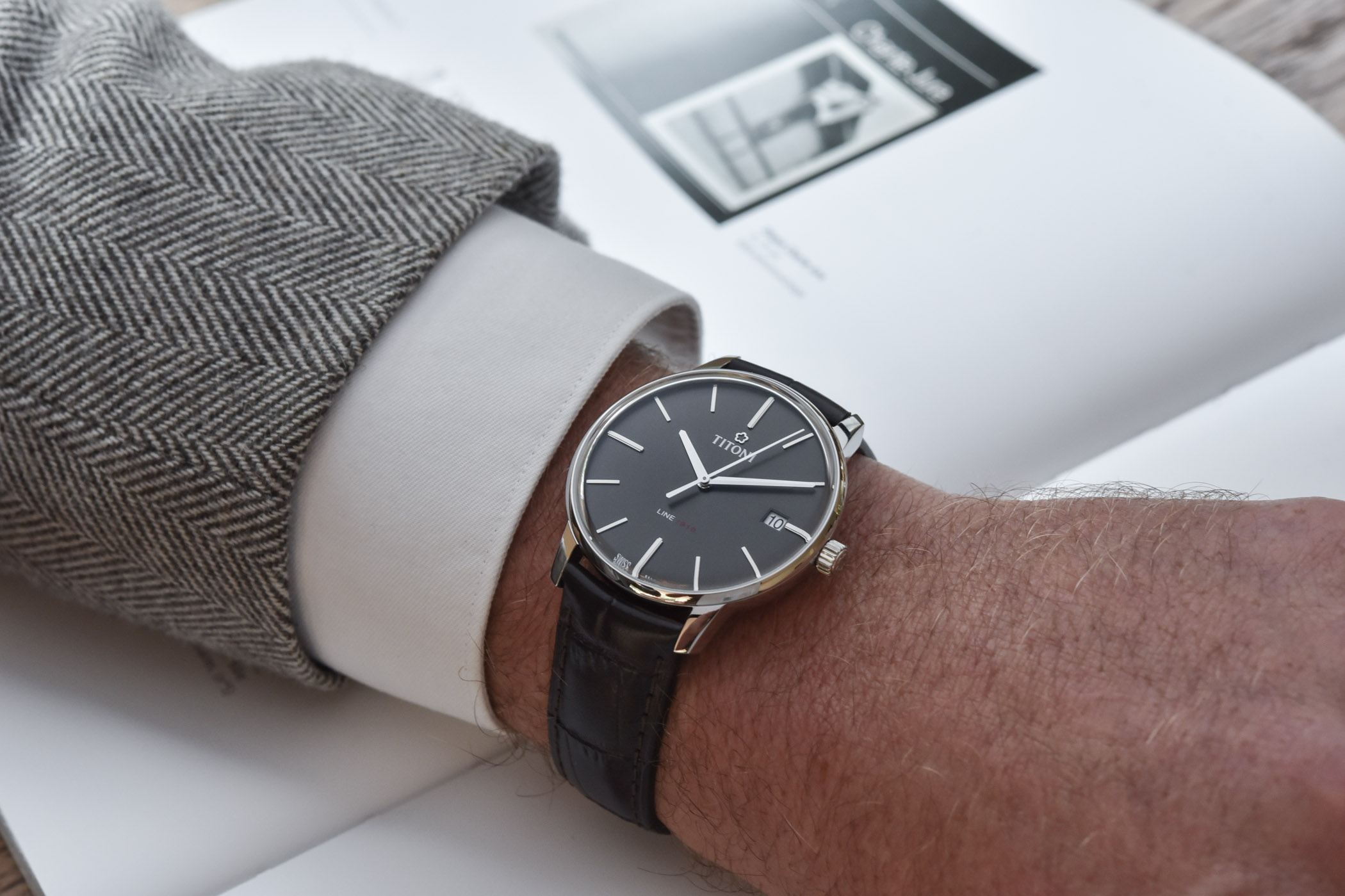 It’s always interesting when a watchmaker like Titoni, an independent, family-owned Swiss brand of over 100 years, can slip under the radar. It has a surprisingly robust production level, producing around 100,000 watches per year. It’s well known in China and the Far East with less familiarity in Europe and North America. Although brands like Hamilton were principal suppliers to the US military during World War II, Titoni supplied 30,000 watches to the US Army in 1945 (truly significant numbers). The brand was also the official supplier to the Nairn Transport Company’s drivers, who delivered mail between Damascus and Baghdad in the 1950s. 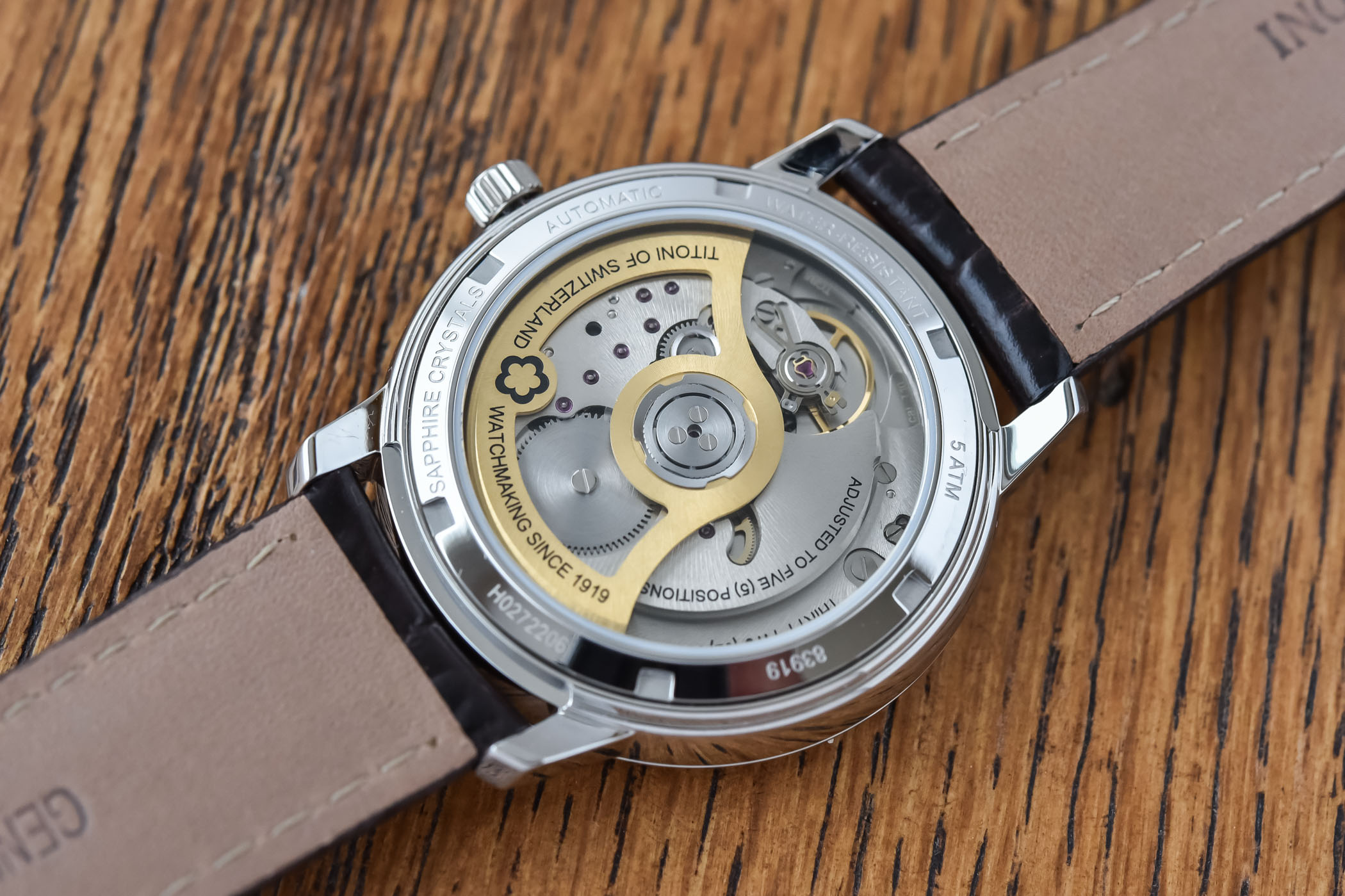 The biggest news of late is Titoni’s first in-house movement, which began the planning/design stage in 2013. The Calibre T10 has officially made the brand a Swiss manufacture, but prices remain accessible. In fact, the Seascoper dive watch with a 600m water resistance rating and T10 variant that’s COSC certified retails for less than CHF 2,000. That’s quite a value. Other models in Titoni’s portfolio continue to use Sellita and ETA movements like the Heritage 83019, but the T10 and proven in-house capabilities represent the future of the company.

The Titoni LINE 1919 definitely takes a minimalist approach and that starts with the 40mm stainless steel case. The round, polished bezel is all you see as it frames the dial, while the polished lugs are narrow and unobtrusive. It’s a classic, timeless design that’s both retro and modern. The name also pays homage to the date of Titoni’s founding, 1919. The sides of the case are equally simple with a smooth flow from lug tip to lug tip. A box-shaped sapphire crystal with anti-reflective coatings on both sides protects the dial, while the sapphire exhibition case back provides a clear view of the in-house automatic. The signed crown is well sized and like the rest of the case, doesn’t call attention to itself. This case’s job is to elegantly blend away and let the dial be front and centre. There are two strap options, either a stainless steel bracelet with a butterfly clasp or a brown leather strap with a folding clasp. Water-resistance is rated at 50 metres. 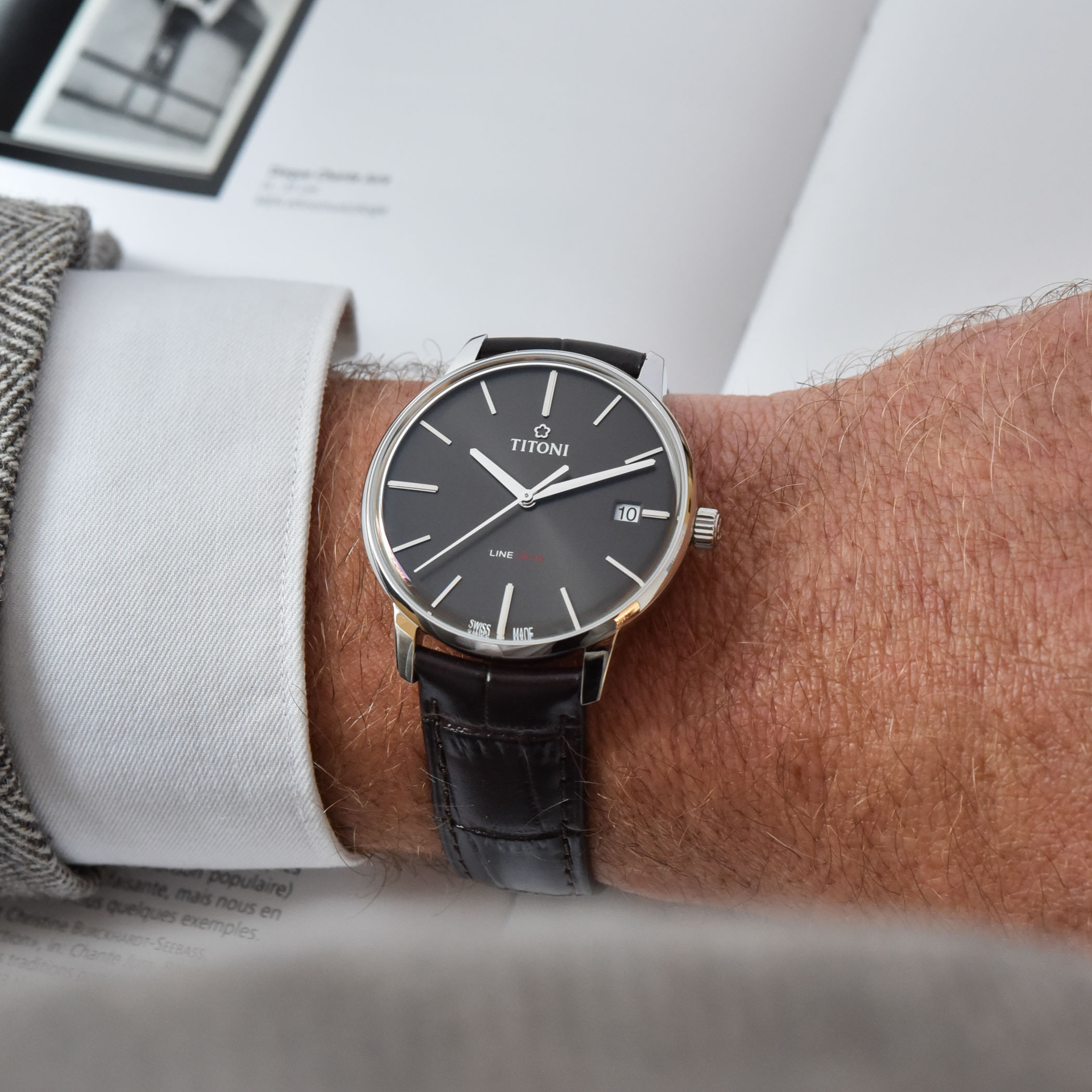 There’s been a trend in smartphones lately where companies push the edges of the display as close to the frame as possible for an “all-screen” effect. The LINE 1919 has that same vibe as the dial expands to the outermost edge with just a narrow bezel to frame it. The absence of a railroad track, Arabic numerals and such enhance the effect. The box-shaped crystal also distorts dial elements at sharp angles, visually wrapping things around the edge. It’s a cool, modern look. The applied silver indices almost touch the outer edges, while the ones at 12, 3, 6 and 9 o’clock are larger and faceted (the 3 o’clock index is interrupted by the date window). The sunray brushed dial comes in silver, anthracite or a rich Navy blue, and dial text is predictably minimal. The date window at 3 o’clock isn’t a big date complication, but is a bit larger than the norm and looks great. It’s a nice visual element to break up potential monotony. The silver hour, minute and seconds hands are simple and match the theme, and also very legible against all dial colours. There’s no Super-LumiNova to be found on the dial, but for such a piece, I don’t see that as a negative. 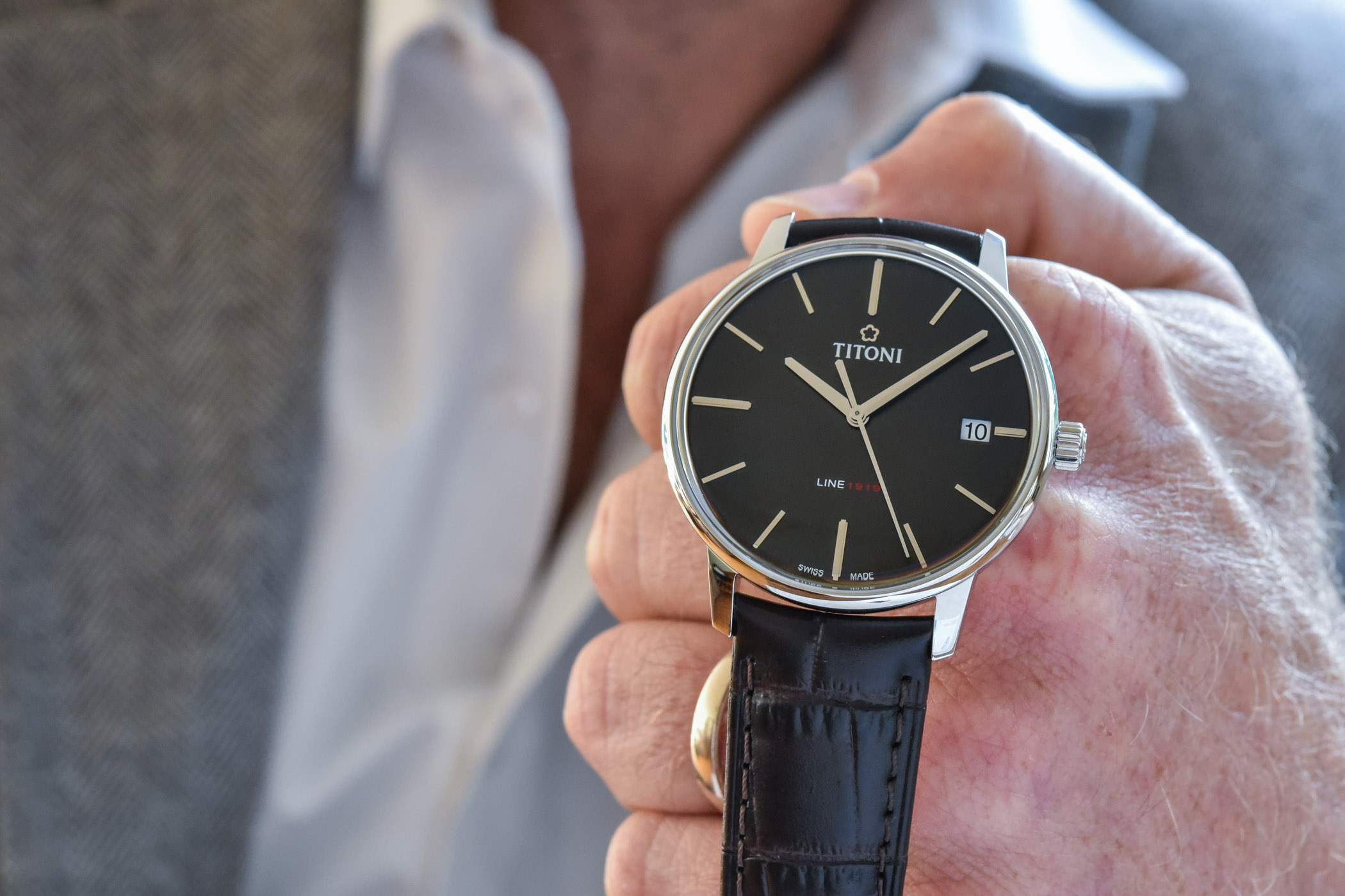 As mentioned above, the LINE 1919 is fitted with Titoni’s in-house T10 automatic, allowing the brand to join a relatively small Swiss fraternity of manufactures. It’s not traditionally decorated, but still has a great visual presence with an open-worked golden rotor and series of seven jewels on a single plate. It has a larger diameter than the norm at 29.30mm with 32 jewels, a beat rate of 28,800vph (4Hz) and a power reserve of 68 to 75 hours (3 days). Functions include central hours, minutes, seconds and date, and the rotor is unidirectional. 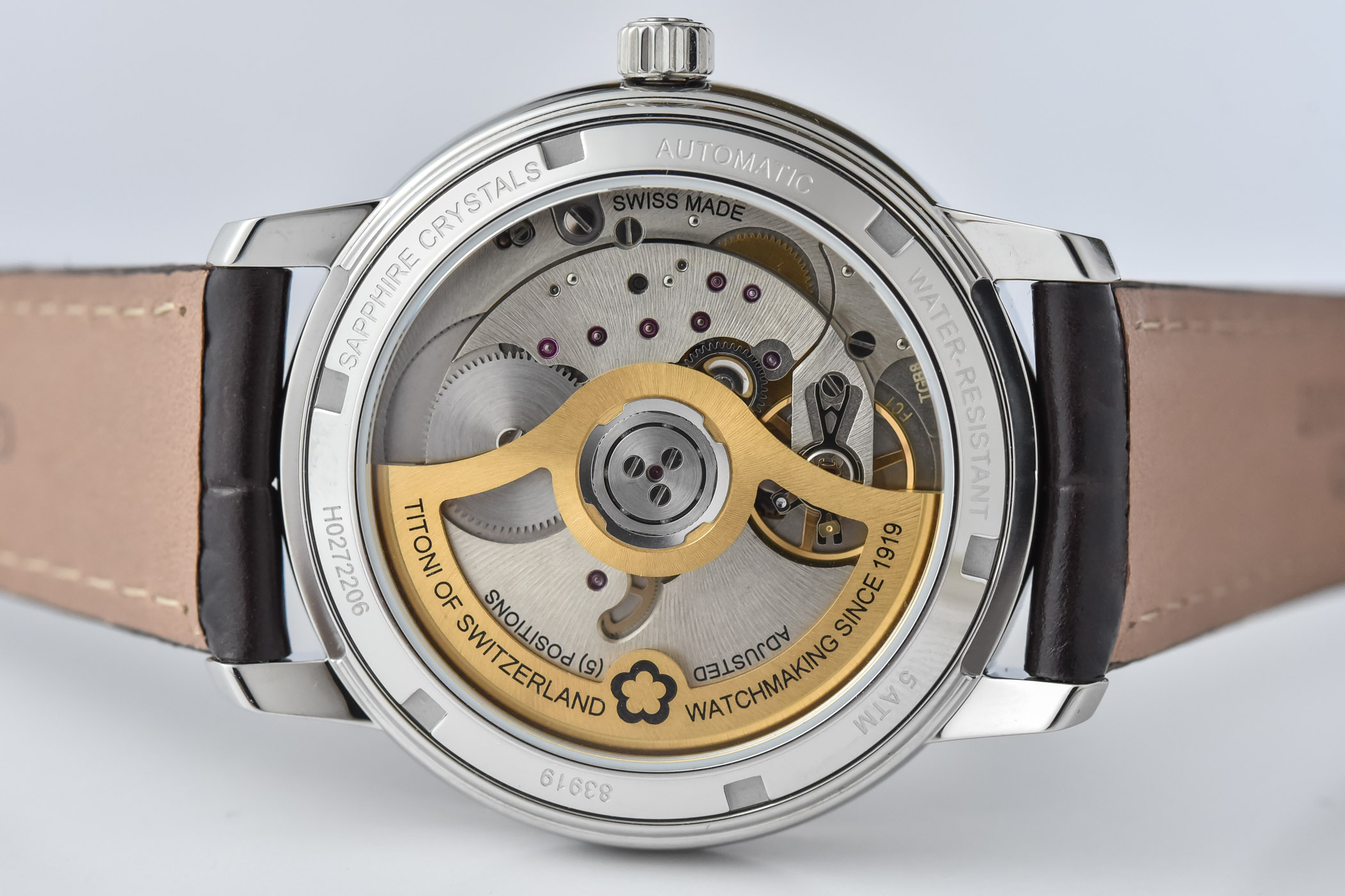 The Titoni LINE 1919 is one of those watches that really nails the “timeless” aesthetic. It’s both modern and classic, and wouldn’t look out of place on a wrist a half-century ago. It reminds me a bit of the Mido Commander Big Date in a more formal suit, but it’s definitely its own thing. The in-house T10 automatic really completes the package for me. It’s not just a nice Swiss watch, it’s the brand’s watch through and through. That’s a dynamic usually reserved for much pricier collections from Swiss/European brands. I suppose Nomos would be a good comparison in this regard. I admittedly wasn’t too familiar with Titoni prior to this review (and I suspect neither were many of you), which is a shame as the brand really is one of those hidden gems. If you’re in the market for a stylish, in-house piece that’s genuinely affordable (especially Swiss), definitely give Titoni a look. 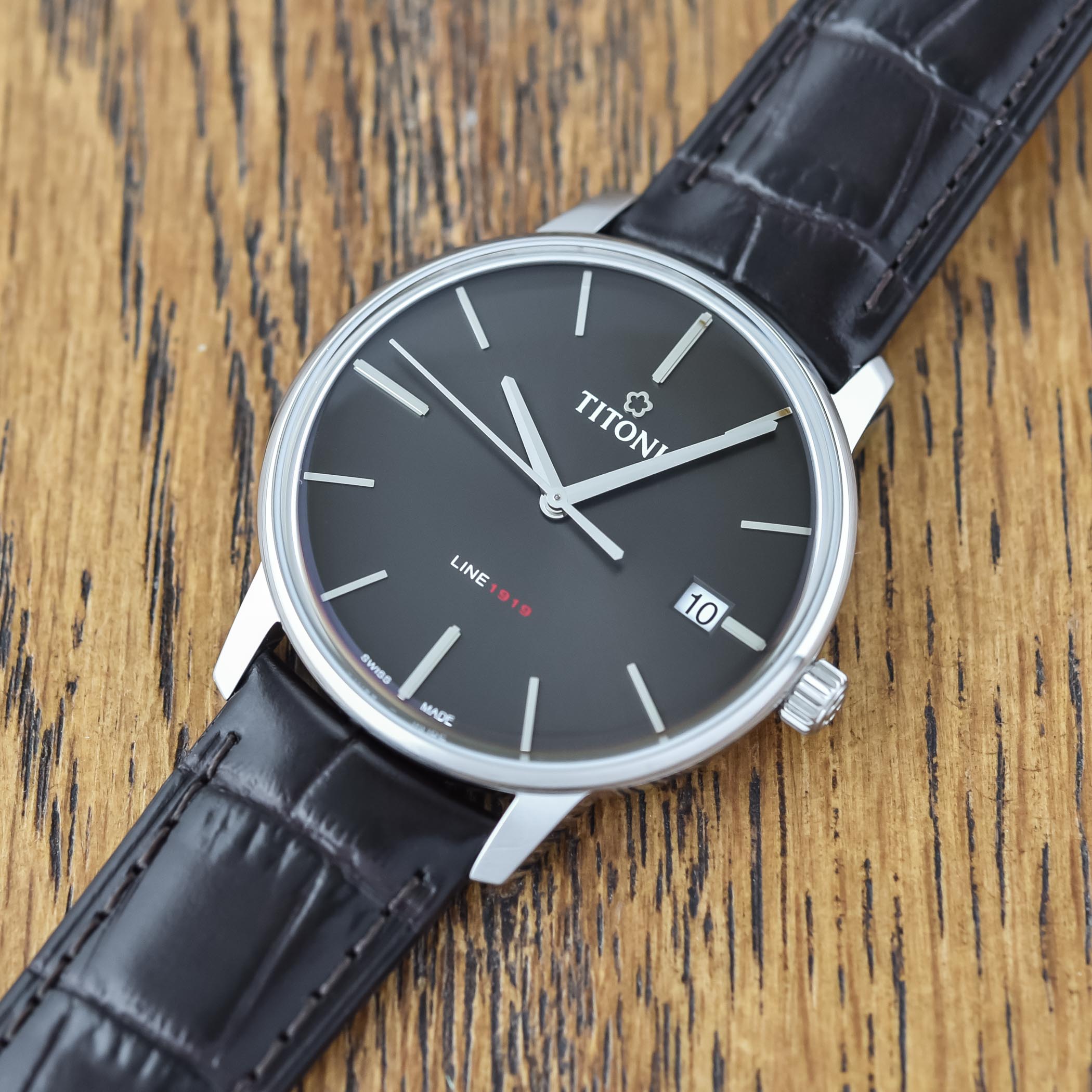 The Titoni LINE 1919 retails for EUR 1,620 with the steel bracelet and EUR 1,580 with the leather strap. That’s a real value proposition for what’s being offered. For more information and to place an order, please visit Titoni’s website.