Last week, Tudor introduced a relatively bold and unexpected new watch, the Black Bay Fifty-Eight Bronze. While there’s nothing entirely unprecedented in this, as both the BB58 and the use of bronze for Tudor are known territories, the combination is new. The real deal is that this watch comes with a special bracelet and will only be available as a “boutique” edition. Following our short introducing article last week, we had the watch with us for a hands-on session. It’s time to look at this Tudor Black Bay Fifty-Eight Bronze in the metal. And as we said in the title, there’s a lot of metal in this watch, and it’s not steel.

The evolution of the Black Bay Fifty-Eight

The Black Bay itself, as a whole collection, will soon celebrate its 10 years of existence. Saying that this watch was fundamental for the current success of Tudor would be an understatement. It has been THE main element of the brand’s comeback. What was originally a one-off watch when it was launched in 2012 with a 41mm case, an ETA movement, and a burgundy-coloured bezel has transformed into an entire collection covering most sports watch terrains. GMT, time-and-date, time-only, chronograph, vintage-inspired, contemporary, luxurious, two-tone or bronze, five different diameters, with or without rotating bezel… There’s pretty much everything you can imagine based on a sports/dive watch in this collection. Combining all complications, materials and colours, there is a total of 81 references available in the Black Bay collection only. And there are no signs of this slowing down following the introduction of several models this year with a revised Chronograph, an impressive watch with Master Chronometer certification and models with surprising materials. 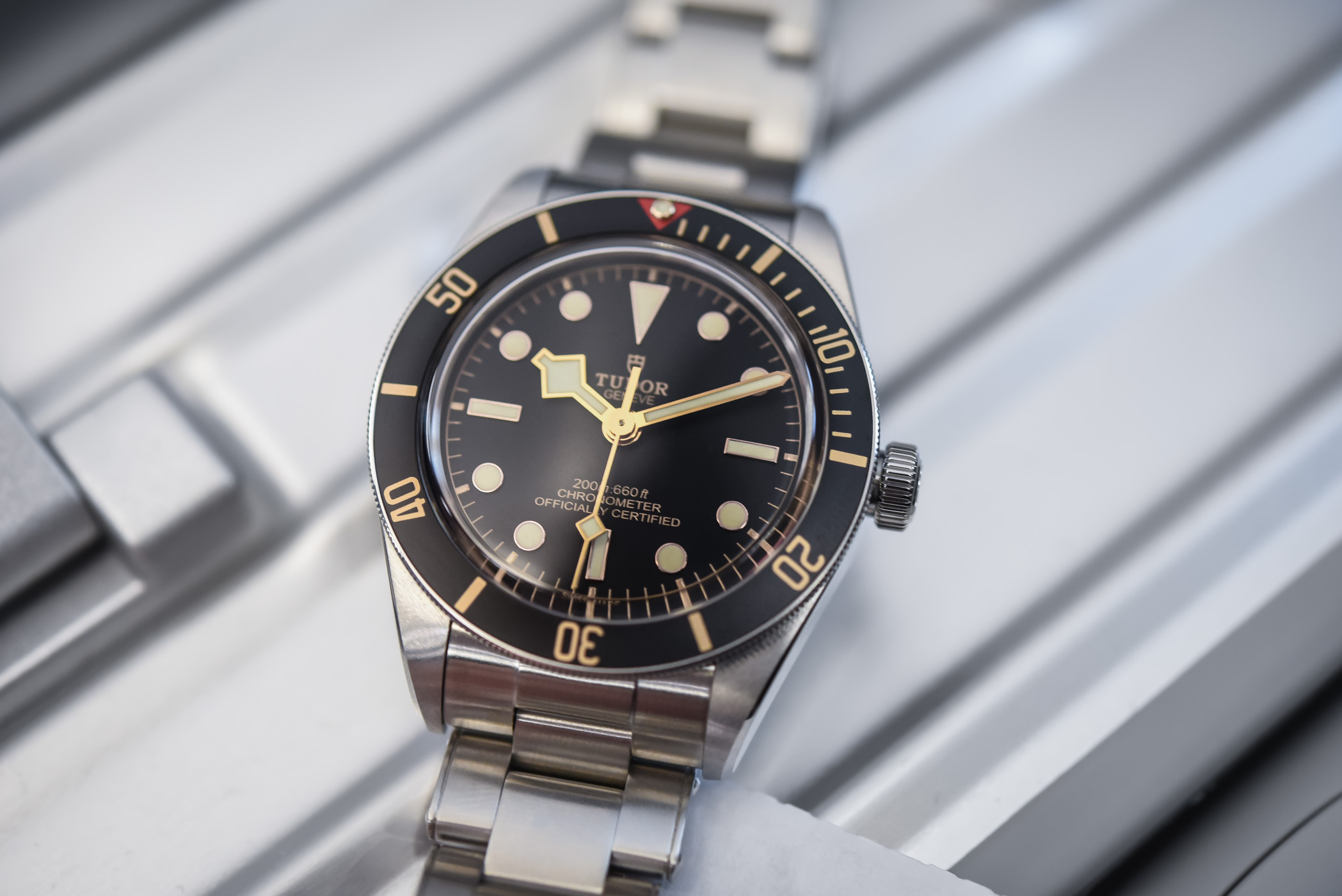 What’s more important today is the Black Bay Fifty-Eight, a watch that can be seen as the collection’s sweet spot. Launched in 2018, the BB58 is a smaller, slimmer, slightly more vintage-oriented take on the Black Bay. The main specificity is the reduced size of the case – and don’t be fooled by specification sheets; these 2mm change the watch drastically. With its ideally sized case, its retro vibe and modern equipment, it has since become the brand’s hottest watch. First presented with a black dial/bezel and gold-coloured accents, it has evolved over the years, first with the introduction of a more modern blue version last year. 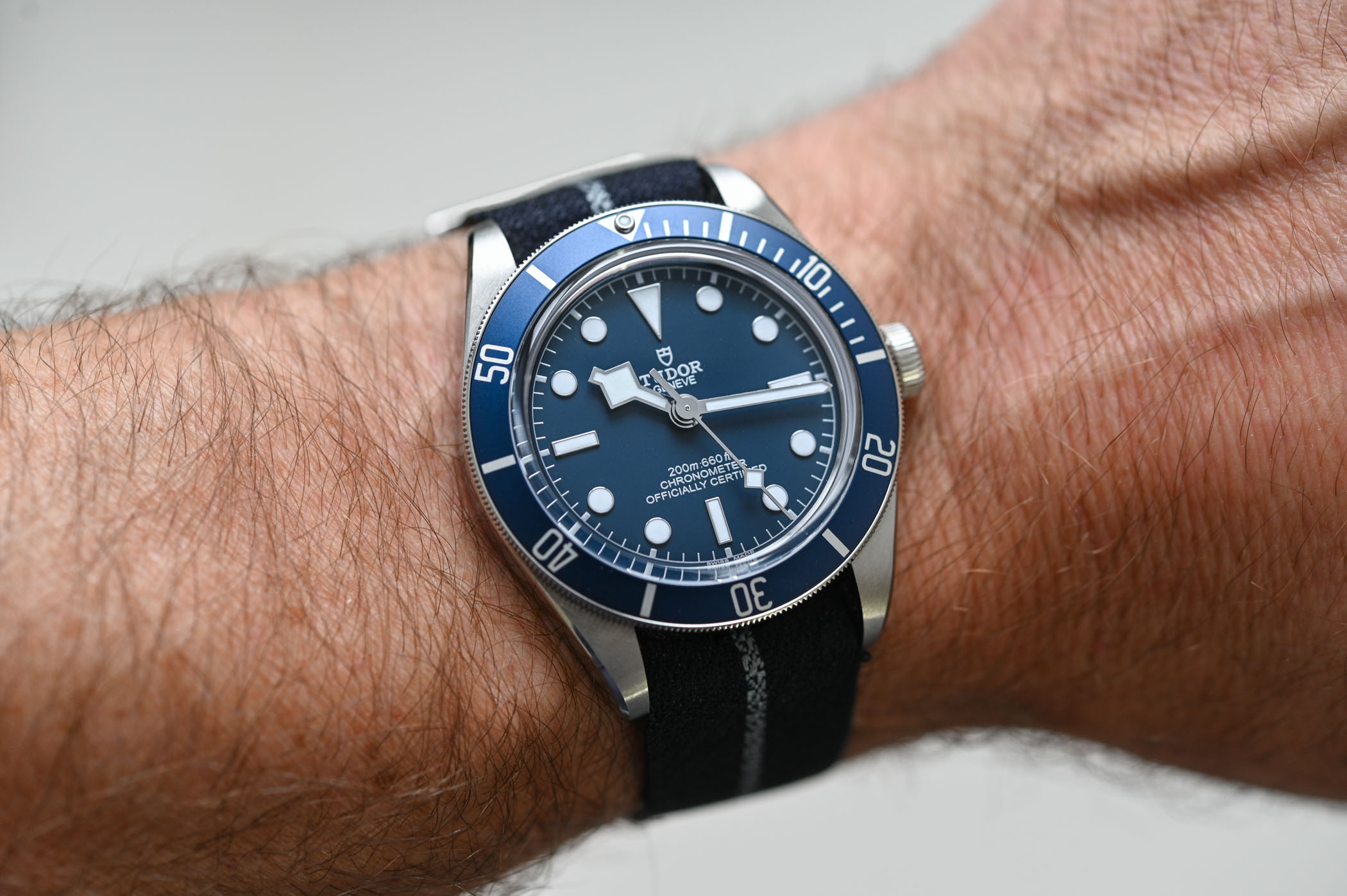 This year, for Watches & Wonders 2021, Tudor introduced two new editions of its BB58, this time playing with unexpected materials. First was a luxurious and rather bold edition with an 18k yellow gold case and green dial and bezel. Second, and probably the most desirable of the recent Tudor watches, the Black Bay Fifty-Eight 925 with a case made of solid silver, combined with a taupe coloured dial. With its unusual shine and ghost-like, faded dial colour, it really made an impression.

And while we thought Tudor had unveiled its watches for the year – as the brand usually introduces its collection in one go during the Basel or Geneva watch fairs – it changed tack and presented two things: the Black Bay Ceramic and its METAS movement, followed last week by the bronze BB58. 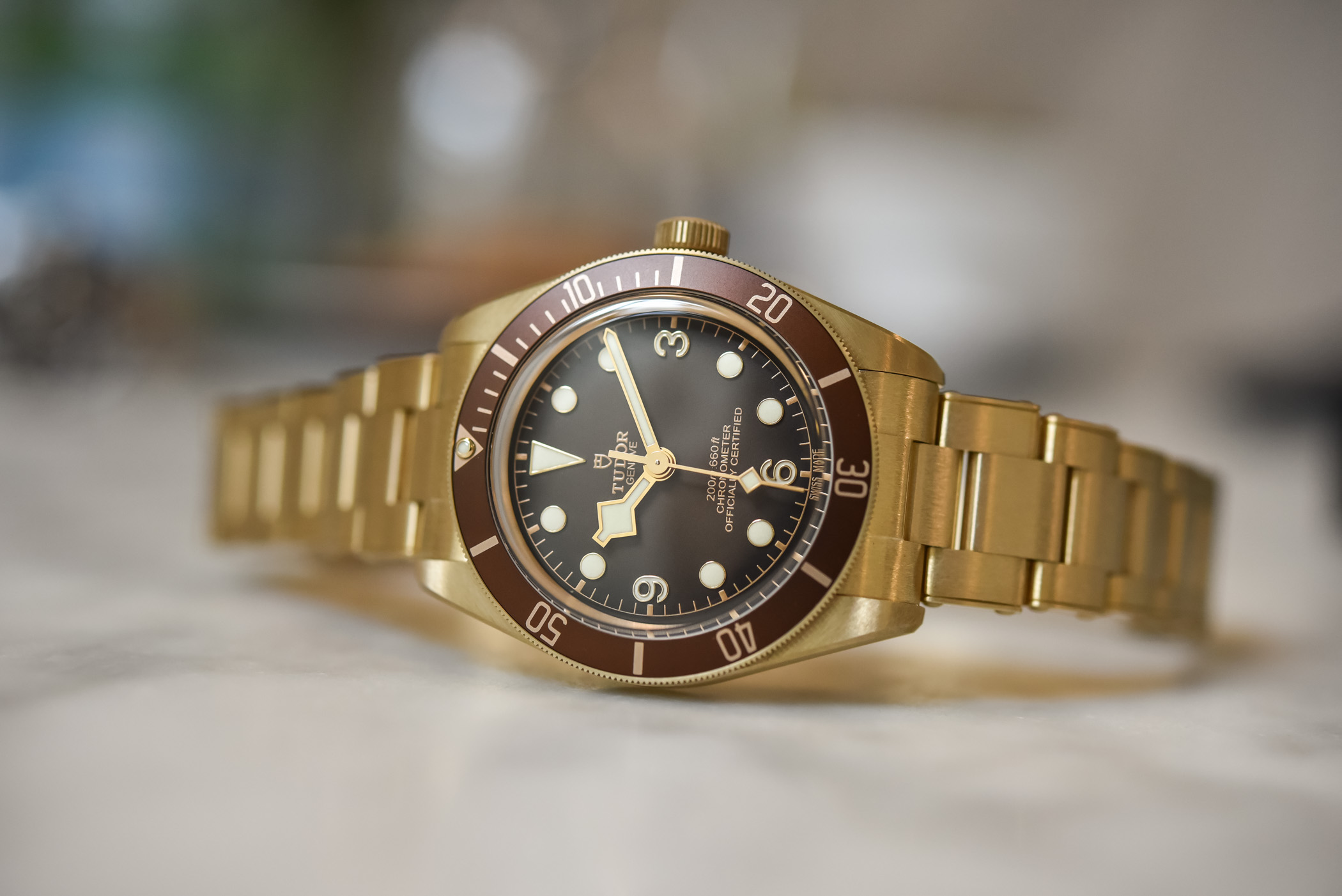 Bronze isn’t a new thing for Tudor; it was first used in 2016 with the Black Bay Bronze with brown dial and bezel, followed by a Bucherer BLUE edition and finally, the model now in collection with a gradient grey dial. There are a few things, in addition to the material, that made these bronze watches stand out from the rest of the BB models. First, they were larger with a 43mm case. Second, they were always worn on straps (textile or leather). Finally, their dials were different, with a 3-6-9 layout.

So, what’s has Tudor done? We could have easily expected the brand to pull out a shaker, take the best ingredients of both the BB58 and the BB Bronze, shake it for a few seconds, and voilà! But actually, the brand decided to add a few extra ingredients, a hint of spices and to take it off the classic menu. Like a special treat for initiated people… 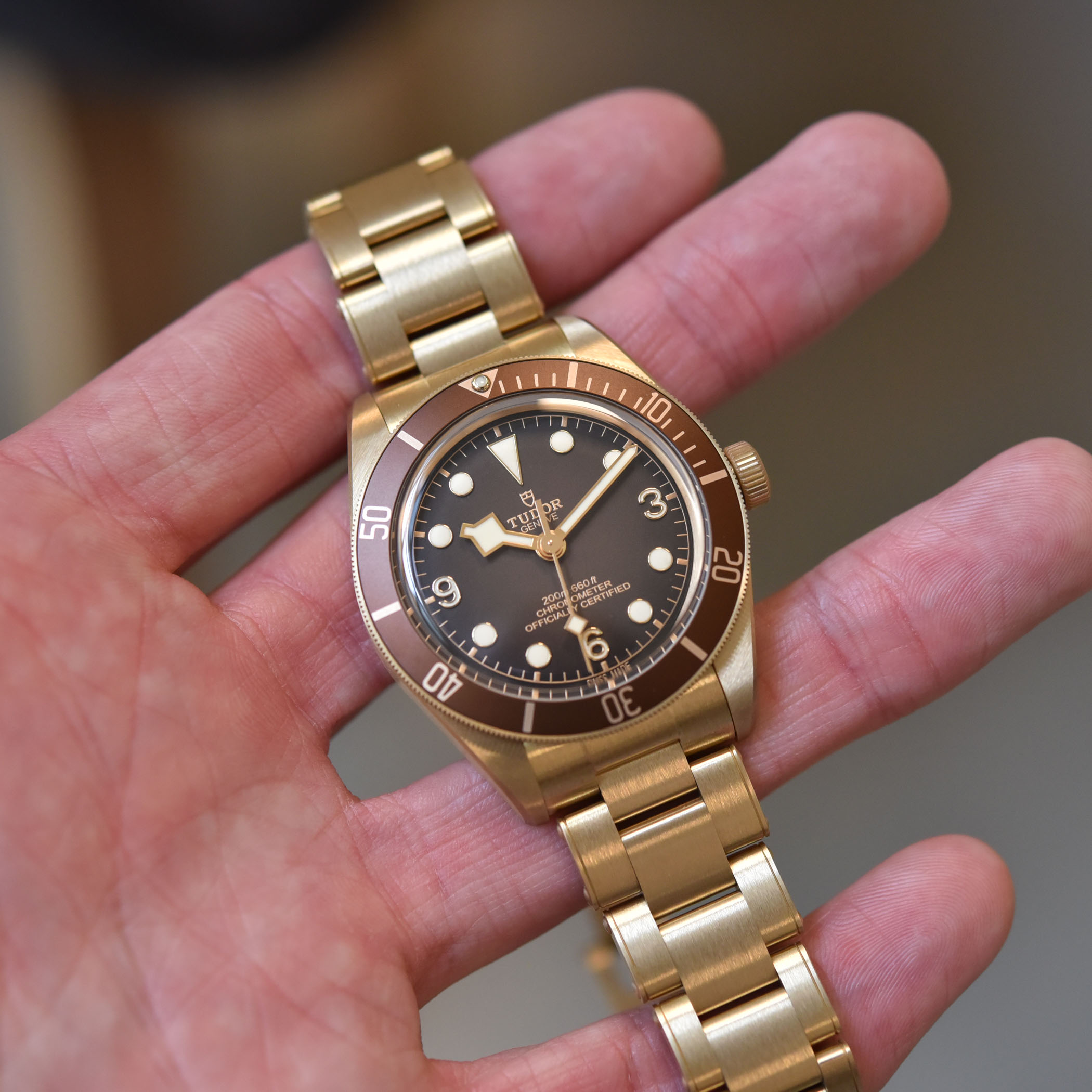 Back to basics. The Black Bay Fifty-Eight Bronze is indeed rather close in style and proportions to all other members of the BB58 family. No surprises here. If you like a well-proportioned, compact dive watch with vintage appeal, you’ll be served. The BB58 is basically an ode to classic dive watches from the 1960s with a 39mm diameter, a rather contained height of 11.9mm (which is far less than a classic Black Bay, at about 14.8mm), and an oversized crown without guards. Add to that a domed sapphire crystal, shaped just like an old plexiglass and a thin bezel with classic graduation, and you end up with a watch that oozes old-school diving instrument – for instance, the famous reference 7924 Big Crown, the first Tudor to be waterproof to 200 metres, presented in 1958. Lug-to-lug measurement is 48mm, which could seem rather large on paper, but actually wears pretty well due to the curvature of the case. 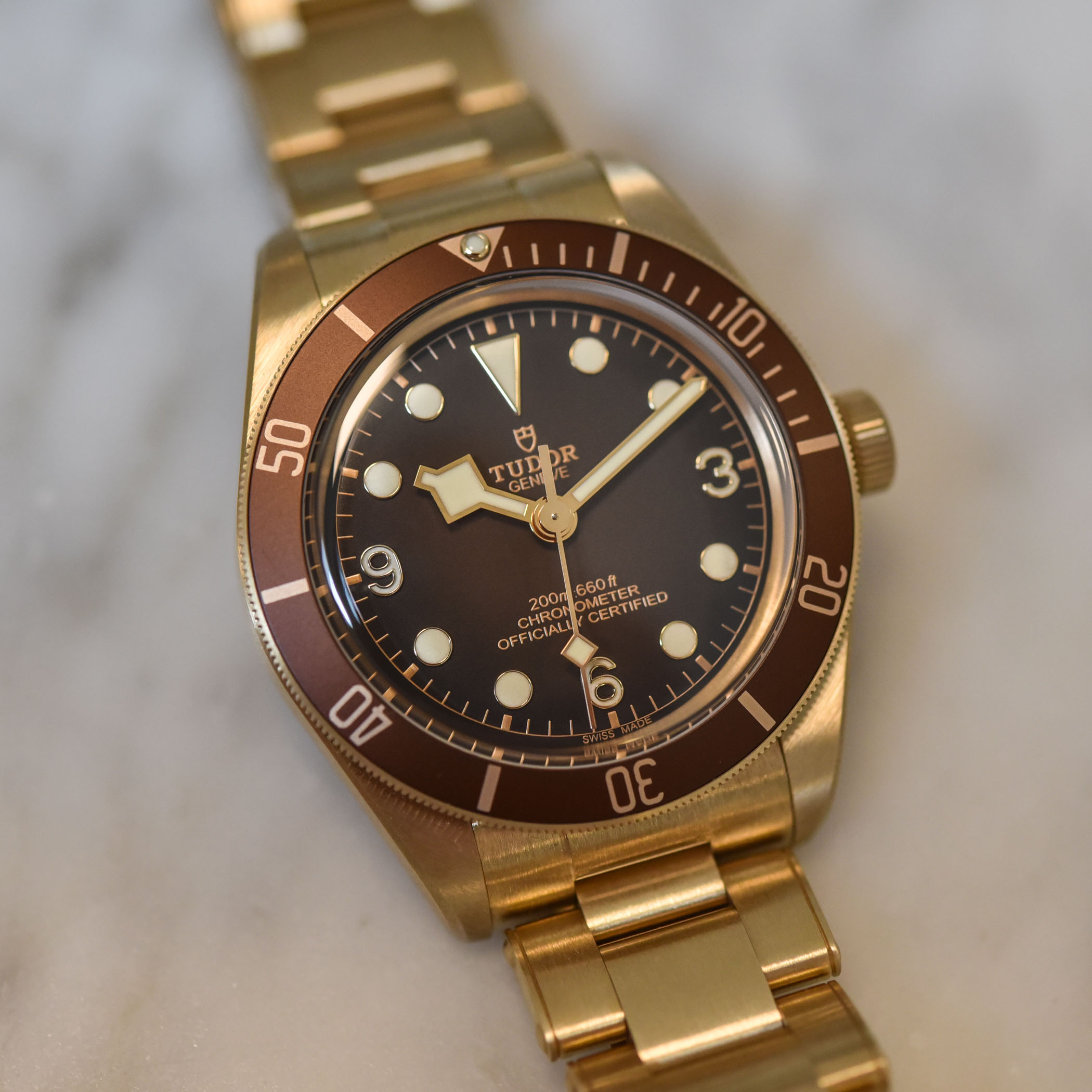 Compared to a traditional steel model, the main difference (obviously) is the case material. It is now made of bronze, and to be perfectly accurate, in an alloy known as aluminium bronze. The manufacturing process is also different from making a steel case – often stamped or milled. The alloy bars are cut into small cylinders, then heated before being stamped to adopt the rough form of the watch middle case. Then, no fewer than forty additional steps (milling, threading, drilling) are required to obtain a bronze case ready to be cased up. The result is a case that can still retain the 200m water-resistance of the steel models.

Regarding the material itself, it is identical to previous bronze BB watches. The aluminium bronze alloy is known to develop a relatively limited patina over time, as it remains fairly stable even in harsh conditions, such as salty water or an acidic environment. We’re talking surface oxidation only, and the process is reversible since aluminium bronze can easily be brought back to its original colour by cleaning it. A few differences are to be noted compared to steel BB58 models. First, the bezel and the crown are also bronze. Second, the case is entirely brushed, including the sides and bevel that runs from one lug to the other. Finally, the caseback is made of stainless steel and is coated in bronze-coloured PVD. 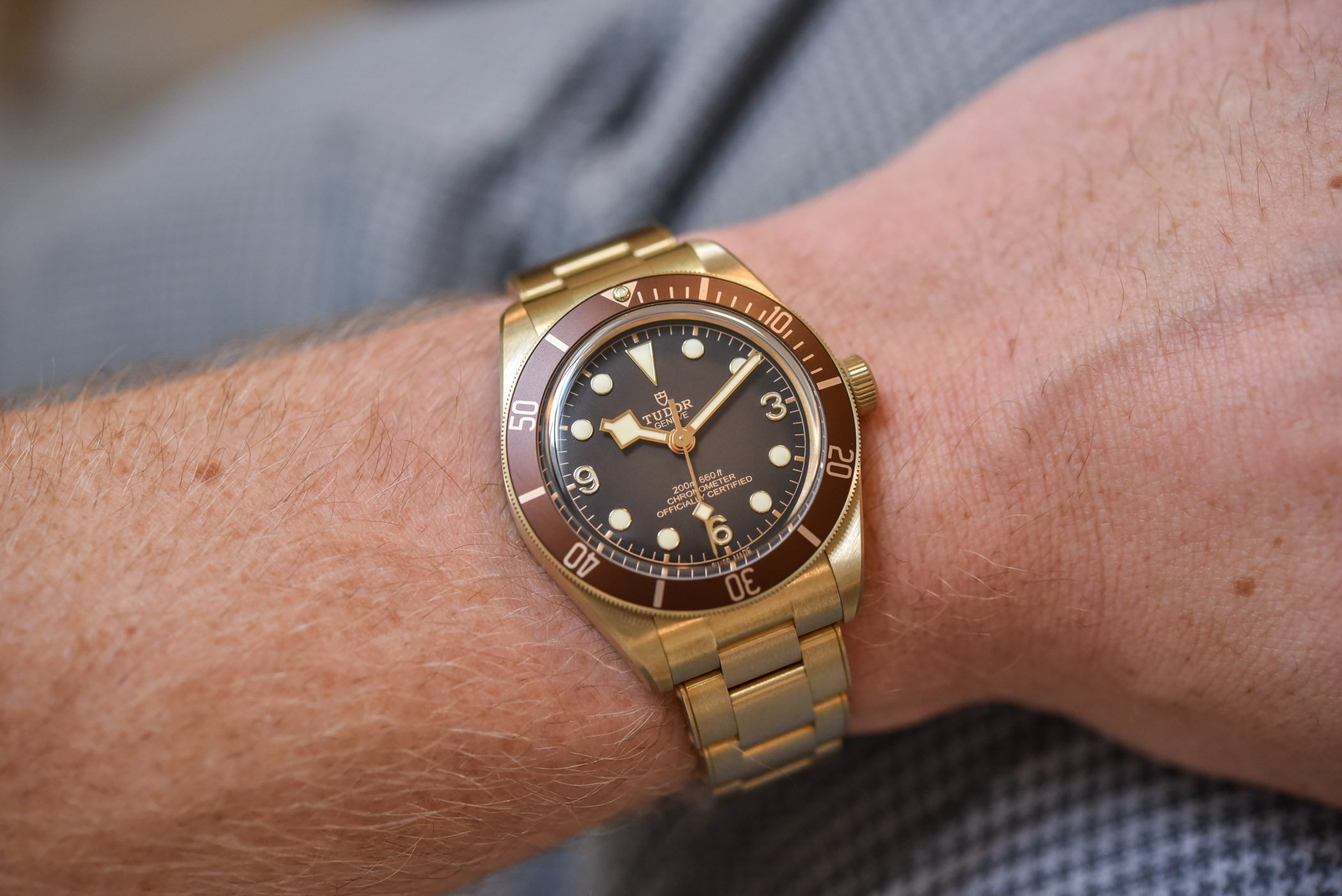 On the wrist, the watch makes an impression, especially when it is new, like the model we had for our photo shoot. It has a bright, almost gold sheen that doesn’t make the watch especially discreet. It’s still less flashy than an 18k yellow gold case, though, and in any case, the effect of time and environment will change the colour of the case to something less vivid, with a slight green tone. Nevertheless, it has a lot more impact than a steel version. As for the weight, we couldn’t measure precisely this Black Bay Fifty-Eight Bronze, but it feels identical to a steel watch. And dimensions being identical too, the watch wears just about the same. 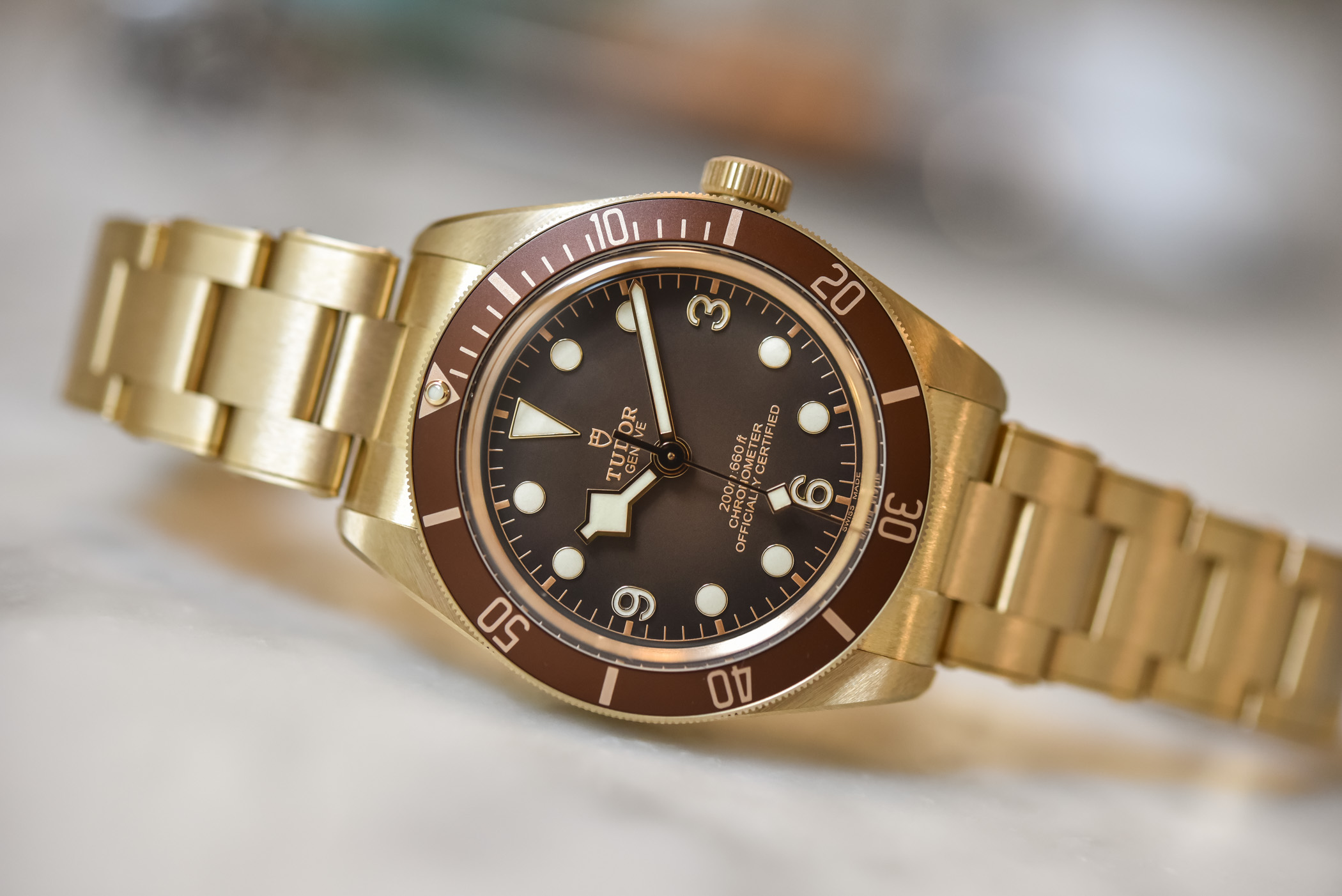 The other evolution concerning this Black Bay Fifty-Eight Bronze is the dial, which links this watch to other bronze models in the BB collection. Tudor reintroduces the distinctive layout with applied Arabic numerals at 3, 6 and 9 o’clock, something that is exclusive to bronze editions. The dial itself is also new. Contrary to our first impression, the colour is unprecedented and different from the tone used on the 2016 BB Bronze with a brown dial. Named brown-bronze, the colour is more saturated, more pronounced and slightly darker too. Also, Tudor has adopted one of the hottest trends of the current market, the gradient dial. Indeed, the dial of the BB58 Bronze has a dégradé effect, with the edges of the dial darker than its centre. The bezel is also colour matched, with a brown-bronze anodised aluminium insert. To give coherence, the hands, the applied indexes, the minute track, the logos and the bezel’s 60-minute scale are all gold-coloured. 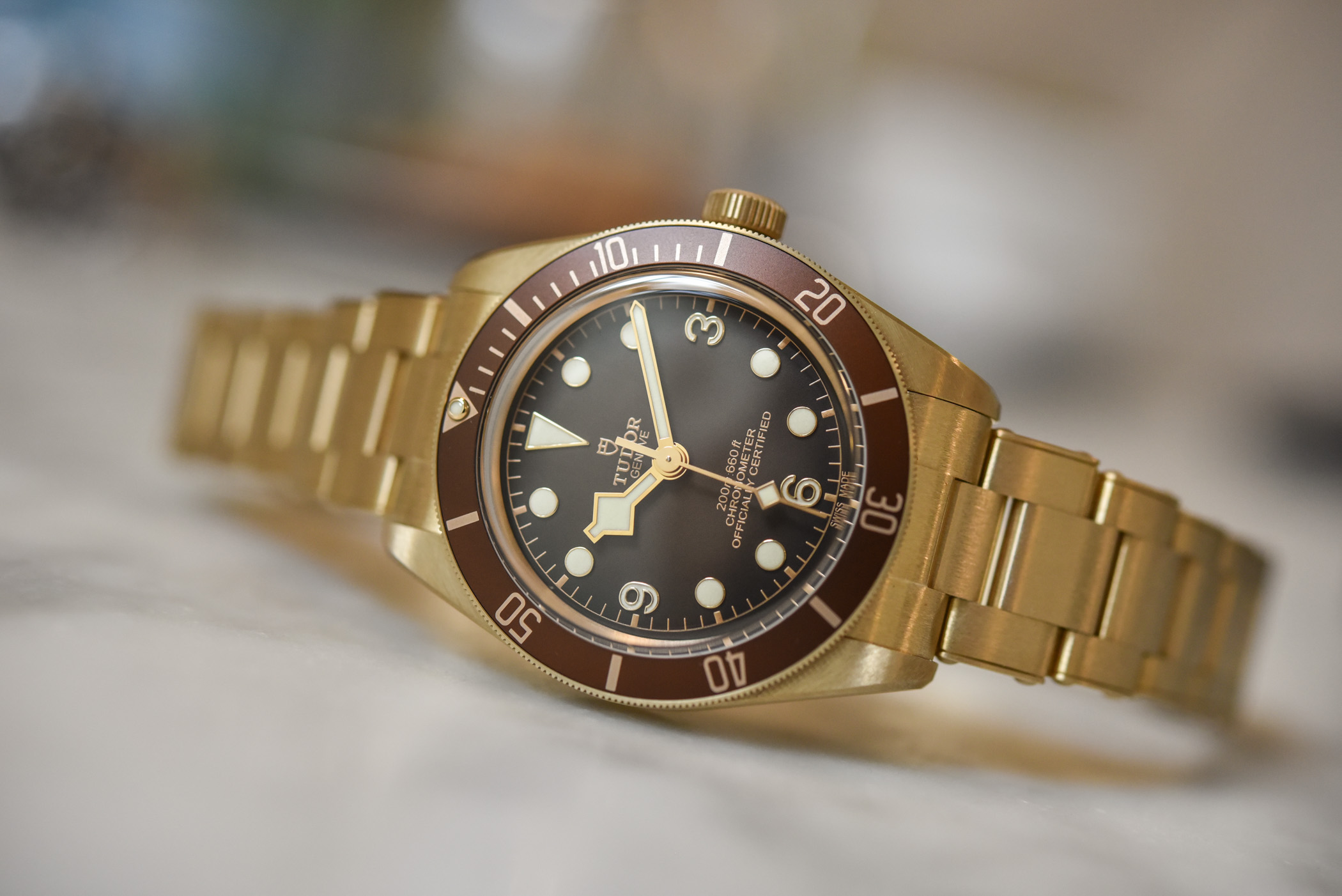 Inside the case, no surprises, as we find the same COSC-certified manufacture calibre MT5400 fitted inside other members of the Black Bay Fifty-Eight family. : Modern and designed to be precise and reliable, this automatic movement runs at 4Hz and is equipped with two interesting features: an antimagnetic silicon balance spring and a traversing bridge for better resistance to shocks. As usual, the power reserve is comfortable with 70 hours of energy when fully wound. Note that Tudor adjusts the movements to an average daily variation between -2 and +4 seconds when the watch is fully assembled (thus surpassing COSC criteria).

While everything we explained above is more of a natural evolution of the model, the bronze bracelet might be the most noticeable element of this watch. Indeed, a rare feature in the watch industry (only Oris has done it so far), the Black Bay Fifty-Eight Bronze is bronze through and through, down to its bracelet and clasp. The design of the bracelet itself remains identical, with its cool, vintage riveted profile. Like the case, it is entirely brushed, even on the sides. 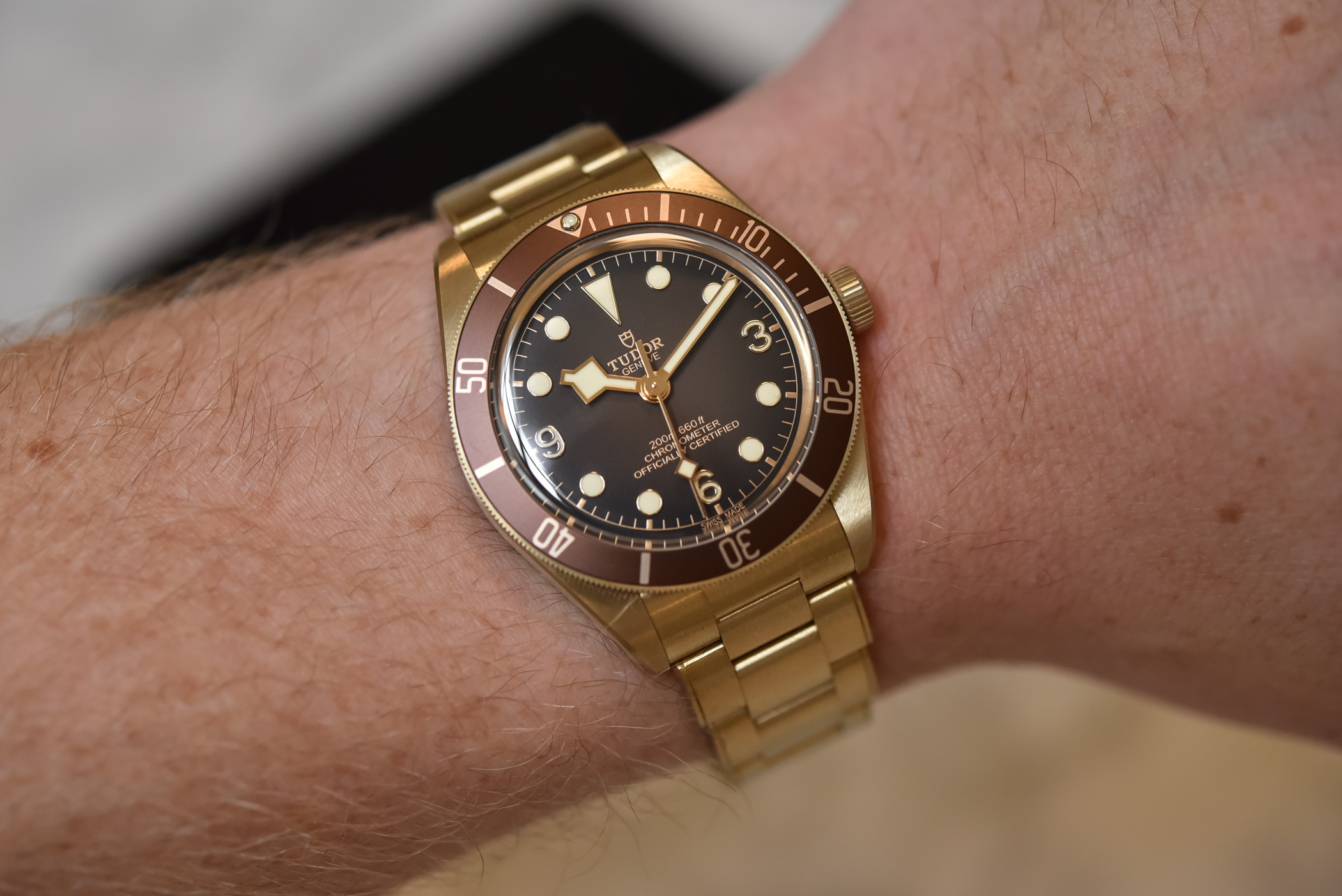 An important update introduced on this BB58 Bronze is the presence of a redesigned folding clasp with a micro-adjustment system. A first for Tudor, the  “T-fit” can extend the bracelet up to 8mm in five positions. And while the brand hasn’t communicated yet on its implementation on the rest of the collection, we expect this to happen soon. 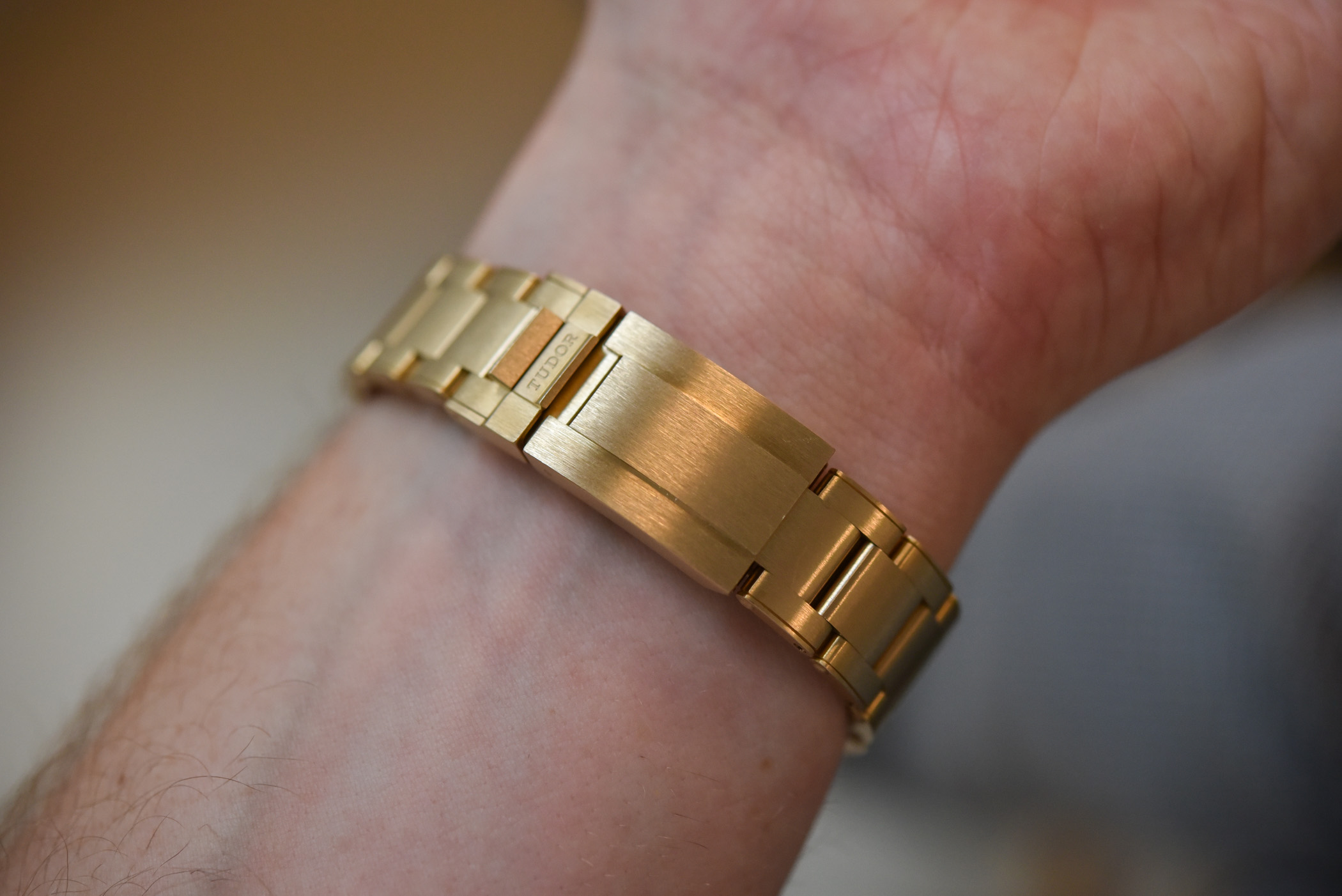 But the same question we asked about the Oris bronze release concerns the skin’s reaction to this solid bronze bracelet. The inner surface of the links isn’t coated with any protective element or varnish. Will the patina transfer to the skin? I’m sure Tudor has tested this more than we can imagine, and I can’t see a brand like this releasing a bracelet that would be dangerous for its owners. However, I’m still curious to see how this watch will interact with its wearer after a complete summer on the wrist… And to be fair, I had the same reservations concerning the case of the Black Bay Fifty-Eight 925. 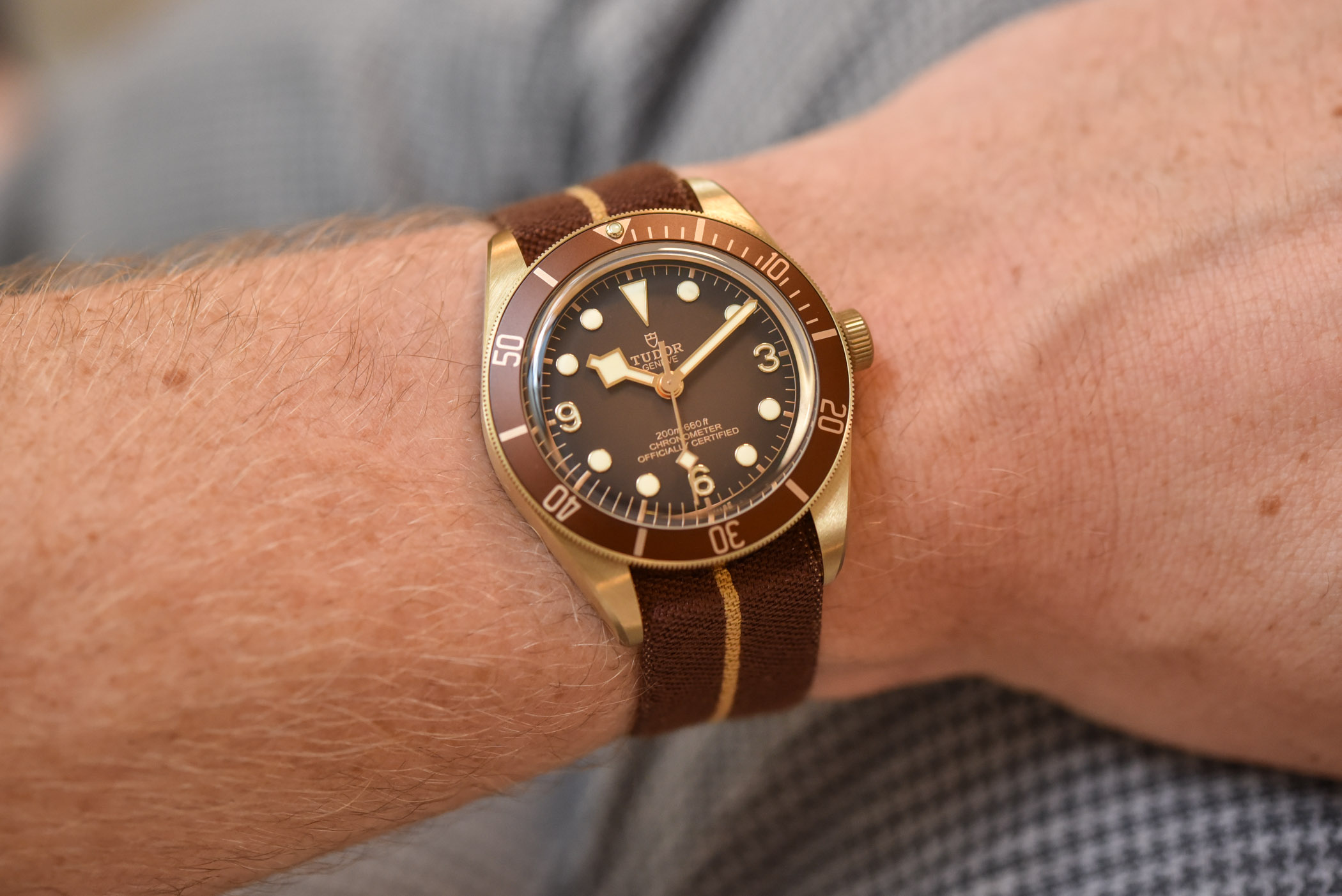 In addition to the bronze bracelet, the Black Bay Fifty-Eight Bronze is also delivered with a brown-bronze jacquard fabric strap with a yellow stripe and a bronze buckle.

The Tudor Black Bay Fifty-Eight Bronze (reference M79012M-0001) is released as part of the permanent collection, meaning that it won’t be limited. However, don’t expect to find an example at your local authorised retailer since it is a “boutique” edition, a first for the brand. With this, Tudor wants to emphasise its growing network of official boutiques, which now comprises about 50 points of sales. However, there are no such official boutiques in the US (there’s one in Toronto) and only three in Europe (Cologne, Rome and London). Most of them are located in Asia… Meaning that the demand for these bronze BB58 will certainly be extremely high.