It’s no easy feat to craft a timepiece that appeals equally to EDM lovers and serious watch collectors, but Hublot may have done just that.

On Thursday, the Swiss watchmaker released a new exclusive watch in collaboration with French musician, DJ Snake. The 45 mm watch, dubbed aptly enough as the Big Bang DJ Snake, boasts a bezel and case with an iridescent polish alongside satin-finished titanium. The figure’s case-back also has a colorful glow with sapphire crystals, while the words “limited-edition” are engraved into the case, lest anyone forget that only 100 examples of the timepiece are available. With a sapphire dial, the model’s silver metal counters contrast handsomely with a conceptual map of the world in gradients of blue and purple. Equipped with Hublot’s Calibre HUB1242, the new Big Bang comes with two rubber strap options in camouflage or ribbed black. 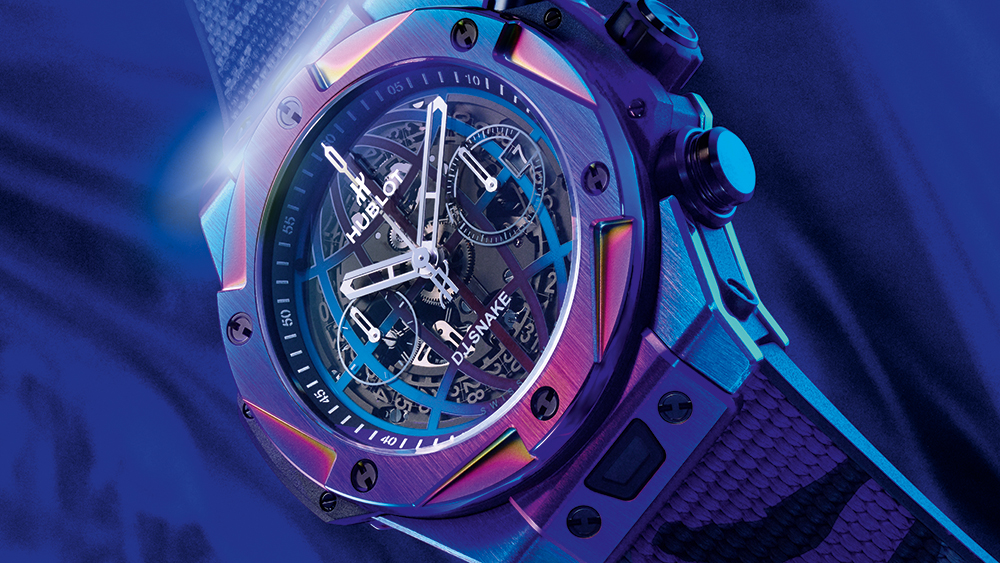 To achieve the striking “Newton’s Rings” effect—that iridescent detailing—each watch undergoes a process that is similar to a black PVD treatment. The piece’s titanium elements receive a super-hard coating paired with coloring. Its components are then precisely oriented to a specific position to achieve DJ Snake’s desired colors. Once complete, the applied colors change effortlessly in the light and different angles. The surface of the parts is hardened before the iridescent treatment in order to improve its performance. Hublot followed each painstaking step in order to ensure all 100 examples match the same gradients of color.

DJ Snake designed the cut-outs on the outer edge of the bezel himself. The map of the world within the Big Bang’s dial is a nod to his travels across the globe for concerts, as well as his music’s reach to listeners worldwide. The lower section of the watch is skeletonized and treated with a black fumé finish to create sections. This semi-transparent finish allows collectors to gaze at the HUB1242 Unico movement, which is a flyback chronograph with a power reserve of 72 hours. Even better, both Big Bang DJ Snake straps are interchangeable by way of a patented one click system. The figure’s clasp also features an “Newton’s Rings” effect in black PVD titanium as its bezel and case.

DJ Snake first garnered mainstream attention back in 2013 with the release of his track title “Turn Down for What.” Since then, he has collaborated with a who’s who of high-profile artists, including Justin Bieber, Selena Gomez, Kanye West, Diplo and more. The DJ is the first French artist to have two songs with over a billion plays on Spotify.

He also has a passion for watches and has been an ambassador for Hublot since 2018, when he presided over the decks at Hublot’s closing evening during the FIFA World Cup in Russia. The duo’s collaborative timepiece has arrived just three years later as the first within the partnership.

“To be able to wear–and also offer my fans–a watch which reflects my personality is something that has been very important to me since the start of my partnership with Hublot,” he said in a statement. Fans and watch collectors can now snap up the limited-edition Big Bang DJ Snake timepiece for $26,200 on Hublot.com.