The name BCHH might not be familiar to you, but it is the result of a dream, that of a longtime seasoned collector to create his high-end watchmaking brand. The acronym of Benjamin Chee Haute Horlogerie, the brand was founded in 2019, the man behind Celadon (created in 2012) and Milléchron (created in 2018), to put his country, Singapore, on the map of traditional watchmaking. And talking about maps, the new watch to surface from this project couldn’t be more relevant, being a classical and refined world time watch. Today, we take a look at the BCHH Celestial Voyager, a series of seven ultra-exclusive watches made together with Andersen Genève and showing impeccable, traditional execution. 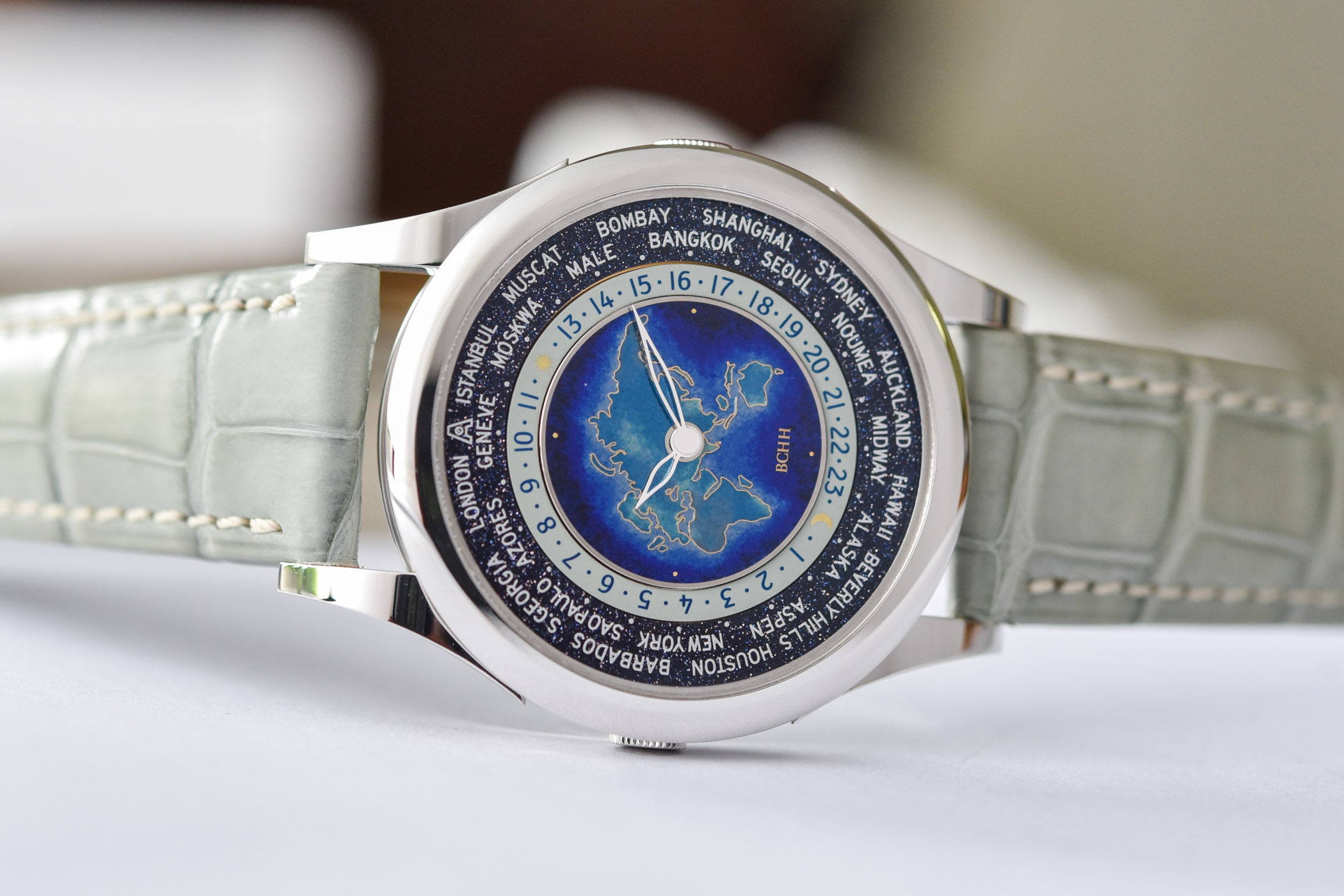 Behind BCHH is a man named Benjamin Chee, who’s been collecting watches for some years and decided to move to the other side, by creating his own brands. Chee first created Celadon in 2012, with a focus on dress watches and decorative crafts. In 2018, he then inaugurated a second brand – Milléchron – with the intention to make luxury watches with a sporty feeling. And then came BCHH, a brand that is clearly a few steps further in terms of execution, an incarnation of his dream of Haute Horlogerie. “BCHH was born out of a personal dream to combine traditional handmade Haute Horlogerie with artisans from other fields of classical high craftsmanship,” explains Benjamin who “wish to put his home country Singapore on the map of Haute Horlogerie not just as a consumer, but also as a creator (…) and to combine Singaporean excellence with traditional Swiss watchmaking.” To achieve this, the idea is to partner with some of the best manufacturers in Switzerland to create refined and sleek watches with a focus on complications and artistic crafts. And looking at the BCHH Celestial Voyager, the mission is completed.

Behind this refined and high-end world time watch is one of the specialists of this complication, AHCI co-founder and master watchmaker Svend Andersen (from Andersen Genève). This man had been working, prior to creating his own brand, at Patek Philippe for nine years at the Atelier des Grandes Complications during the 1970s, working mostly on Patek’s watches with Louis Cottier world time complications – Cottier being the father of all world time watches, created in 1930 and adapted to wristwatches in 1950. Following this experience, Andersen founded his brand. Since 1980, the world time complication has been a great part of his production, with no fewer than five different watches equipped with this function, but less than 1,500 watches produced in total – this includes the Communication, the Christopher Columbus, the Mundus, the 1884 and the Tempus Terrae.

BCHH isn’t a manufacture itself and thus has to partner with watchmakers to build its watches, which are, however, the result of Benjamin Chee’s imagination. And for this watch, Chee has chosen one of the most revered watchmakers of Switzerland who knows the desired complication like the back of his hand: Svend Andersen. What is the Celestial Voyager? It’s an elegant, slightly modernized take on the classic Cottier twin-crown world time watch displaying high-end crafts with traditional execution, including cloisonné enamel, guilloché, precious materials and a hand-finished movement. And it’s also a highly exclusive watch, which will be produced in low quantities and with numerous customisation options resulting only in unique models. 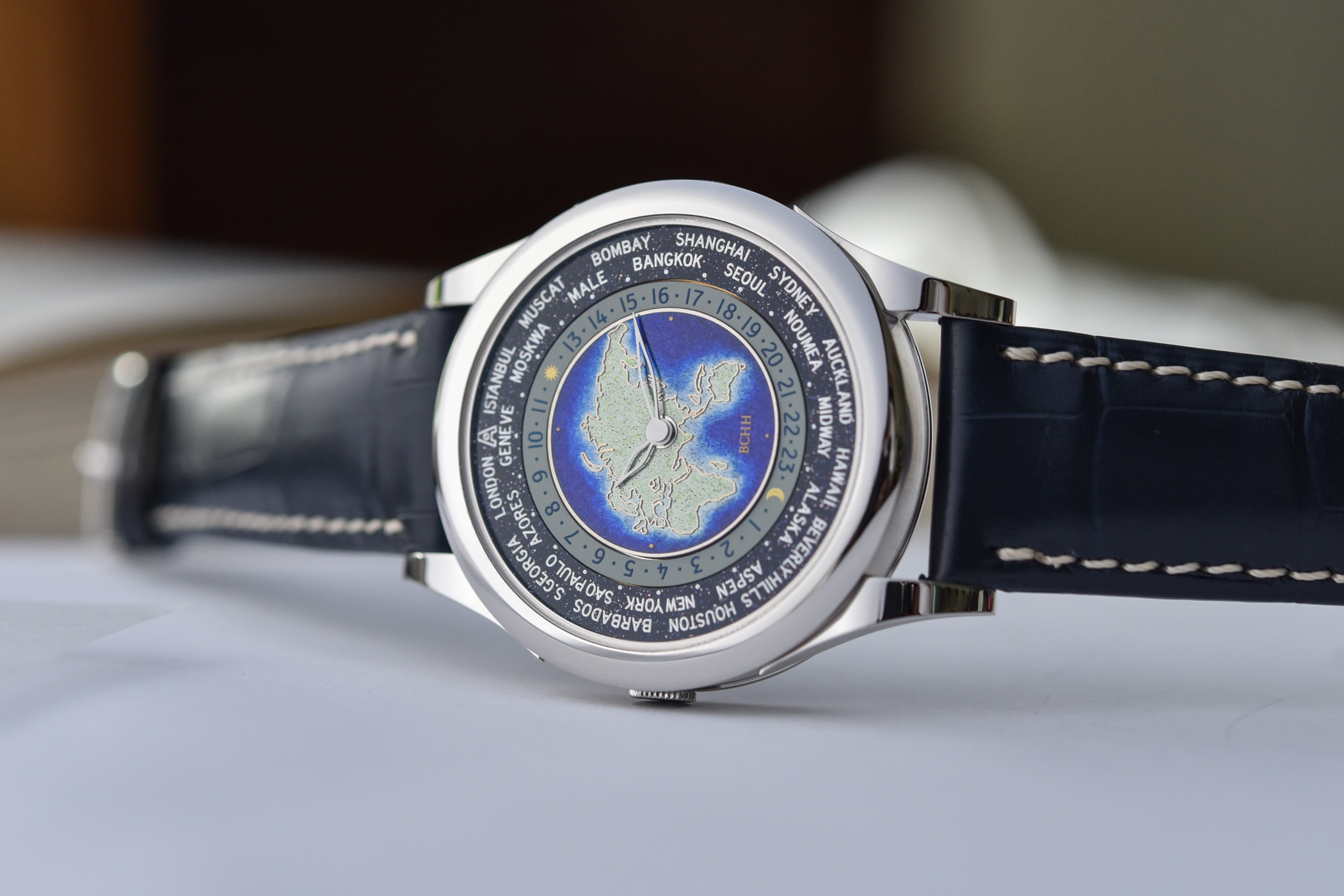 The BCHH Celestial Voyager is housed in a sleek, compact case made of 950 platinum, executed with beautiful decoration. Measuring 37.7mm in diameter and only 10.1mm in height, its surfaces are either polished (lugs and bezel) or finely satin-brushed (caseband). The most striking element of design in this case is the shape of the lugs, which are named “ailes d’aigle” or eagle’s wings lugs, which are separately soldered and give the watch a slender look. 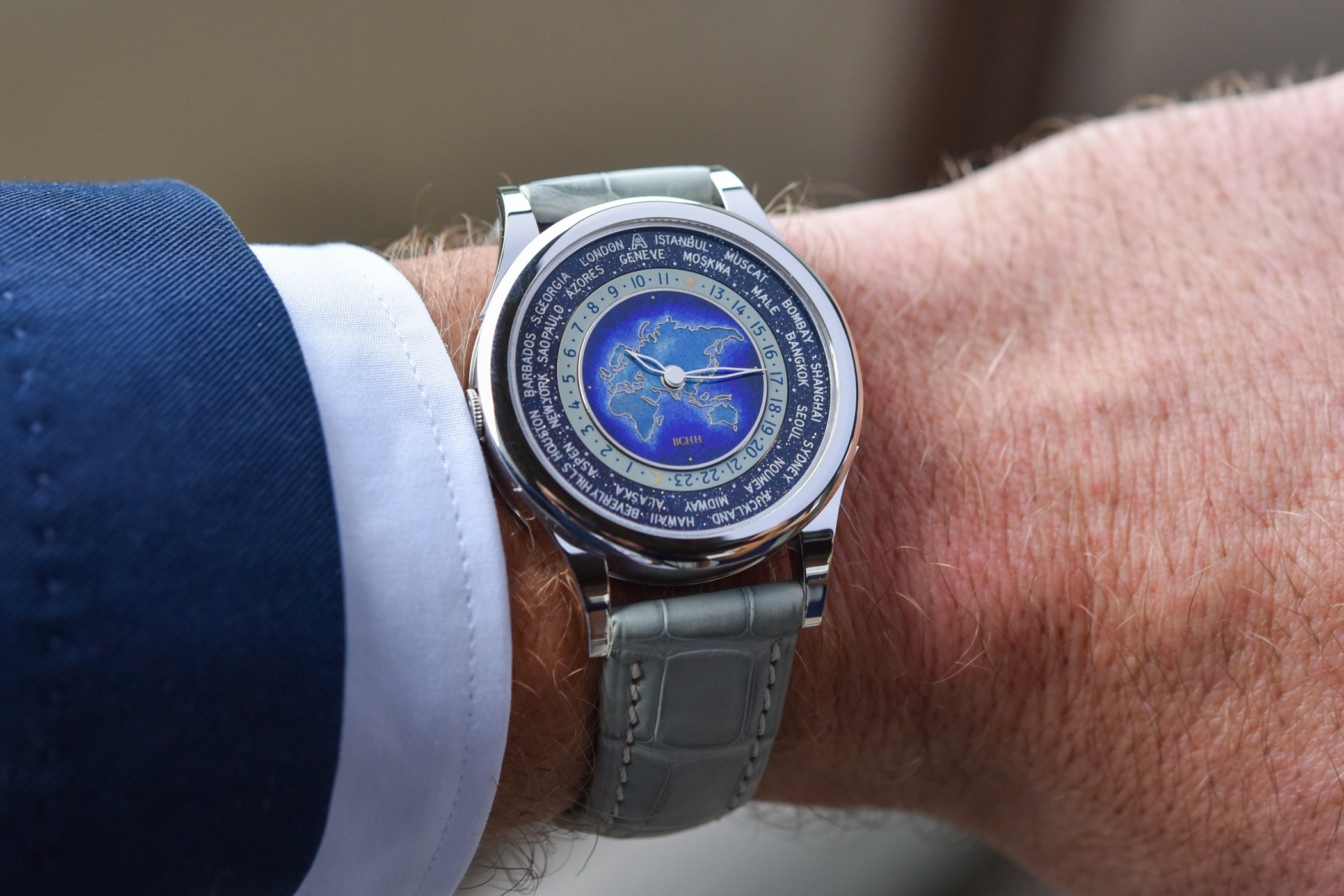 The second point of differentiation comes from the typically Cottier architecture, with two symmetrical crowns. Both are extremely fine and almost recessed into the casebands, and add to the overall restrained elegance of the watch. The left crown, bearing the BCHH seal, adjusts the city ring, while the right crown, engraved with the Andersen Genèce logo, adjusts the time. The watch is worn on a handmade alligator leather strap with alligator lining; its colour depends on the client’s request – even though this light grey strap pairs beautifully with the platinum case. 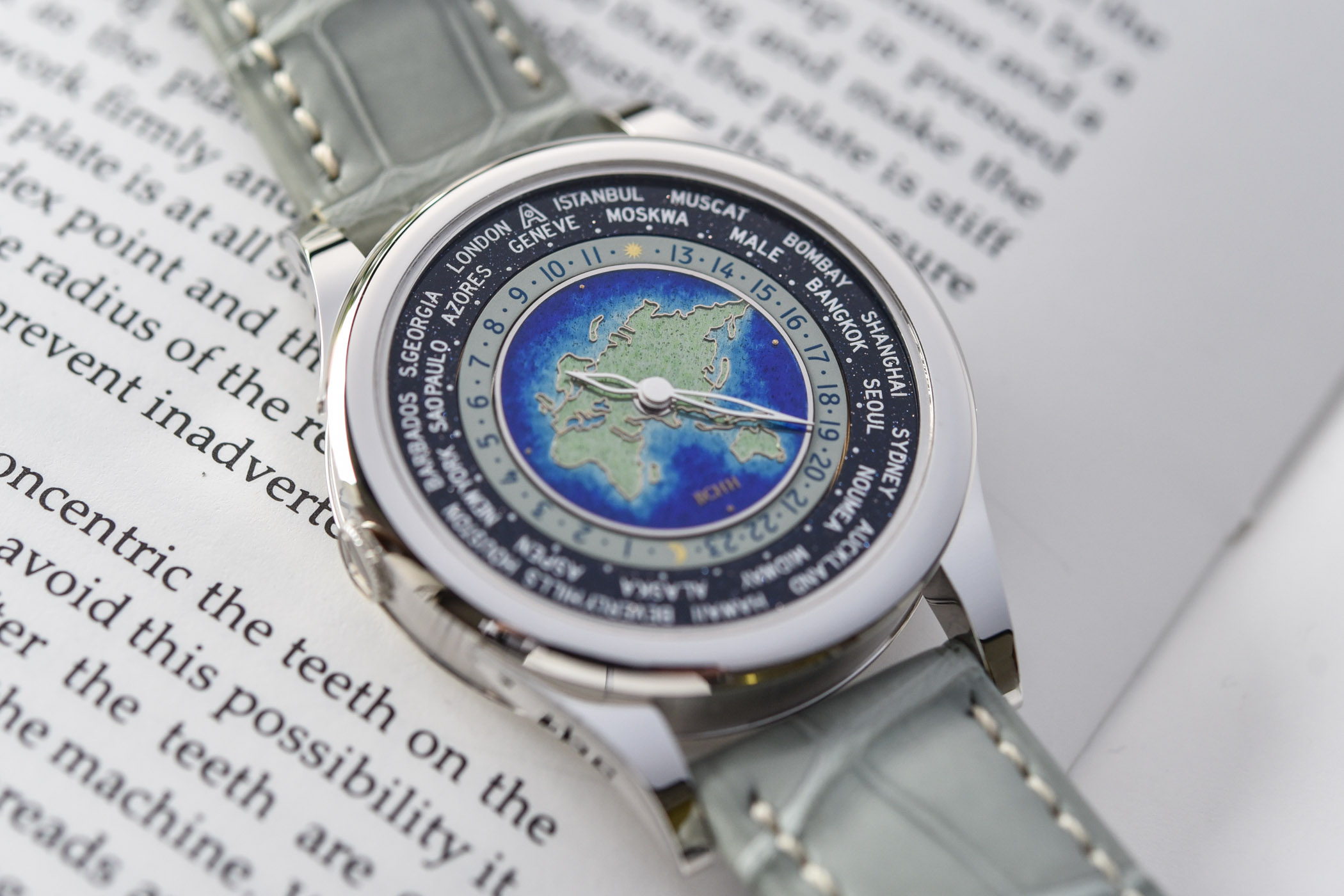 The most important element of this BCHH Celestial Voyager is its multi-part, complex and traditionally executed dial. If the layout is typical of Cottier’s and Andersen’s production, the materials have been carefully chosen and the result is extremely impressive. The city ring, positioned on the periphery, is made of aventurine with shining gold particles (said to be the first-ever use of aventurine on a world time watch). Then comes the 24-hour ring, which is more restrained and silver coloured to enhance the contrast. 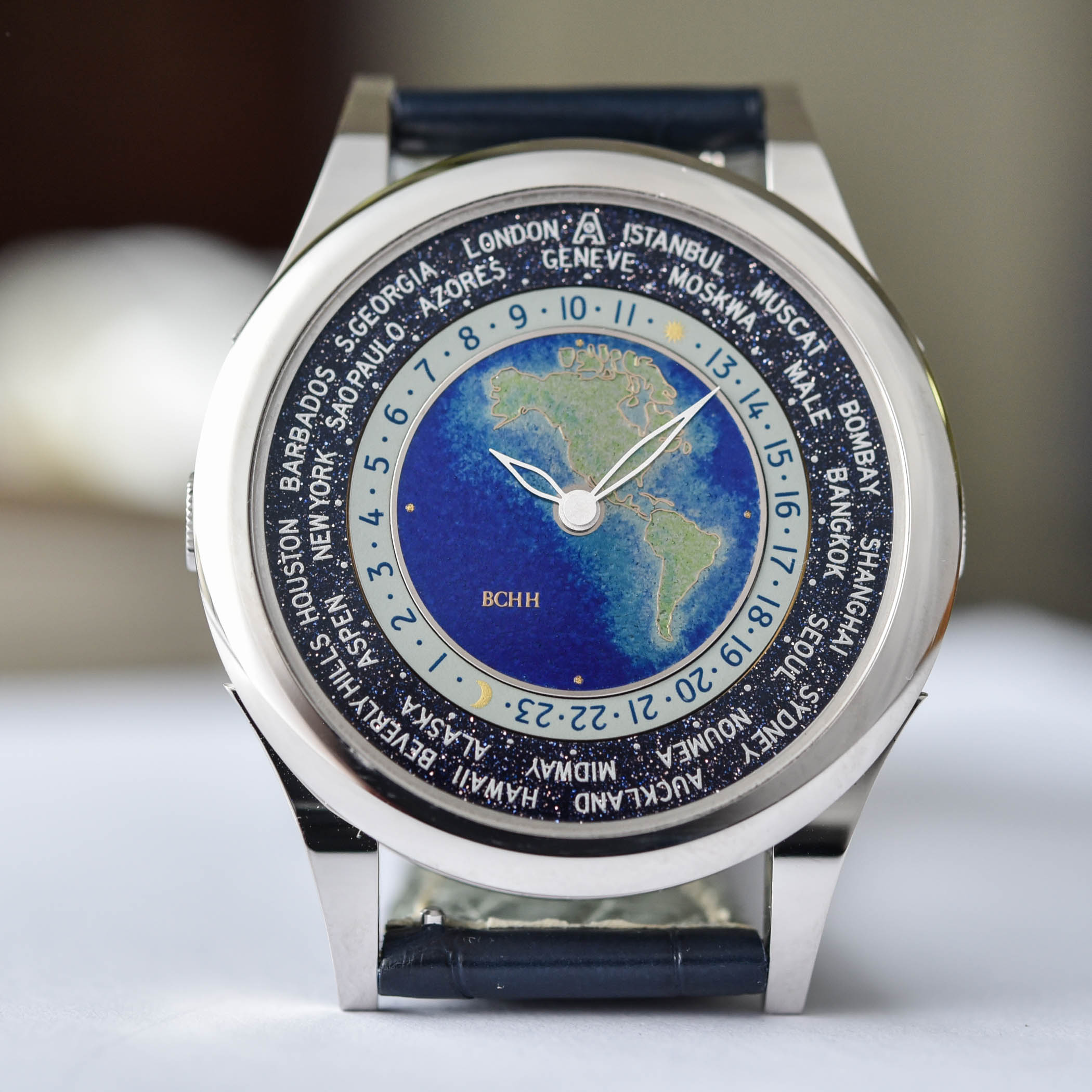 The central part of the dial depicts a map – and each of the seven watches will have different maps (for instance, here you can see one with Americas and two with Europe, Asia, Africa and Oceania, yet in different colours). Despite measuring only 18mm in diameter, this map is highly detailed and shows impeccable execution. It is made by a dial specialist in La Chaux-de-Fonds using the cloisonné enamel technique. Starting from a solid gold base, the dialmaker then creates the contours of the map using a thin gold wire (creating so-called cloisons or compartments). The different sections are then filled with coloured enamel with small brushes, and fired in an oven over 20 times. The result, playing on tones of blue and green, is spectacular but also restrained and elegant. 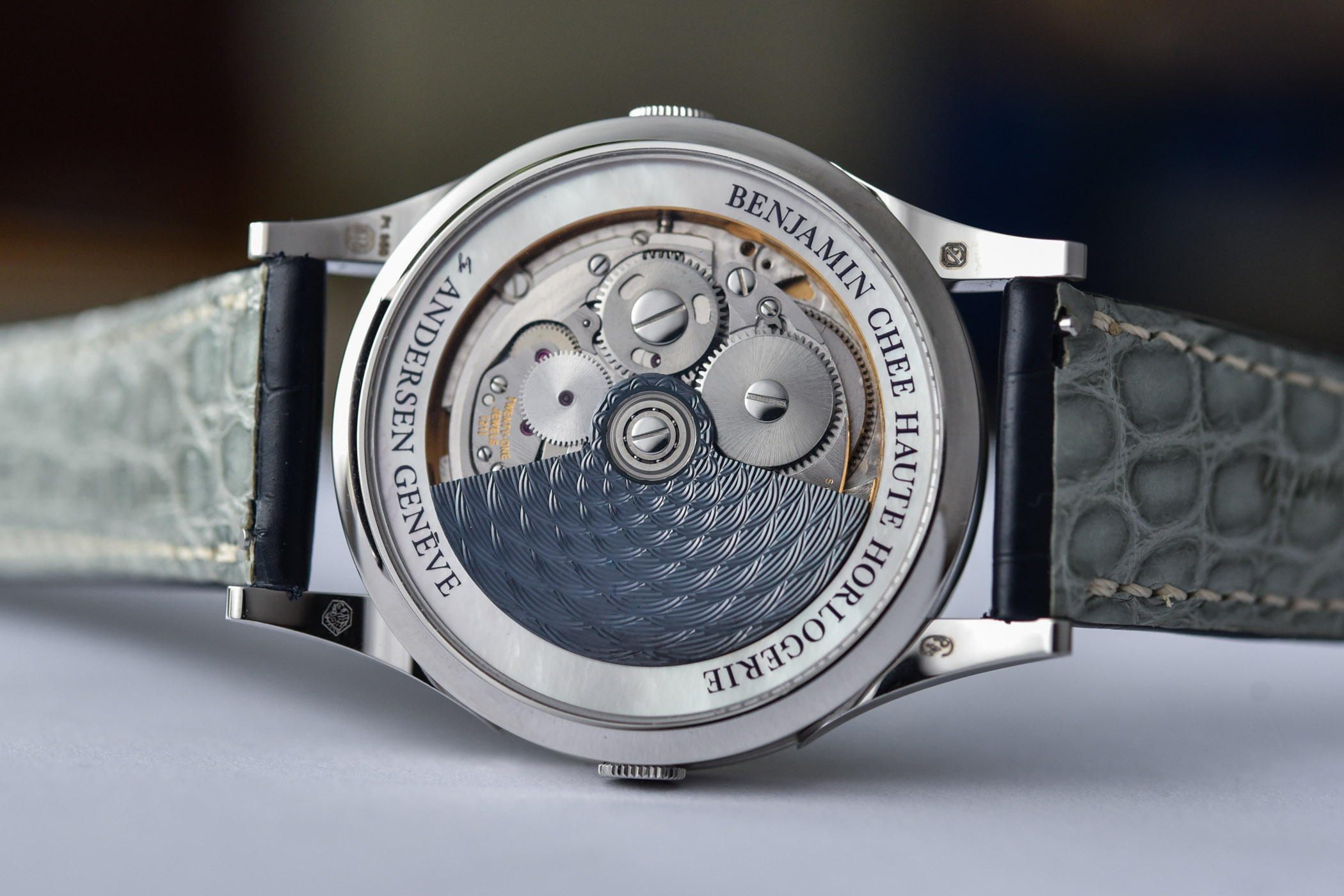 Powering the BCHH Celestial Voyager is a vintage movement entirely restored and decorated by Andersen Genève, then fitted with an in-house manufactured world time module. The base movement is a calibre AS 1876, sourced from a company named A. Schild S.A. and active until the 1970s. The automatic movement, running at 3Hz and boasting 40 hours of power reserve, is extensively decorated by hand, including anglage, Geneva stripes, hand-chamfered and mirror-polished on the ratchet and crown wheels, snailing and circular-graining on all wheels and polished screw heads. Also, and typical of Andersen’s production, the watch is wound by a “BlueGold” rotor – where gold is heated in an oven and gradually turns blue. It reveals a beautiful guilloché pattern, here presented with a scale motif. The movement is surrounded by a mother-of-pearl caseback ring, with the names of the parties involved in the project.

The BCHH Celestial Voyager will be produced in only seven examples. Almost all aspects of the watch can be customised, so no two watches will be identical. For instance, the future owner can choose the names on the city ring, the image/map on the cloisonné enamel plate or the guilloché pattern applied to the gold rotor. 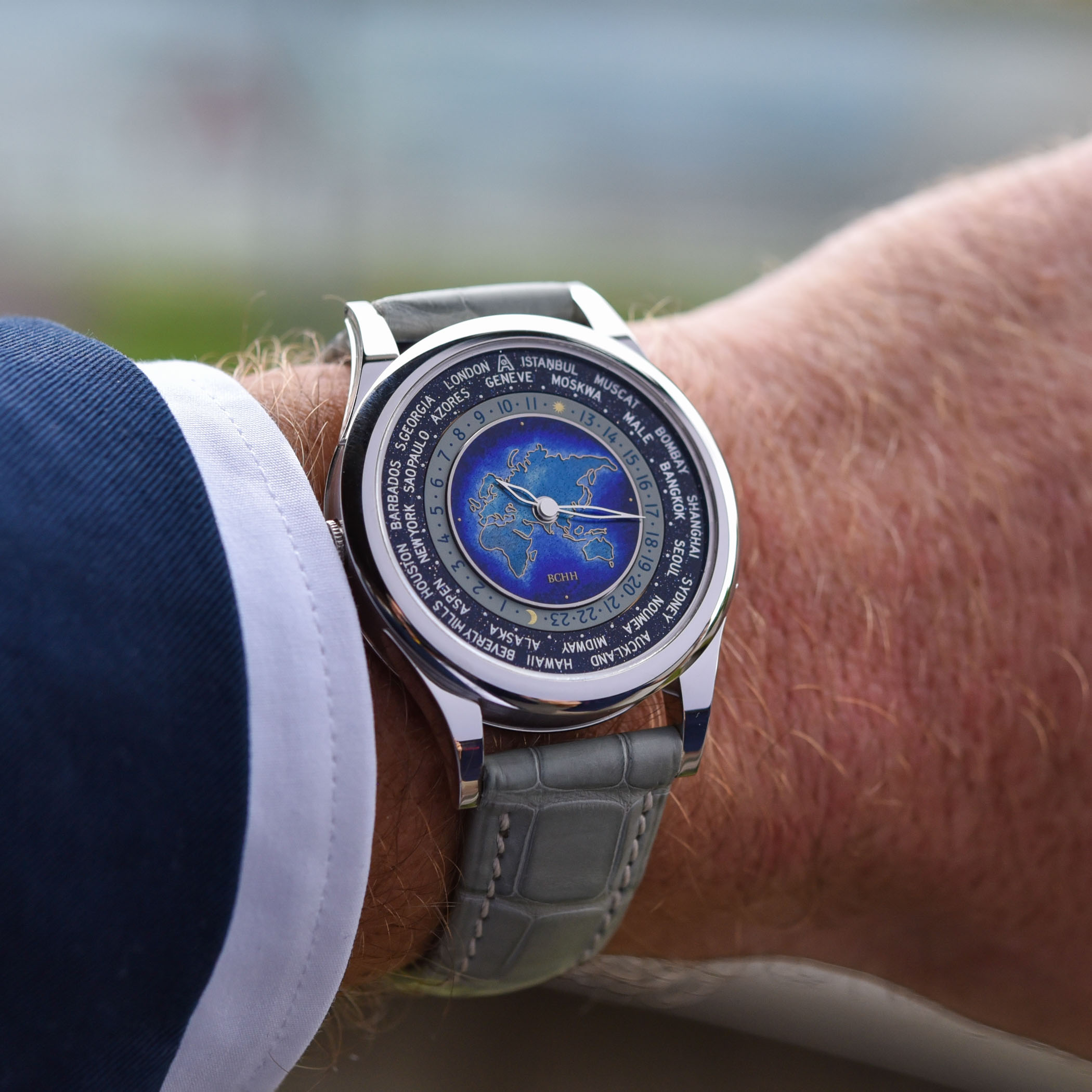 The price will depend on the customisation options, but the Celestial Voyager will start at CHF 48,800 (excl. taxes). It can be ordered directly from bchh.ch.