Audemars Piguet expands its Frosted Royal Oak collection with a new 34mm model shimmering with its hammered white gold case and refreshing light blue dial. Five years ago, Audemars Piguet released a frosted gold version of the iconic Royal Oak; not the iconic Royal Oak designed by Gérald Genta in 1972, but an equally iconic Royal Oak revisited by Jacqueline Dimier in 1976 for women. To celebrate the 40th anniversary of the women’s version in 2016, the Royal Oak – in 33mm (quartz) and 37mm (mechanical self-winding) – was dressed for the occasion with a glistening hammered gold case created with Florentine jewellery designer Carolina Bucci. Although the idea of taking a hammer to a watch might make your hair stand on end, Carolina Bucci is a fourth-generation jeweller from the Florentine Bucci jewellery dynasty and dominates the gold hammering technique. Using a diamond-tipped tool to create tiny indentations in the metal, the result produces a discreet sparkle that is never flashy.  The glistening textured frosty surface that looks like the watch has just been taken out of the freezer is not only beautiful, but it is also extremely hard wearing and resilient to scratches. 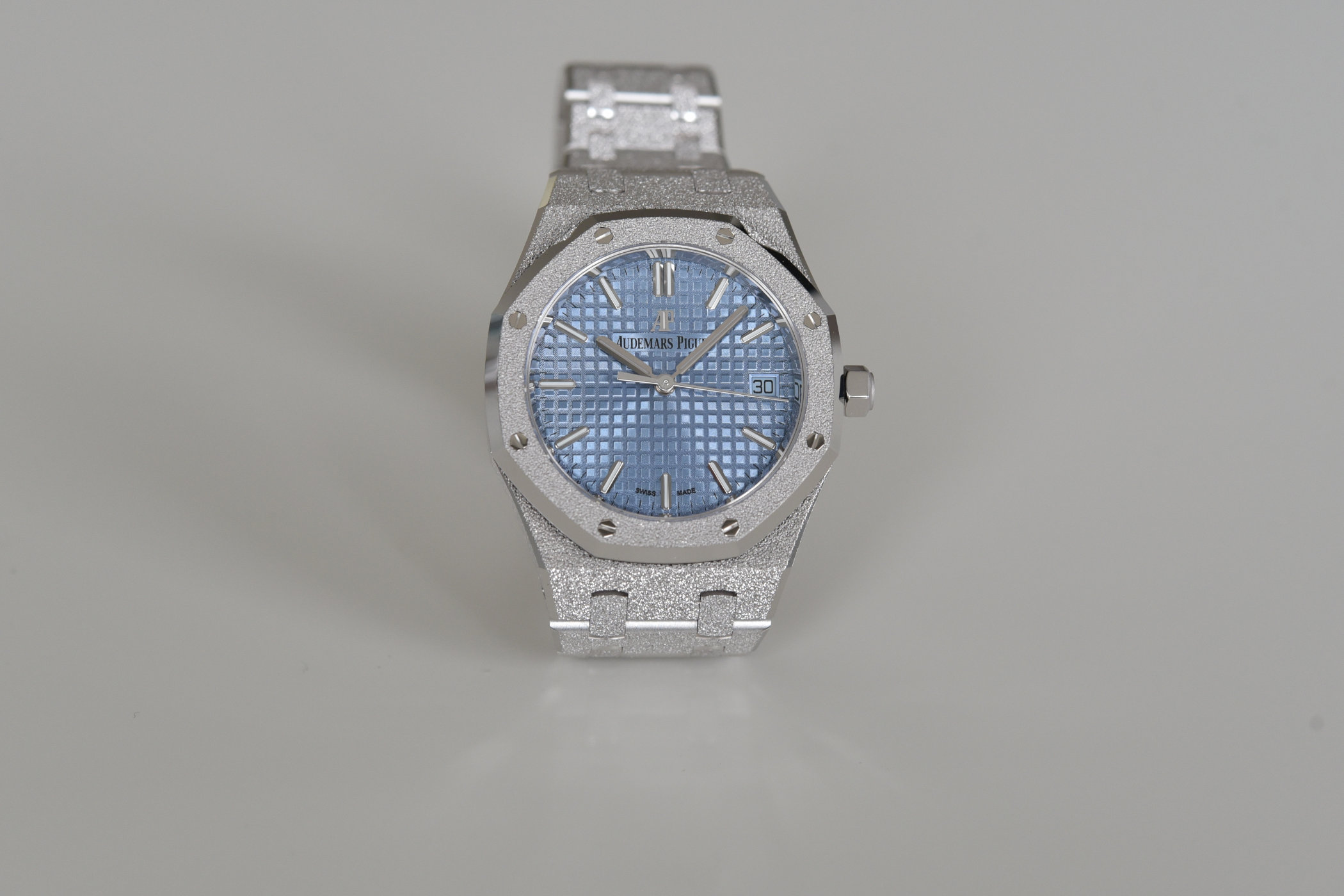 As all our readers know, Gérald Genta’s 1972 steel Royal Oak watch – with its commanding octagonal bezel, integrated bracelet, exposed screws, tapisserie dial and slightly industrial vibe – shocked the watch world. The precursor of the luxury sports watch genre, the Royal Oak was originally touted as a watch with a “body of steel and a heart of gold”. Although it was not the first sports watch on the market – Rolex had been providing beefy tool watches for decades – the Royal Oak was the first luxury sports watch on the market. A bold statement that defied the prevailing belief that it was the metal of a watch that determined its worth, the Royal Oak proved that it was not the metal but the design and mettle of the movement that made the difference. 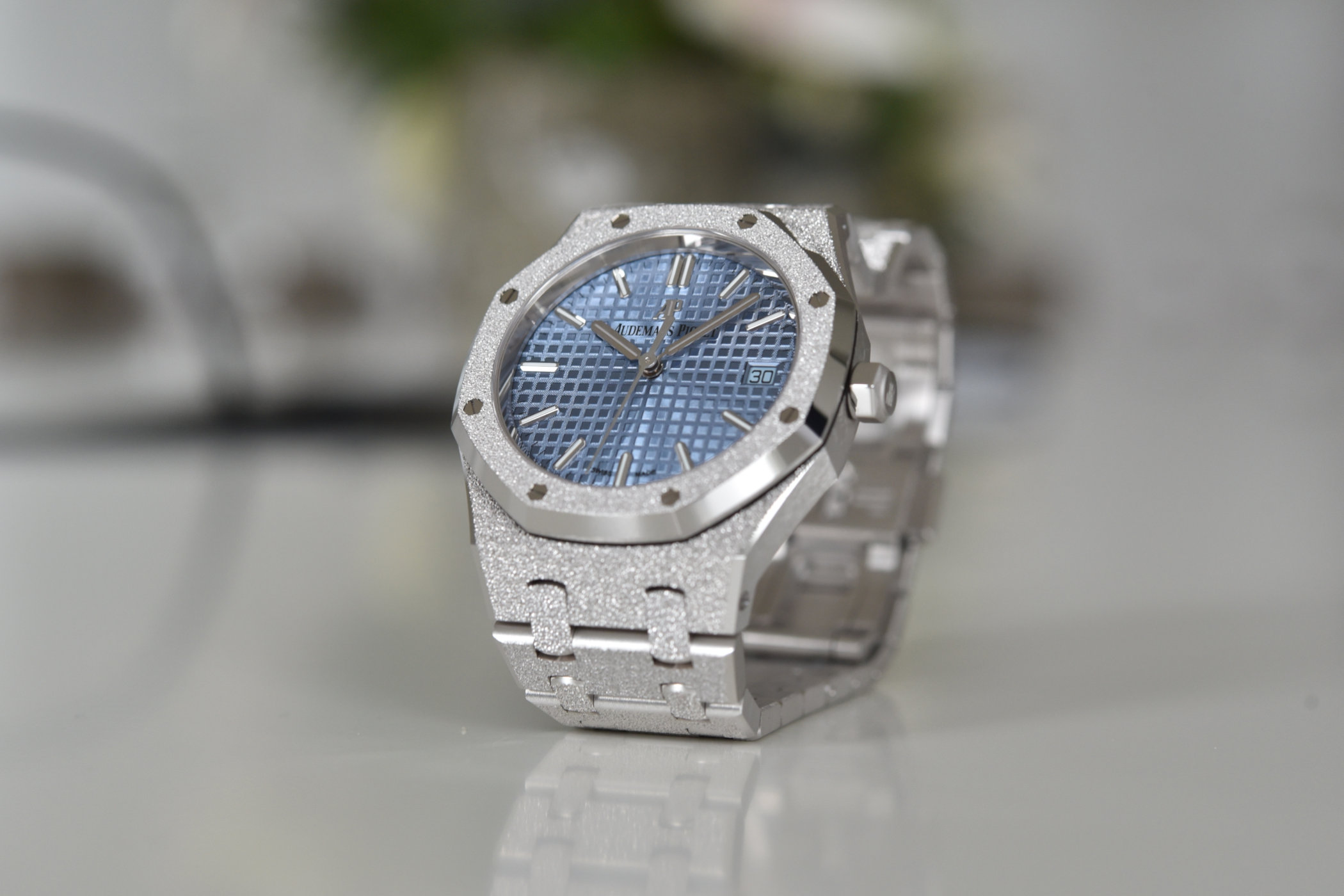 The incorporation of a hammered bracelet and case in 2016 was, like all things related to the Royal Oak, audacious but immediately won over the hearts of RO fans of both sexes. The Frosted Royal Oak was a hit, and since its introduction in 2016, it has been released in Double Balance Wheel openworked 41mm and 37mm gold models, in a risqué 41mm white gold chronograph with purple dial and in a less flamboyant white gold and dark silver dial fitted with a new-generation automatic flyback movement designed for the Code 11.59 collection.

This year, Audemars Piguet expands its Frosted collection with a new 34mm white gold model with a gorgeous light blue dial. Although this watch marks the debut of the Frosted RO 34mm model, the ‘normal’ 34mm RO appeared last year with an outsourced ultra-slim automatic movement in a black ceramic case or a choice of steel and pink gold models. All the 34mm models share the same case size and height and have a water-resistance of 50 metres. 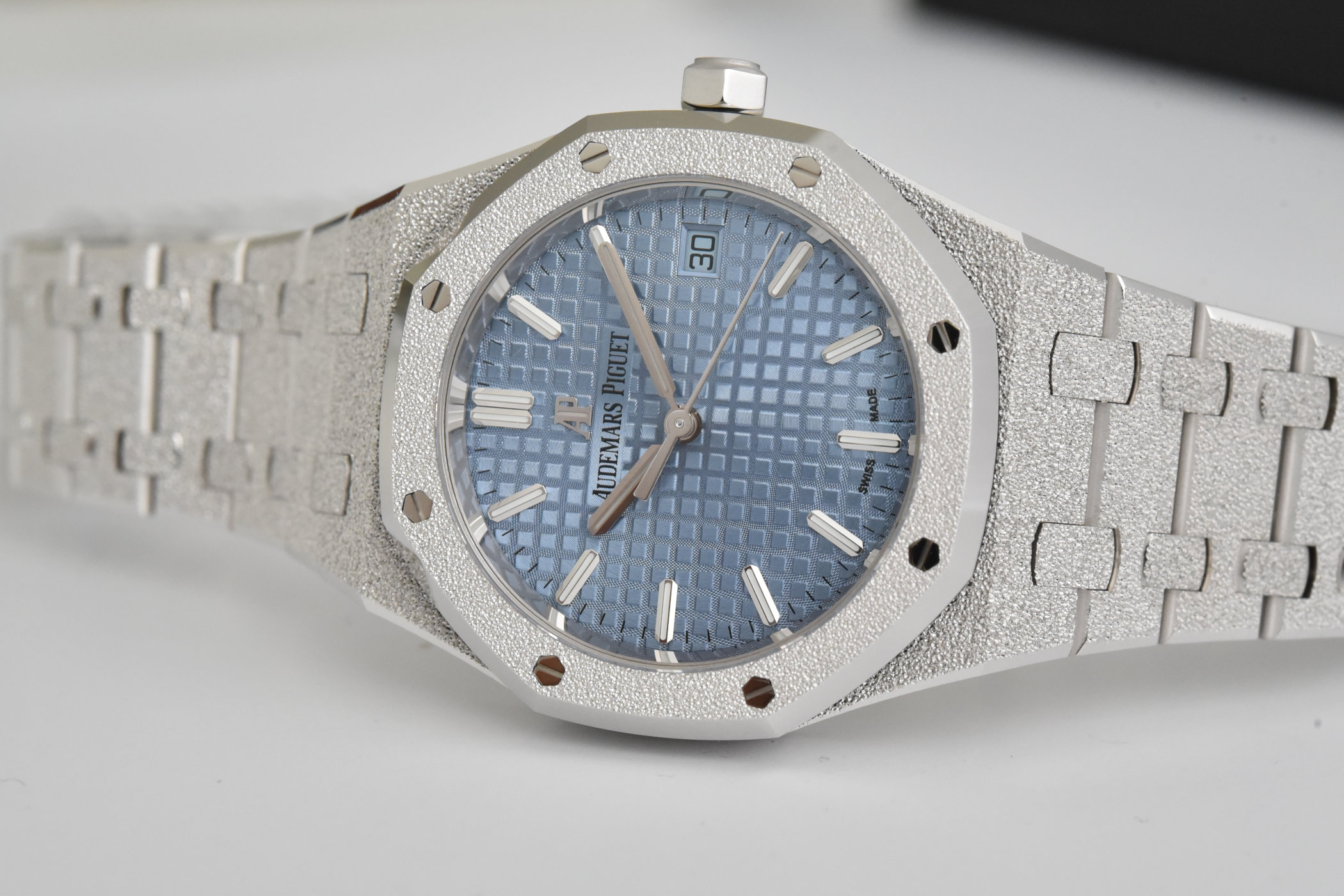 The latest Royal Oak Frosted Gold automatic comes in a 34mm white gold case with an ultra-slim height of just 8.8mm. The shimmering hammered surfaces (case and integrated bracelet) that evoke the texture of diamond dust contrast with the polished octagonal bevel of the bezel, the eight screws on the bezel, the crown and the exterior flanks of the middle case and links composing the integrated bracelet. 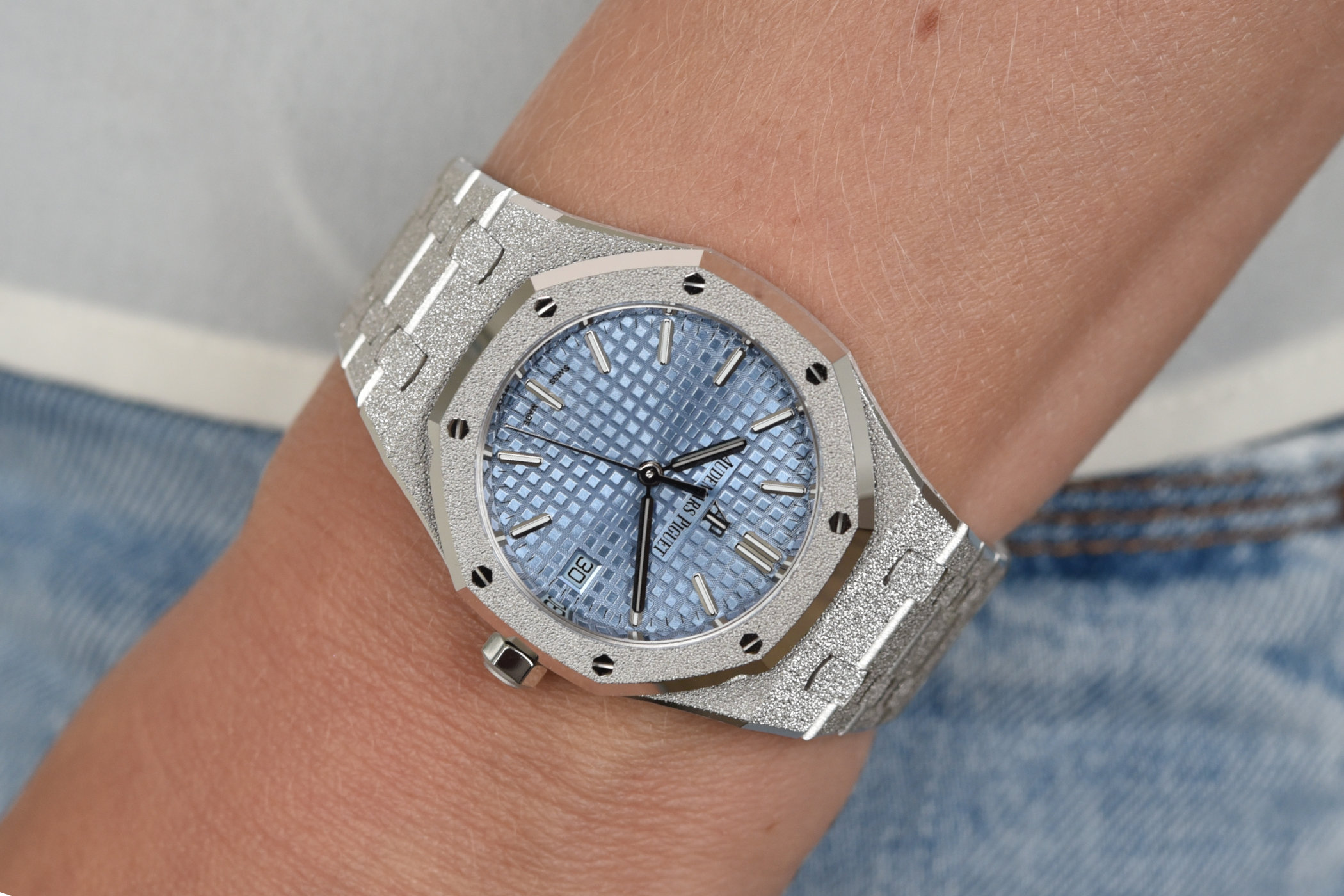 The combination of the light blue PVD-coated ‘Grande Tapisserie’ pattern dial with the frosted gold elements of the case and the applied white gold hour markers is extremely attractive. If you look closely, you will notice that the area beneath the raised cushions on the Grand Tapisserie (waffle) pattern are also slightly granulated and match the surface area of the hammered gold case. Like all other Royal Oak models with date windows, the background matches the dial colour to make it as unobtrusive as possible. In this case, the background of the date is light blue, and the numbers are black. Again, the applied white gold hour markers and hands are filled with a strip of luminescent coating. 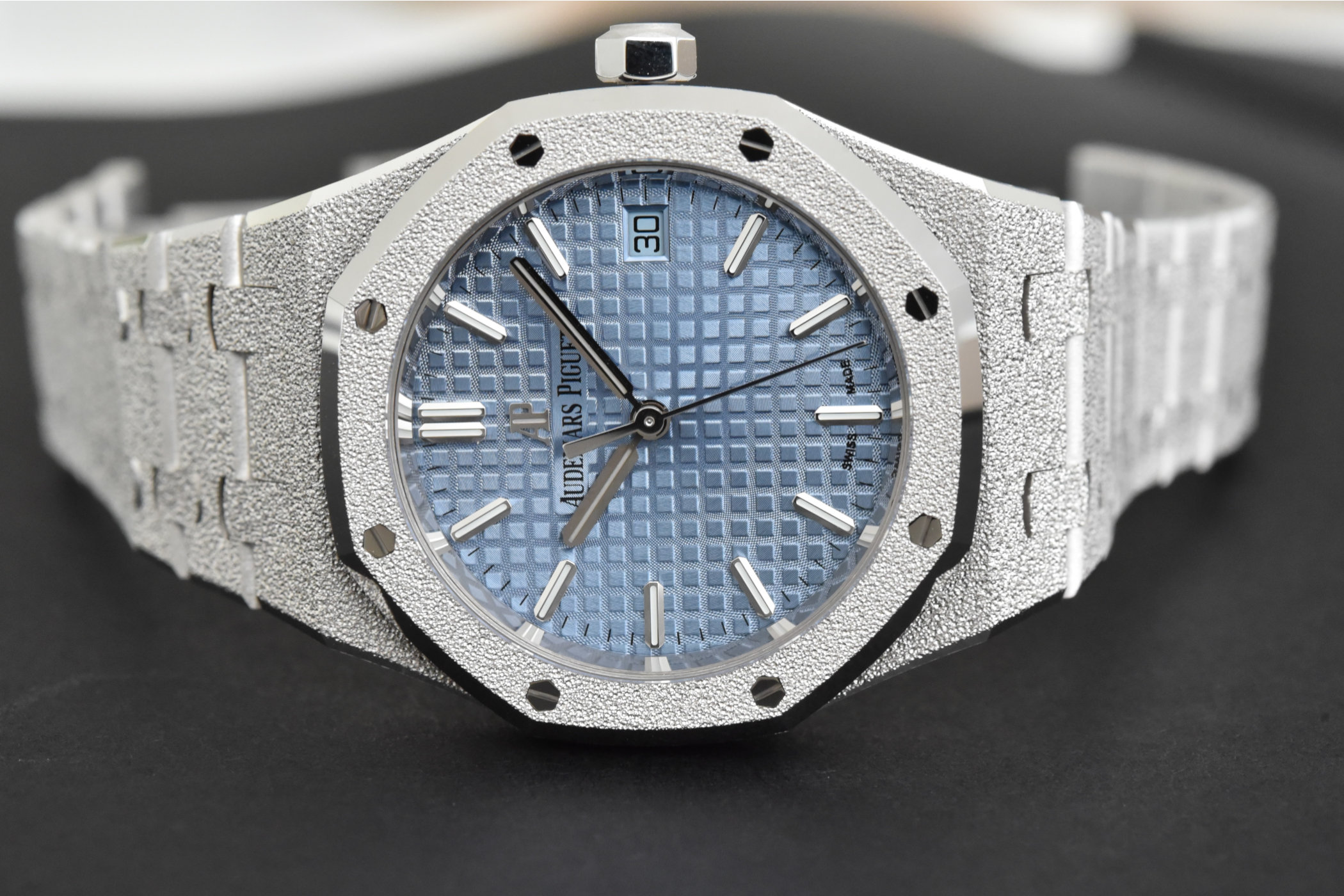 Visible through the sapphire crystal caseback is AP’s automatic calibre 5800. An oddity at AP, the calibre 5800 is not produced in-house but by Vaucher, a movement producer renowned for its high-end calibres. This slim automatic movement (23.3mm x 3.9mm) was the natural choice for the 34mm Royal Oak since the calibre 3120 would have been too large. Beating at 28,800vph, the calibre 5800 also offers a respectable 50-hour power reserve. The bridges are decorated with Côtes de Genève stripes. The rotor was specifically developed for this 34mm version in rose gold with a frosted central area, brushed surfaces and polished bevels. 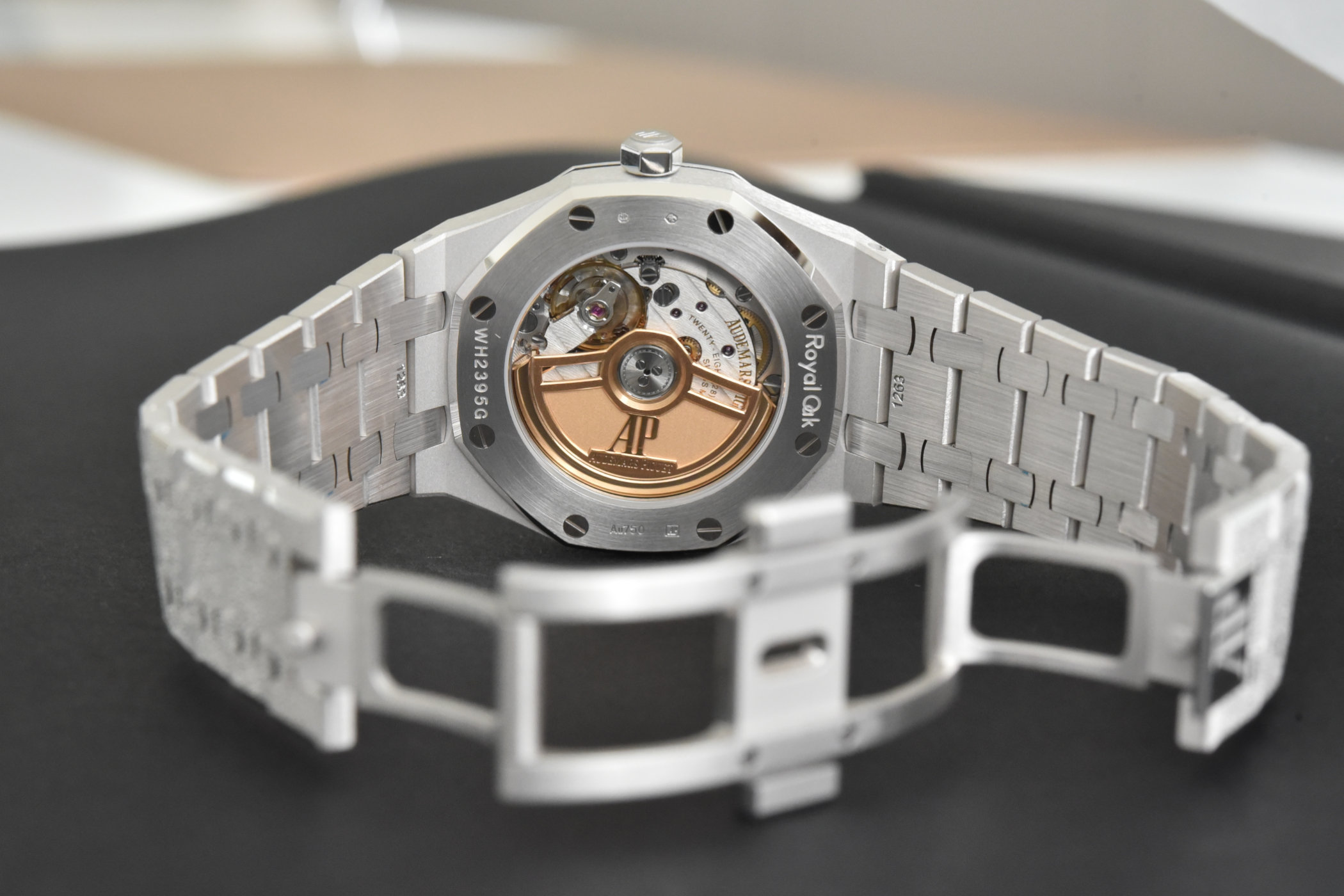