Bangalore Watch Company is a rather surprising brand for several reasons. A young company founded in 2018 by husband and wife team Nirupesh Joshi and Mercy Amalraj, it is one of the rare representatives of the Indian watchmaking scene. Yet, since its inception, the brand has proven to be creative and successful in bringing cool sporty designs infused with a subtle Indian flair. Following a series of pilot’s watches, the MACH 1 series, and a watch inspired by the country’s most popular sport (cricket), the Bangalore Watch Company Cover Drive, BWC is back with yet another model. And with this Bangalore Watch Company Apogee Collection, the brand pays tribute to five decades of Indian space exploration. 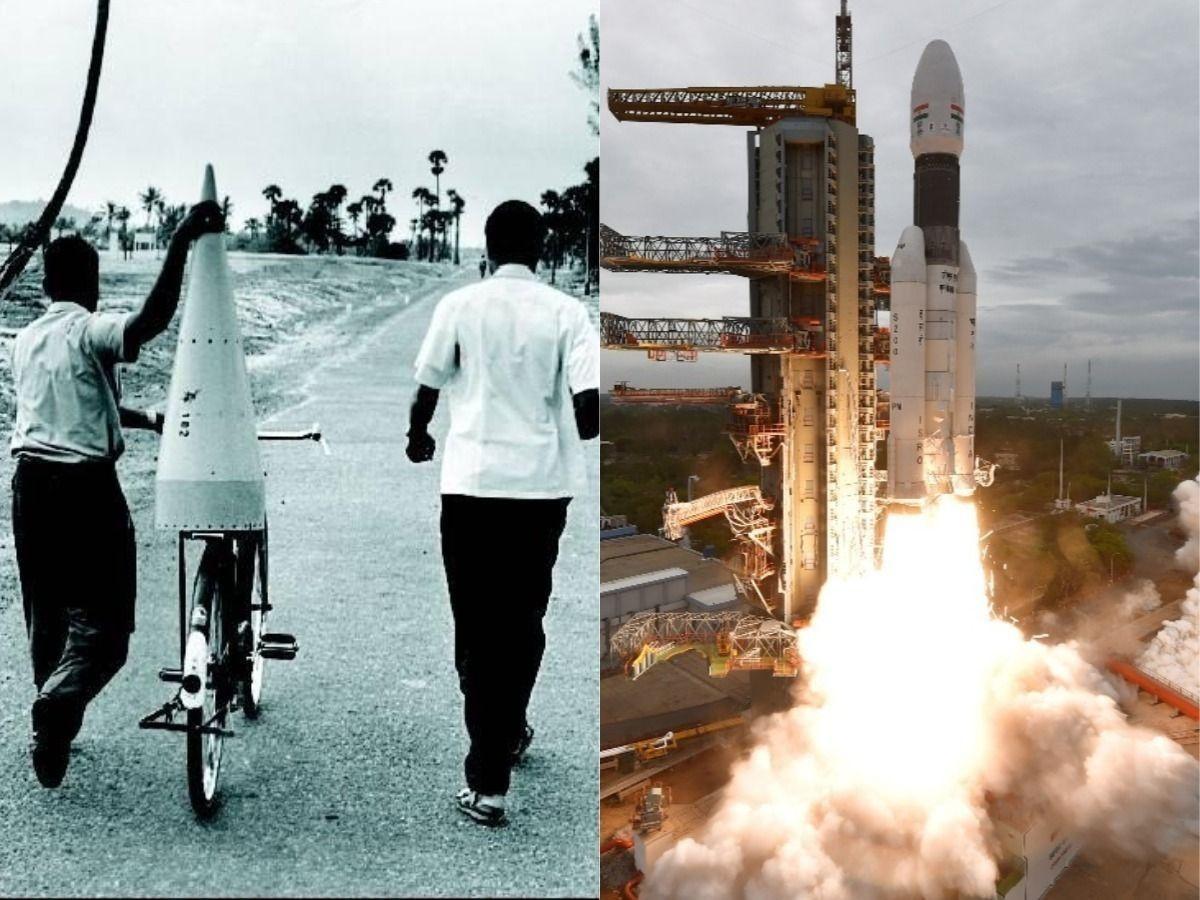 While early stages of space exploration are often associated with the USA and USSR (for obvious reasons, given the insane budgets injected in research by both parties), there were, of course, more governments involved in this race. And India was one of them, yet with a slightly more understated approach, to say the least. Bullock carts and bicycles might have transported the foundations of the Indian space programme, and the programme launched in the harsh economic climate of the late 1960s, but the country’s ambitions were huge. Eventually, India joined the Soviet Interkosmos programme for space cooperation and got its first satellite – Aryabhatta – in orbit on board a Soviet rocket in 1975. And then things went fast. From firing rockets from a fishing village on the west coast of India to sending rockets to Mars from Sriharikota on the east coast of India, the Indian space programme has grown dramatically to the point where India is now part of a handful of spacefaring nations in the world with its ISRO (Indian Space Research Organisation), something that has become a great source of inspiration for over a billion people, and also for Bangalore Watch Company. 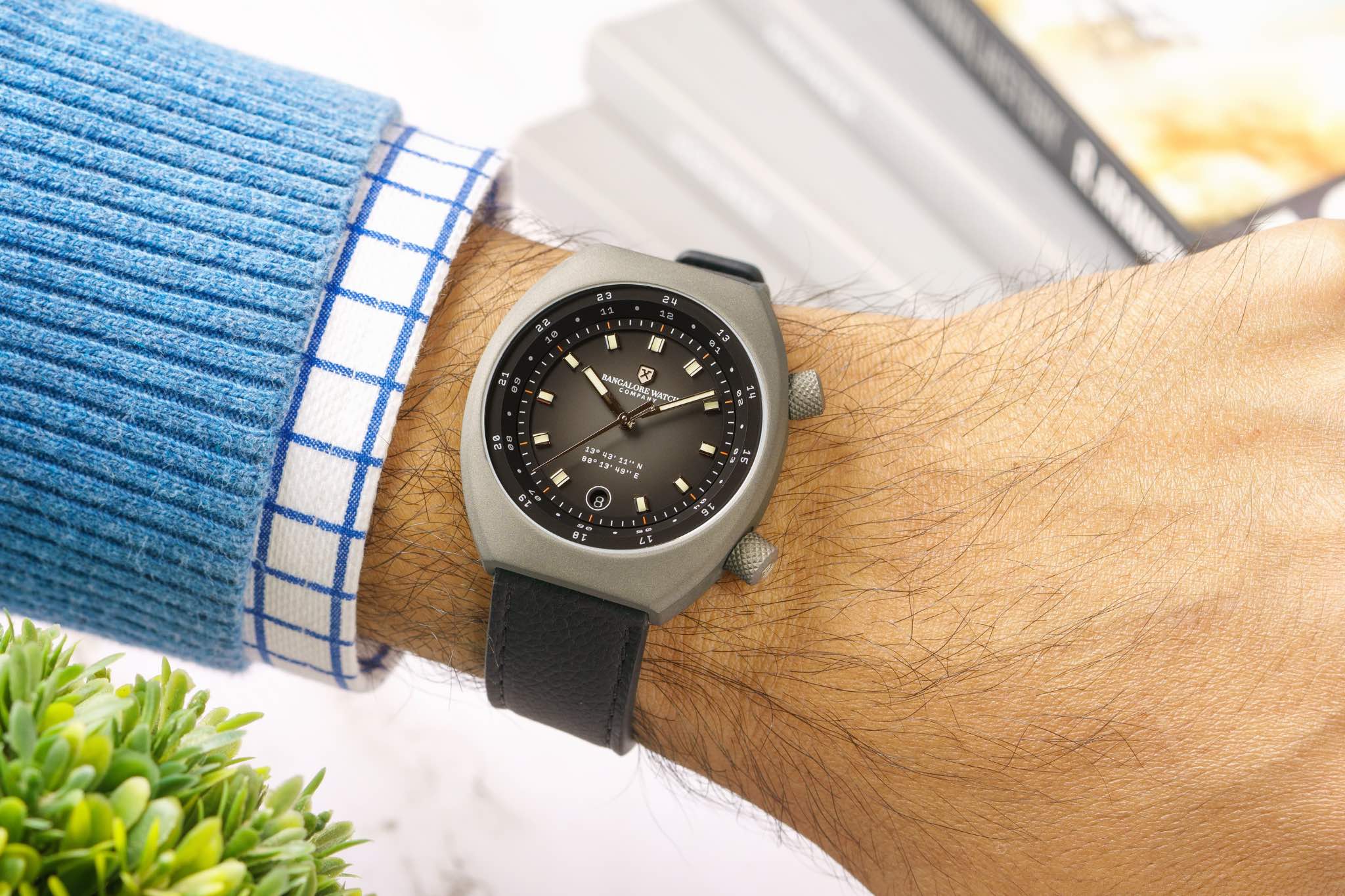 Given that ISRO started to be active in the late 1960s and early 1970s, Bangalore Watch Co. has taken inspiration from this era to create a new watch that pays tribute to Indian space exploration, using typical space-related watch cues, yet with its own unique flair. Named Apogee, the farthest point of a satellite’s orbit, this new collection continues the brand’s idea of instrumental, sporty watches infused with Indian-related elements. 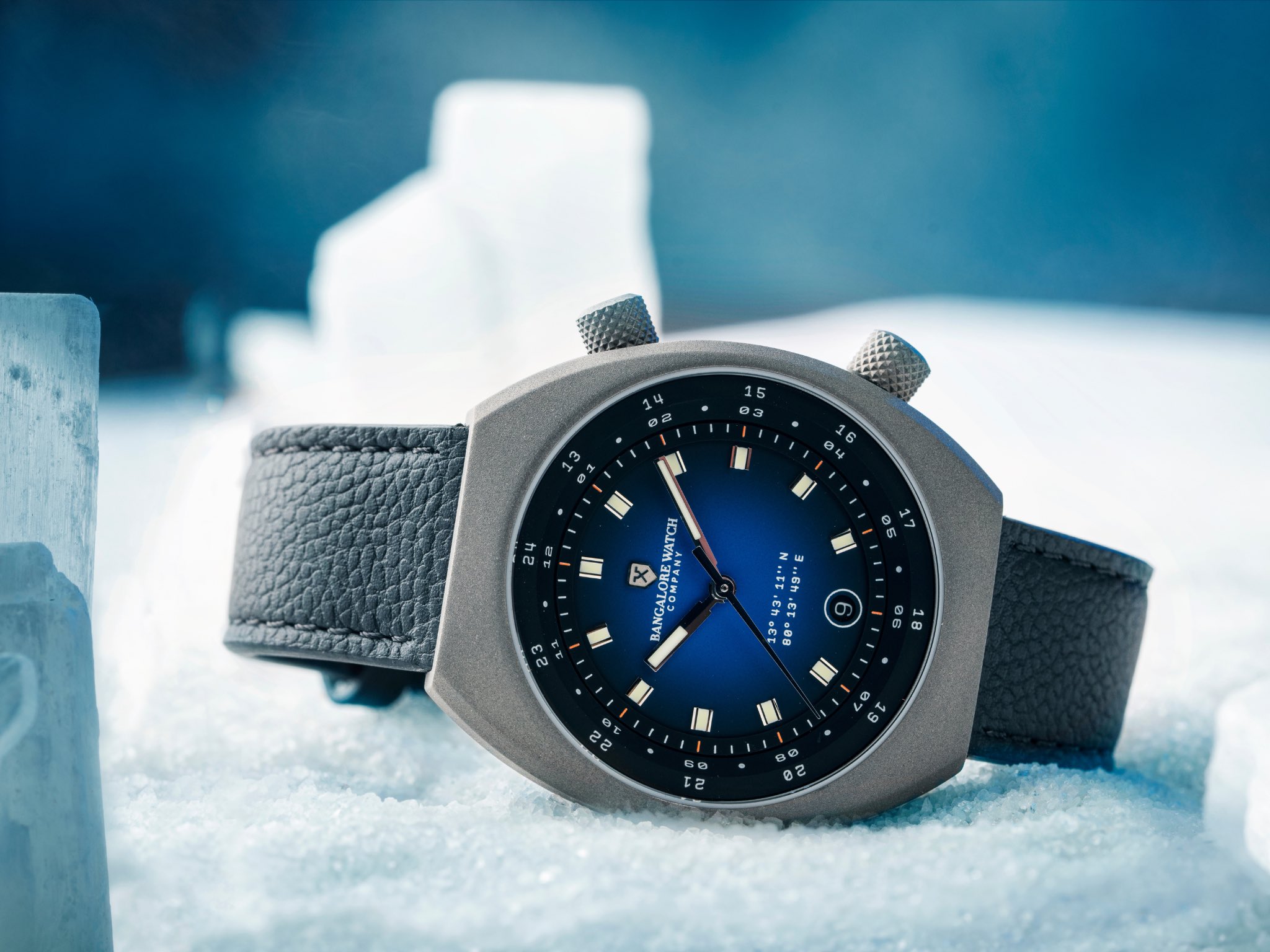 The four watches that compose the Bangalore Watch Company Apogee Collection share the same case and overall design, starting with an industrial-looking case of 40mm in diameter, 11mm in height and 44mm lug-to-lug. The shape and case construction, named Unibody by the brand (since it only has two parts, one for the entire case, one for the caseback), is reminiscent of the late 1960s and early 1970s so-called “helmet” watches that have been highly popular with pilots. The case is entirely executed in grade 2 titanium with a micro bead-blasted finishing, giving it a matte and dark grey surface. The BWC Apogee is also a two-crown watch, with one in charge of the movement and the other actuating the internal rotating bezel used to display a second time zone. A sapphire crystal tops the watch with AR coating and the screwed caseback, engraved with a space-inspired image, guarantees 100m water-resistance.

All four models available in this new Bangalore Watch Company Apogee Collection share the same basic elements. The periphery of the dial, black on all versions, displays an additional time zone, thanks to the rotating bezel. The central part of the dial features diamond-cut, and rhodium-plated square applied markers and rectangular hands, all filled with luminous material. The display is classic, with three hands for the time and a circular date window at 6 o’clock. Just above it is a latitude-longitude position corresponding to Sriharikota, ISRO’s current site for all satellite launch vehicles.

The Bangalore Watch Company Apogee Collection is actually more of a 3+1 collection. Indeed, the first three models are rather classic with a twist and only differ in colour. All three have a gradient effect, with the central part of the dial available in blue (Horizon model), green (Supernova model) or dark grey (Deepspace model). A fourth model is also available with material straight from outer space in the form of a meteorite dial. This “Extraterrestrial” model displays a light grey meteorite dial with typical geometric patterns, sourced from the Muonionalusta meteorite – classified as fine octahedrite, which impacted in northern Scandinavia, west of the border between Sweden and Finland, about one million years BCE. This version is limited to 50 pieces. 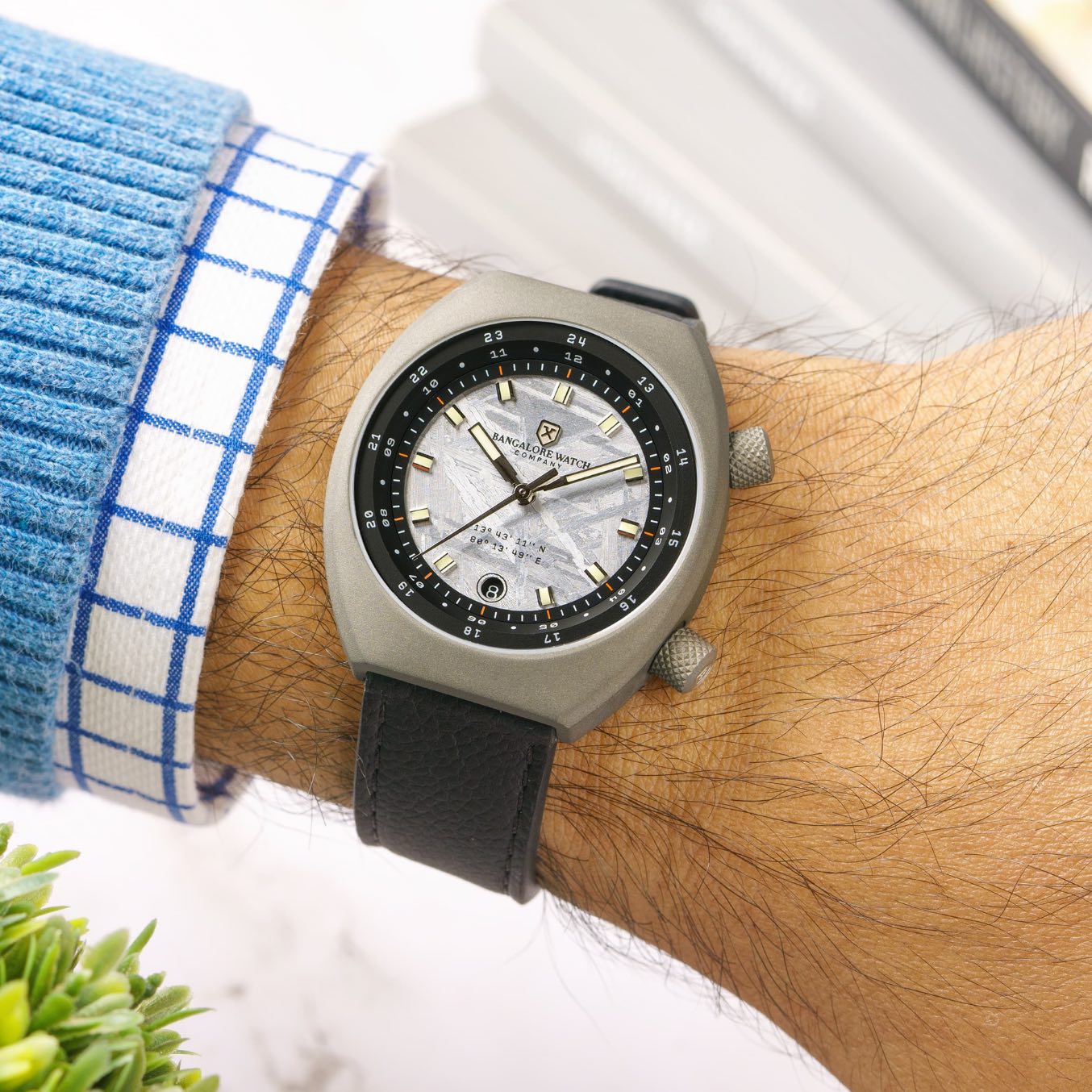 Inside the case of all models is a classic, tried-and-tested movement, the automatic Swiss Sellita SW 200-1 (an alternative to the ETA 2824). This movement beats at 4Hz and stores 38 hours of power reserve. The Bangalore Watch Company Apogee watches are worn on a black leather strap, closed by a titanium pin buckle with the same micro bead-blasted pattern as the case.

The three gradient versions of the Bangalore Watch Company Apogee Collection will be available for pre-order at www.bangalorewatchco.in starting 15 August 2021 at 5 PM India time, with prices starting at USD 925. The Extraterrestrial model with its meteorite dial will be limited to 50 pieces, with an approximate retail price of USD 2,200. It will be also available for pre-order at www.bangalorewatchco.in on 15 August 2021.