Bovet presents a surprisingly contemporary and sporty take on its magnificent Virtuoso VIII Chapter Two. Still endowed with its impressive mechanical attributes – 10-day power reserve, big date and double-sided tourbillon – the latest rendition of the watch comes in titanium cases clad with black DLC and luminescent dials. When we say luminescent dials, we are not referring to indices or markings, but the entire dial surface glows in a host of eye-catching colours. Meet the Bovet 1822 Virtuoso VIII Chapter Two Reimagined for 2021.

The second chapter in the life of Bovet’s magnificent Virtuoso VIII collection was written in 2020 and unveiled during Geneva Watch Days. First released in 2017 to coincide with the brand’s 195th anniversary, the Virtuoso VIII paid homage to its name with an unabashed display of complications – a 10-day power reserve, big date and double-sided flying tourbillon – and ornate hand-decorated flourishes.

Revisited in 2020, the layout of the dial was somewhat altered with two aventurine glass sub-dials, and the decoration of the movement replaced the Fleurisanne engraving with circular Geneva stripes. If you want to find out the real story behind the genesis of Chapter Two, you can watch our video with Pascal Raffy who explains how a collector’s petition for a lighter and more restrained version of the watch resulted in the Virtuoso VIII Chapter Two.

The latest Virtuoso VIII Chapter Two Reimagined models have benefitted from the three-year collaboration with Rolls Royce and the technology that was developed during the creation of the bespoke Bovet Boat Tail watches. Although Bovet’s elaborate creations might seem light years away from the world of motor cars, the brand has consolidated several partnerships over the years. The partnership with Italian car design studio Pininfarina in 2007 resulted in the Pininfarina OttantaSei 10-Day Tourbillon. In a more recent collaboration, Bovet hooked up with luxury car manufacturer Rolls Royce to produce a pair of his and her watches to accompany the bespoke, coachbuilt Rolls Royce Boat Tail (worth GBP 20 million). As you would expect, the result was a fascinating blend of signature features of both hyper-luxury brands. With off-centred dials on both sides powered by a single movement, the front dial displays a Caleidolego wood marquetry dial to resemble the vertical grille of the Rolls Royce and a fuel gauge-style power reserve indicator. In the lower half of the dial is a hand-carved white gold Spirit of Ecstasy sculpture. The men’s model features an aventurine dial on the reverse side with a miniature hand-painted Rolls Royce car while the women’s model is decorated with floral motifs and the a miniature version of the Rolls Royce Boat Tail. Apart from the impressive decorative flourishes, the Amadeo convertible case was fitted a special mounting system to install the watch in the dashboard of the Rolls Royce!  Described by the brand as a “Rolls Royce trickle down” effect, the experience Bovet obtained in the creation of the watches for the Rolls Royce Boat Tail has influenced the technology inside these latest models. Working with Rolls Royce has resulted in engineering and production gains for Bovet that has been implemented across the board at the brand’s manufacture. For example, the bespoke timepieces for the Rolls Royce Boat Tail were exposed to vibrations, temperature fluctuations, humidity and even crash testing! 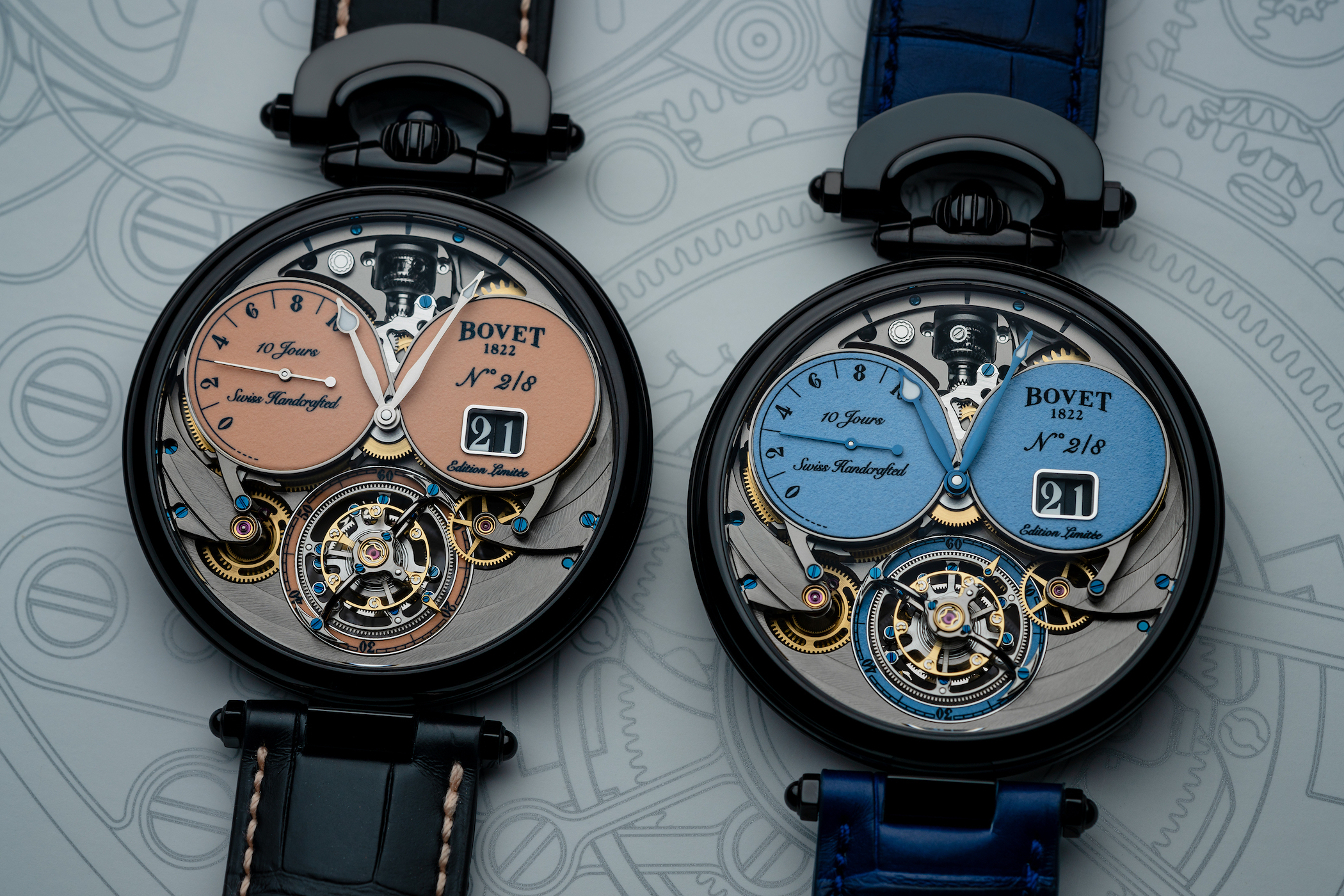 Like other members of the Virtuoso VIII Chapter Two family, the 44mm ‘writing slope’ case is inclined; it is thicker at the top and tapers towards the bottom, elevating the display for greater legibility. This year’s novelty is the use of brilliant black DLC-coated grade 5 titanium, resulting in a case that weighs just 64.7gm. Described as a combination of a Fleurier and Dimier case, the crown at 12 o’clock protected by the bow attachment is an ode to pocket watches. The sapphire cabochon in the crown is not merely decorative and functions as a rapid date corrector. 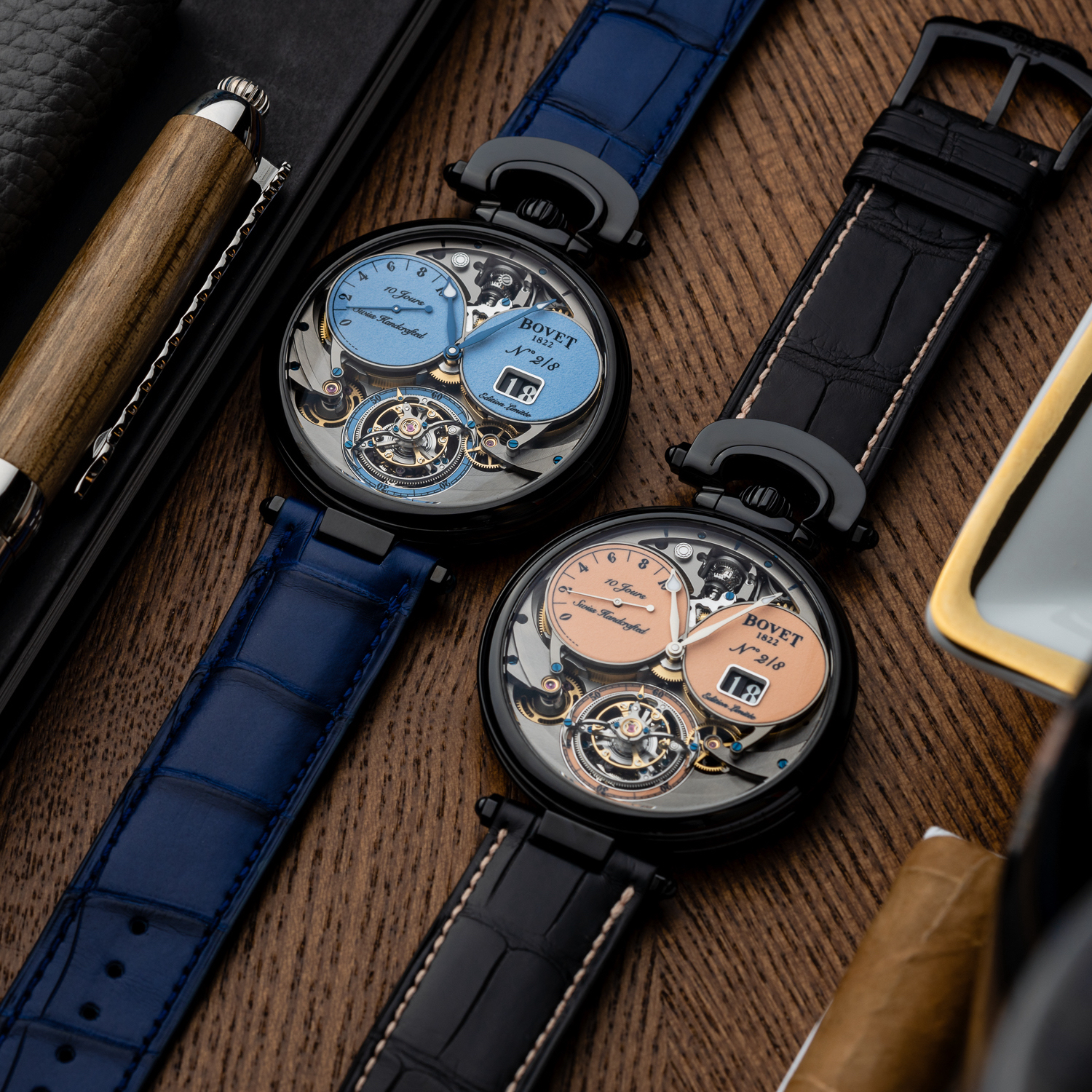 The symmetrical layout of the dial has not been altered and features two horizontal sub-dials in the upper half of the dial: the one of the left houses the power reserve indicator, the right dial is for the big date display. The lower half of the dial is dedicated to the double-sided tourbillon with seconds on the perimeter that can be admired from both sides of the watch. The patented differential winding system that reduces the number of crown turns to wind the spring fully is revealed in an aperture at noon. 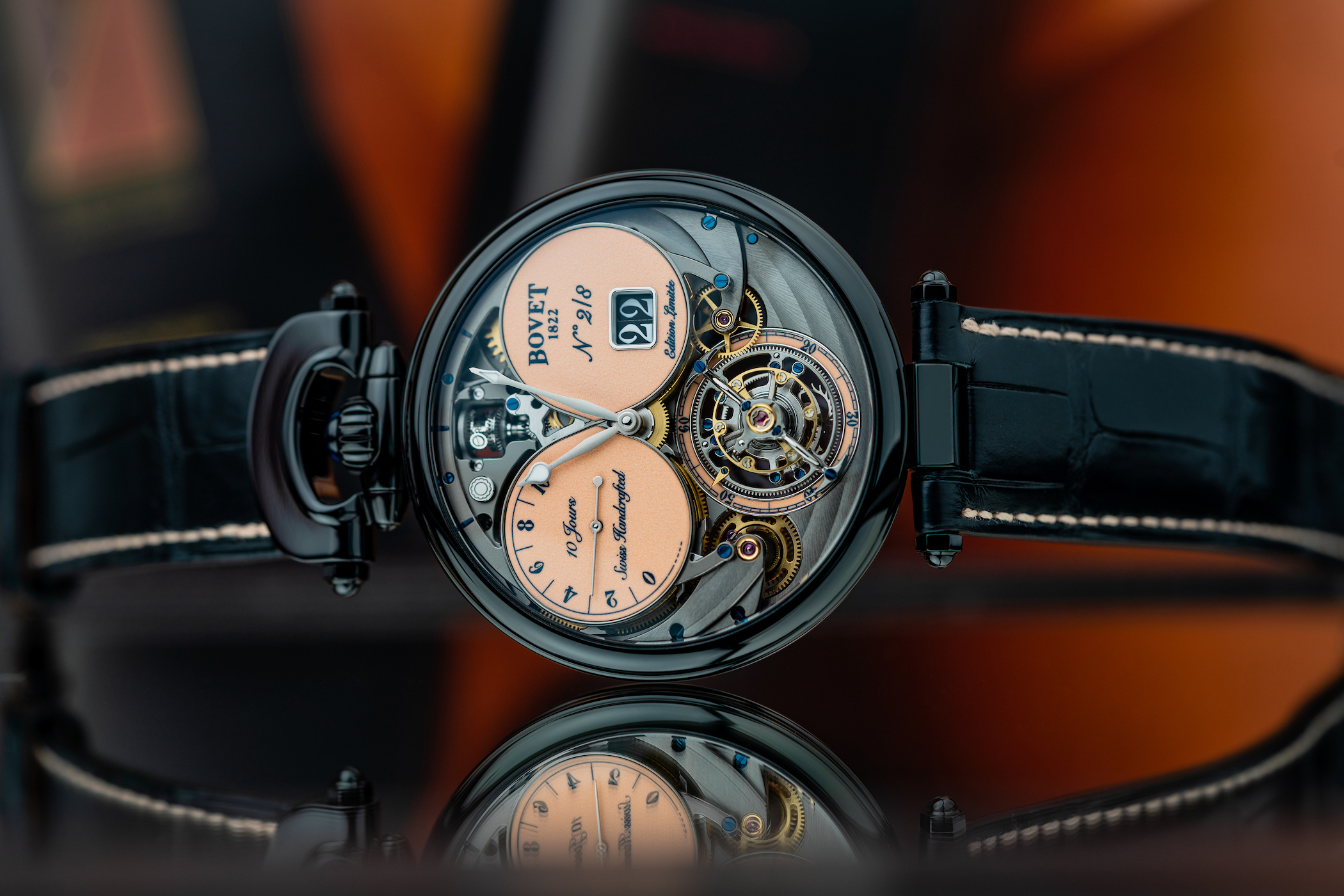 The contrast between the glossy black case and the vibrant colour palette of the Super-LumiNova dials is certainly dramatic. Available in yellow, blue, salmon, turquoise, green and violet tones of Super-LumiNova, the two sub-dials for the big date and power reserve indicator are covered almost entirely except for the large aperture for the big date. In addition, the ring for the seconds framing the flying tourbillon is also treated with Super-LumiNova, although the arrow indicating the seconds is not. What is striking, however, is that Bovet has not altered the classical style font used for the inscriptions and numerals of the dial creating an interesting mix of old and new. The hour and minute hands also have luminescent tips, but there are only three hour markers at 11, 12 and 1 o’clock. 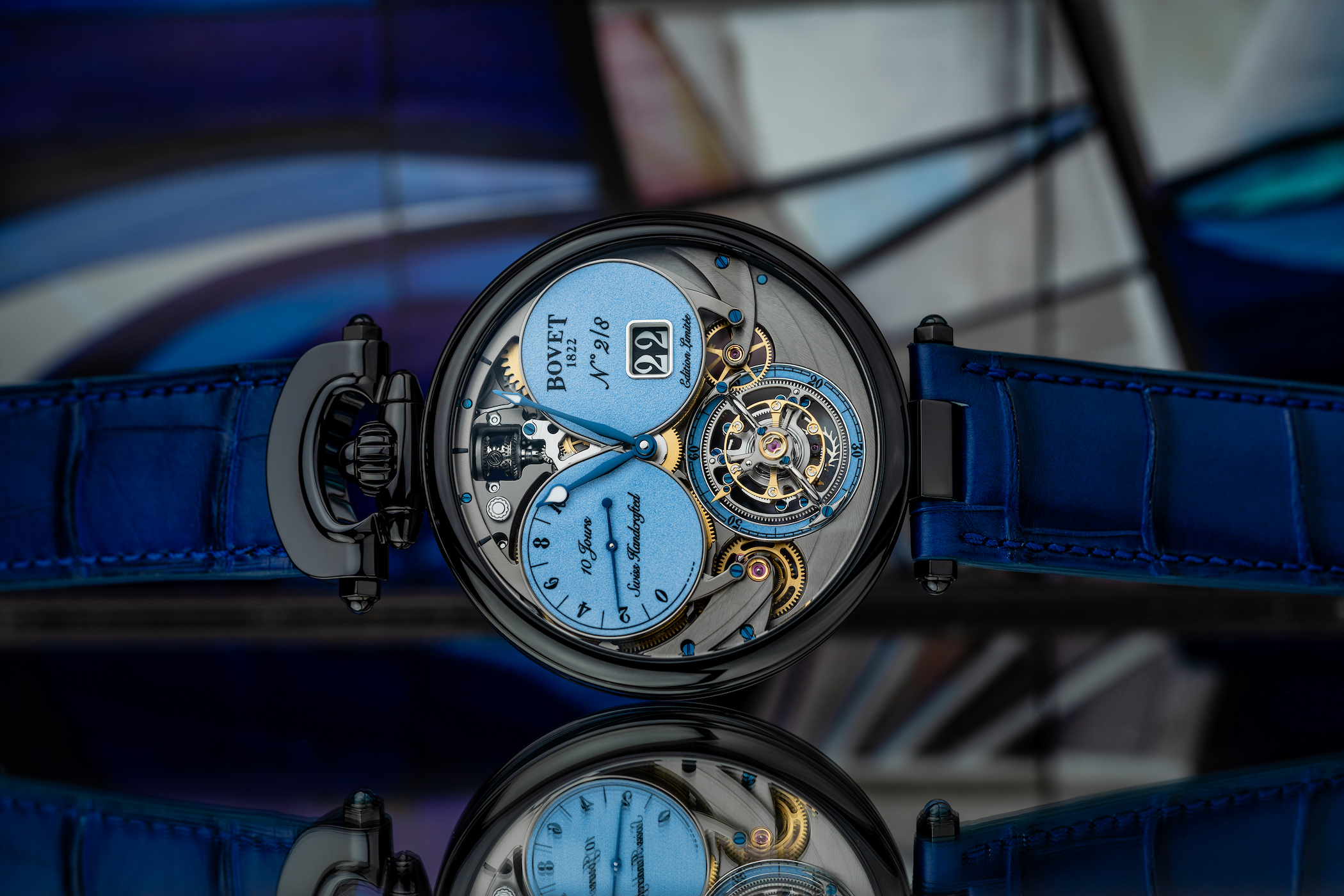 Turning the watch over, the back of the movement reveals the other side of the tourbillon and the spherical winding differential gear through an aperture in the barrel bridge. The gear train is held in place by distinctive finger bridges. The beautiful architecture is enhanced by a circular and blackened Côtes de Genève.The manual-winding movement beats at 18,000vph, and on a single barrel can deliver a mighty 10-day power reserve. Thanks to the ingenious spherical differential winding system, the number of crown turns needed to wind the barrel spring fully is halved without increasing friction on the gears. 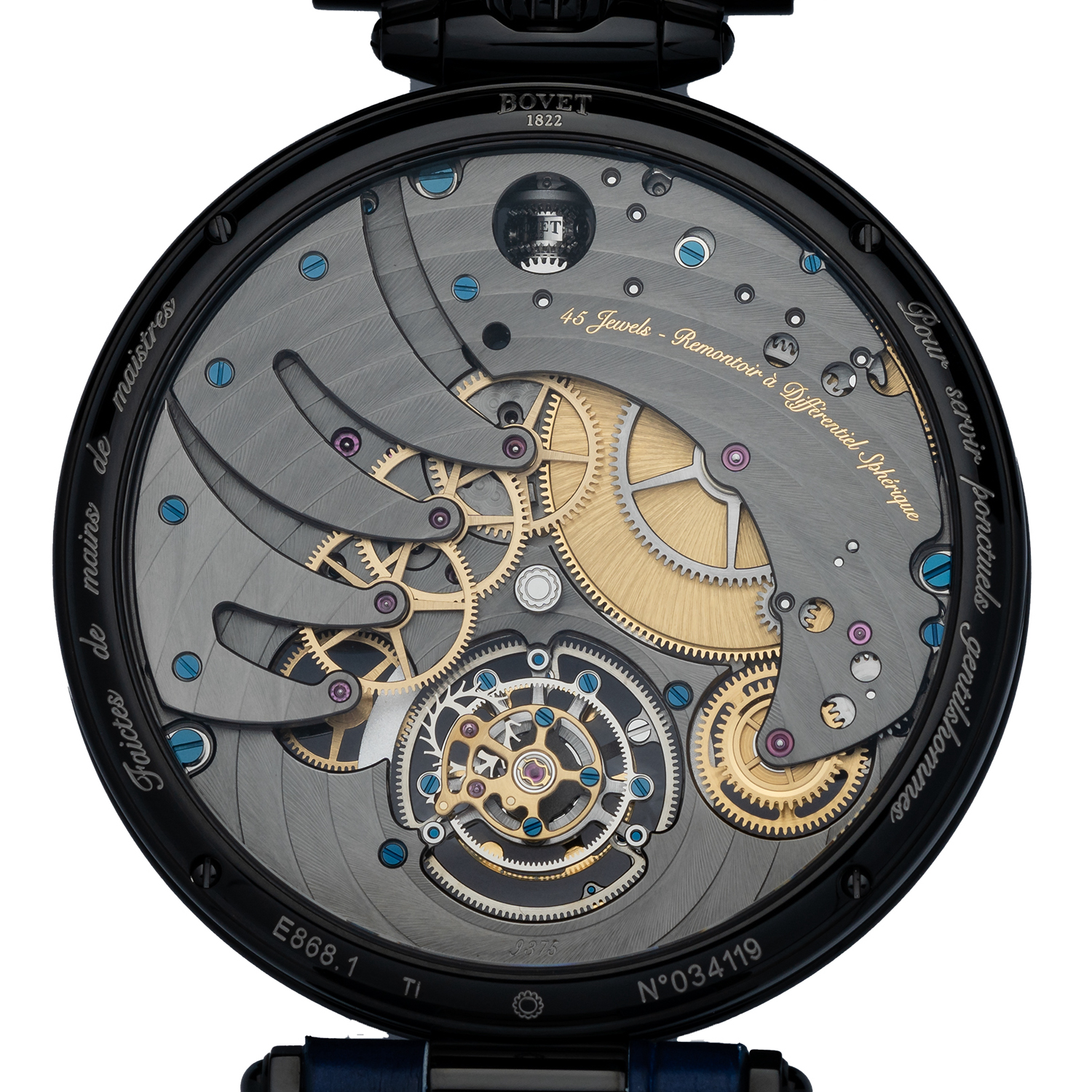 The Bovet 1822 Virtuoso VIII Chapter Two is limited to eight pieces in each colour. The watches are fitted with alligator leather straps and stainless steel pin buckles coated with black DLC. The retail price is CHF 200,000.