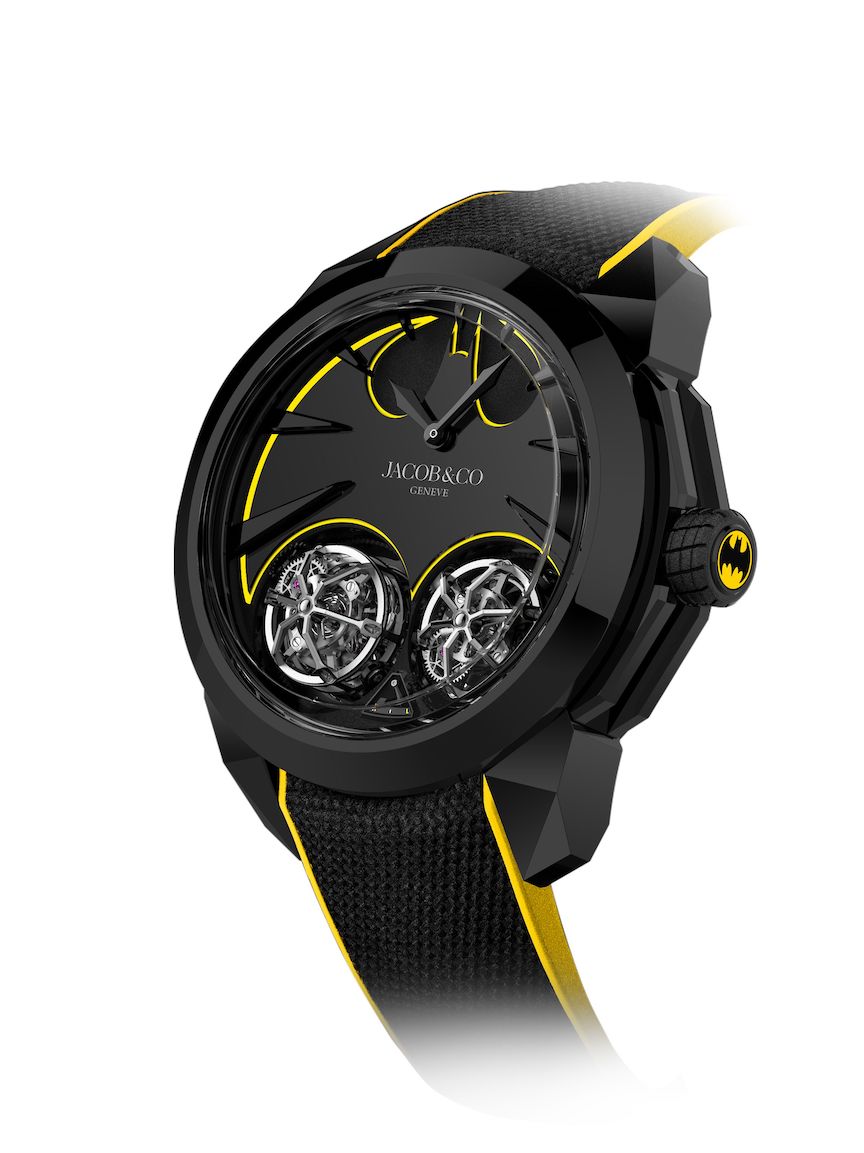 The Caped Crusader is being given a run for his money as the super-hero emerges in the form of Batman for the wrist. Of course, lovers of the famed hero and his Bat accessories will need to have just about a quarter of a million dollars to buy one of the 72 Batman-inspired timepieces.

Working in collaboration with Warner Brothers Consumer Products and DC, Jacob & Co. unveils its newest horological hyper watch: Gotham City.  Inspired by Bruce Wayne, aka, Batman, the 45.5mm watch features an artistic bat shaped  dial outlined in bold yellow and a host of accents front and back that scream Batman. 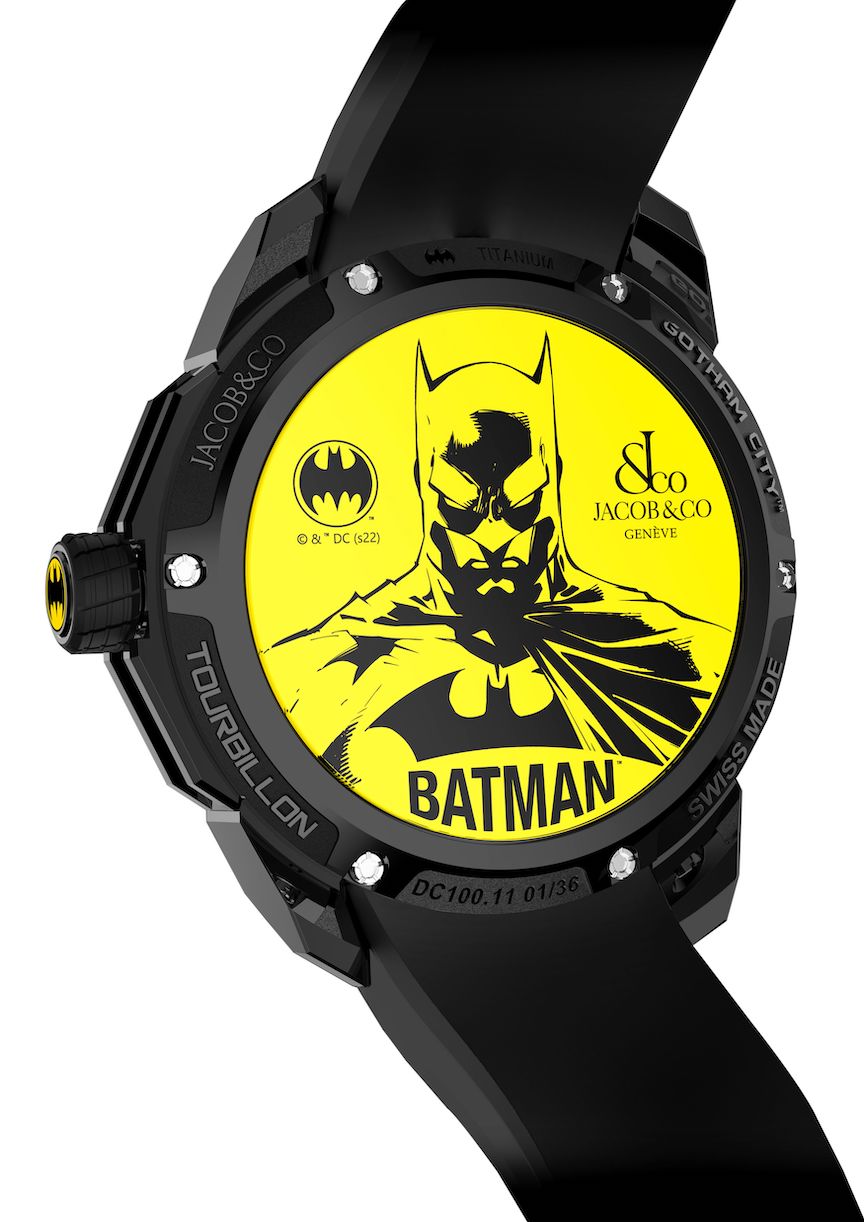 Two versions of the watch will be made: one in black Diamond Like Carbon (DLC) titanium in a limited edition of 36 pieces that will sell for $220,000 and the other in 18-karat rose gold (also in 36 pieces) that sells for $240,000. Both watches are chocked with the same movement: the Jacob & Co. manual winding JCFM10 movement consisting of 382 parts. The movement boasts twin flying triple-axis tourbillons that are visible on the dial side. Constantly in motion, the tourbillon escapements  are high-speed – much like Batman himself when he flies into action.

The two triple-axis tourbillons  — shaped like the grapnel launcher that Batman uses to scale building walls in Gotham City — also represent the duality of Bruce Wayne and his luxury lifestyle (especially with the 18-karat rose god version), as well as his Caped Crusader role – masterfully illustrated in the black DLC titanium version.  Those titanium tourbillons are sandblasted and finished with both shiny black and matte gray surfaces, also recalling the duality of Batman and Bruce Wayne. 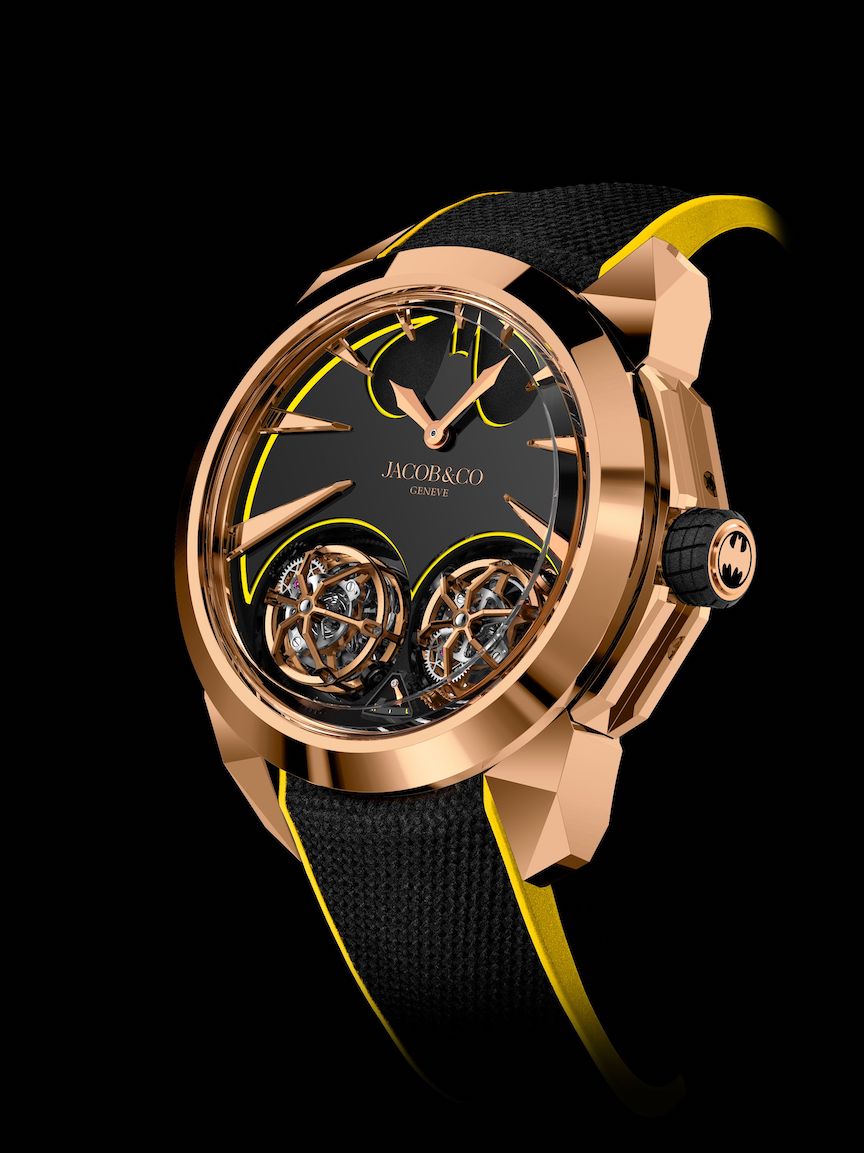 While the case of the watch is round, it boasts strong angles and sharpness that also emulate the Batmobile and the cape. The lugs, for instance, are sharply angled like the Bat cape and the crown is covered in rubber finished to the same tread as  the tires of the Batmobile.  Even the hour markers are like daggers reaching deep into the dial like the fray of bat wings.

As mentioned, the  dial of the watch is shaped like the Batman emblem and is crafted of a single slab of pitch black onyx. The outline of the Bat logo is in yellow Neoralithe, a composite that includes Super-LumiNova, so it lights up at night. The caseback of the two versions of watches is different.

The black version of Gotham City boasts a more in-your-face Batman case back, as it is created in bold yellow color with a signature drawing of Batman in black. It also features the DLC logo and the Jacob & Co. logo.  The case back is achieved by laser-etching the underside of a sapphire plate with the design. The hollowed parts of the etching are lacquered in black, and the rest is lacquered in yellow. 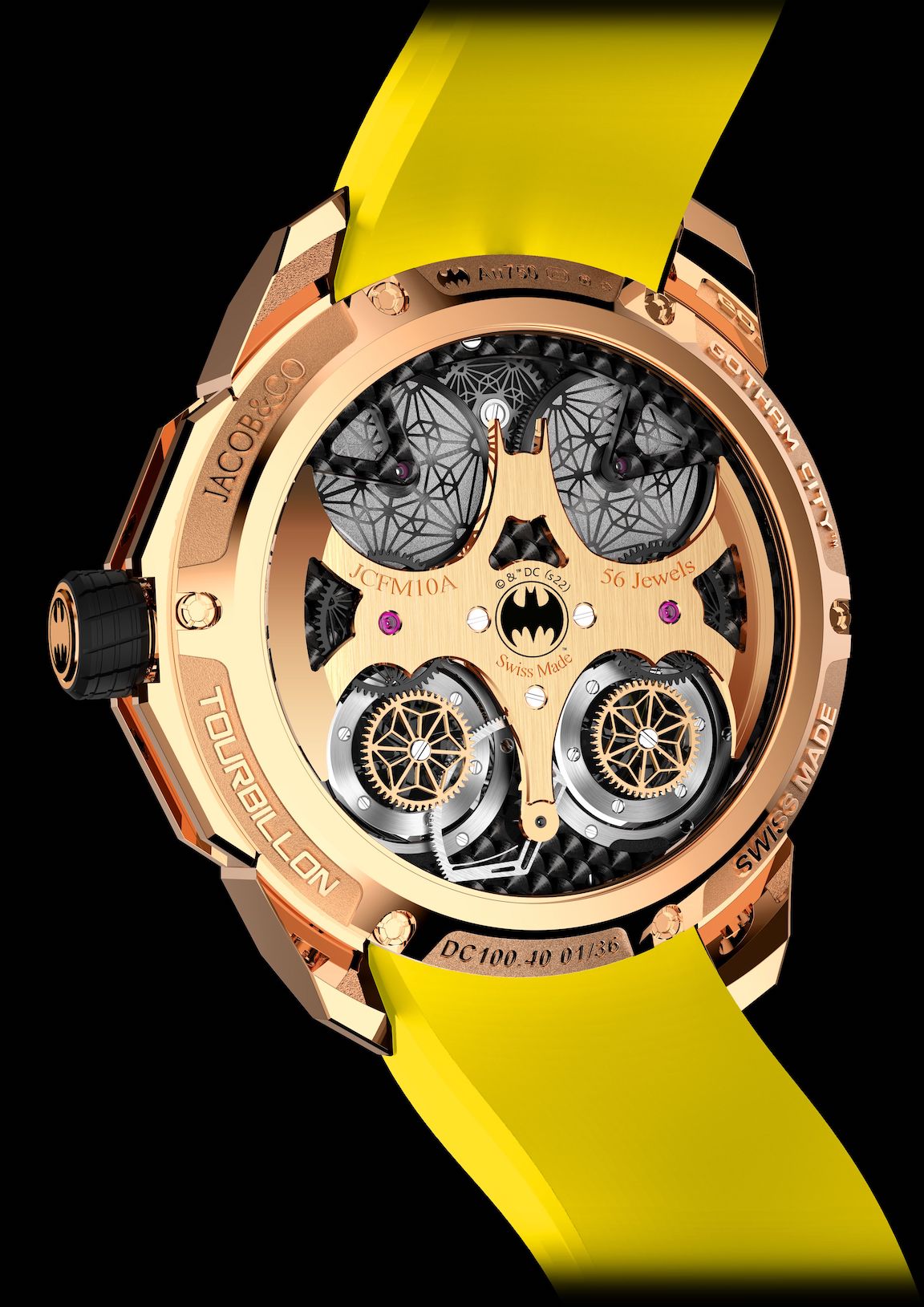 The back of the 18-karat gold Jacob & Co. Gotham City watch.

The case back of the 18-karat gold version of Gotham City is transparent sapphire crystal and allows a view of the movement, which is finished with a motif inspired by Batman. In fact, the bridge spans the entire diameter of the movement and is bat shaped.

The caliber is highly complex and technical, with sequential tourbillon escapements that jump forward at a certain point of their mechanical dance. They are also flying tourbillons (meaning they are mounted only in one place). Of course, Jacob & Co. had to make them flying tourbillons – indicative of the superhero and his ability to seemingly fly through the air.  Gotham City is the first watch to be produced in this partnership, that was announced last year. Bam!

(This article by Roberta Naas first appeared on her column on Forbes.com)