Following numerous new models in the Speedmaster collection this year already (incl. the brand new Moonwatch), Omega is once again adding a new version in the range. A new Speedmaster…? Yes, but this one is actually quite special, as it comes with many unprecedented features, and it brings back a name that is dear to the brand. So, let’s go straight to the point; here’s the new Omega Speedmaster Chronoscope Collection, a new design, a new size, a new movement, the comeback of the Chronoscope name, a dial that echoes vintage watches from the brand… Let’s have a closer look.

The Comeback of the name Chronoscope

The name Chronoscope isn’t new to Omega. It has been utilized in the past already, during the mid-2000s in the context of the De Ville collection, to name chronograph watches… In fact, it goes much deeper than this, since the first watch named Chronoscope by Louis Brandt (the company that will become Omega) dates back 1885 – you can see this pocket watch below. But why Chronoscope? That requires to look back at early days of watchmaking. 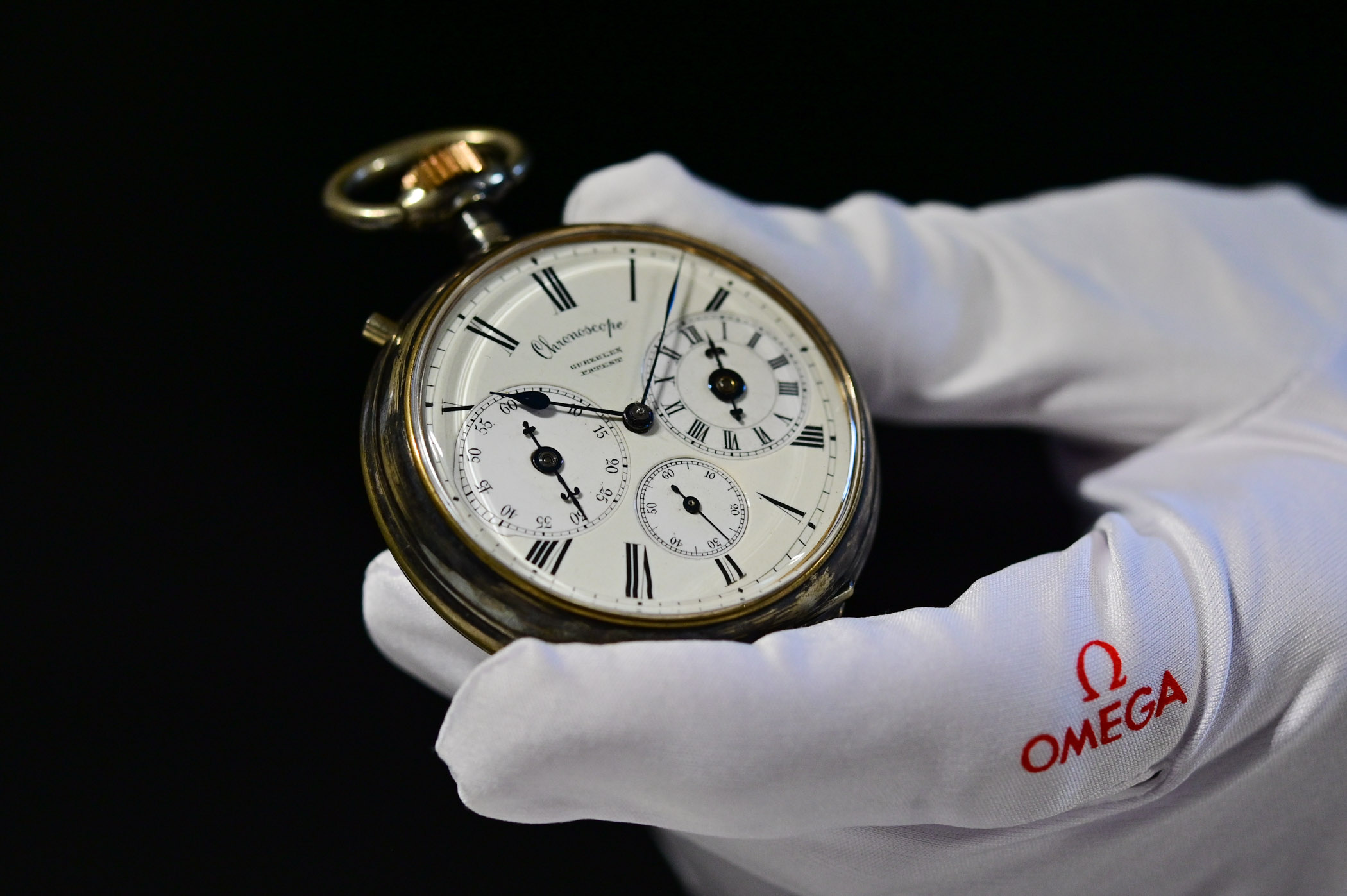 The name chronograph, as it is used today by most of the watchmakers, could well be a disambiguation. Indeed, the graph in the name comes from the ancient greek gráphō that means ‘to write’ in English. Looking at the history of watchmaking, the name was first given to the invention of Nicolas Rieussec, who developed one of the first instrument to record elapsed times. Even though it is widely known that the first instrument to record intervals of time has been created by Louis Moinet, Rieussec’s invention is noticeably different from classic watches or clocks in the sense that it was composed of a rotating dial, revolving under a fixed hand equipped with an ink reservoir. As such, Nicolas Rieussec’s chronograph was literally writing down elapsed times. Hence the creation of the name chronograph. However, in modern watchmaking, no instrument is ‘writing’ the time anymore, but our modern chronograph watches are displaying, showcasing the time on their dials by the mean of hands… And with ancient greek in mind, that would be named scope and not graph. Indeed, the word skopos could be translated by ‘to observe’. According to Omega, this means “a device used to accurately determine the duration of a phenomenon.”

Omega is bringing back the Chronoscope name today, however for a rather special edition of its star chronograph watch, with the new Speedmaster Chronoscope collection.

What we see here with the new Speedmaster Chronoscope is obviously, on many levels, a new iteration of a Speedy watch. As such, the overall design is familiar, specifically for the case. This means an external bezel with scale (remember that the Speedy was the first watch with this feature in 1957), a case with asymmetrical design and twisted lugs, and a raised, box-shape crystal on top. 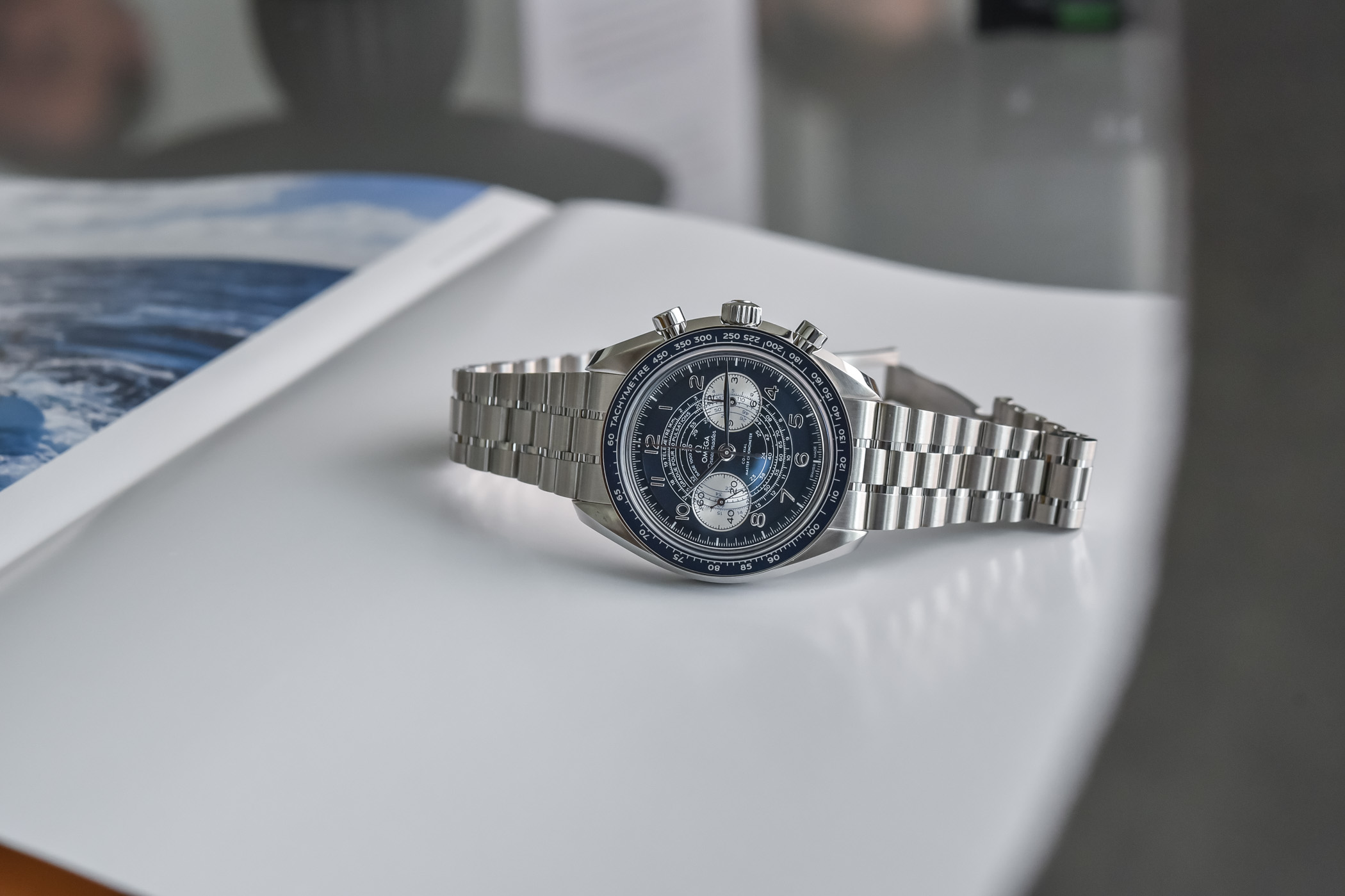 There are, however, a few new features on this Chronoscope. And the first is the size of the watch. While classic Moonwatch models are all sized at 42mm, and the Automatic/Racing/DSOTM versions come at 44.25mm, the Omega Speedmaster Chronoscope introduces a new “mid-size” with a 43mm case. The shape is far from novel, and pushers/crown and case bands will feel familiar to Speedy lovers. As with the recently revamped Moonwatch, Omega has worked on the proportions. This means that, despite the rather large diameter, lug-to-lug is contained at 48mm and, since the watch comes with a new hand-wound movement, it is also relatively thin at 12.8mm – in fact thinner than a Moonwatch. It feels on the wrist, with a watch that wears slightly smaller than expected (especially on bracelet, but more on that later). 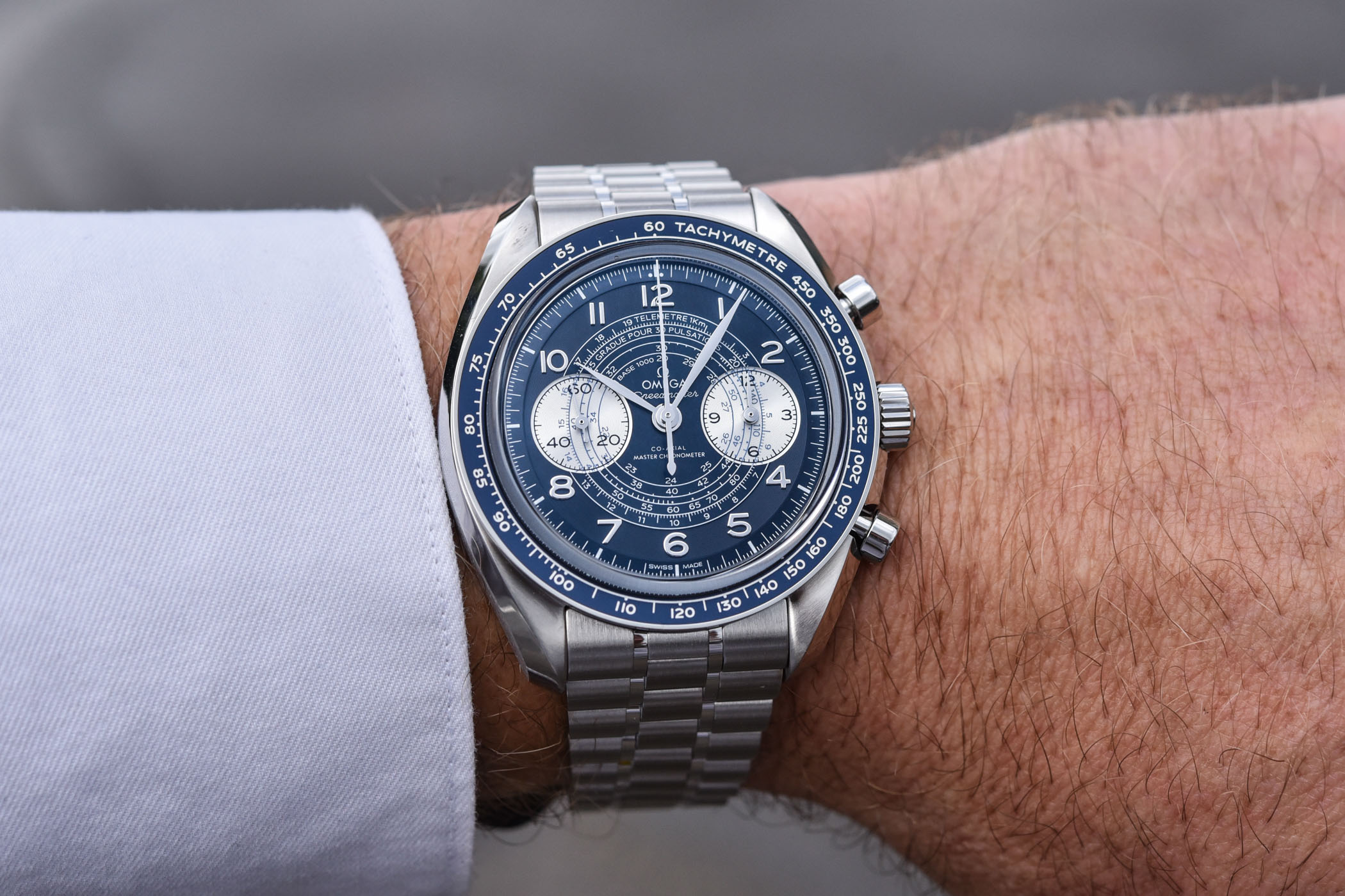 The case, at least for 6 of the 7 editions, is made of stainless steel and features the classic combination of brushed surfaces and polished accents on the sides. The raised, fixed bezel is equipped with an anodized aluminium insert, which features the first of the 4 scales of this Chronoscope watch, a classic tachymeter. The case has a typical “sapphire sandwich” architecture, with a water-resistance of 50 meters (like most Speedmaster watches).

The most noticeable element of the Omega Speedmaster Chronoscope is its dial, with a design and architecture that defines the name of the watch. As said above, its objective is to “accurately determine the duration of a phenomenon” and for that, it can tell you how fast you are going, based on how far you have travelled, but also how far you are from something that is visible and audible or what is your heartbeat rate. You’ve guessed it, the Chronoscope features the 3 classic scales of a chronograph, meaning a tachymeter, a telemeter and a pulsometer. 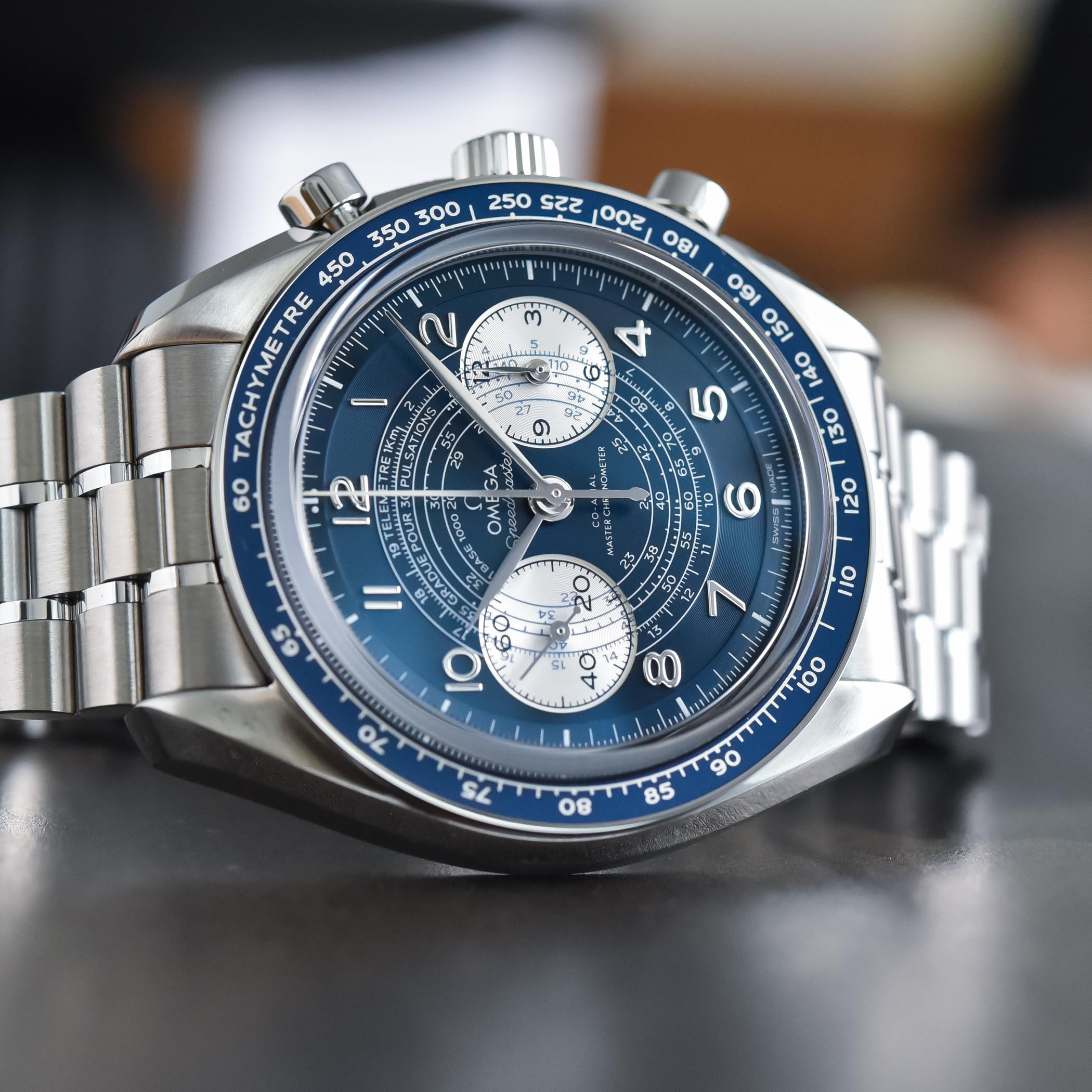 The tachymeter is divided in two scales. First is a classic one on the bezel, to measure speeds from 500 to 60 units (kph, mph…) Then comes a secondary scale, on two levels, which is at the center of the dial and can measures speeds from 60 to 20 units (so up to 3 minutes of travel). The two other scales, telemeter and pulsometer, are classically printed on the inner part of the dial and refers to old Omega chronograph watches from the 1930s/1940s. 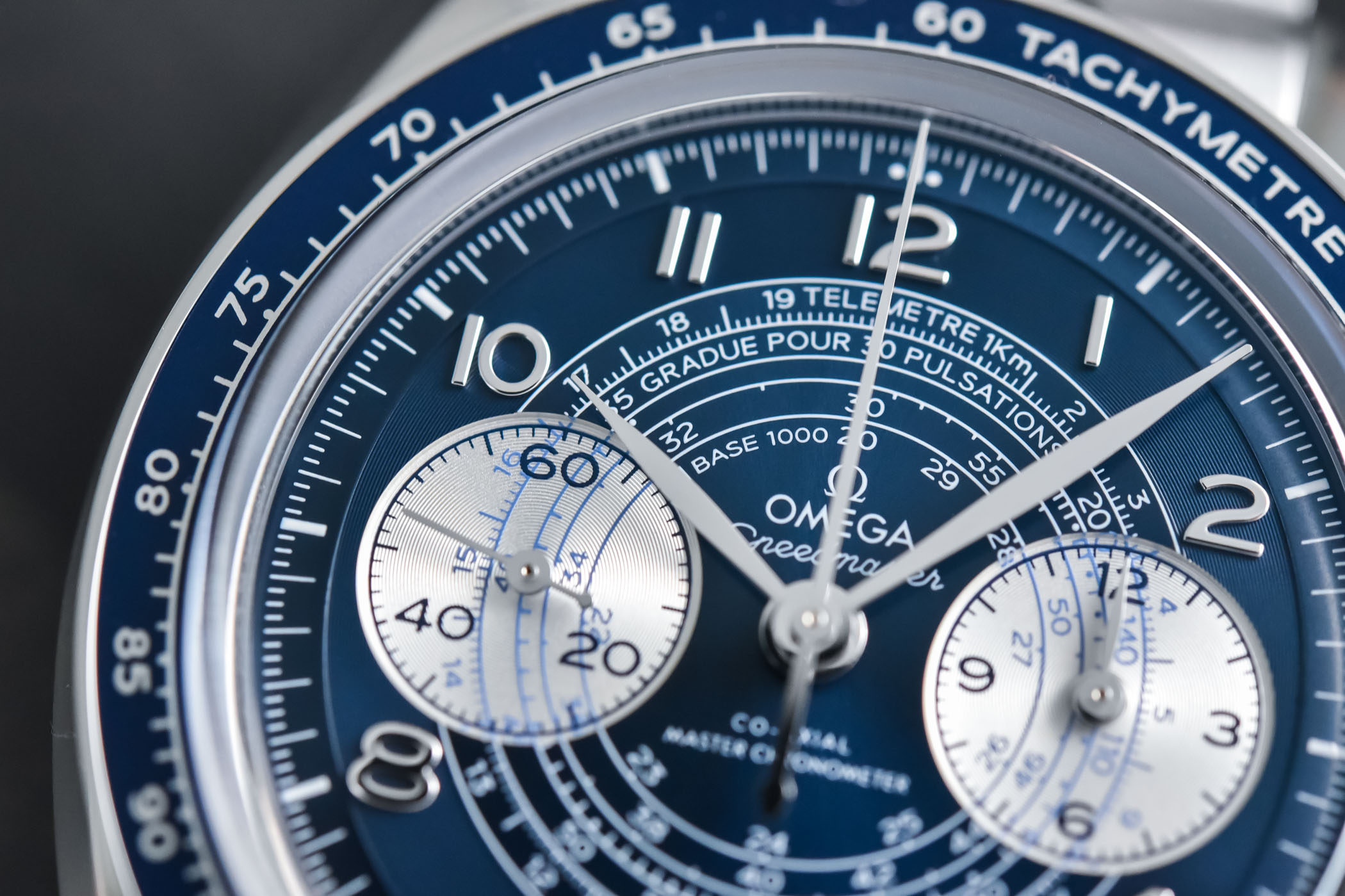 The dial is also quite unique to this Speedmaster Chronoscope, and doesn’t echo previous models in the range. It is a bi-compax layout, with small seconds at 9 o’clock and the classic Omega co-axial counter at 3 o’clock, features indications of the hours and minutes. And indeed, there’s no date on this watch. The Chronoscope collection introduces a brand new dial, with a stepped profile. The hour chapter ring features thin and nicely designed applied Arabic numerals, on top of a concentric pattern. The hands are also new to this watch, polished and leaf shaped. 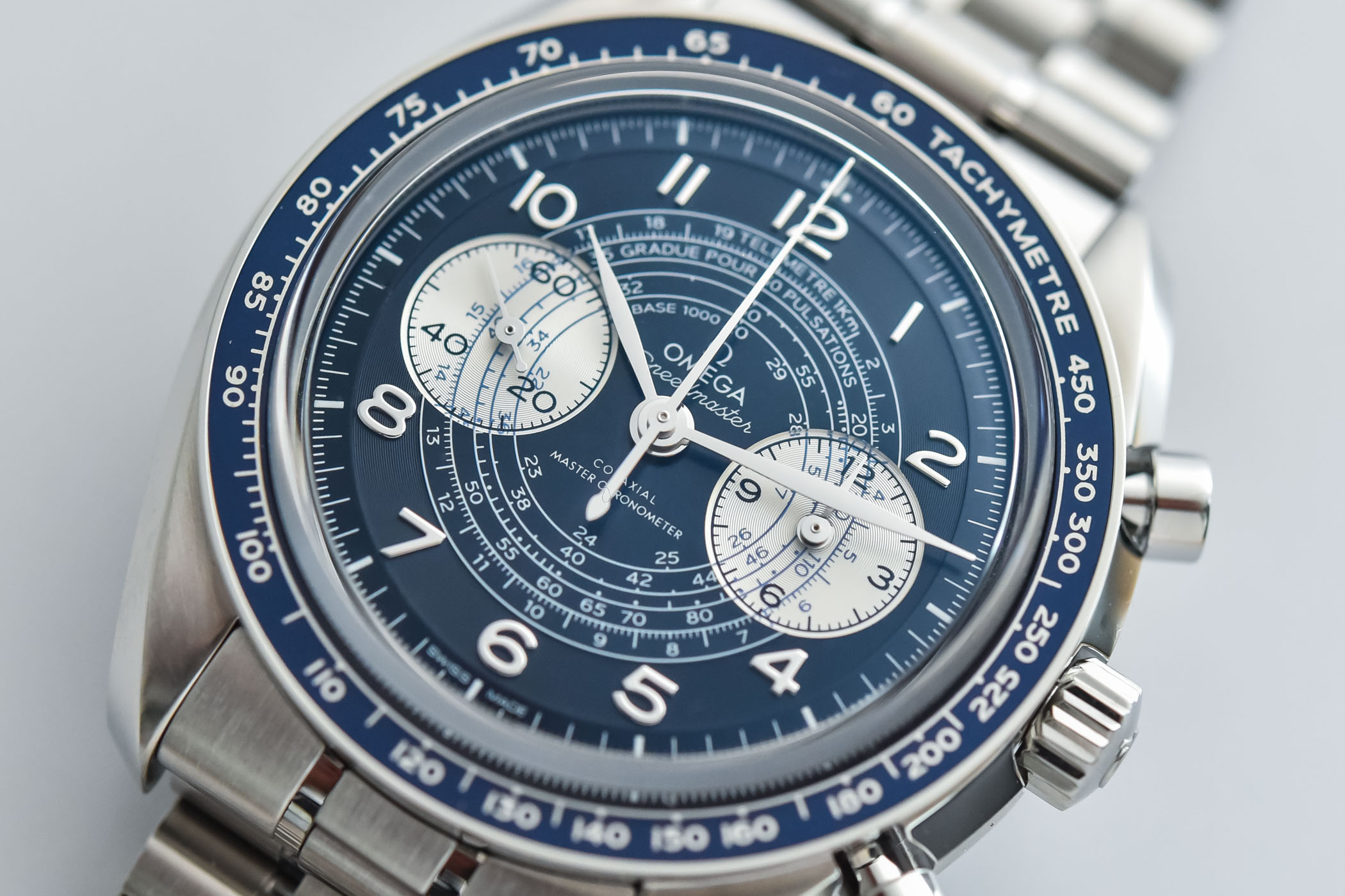 As for the steel models, there are 3 different dials available. First is a blue dial with silver counters and silver-coloured hands and indexes, and a matching bezel. Second is a silver dial with tone-on-tone counters, blue accents on hands and indexes and a blue bezel. Finally is a panda edition with silver dial, black counters and a black bezel. 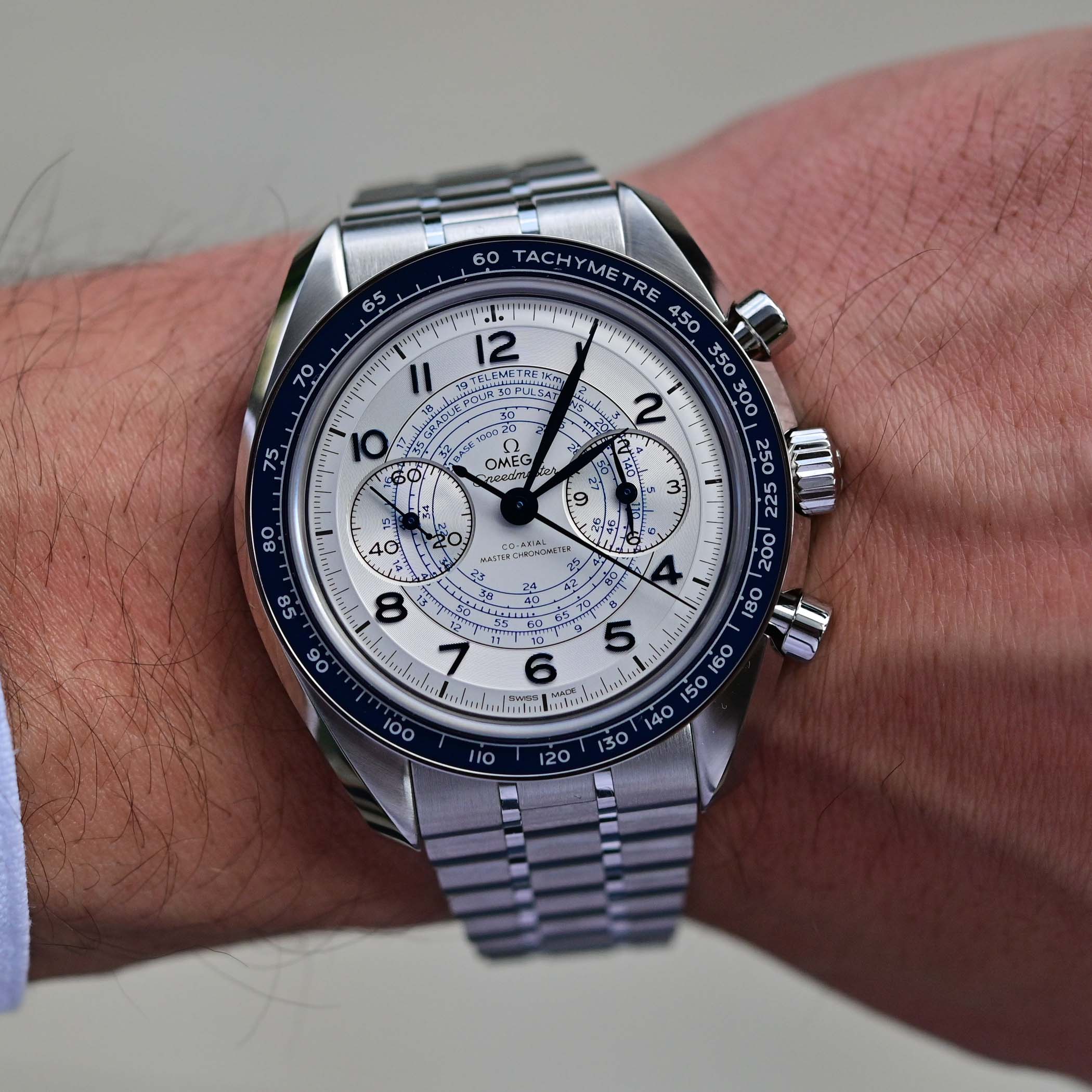 Inside the case of the Speedmaster Chronoscope is a new movement, or to be more precise a new iteration of Omega’s Master Chronometer automatic chronograph. Based on the calibre 9900, this new 9908 movement is a hand-wound version, characterized by its new ¾ plate. It however retains the same architecture, with a column-wheel and a vertical clutch. Also, the double-barrel layout, used to provide stable torque and not so much a longer power reserve, has been maintained. The watch beats at 4Hz and has a comfortable power reserve of 60 hours. 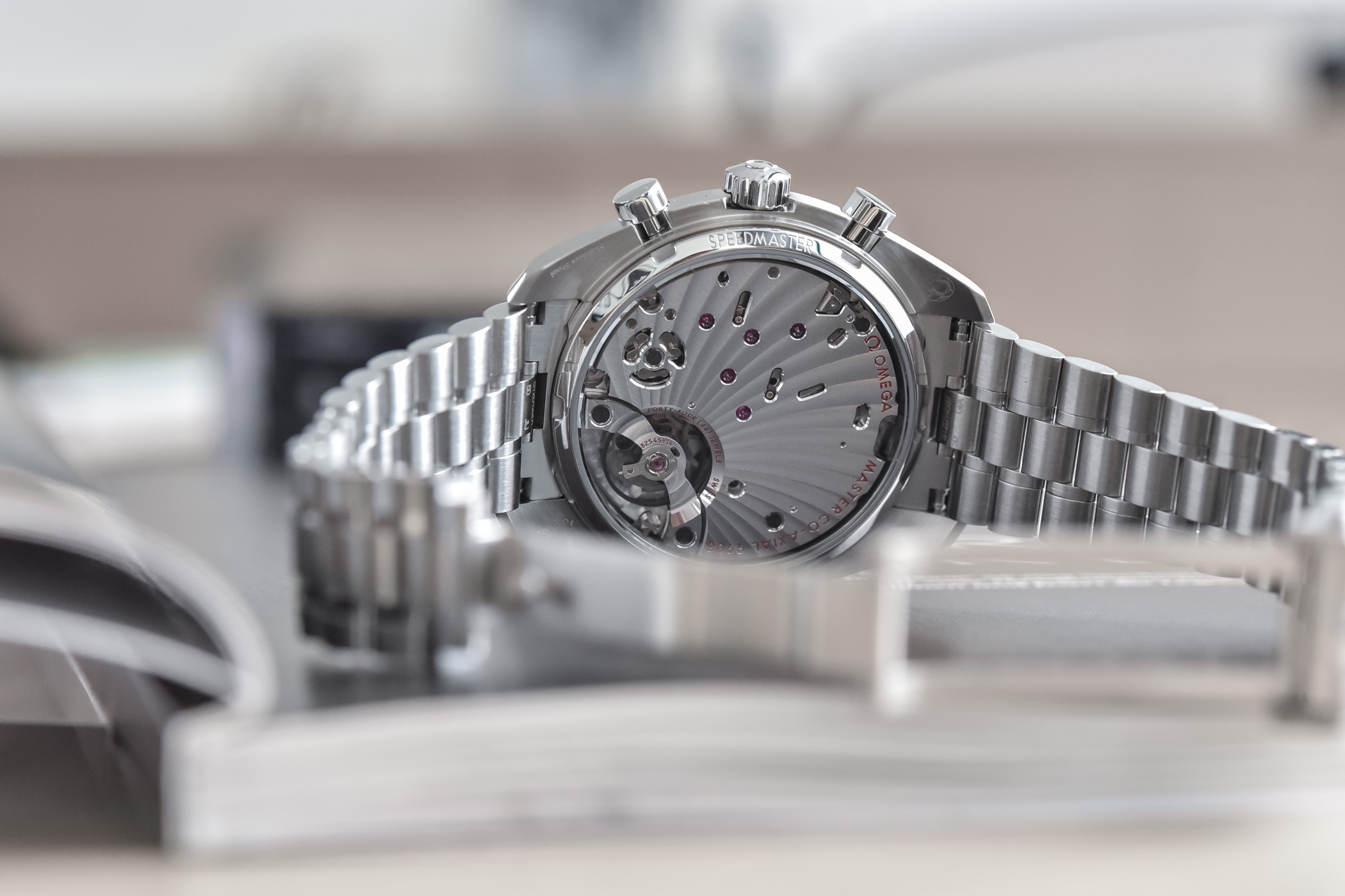 As all modern Omega movements, this new Calibre 9908 features a co-axial escapement, is Master-Chronometer certified and anti-magnetic to impressive levels. The view through the caseback reveals a large bridge decorated with the classic Arabesque stripes, yet radiating from the centre of the balance wheel. The finishing is typical of Omega’s production; clean and pleasant to the eye. 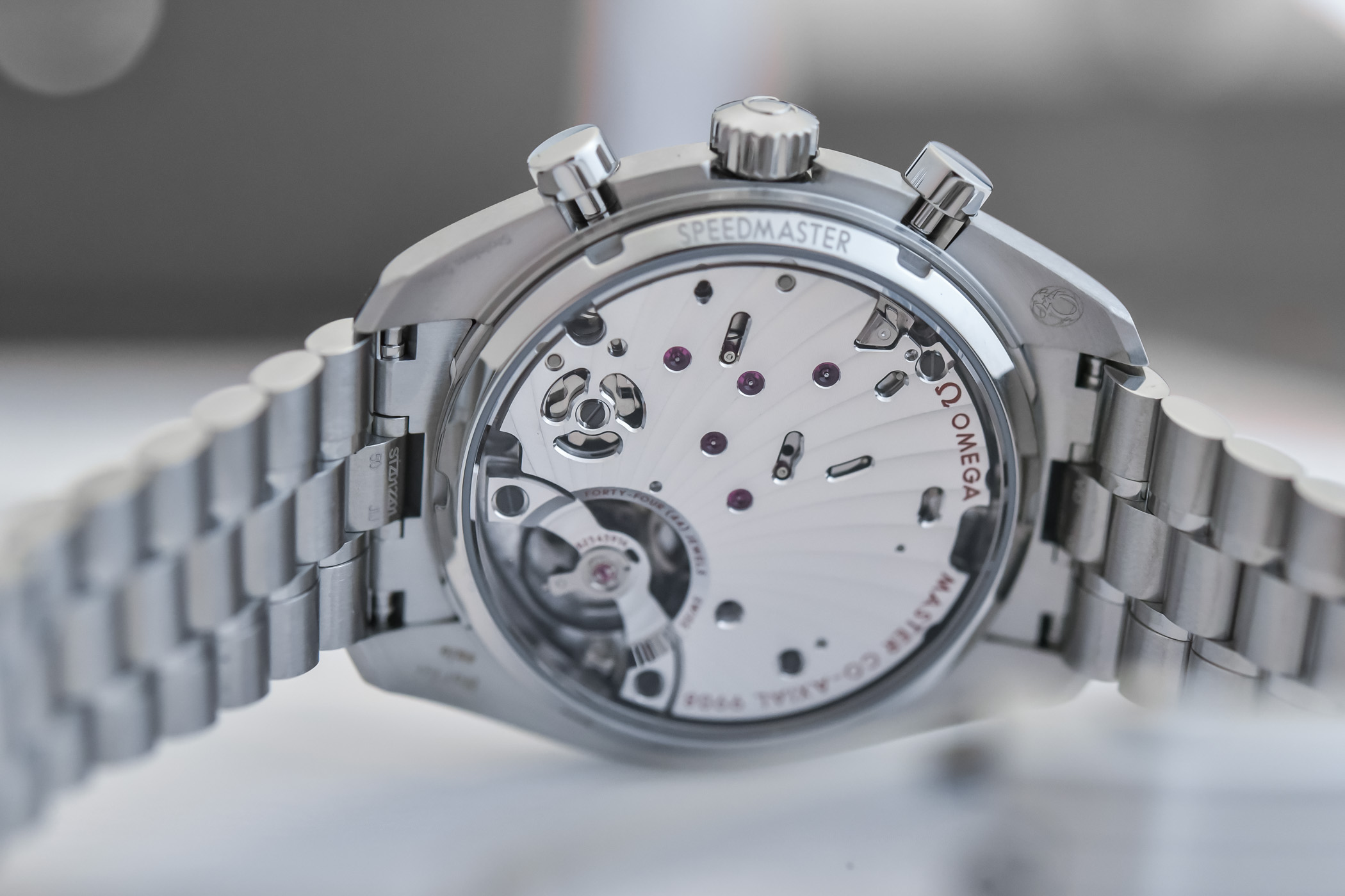 As said, there are 6 stainless steel references available in the new Omega Speedmaster Chronoscope collection. Each of the 3 dial is available either on a leather strap, closed by a pin buckle, or a stainless steel bracelet. The design is identical to that of the new Moonwatch, including the thin clasp with stripped pattern. The bracelet measures 21mm at the lugs and tappers a lot towards to clasp, at 16mm. In the concept introduced with the new Moonwatches, the Chronoscope being equipped with a sapphire crystal, it features polished mid-links. 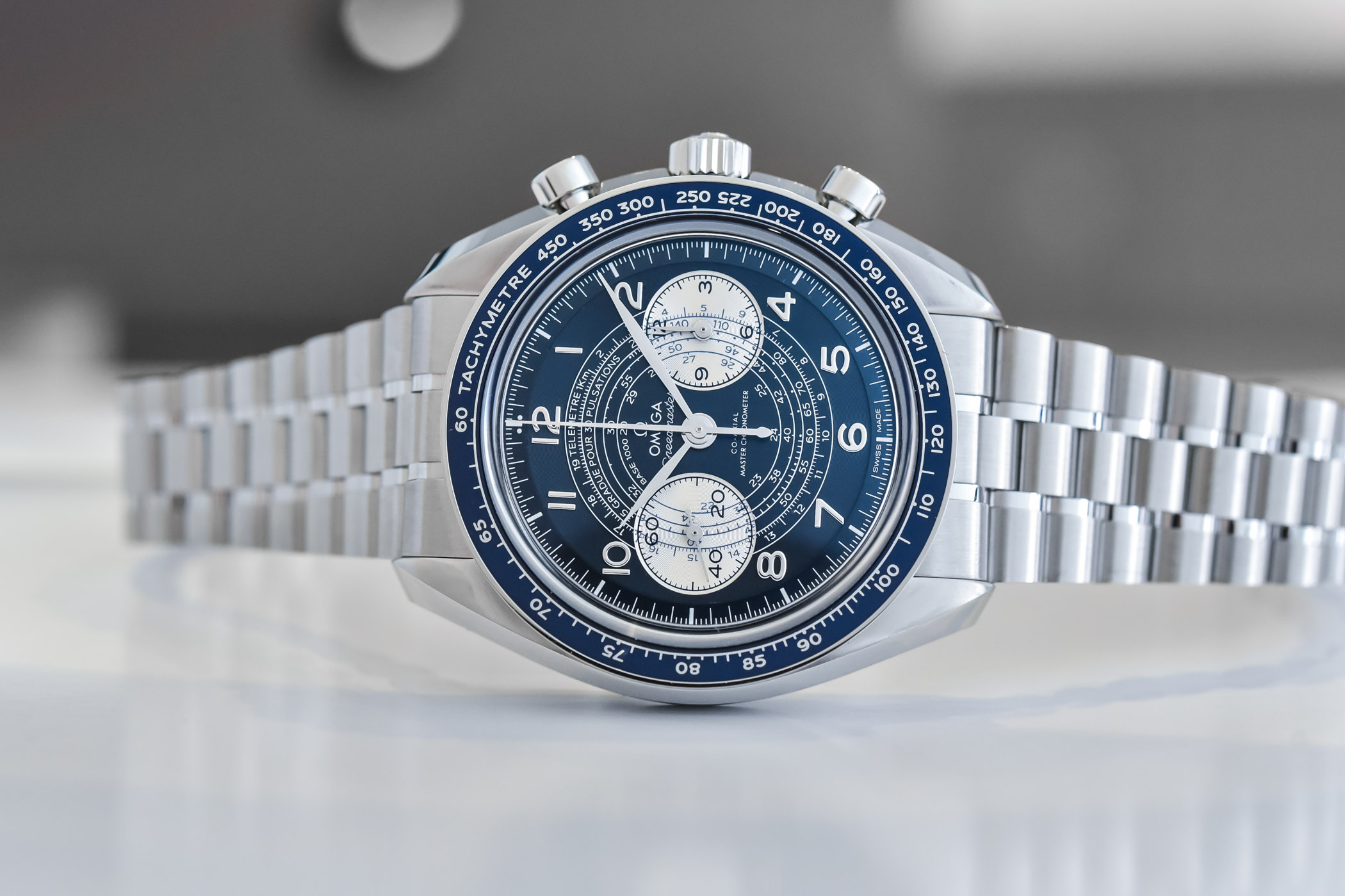 New to this model, the clasp features micro-adjustement with a push-and-slide mechanism. It allows a few millimeters of adjustment (about 5mm) for hot summer days. Also, as with the new Moonwatch, Omega has created short end-links, which go down very close to the case and hug the wrist. You’ll be surprised but the models on bracelet actually wear smaller than their equivalent on leather straps… 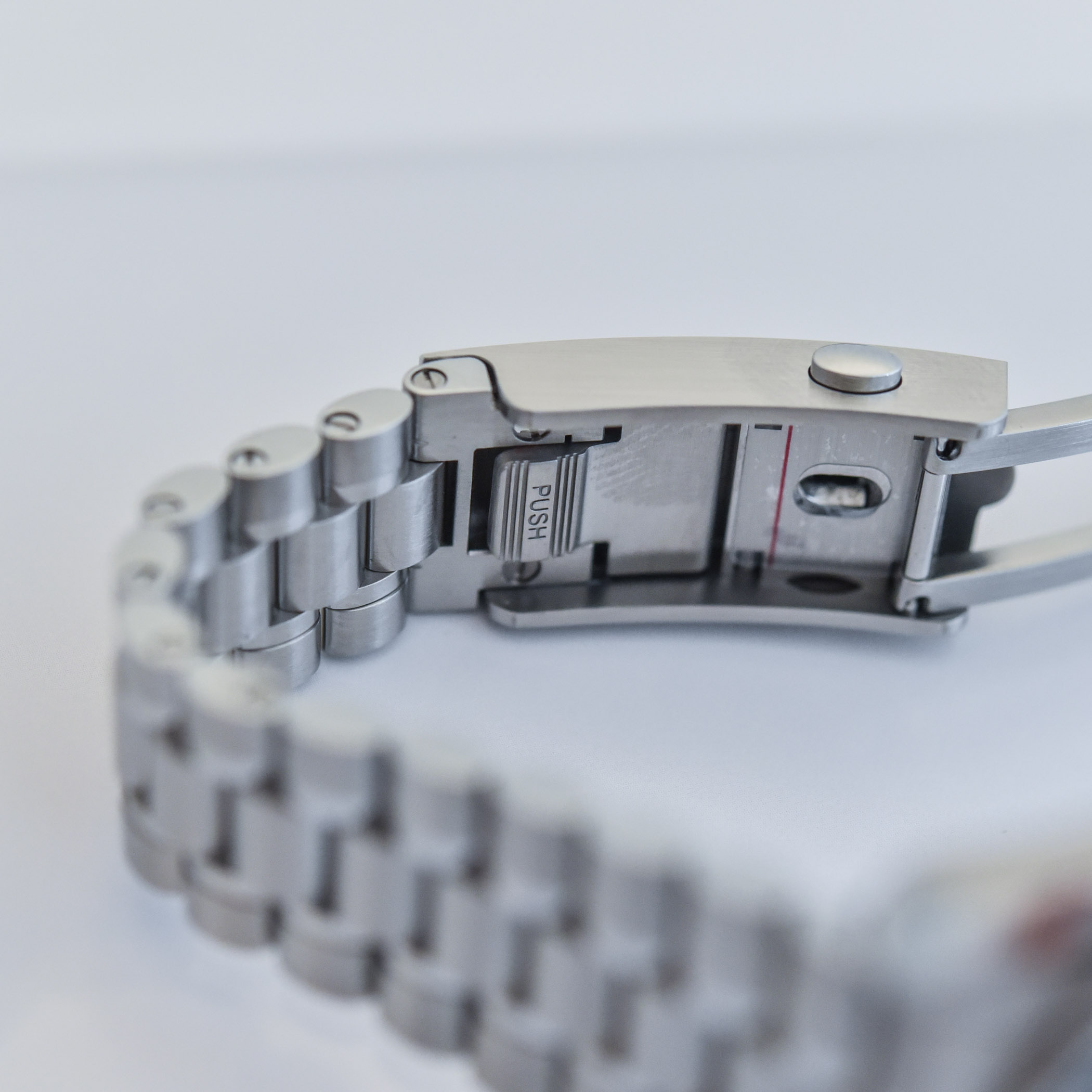 In addition to the steel models, and just like the recently introduced Seamaster 300 collection, the Omega Speedmaster Chronoscope collection comprises an addition watch made of the brand’s latest proprietary alloy, bronze-gold. Certified as a 9k gold alloy, it comprises 50% of copper, 37.5% of gold, silver for the colour and smaller proportions of gallium (a very rare metal that melts at 30 degrees…) and palladium. 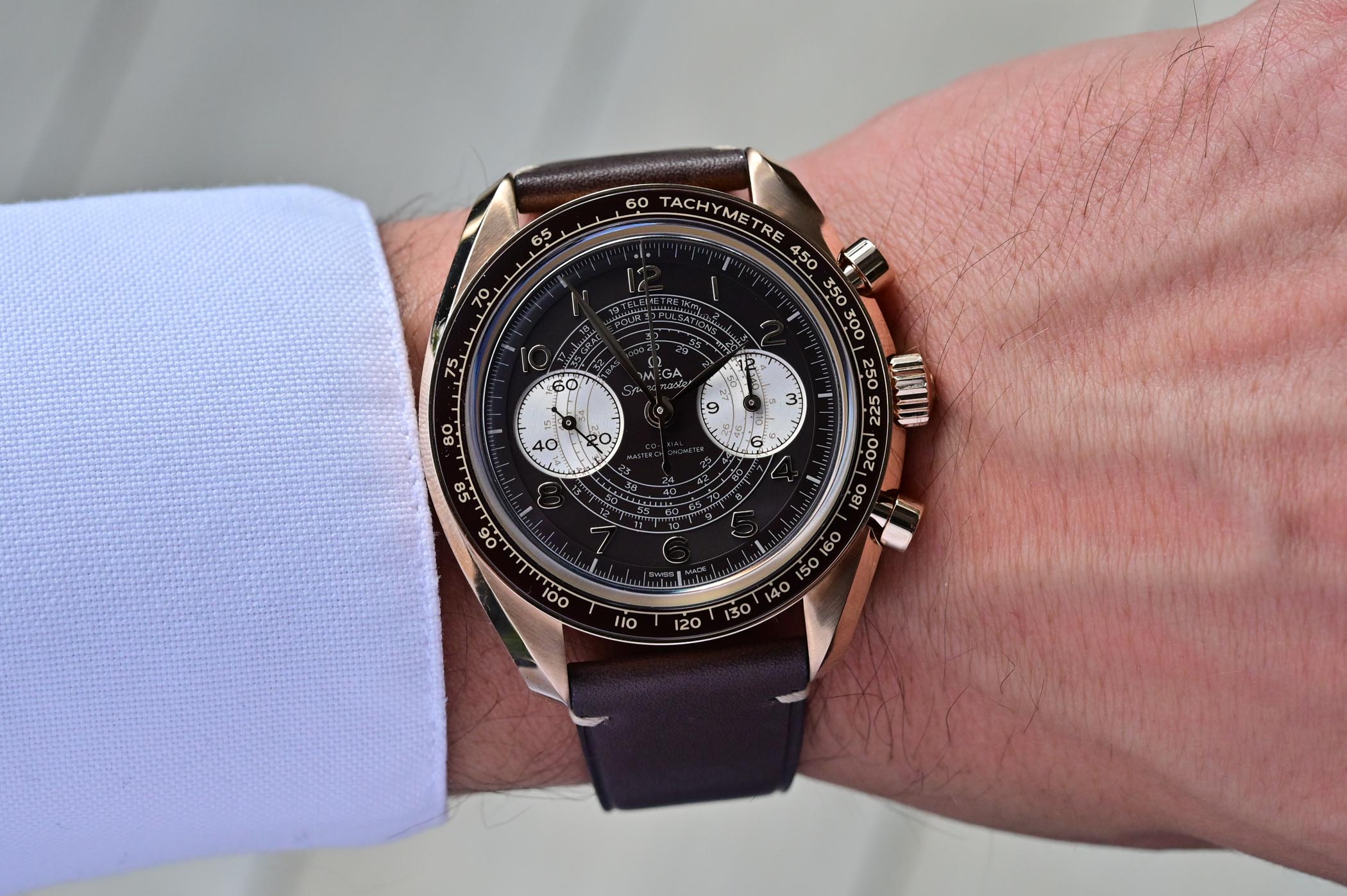 The idea with this alloy is to combine the cool colour of bronze, without the oxidation, and a precious feel with gold. This edition, only available on leather strap, also comes with a solid bronze dial with opaline silvery subdials, and its dark brown colour result from an oxidation process. Also, this version has a ceramic insert on the bezel, with the tachymeter scale filled in vintage-colored enamel. The leaf-shaped hands and Arabic numerals are colored with Bronze-Gold PVD coating. The brown leather strap is closed by a polished-sandblasted Bronze-Gold buckle. All other specifications are identical to the steel models, movement included.

The Omega Speedmaster Chronoscope collection, to the exception of the Bronze-Gold model, is now available from boutiques and retailers. Prices are CHF 8,300 on leather strap and CHF 8,600 on steel bracelet. The bronze-gold model is priced at CHF 14,000.