If you’re into military watches, the name Vertex should sound familiar – and for some, it’s even highly attractive. Indeed, Vertex was one of the brands to be part of the iconic “Dirty Dozen” series, field watches issued to the MoD and officially named W.W.W. (Watch, Wristlet, Waterproof). The brand, which fell into oblivion like so many others, was revived in 2016 by Don Cochrane, great-grandson of the original founder. His intention was to bring the name Vertex back to the forefront of the British watchmaking industry with watches inspired by this military past but with modern execution. The latest creation, the new Vertex MP45 Heritage Edition, pays tribute to this rich pedigree. 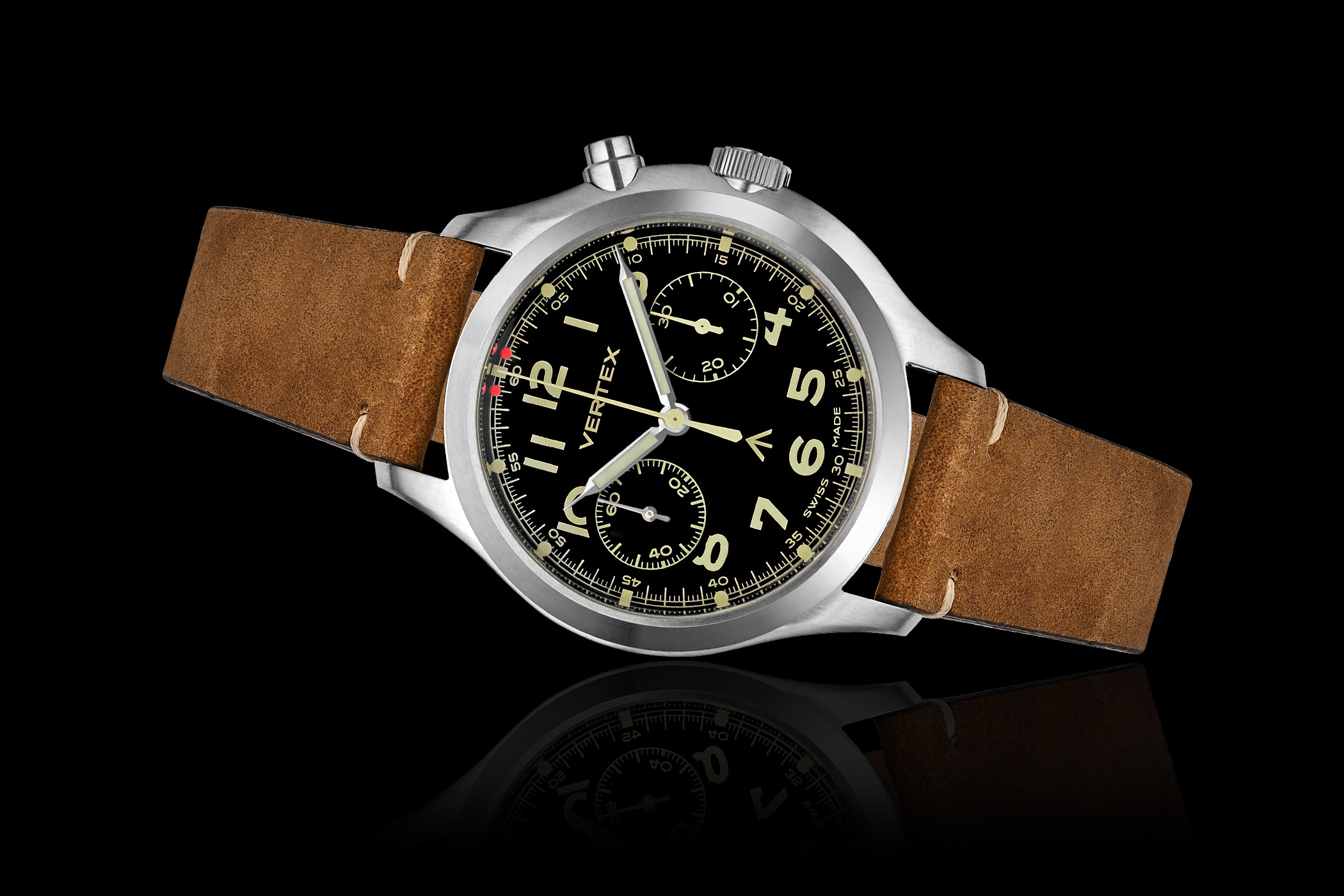 To coincide with the opening of its new two-month residency at London’s Chelsea Barracks, Vertex has just released a new vintage-inspired take on its signature monopusher military chronograph, the MP45, which we’ve extensively reviewed already here in its classic steel version. But here, the idea was to bring back the look of the old days, and some clear military / MoD inspiration. 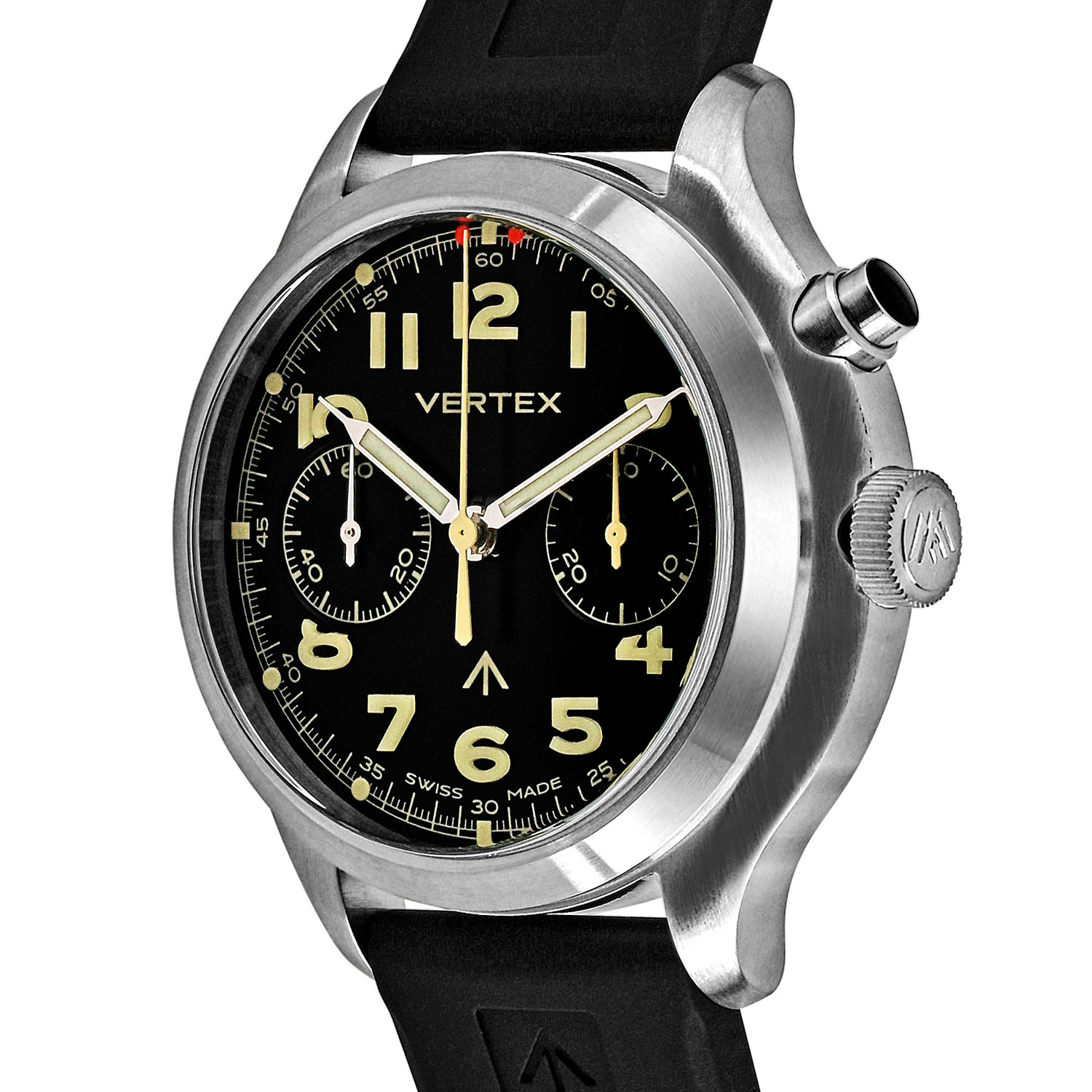 The Vertex MP45 Heritage Edition, like all other editions of this watch, pays homage to the monopusher ordnance timing watch, first commissioned in 1945, but of course, in a far more modern way. This is one of the characteristics of Vertex, not to only make re-editions, but 21st-century versions of iconic models. As such, we find the classic elements of the MP45, meaning a 40mm stainless steel brushed case, with a typical asymmetrical shape – the right side being more robust, in order to bring protection to the semi-recessed crown and the pusher. The case is topped by a double-domed sapphire crystal and is water-resistant to 100m. 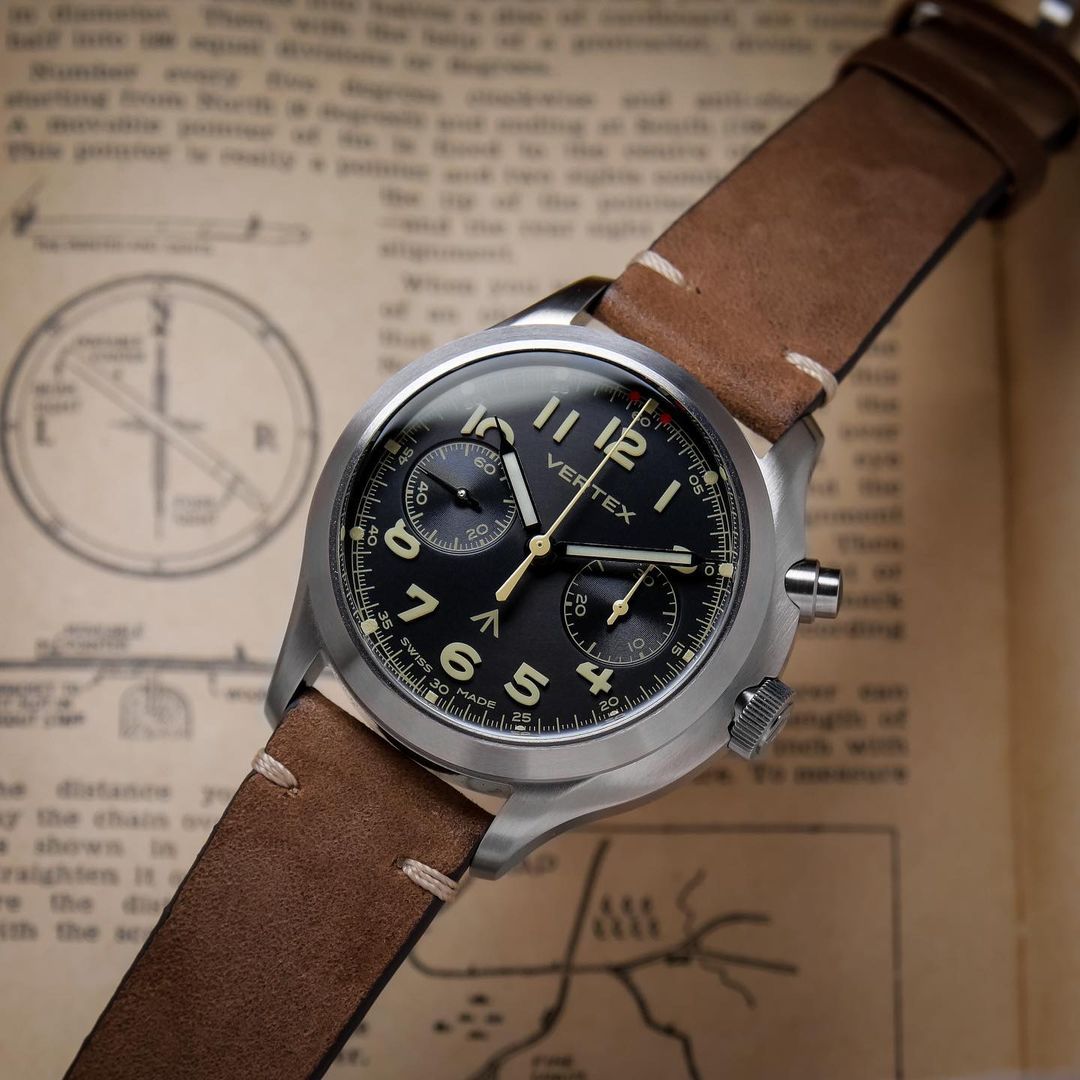 The real deal with this Vertex MP45 Heritage Edition is its dial, which adds a retro, patinated touch to this watch. Usually rather cold in terms of colours, this new edition is far warmer and feels like an antique model with cream-coloured, aged markers. As usual, the Arabic numerals are raised and moulded from blocks of Super-LumiNova, a very cool feature that adds depth. The hands and all the printings are also executed in aged white and the dial, matte in surface, is aged black for a warmer touch too. And, of course, the Broad Arrow or Pheon logo, which denoted property of the British Crown on past watches, is still present at 6 o’clock.

The other specificity of the Vertex MP45 is that it is a monopusher chronograph – all actions are done via the single push-piece at 2 o’clock –  and can be chosen with an automatic or a hand-wound movement. The base, in both cases, is the same, a solid Sellita SW510 MP (with 7750 roots). Visible through the caseback, it’s nicely decorated and otherwise has the same specs as all Sellita-based watches – 4Hz frequency, cam-lever chronograph, 48h power reserve.

The Vertex MP45 Heritage Edition is worn on a vintage brown leather strap. A black rubber strap and a NATO strap are also included in the box. It will be a limited edition of 25 pieces with a hand-wound movement and 25 pieces with an automatic movement. Both are priced at GBP 2,900 (excl. taxes) and can be ordered from the brand’s website.