If you’re into cars and watches – just like us – the name Singer should be familiar to you, whatever category you’ll think about. Indeed, behind this name is the brainchild of Rob Dickinson, who created a car manufacturer known as Singer Vehicle Design, known for making some of the most advanced and insanely cool restored, customized and “reimagined” Porsche 911 classics cars. And this name also refers to Singer Reimagined, the watchmaking sister company that has done a superbly complex and unique chronograph to match the cars. Following the presentation of Singer’s ultra-advanced DLS Project car, Singer Reimagined presents the Track1 DLS Chronograph, which is all about the same recipe as the car. 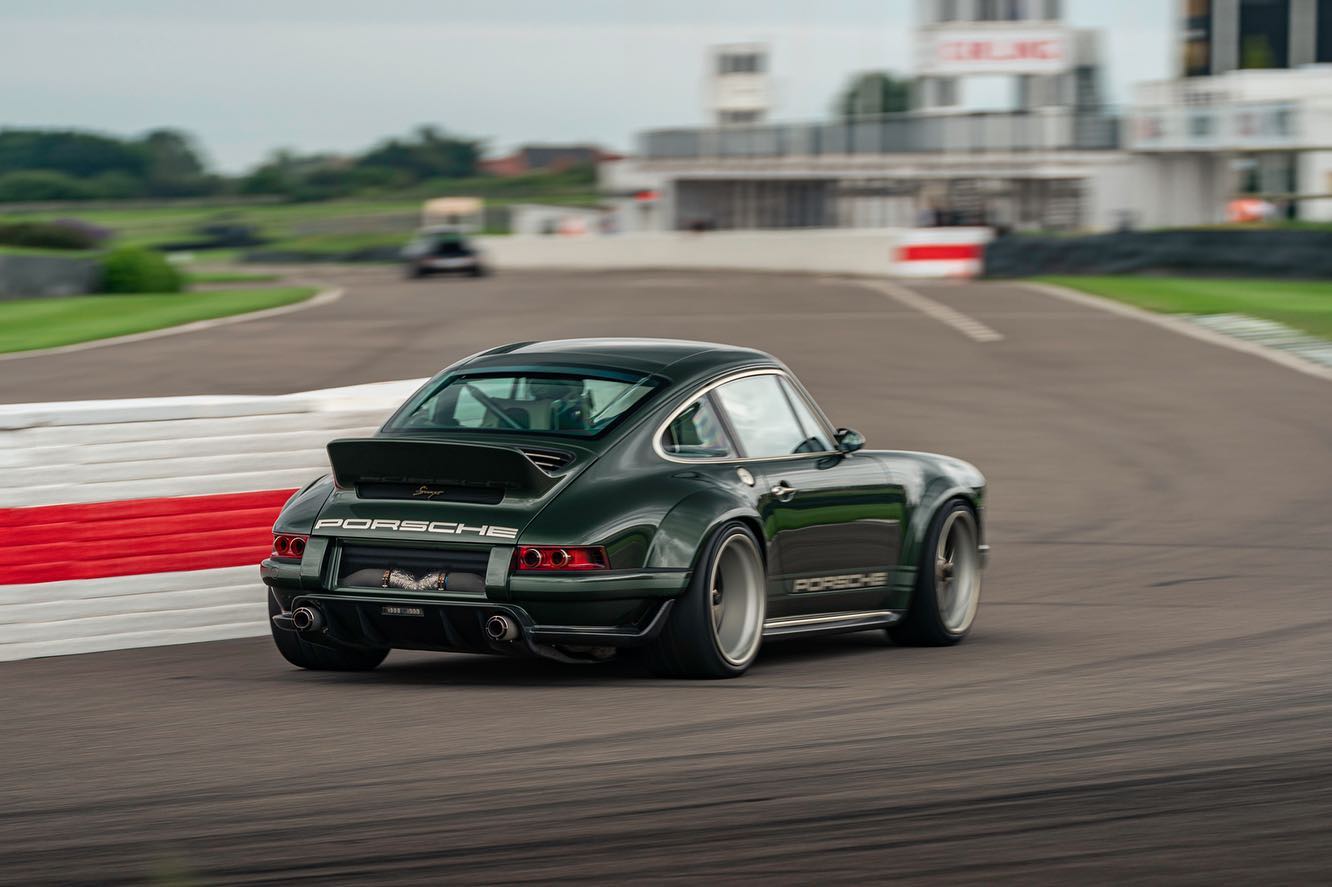 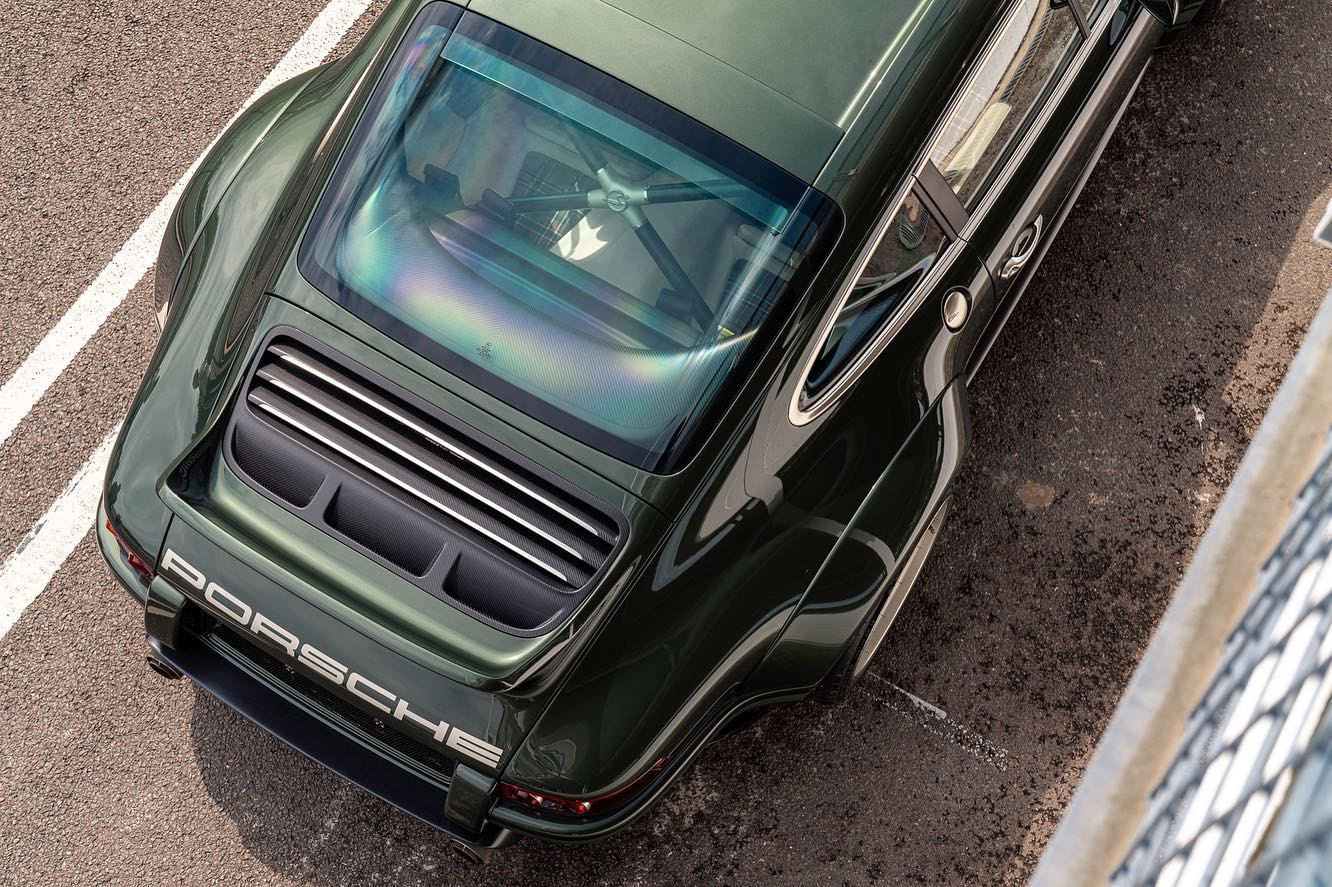 Singer’s DLS Project is simply the most advanced and fast car ever created by the brand. The basic idea is about the same as every other car created by Singer, meaning taking a vintagey air-cooled 911 (a 1990s 964 in this case) and elevating it to the max by restoring it and upgrading all components, from a carbon fibre body, a reinforced, reimagined chassis or a race-speced engine. And with the £2million DLS, which stands for Dynamics and Lightweighting Study, Singer is pushing everything to yet another level. The engine has been built by no other than Williams F1’s Advanced Engineering, resulting in the air-cooled, naturally-aspirated flat-6 to produce 500bhp and to rev up to 9,300rpm… And the rest of the car is following this, being infused with F1 technology and race-car solutions all around. We could go on and on with specs and literature, but if you want to feel what such technology means on an old-school 911, check the Top Gear video here (with the sound up to the max…)

Now, since Singer Vehicle Design (the car manufacturer) and Singer Reimagined (the watchmaker) have always worked together in the creation process, and now that the DLS concept is almost completed, it was about time for the matching watch to surface. And here it is, the Singer Reimagined Track1 DLS Chronograph, fully inspired by the eponymous car, using the same design elements, and some of its race-inspired technologies. 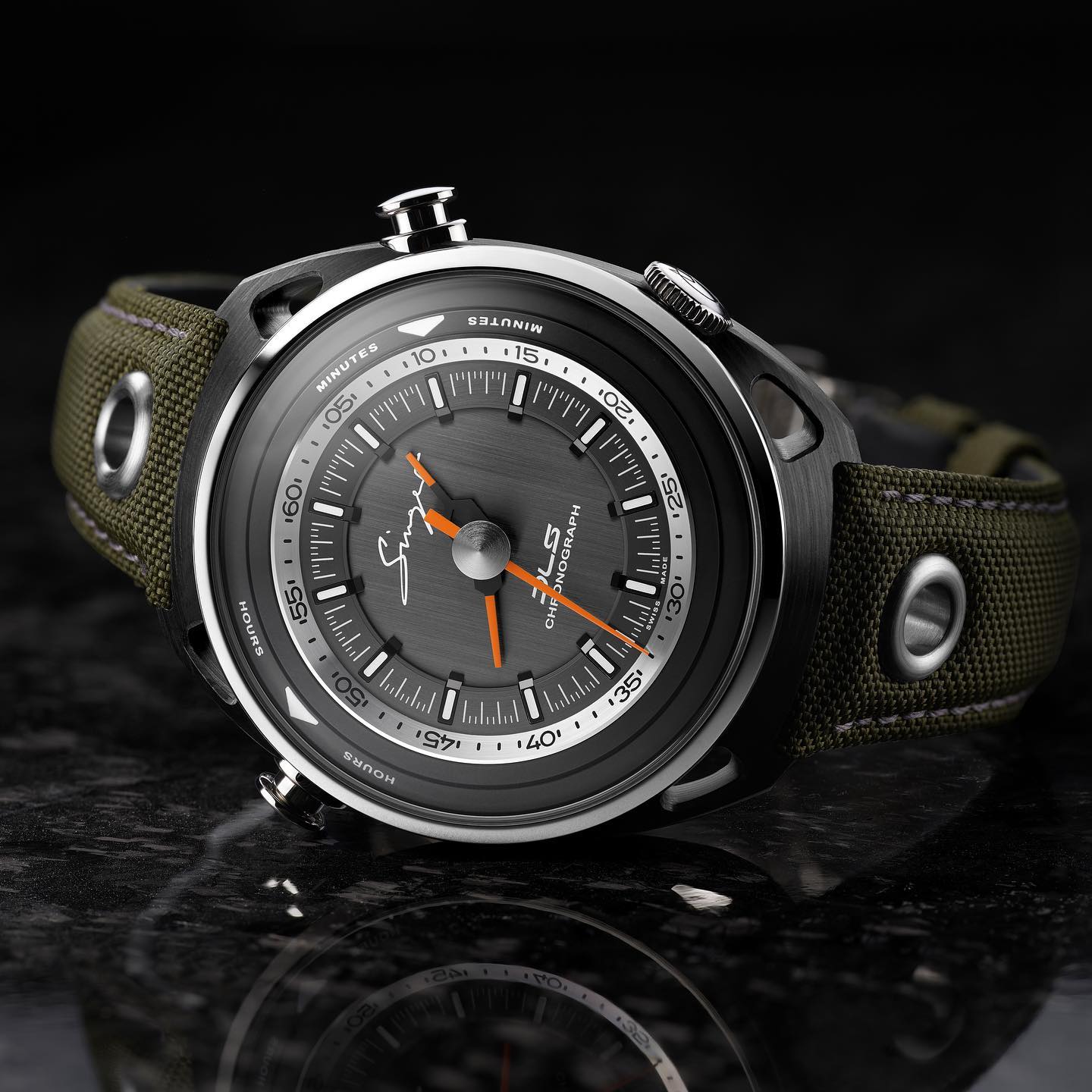 All in all, the recipe is rather well known, the watch being an evolution of other Track1 models we’ve seen in the past. Yet, to match the lightweight conception of the car, Marco Borraccino (the man at the head of Singer Reimagined) has altered the design, materials and structure of the case. Indeed, the pilot-style 1970s-inspired case is now made of lightweight forged carbon with exposed layers. Still measuring 43mm in diameter and 15mm in height, it has been lightened with cutouts at each corner. These also are also echoing the car’s lateral air-intakes. The rest of the habillage (bezel, crown, pushers, caseback) is made of polished grade 5 titanium, which can be customized with various DLC coatings, to match trims and details of each DLS cars. 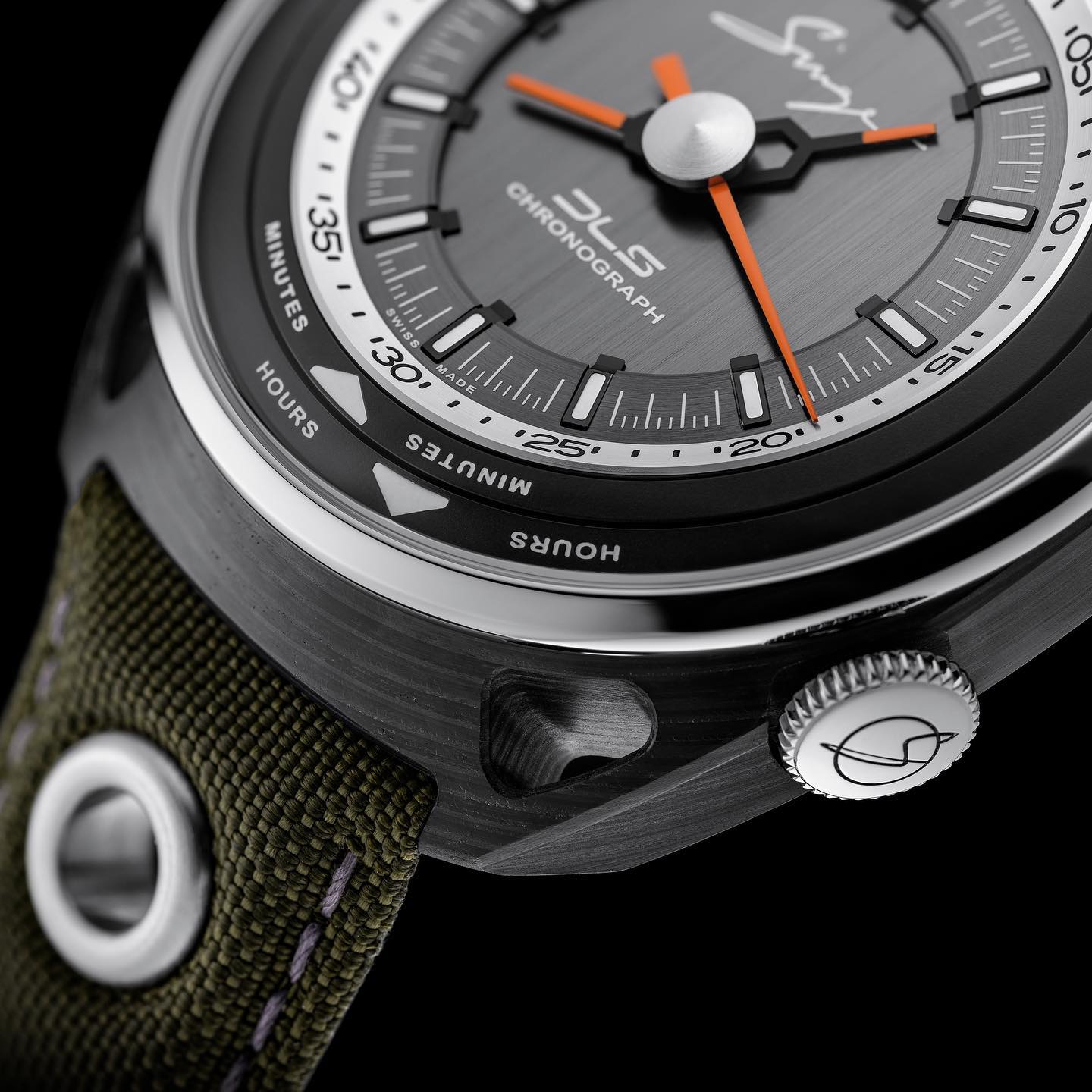 If the display remains identical, the dial also evolves with a sportier, more modern look – just like the DLS car has a more contemporary feel than other Singer cars. The recessed central part is grey and vertically brushed, and paired with a raised 60-minute/second precision track, as well as luminous hour markers. This works together with the 3 central orange hands… but, specificity of the Singer Reimagined Track1, all 3 centrally-positioned hands are devoted to the chronograph – with sweeping seconds, and instantaneous jumping hours (12-hour) and minutes chronograph hand (60-minute). As for the time itself, it somehow becomes a secondary thing in this context, with the hours and minutes displayed by peripheral discs. 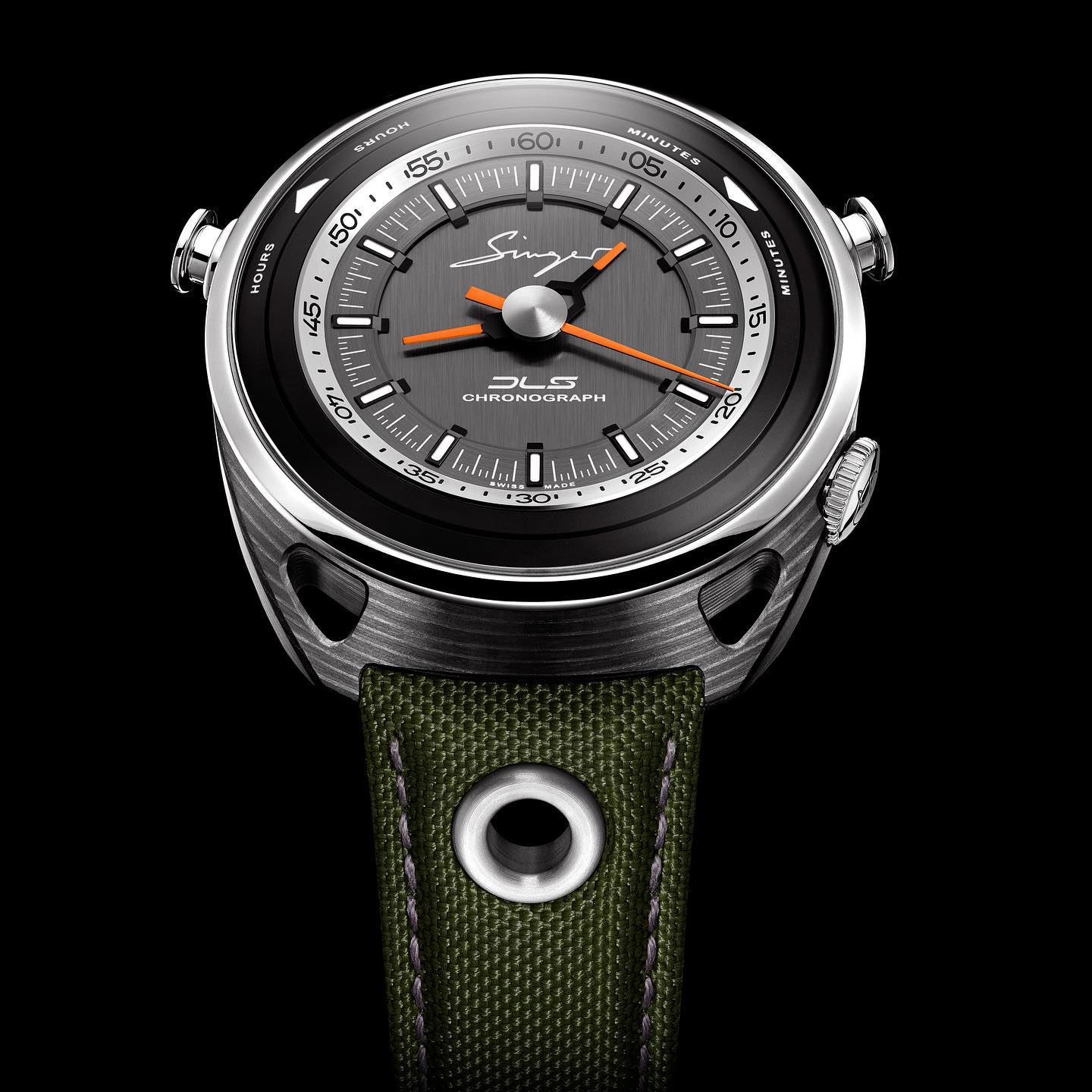 Here, the Singer Reimagined Track1 DLS Chronograph is presented with a grey dial, natural titanium elements and a green textile strap, which all match the DLS prototype car presented at Goodwood and Monterey. But, of course, all elements can be customized to match the actual DLS car owners will configure… And note that this watch will only be available to owners of the Singer DLS Project car. 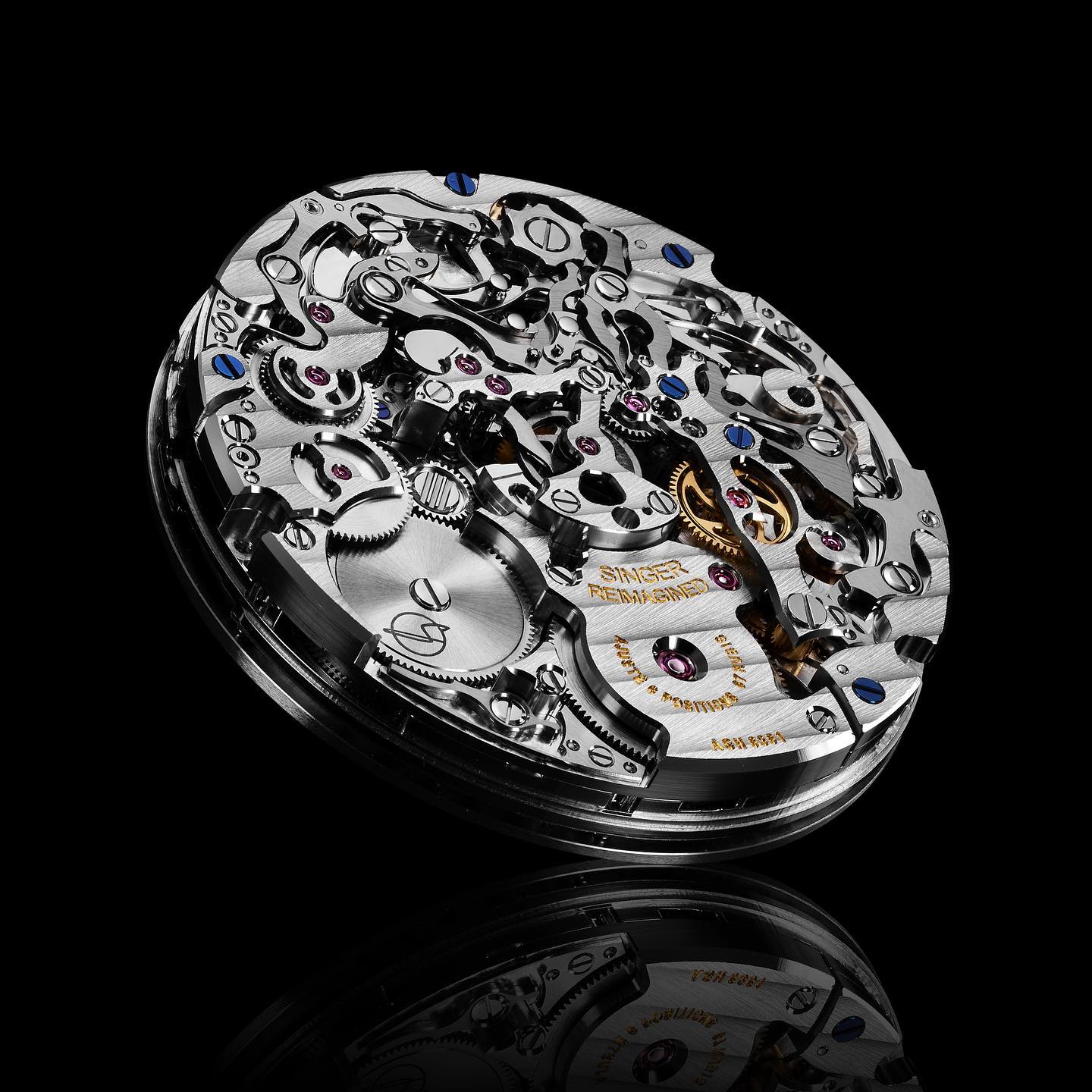 Under the hood, and visible through the sapphire caseback, is the ultra-complex and innovative Calibre Singer 6361, also known as AgenGraphe. In previous articles, here’s what we said about it:

The movement inside, created by Agenhor’s Jean-Marc Wiederrecht, is a pure technical feast. To have the chronograph displayed on the central part of the movement, Wiederrecht had to employ some serious inventiveness and multiple technical solutions that had never been used before on such a movement. Yet, not everything is entirely new, as the Calibre 6361 or AgenGraphe (the name Agenhor gave to the movement) remains an automatic column-wheel movement. However, all the rest is different or new. This revolutionary movement is based on a set of snail cams storing energy for an entire minute (or hour) before releasing it precisely when a feeler-spindle drops to generate an instant jump (which further enhances legibility). The system avoids varying forces affecting the amplitude of the movement, resulting in greater precision, as the hands always point to the desired indication. The chronograph heart also allows for the smooth resetting of the chronograph (avoiding the violent shocks of the traditional chronograph). 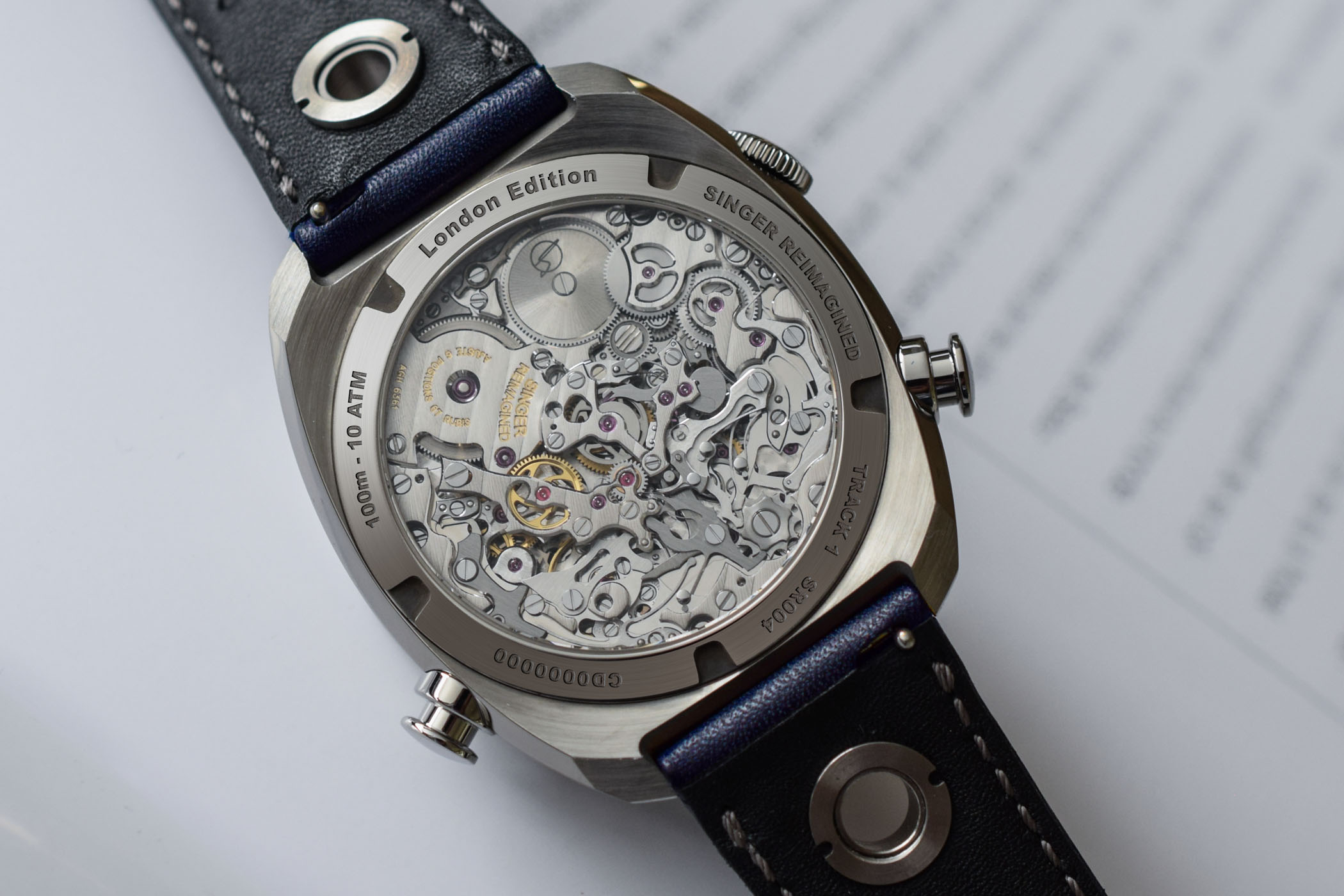 The second main innovation in the movement of the Singer Reimagined Track 1 concerns the clutch. The newly developed AgenClutch combines the best of the vertical and horizontal clutch. The coupling is made horizontally, which requires less space. Yet the connection is made by friction between teethless wheels, just like vertical clutches, thus avoiding the chronograph “stutter”. Lastly, a tulip-shaped spring provides active flexibility, maintaining the contact between the two wheels whilst ensuring that, in case of a shock, the security wheels are still effective. Finally, this movement is automatic, something that you can’t imagine at first due to the absence of a visible rotor – or micro-rotor – on the movement side. In fact, the movement is classically wound by a central rotor, which is positioned dial-side. This was possible simply because of the central chronograph hands – meaning that the rotor can turn around the central axis.

The Singer Reimagined Track1 DLS Chronograph is only available through a customization program, and to Singer Vehicle Design owners. Price upon request. For more details, please visit singerreimagined.com.