When it comes to true tool watches, few can rival the purposefulness of a military-issued model. Simple, made for action, robust, ultra-focused on its mission – which is, most of the time, delivering precise indication of the time and nothing more – military watches are an object of the past that still fascinate many enthusiasts. And, among all these timekeeping objects, the watches delivered to the British MoD might well be the most attractive. Last year, a brand that was once part of the famous “Dirty Dozen” has been revived, as well as its inaugural re-edition watch. Following this initial Timor Heritage Field WWW, the brand now looks at another important model, the watch that was adopted by the British in the 1930s under the Army Trade Pattern. Here’s the new Timor Heritage Field ATP Watch.

Most of us are certainly aware of the story behind the W.W.W. or “Watch Wristlet Waterproof.” In order to provide its troops with a reliable piece of equipment to be used on the field, the British Ministry of Defense (the MoD) set specific criteria for a watch that could withstand the hellish rigours of World War II. For that, the MoD turned to twelve watch manufacturers, including Timor. These brands manufactured these watches that are now known as the Dirty Dozen and are among the most emblematic military watches ever issued. These simple, reliable watches were all about surviving the action of the war and featured a black dial with luminous hands and markers, entirely focused on providing a clear indication of the time. But there were more watches than just the W.W.W.

We have to turn to another important model, the so-called ATP watch. After WWI, the British War Office decided to develop the first general-purpose wristwatch for the Army. These would replace the various pocket watches, and homemade trench watches most soldiers were using. The original Army Trade Pattern watches were first issued to soldiers in 1938.

Today, Timor brings a new model directly inspired by the first-ever military watch adopted by the British in the late 1930s under the Army Trade Pattern. And, unsurprisingly, the watch is named the ATP. This new model, again a typical military-inspired timepiece, is based on the existing work done with the Timor Heritage Field WWW. However, to remain consistent with the specifications defined by the British War Office, the new model shows some major differences. 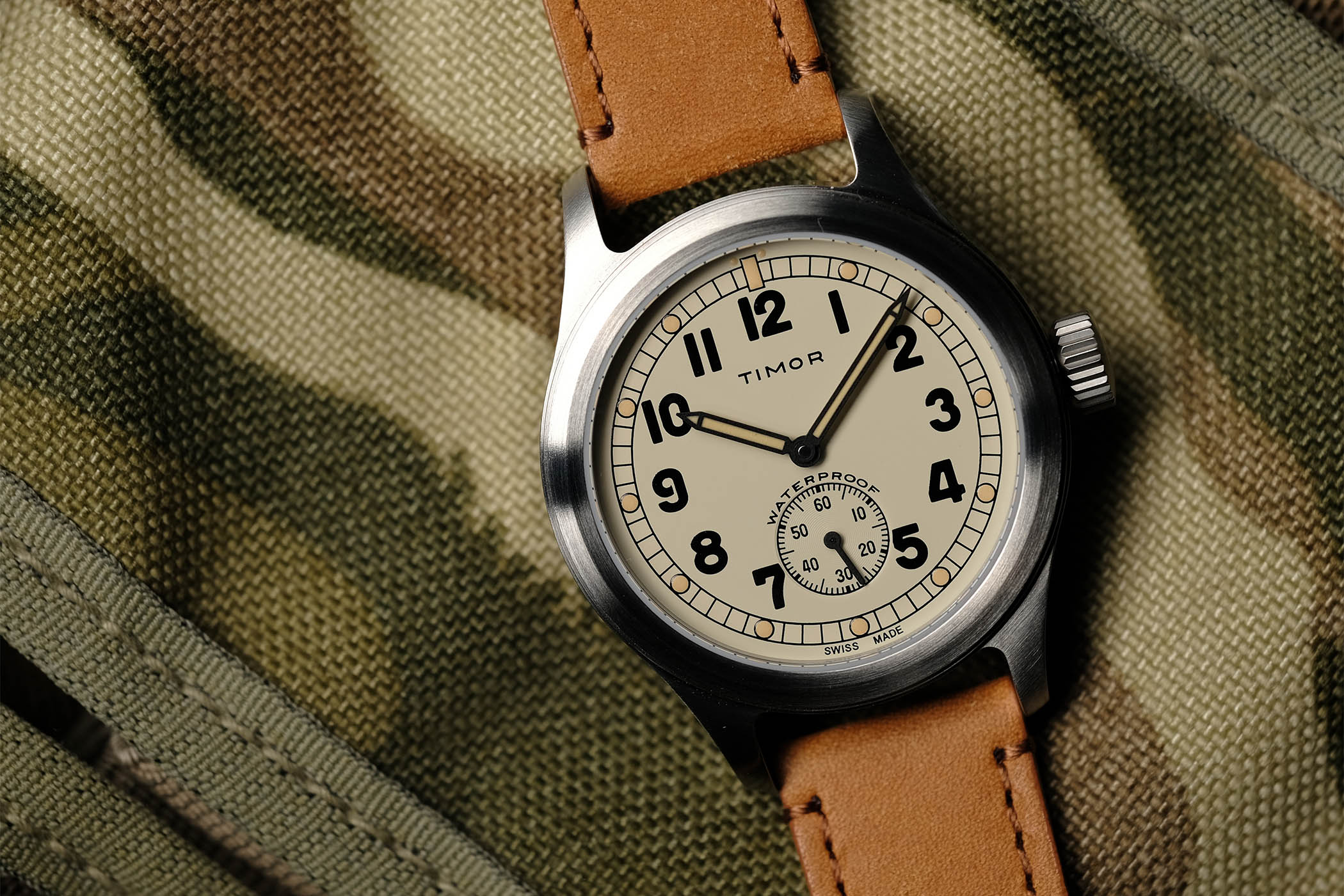 The case of the Timor Heritage Field ATP is shared with the WWW watch, meaning historically-relevant proportions and a typical no-nonsense construction made to last. Crafted from stainless steel, it measures a compact 36.5mm in diameter and 11mm in height. Lug-to-lug measurement is only 45.5mm and the case features a domed sapphire crystal on top, a screwed steel back and is water-resistant to 50 metres. The main difference between the WWW and the ATP is the finishing, as the bead-blasted surface has been replaced by a classic brushed finishing. 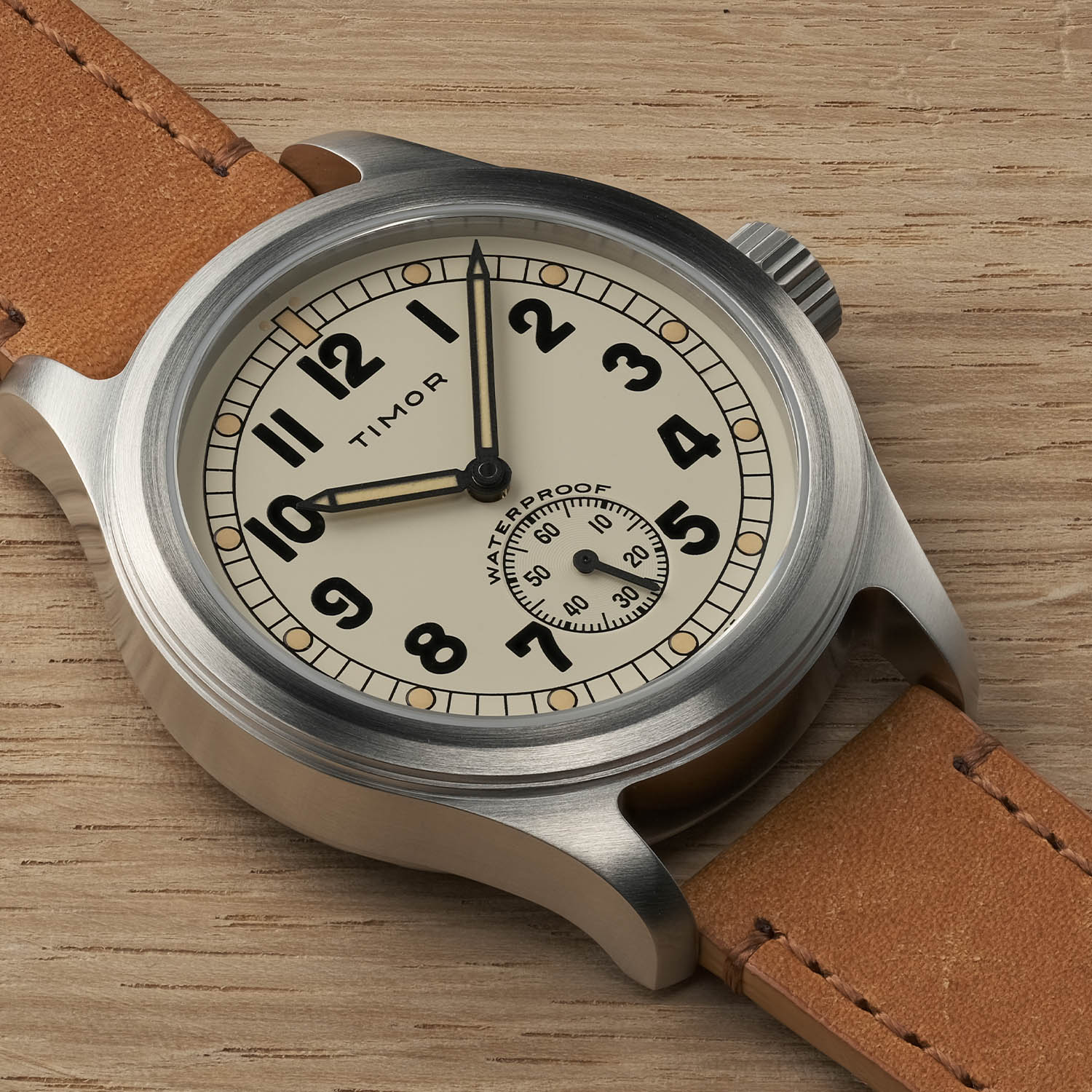 The second evolution concerns the dial, which has been updated both in colour and layout. The most obvious difference is the cream base colour, in lieu of the traditional black found on watches from the Dirty Dozen. Also, all the elements have been resized and redesigned. The railroad minute track is wider and features newly-shaped luminous plots. The Arabic numerals, in contrasting black, are also larger than those of the WWW model. The small seconds counter is now smaller, features numerals and is topped by a waterproof mention. Also, no pheon or broad arrow mark on this model. Finally, all indications are picked up in beige Super-LumiNova, including the hands that are now black-coated. 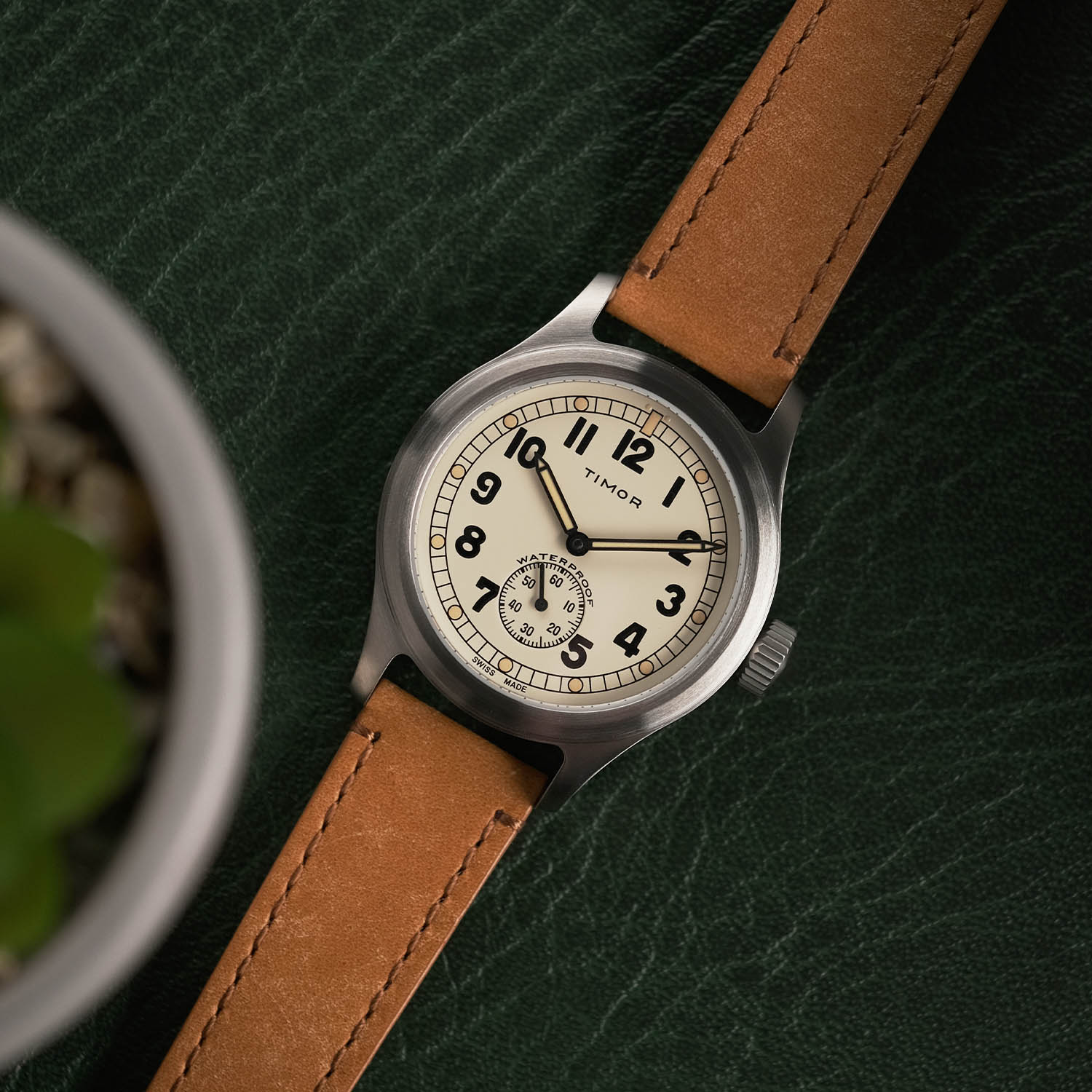 As with the WWW, this new Timor Heritage Field ATP is available with 2 different movements. First is the automatic Sellita SW260, the small seconds version of the ubiquitous SW200. The other option is the Sellita SW216, a hand-wound movement also with small seconds counter. Both run at a 4Hz frequency and store approximately 40/42 hours of power reserve. The choice of movement has no impact on the size of the case or the position of the sub-counter. 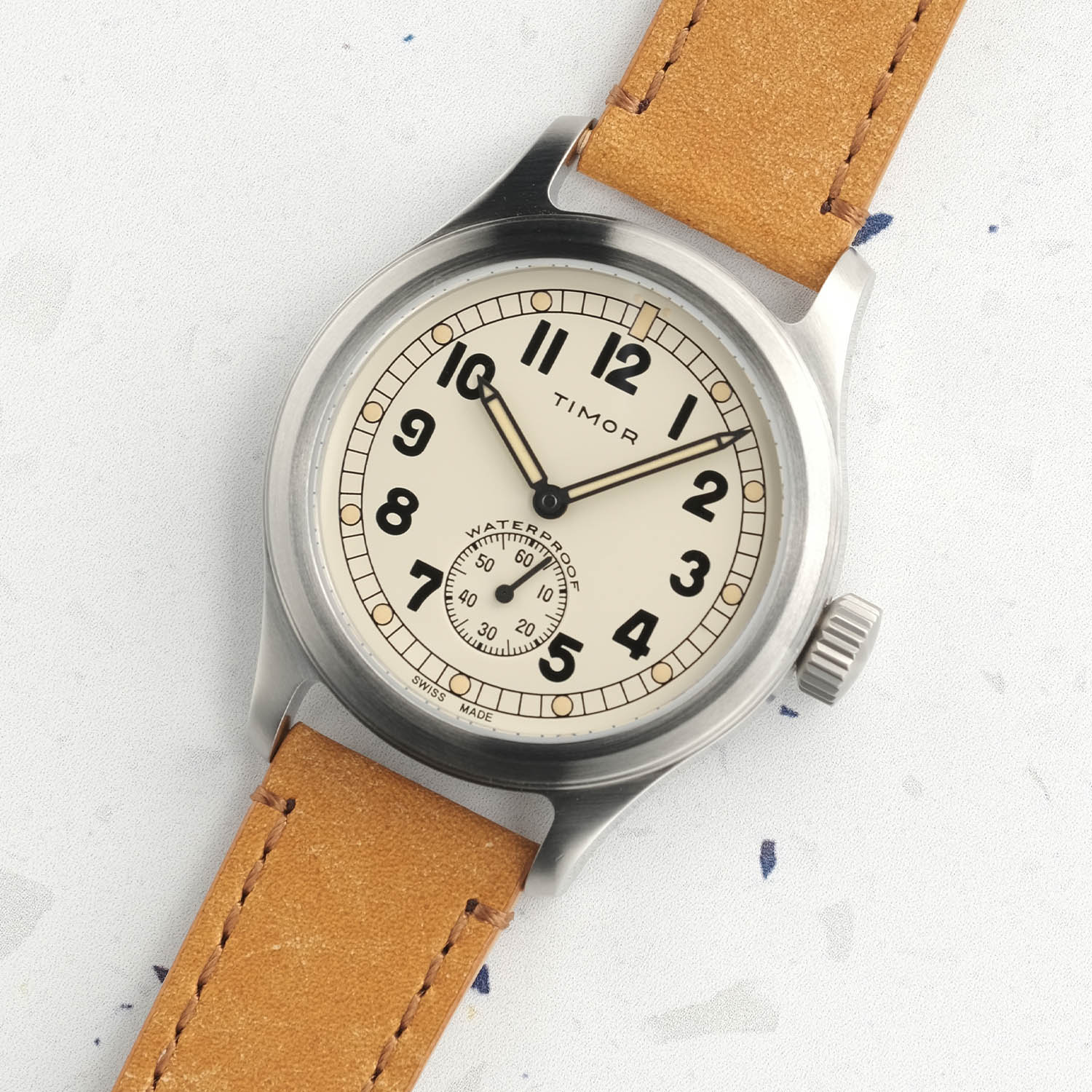 The Timor Heritage Field ATP is worn on a light brown leather strap with s steel pin buckle. It is now available from the brand’s website here, at a price of GBP 1,100. Note that this year’s batch is available in automatic and hand-wound and limited to 50 of each.