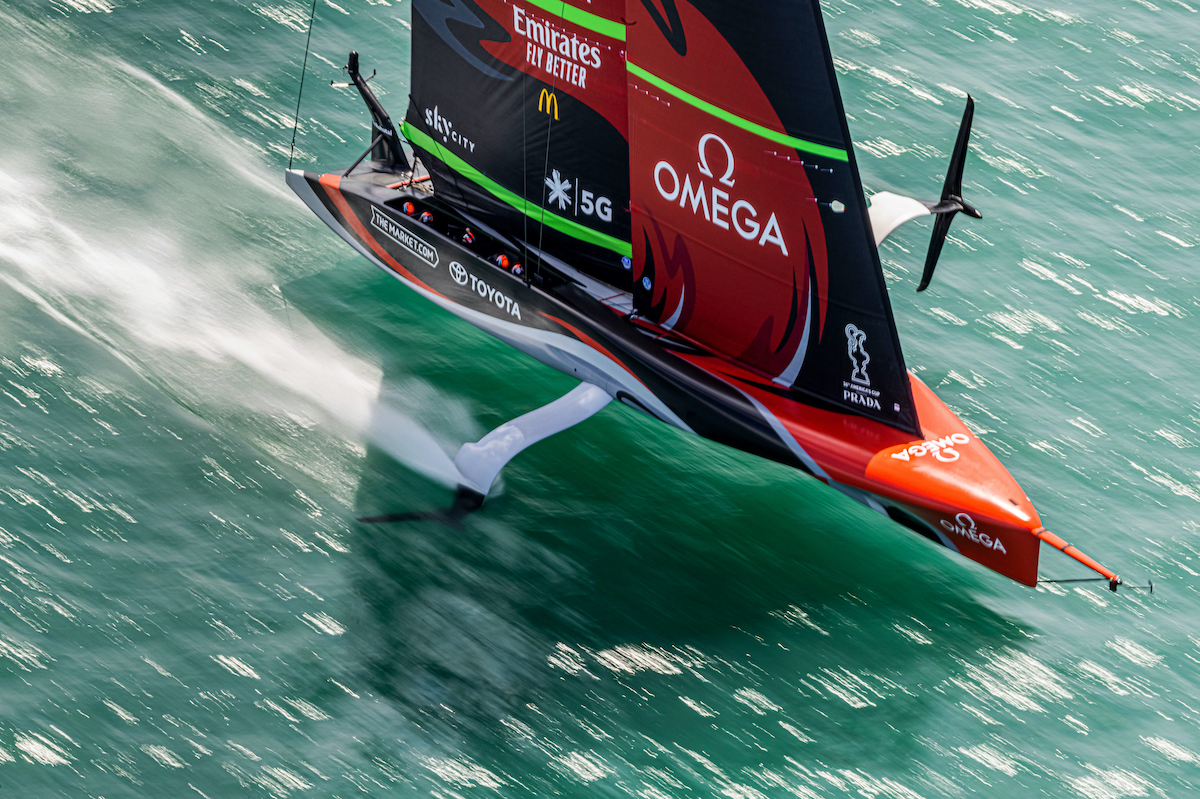 With the pandemic keeping everyone locked inside, it’s hard to imagine that the America’s Cup sailing races are taking place right now in the waters off New Zealand. This is the final weekend of racing and right now it is Omega against Panerai. Sort of.  Omega is the Official Timekeeper of the America’s Cup and of the Defending  Emirates Team New Zealand boat. Meanwhile, Panerai sponsors the challenger, Luna Rossa. Already in day two of the matches, the two teams are pretty evenly matched, as Emirates Team New Zealand defends the cup it won in 2017.

To celebrate these roles, both brands are creating special timepieces. Omega has launched  the Seamaster Diver 300M America’s Cup Chronograph. Similarly, when Luna Rossa Prada Pirelli won the Prada Cup, making the team the challenger for the 36th edition of the famed Cup,  Panerai was already on board as a sponsor. It is a fitting partnership since both the Italian team and Panerai have Italian roots.  Panerai has created and will continue to create an entire collection of watches honoring the relationship.

The Seamaster Diver 300M America’s Cup Chronograph, which retails for $10,700.00, is equipped with a new chronograph lock system, quick-change strap and soft rubber water-grip pushers. It is crafted in stainless steel with a blue ceramic dial and bezel ring with white enamel diving scale. The 44mm watch features a laser-engraved wave-pattern dial that includes a regatta countdown indicator ring in red anodized aluminium. The small seconds hand is inspired by the shape of a boat hull. The central seconds chronograph hand, also in red anodized aluminium, carries an America’s Cup on the counterweight.

The red, white and blue beauty boasts Omega’s Chrono Lock system that secures the chronograph functions while on the water. The caseback is engraved with blue lacquer spelling out “36th America’s Cup” and “Auckland 2021.” The watch is powered by Omega’s Co-Axial Master Chronometer Caliber 9900. 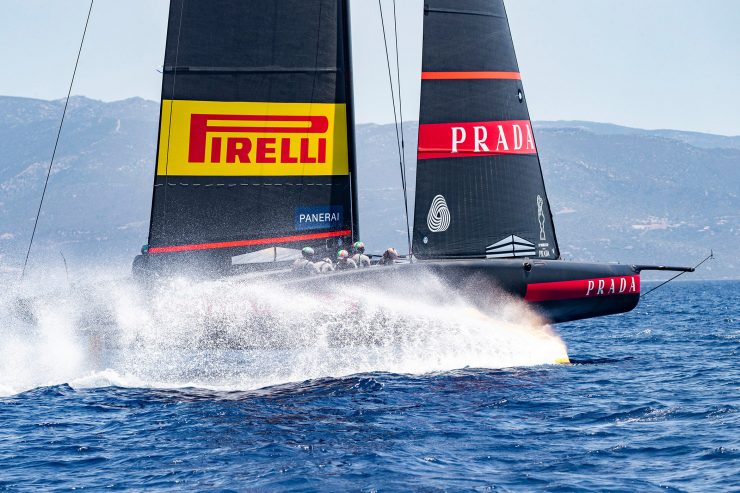 The standout timepiece of the four – since we are talking about racing – is the Luminor Luna Rossa Regatta watch with  automatic movement and Incabloc anti-shock devise. The movement consists of 328 parts  and boasts two barrels, a flyback chronograph and the regatta countdown function. It is crafted in Carbotech with a Carbotech bezel and is water resistant to 100 meters. It retails for $24,200. 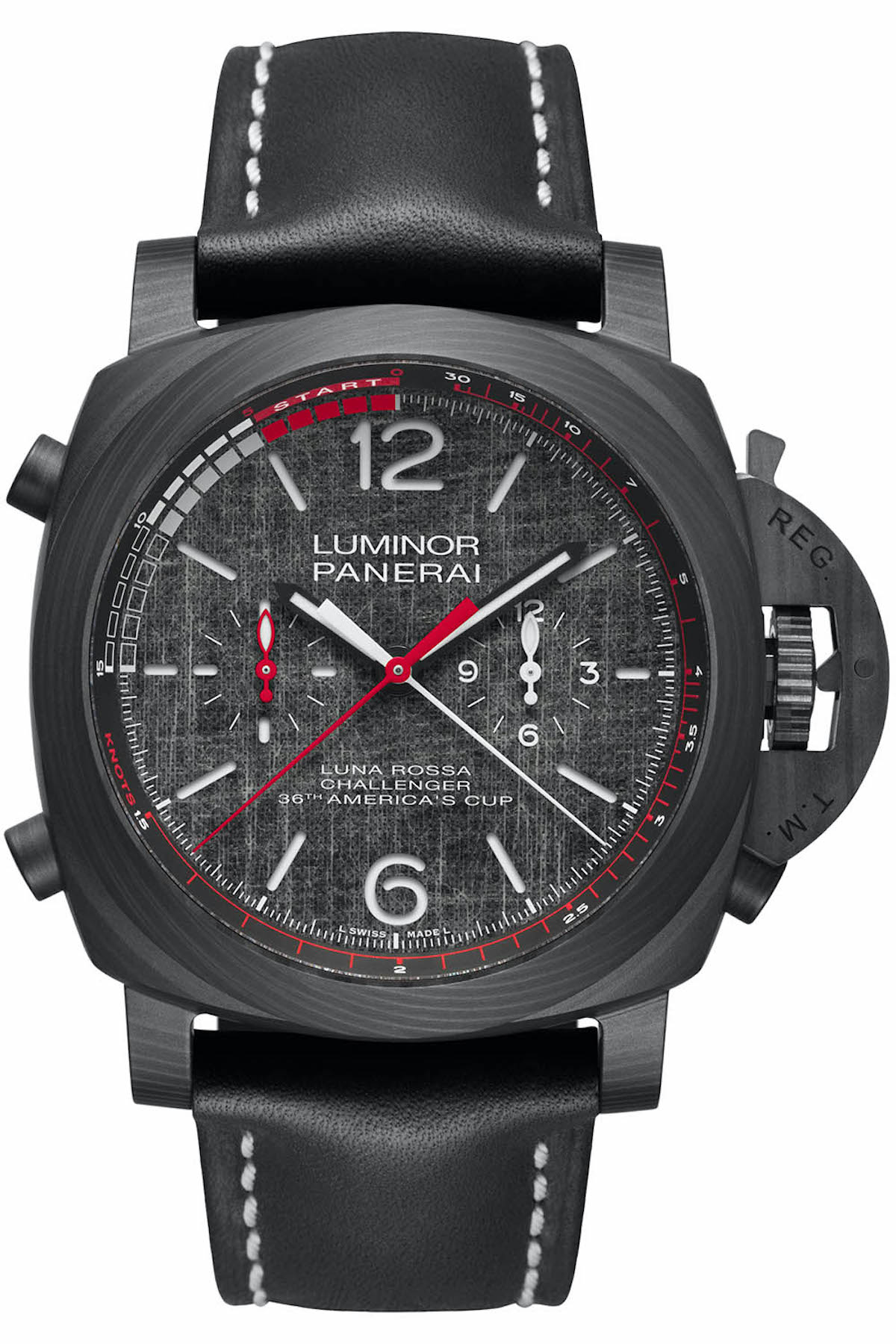