Turning 85 has rarely looked this good.

On Thursday, Panerai celebrated the 85th anniversary of both its Radiomir watch and the brand’s iconic yacht, Eilean, by releasing a new reference, the Radiomir Eilean, set to be produced in limited quantities each year. The watch is housed in a 45mm cushion-shaped case that features the brand’s special “patina steel” treatment, designed to make the case look like it’s been gently worn for decades right out of the box.

It’s a striking tribute to the original Radiomir, created in 1936 as a diving watch for members of the Italian Royal Navy. (The reference takes its name from a patented radium paste the company developed to help make its military-grade tools more legible.) The latest Radiomir is powered by a hand-wound mechanical P.6000 calibre movement that offers 72-hours of power reserve. It’s water-resistant to 10 ATM (100 meters, or 330 feet) and is equipped with Incabloc anti-shock protection to support the balance wheel—just in case the watch is dropped or suffers other impacts. SuperLuminova applied to the hands and indexes glows a bright green in the dark, mimicking the functionality of the original watch. 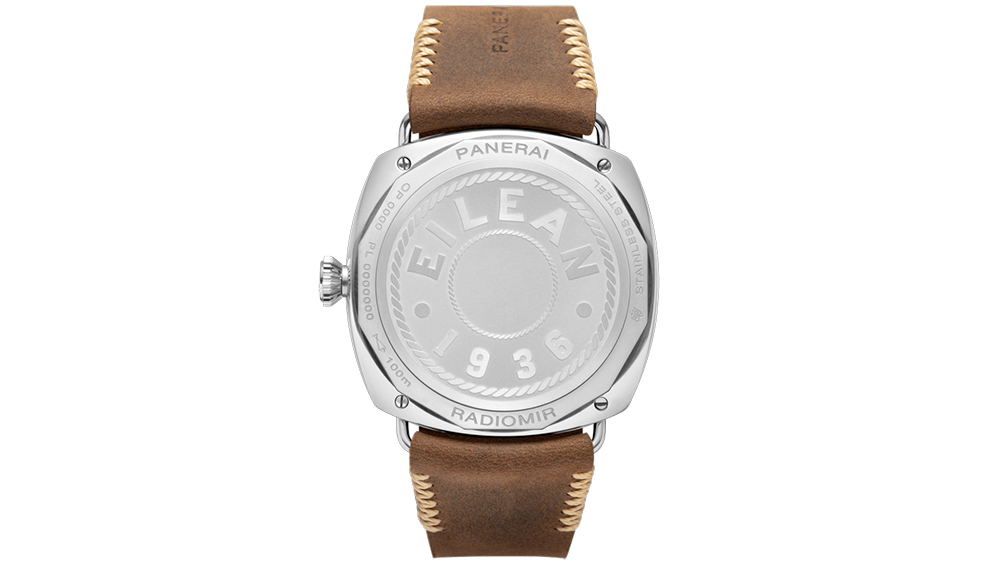 The stainless steel back of the limited-edition timepiece.  Panerai

The yacht this watch is named after also hit the water 1936, but Panerai didn’t acquire Eilean until 2006. The yacht was designed and built in Scotland by William Fife III, one of the most acclaimed yachtbuilders in history. After changing hands for 70 years (at point starring in the music video for Duran Duran’s “Rio”,) Eilean was purchased and restored by former Panerai’s former CEO Angelo Bonati. It now travels the world as something of a silent ambassador for the brand.

Tying the two symbols together, the Radiomir Eilean’s dial features striations and a variegated brown finish that evokes the yacht’s teak deck, while the caseback bears an inscription that reads “Eilean 1936” and is identical to one located on the ship’s boom.

The limited-edition timepiece, which retails for $9,650, will be available in 449 examples each year, reflecting the boat’s sailing number. Visit Panerai.com for more information.