The new Patek Philippe Nautilus with an olive green-dial may just be the hottest watch release of 2021. And now a never-before-worn example is heading to auction.

Antiquorum will offer up a Ref. 5711/1A-014 Nautilus as part of its Important Modern & Vintage Timepieces sale later this month in Monaco. Not only will the winning bidder end up with one of the most desired watches of the year, they’ll also get an example that comes sealed in a bag, meaning it hasn’t been touched since leaving the factory.

Ref. 5711/1A-014 was introduced earlier this year as a replacement for the Ref. 5711/1A-010—the discontinued version with a blue dial. The idea was that the new watch would help tamp down the outrageous secondary market for the Nautilus. So much for that. Less than three months after its release, the green dial is all but impossible to find and selling for up to 10 times its $34,893 retail price. They’re so in-demand that not even being related to Patek Philippe president Thierry Stern can help you get your hands on one.

“Even my sons are asking, ‘Can I have one?’,” Stern recently told WatchPro. “But the answer is no. On the positive side, though, it’s part of the beauty and myth of Patek Philippe.” 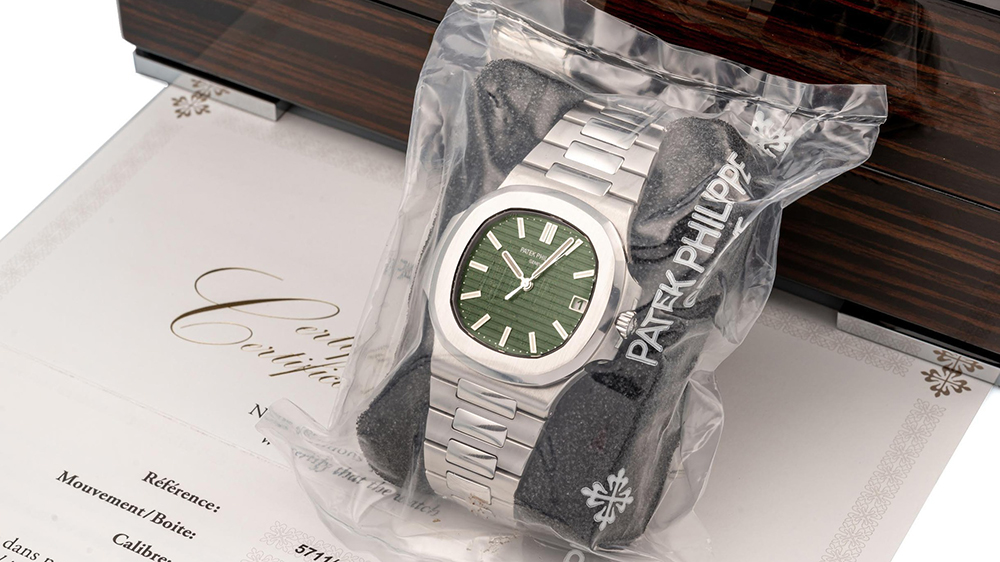 It’s easy to see why there’s so much demand for the watch. The olive green sunburst dial really helps this Nautilus stand out. The gorgeous dial is accented by luminescent hands and white gold hour markers, while the stainless-steel case and bracelet feature both satin brushing and polishing. The timepiece is also water-resistant up to 120 meters and powered by a self-winding caliber 26-330 S C mechanical movement.

This lot isn’t just noteworthy because of the watch, though, as hard to come by as it may be. The example being sold is still sealed in its factory plastic, a condition that’s incredibly rare. In 2017, the watchmaker banned authorized retailers from selling its watches this way—to indicate that Patek Philippes are supposed to be worn, not just collected. It would seem that someone has chosen to ignore this rule.

Antiquorum will auction off the Ref. 5711/1A-014 Nautilus on July 21. The timepiece has a pre-sale estimate of $60,000 to $180,000, but considering what this watch is going for on the open market and the condition it’s in, we wouldn’t be surprised if it goes for well north of that.