Working closely with the world’s most famous spy in cinematic history, currently portrayed by Daniel Craig, Omega has created a rather unique Seamaster Diver 300M. The new 007 Edition – which is non-limited by the way – looks and feels completely different from the regular Seamaster Professional series. And that is a good thing because a man of his stature deserves something special right? So without further ado, let us take you through all the details of the Omega Seamaster Diver 300M 007 Edition. 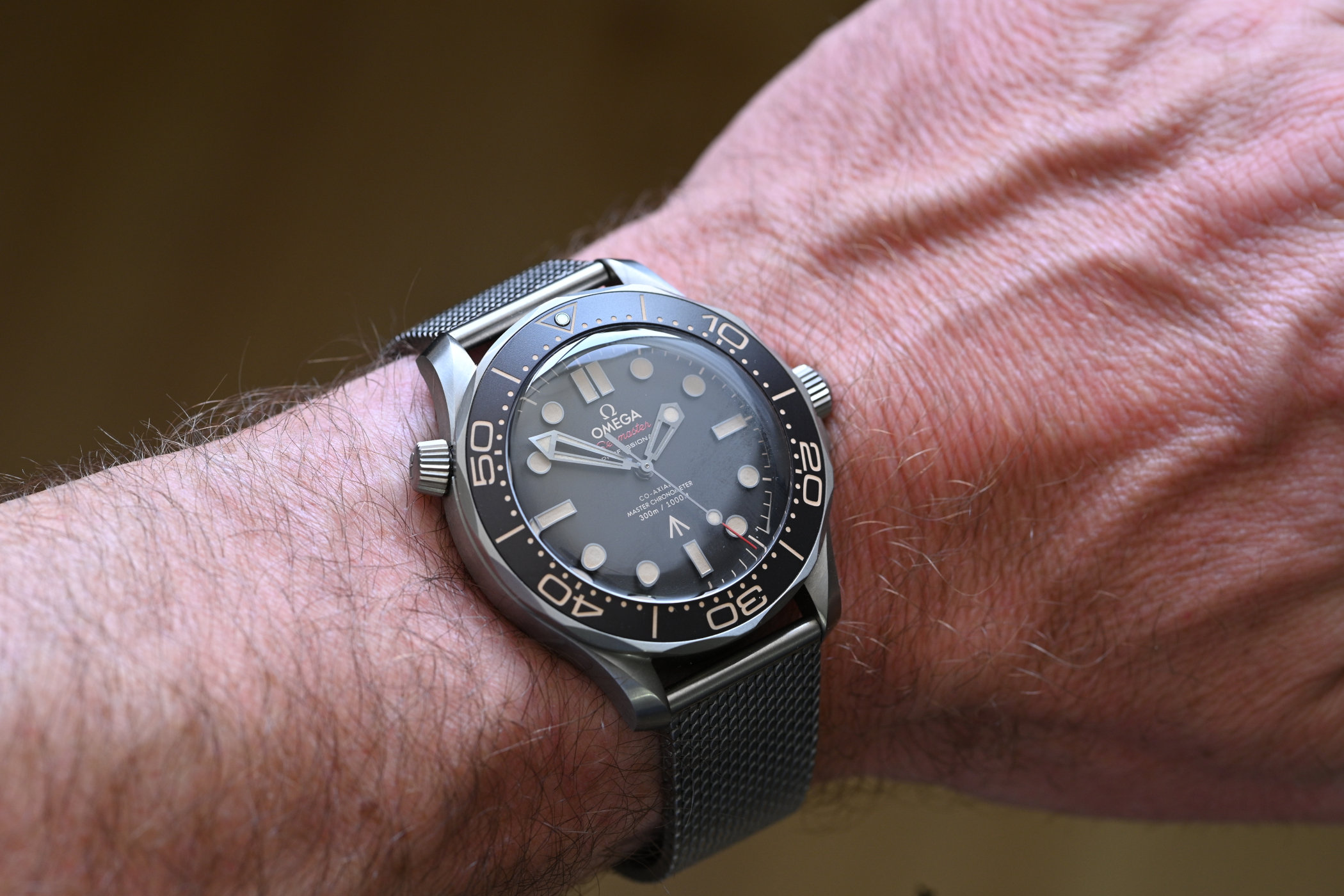 I vividly remember growing up with the James Bond movie franchise. Being a “kid of the eighties” meant that many films came before I was born, and many have come since, but I’ve watched them all several times over. One thing that stands out most to me, besides the obvious taglines, is the gadgets (and the cars of course). In almost every movie, the Q-branch of MI6 plays a major role in James Bond’s missions, supplying him with the necessary state of the art equipment, often disguised as everyday objects. And one of those objects is usually a watch, and that’s where we come in. 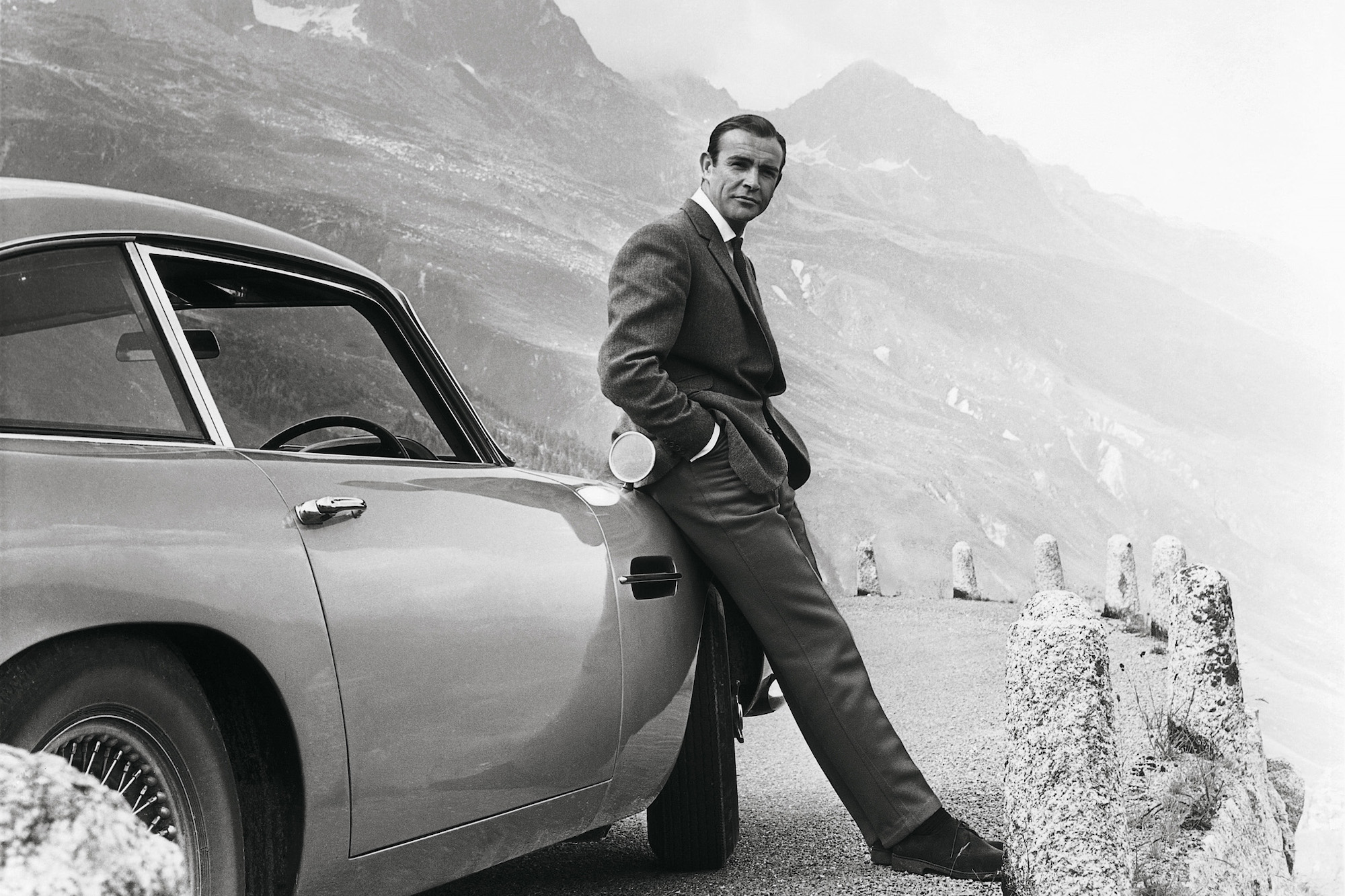 Omega has had an extensive history with the James Bond franchise, although it is not the only watchmaking company that has been involved. The connection between Omega and the movies started back in 1995, with the introduction of the Omega Seamaster 300M Quartz Professional, strapped to the wrist of then-Bond actor Pierce Brosnan in GoldenEye. The following three movies all featured similar Omega Seamaster 300M models only this time using mechanical movements.

When Daniel Craig took up the humongous task of portraying James Bond, Omega stayed on as a partner to the franchise. In Casino Royale Bond had a Seamaster Diver 300M Co-Axial and a Seamaster Planet Ocean 600M at his disposal. The Planet Ocean 600M would stay on for Quantum of Solace, albeit in a smaller size. In Skyfall, the Planet Ocean 600m was joined by a Seamaster Aqua Terra 150m. A big change came in 2015 when Omega decided to create a dedicated piece for Mr. Bond to be used in Spectre, the Seamaster 300 Master Chronometer Spectre Edition.

The full rundown of the 20 years of partnership between the franchise and Omega, including the Spectre movie, can be found here. There’s also this retrospective focusing specifically on the Omega Seamasters used in James Bond movies. The final movie in the long-lasting saga is No Time To Die, which has been postponed several times due to Covid-19 but is scheduled to premiere in cinemas on the 30th of September.

Now, we’ve featured this particular watch before but since the 25th James Bond movie is close upon release, we thought we’d revisit it again and provide another detailed review. If we take a close look at the Omega Seamaster Diver 300M 007 Edition, a few things stand out. First off is the choice of materials. Omega has decided to use unpolished, untreated Grade 2 Titanium for a utilitarian, military-type look.

While certainly not the first Seamaster 300M to feature the lightweight, anti-corrosive material, seeing it in its natural state is quite impressive. Of course, being a Seamaster means lyre lugs, a helium escape valve, and a screw-down crown nestled in between crown guards. Compared to other Seamaster Diver 300M models, it is a lot less shiny. And to an extent that also implies for the bezel and dial.

Speaking of which, the dial and bezel feature a deep brown base that almost looks black. Free of the decorative waves engraved on the dial, the 007 Edition sticks to its utilitarian theme throughout. The hour markers, as well as the markings on the aluminum bezel insert and the hour hands are done in a “Tropical” style.

This means the typically styled hands are done in a matte finish with crème/beige luminous material. The lume shines in different colors in darker circumstances. This will undoubtedly be quite useful on an actual dive, but given that most of these watches will endure the odd bit of desk-diving only, it feels somewhat messy and unnecessary. 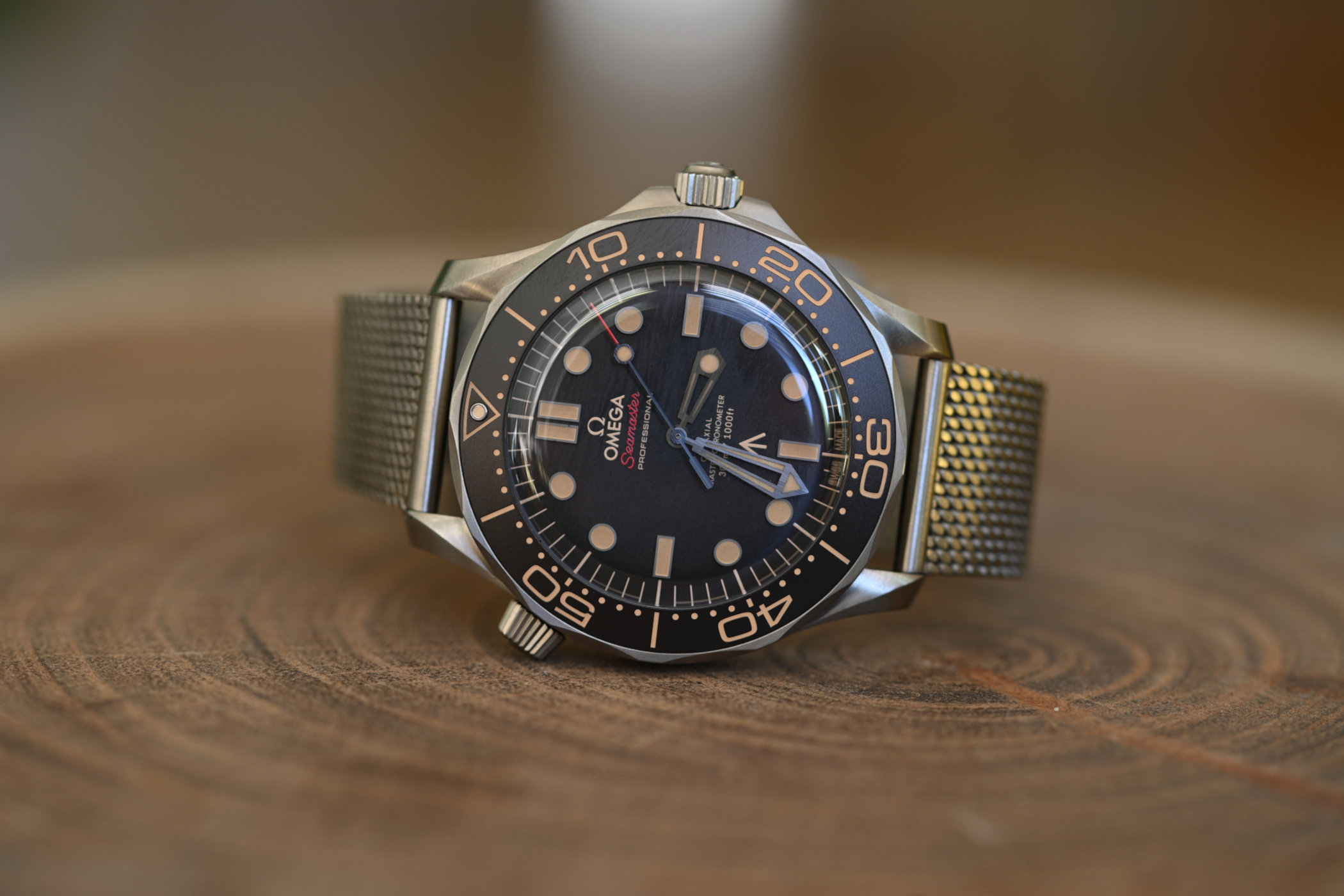 The same “Tropical” style is applied to the graduations on the bezel, and subsequently the hour markers. The sweeping lollipop seconds hand has a red tip, for contrast. A nice touch is that Omega kept the dial free of any intrusive 007 brandings, something the Omega Seamaster Diver 300M – The James Bond L.E. Set introduced in 2019 received quite a bit of feedback for. Instead, the famous double-O-seven and Walther PPK logo subtly adorns the closed caseback only. 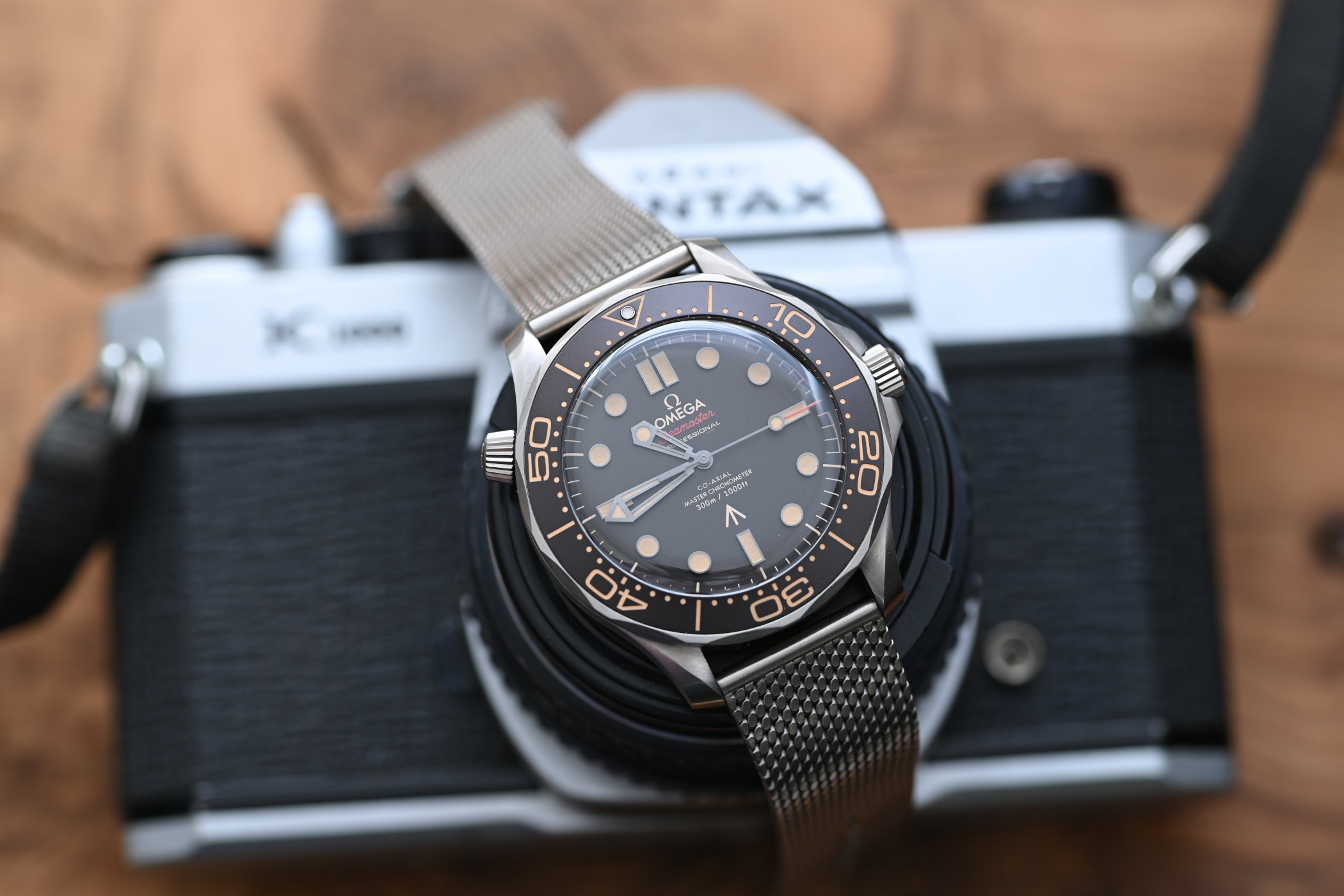 Mr. Bond himself, or anyone who fancies owning this particular watch, can rely on Omega’s in-house Calibre 8806 movement. Naturally, this comes with Master Chronometer certifications issued by METAS. Although obscured from view, this automatic movement is finished very nicely, similar to what we find in the recent Black Black edition of the Seamaster 300m for instance. The movement is regulated with the co-axial escapement and free-sprung balance wheel with silicon balance spring. It uses a single barrel, capable of storing up to 55 hours of power. The caseback is locked in place with the NAIAD locking system and is finished with a navigational arrow and the reference number. 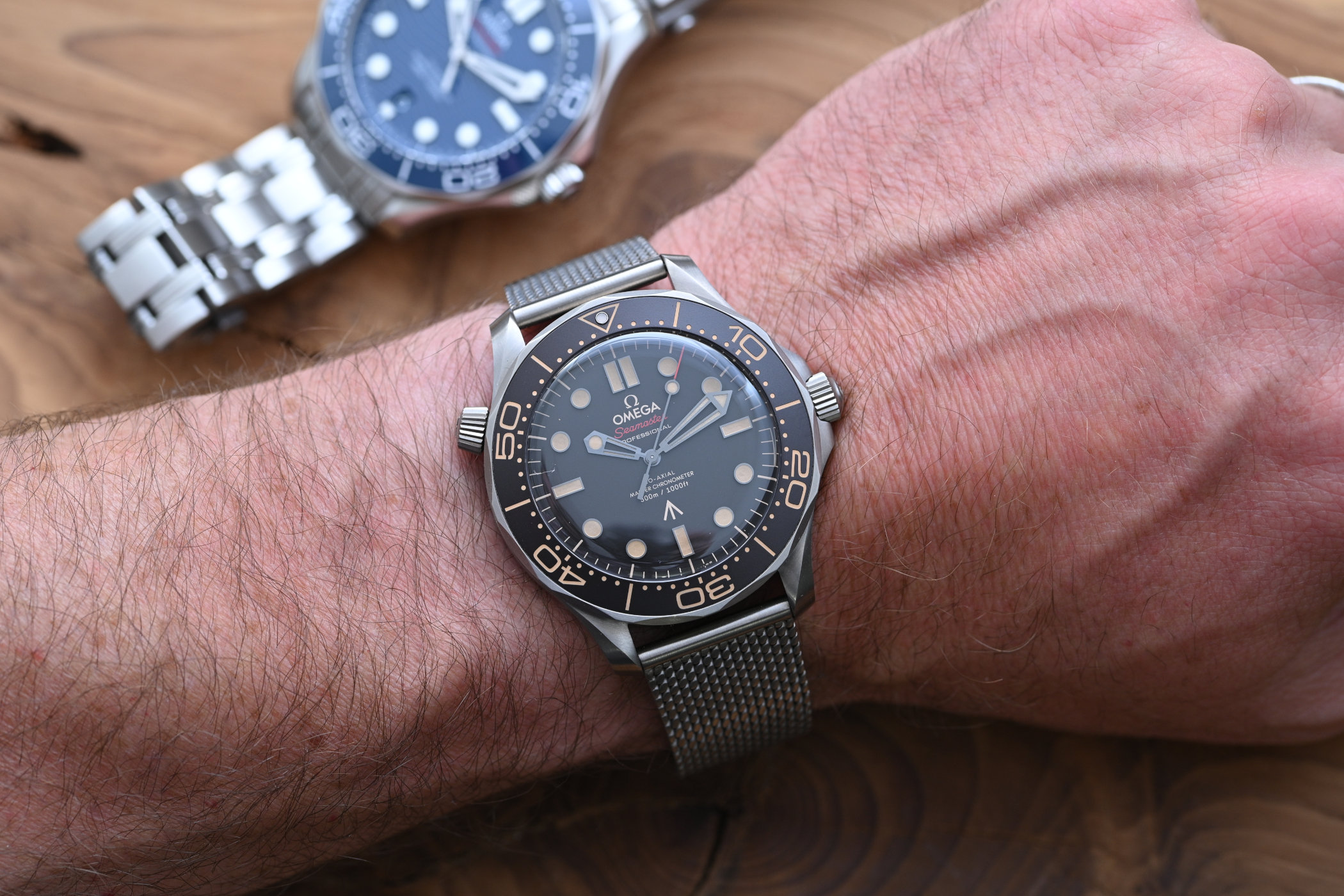 The Omega Seamaster Diver 300M 007 Edition comes on either a titanium mesh bracelet or a Bond-style NATO strap with titanium hardware. The latter has alternating black, beige and grey stripes. There’s one thing on the bracelet we’d like to address though and that is however tied in it may look, it feels a little bit like an aftermarket alternative. It’s almost like it’s not designed to go with it initially, despite it being very comfortable on the wrist. 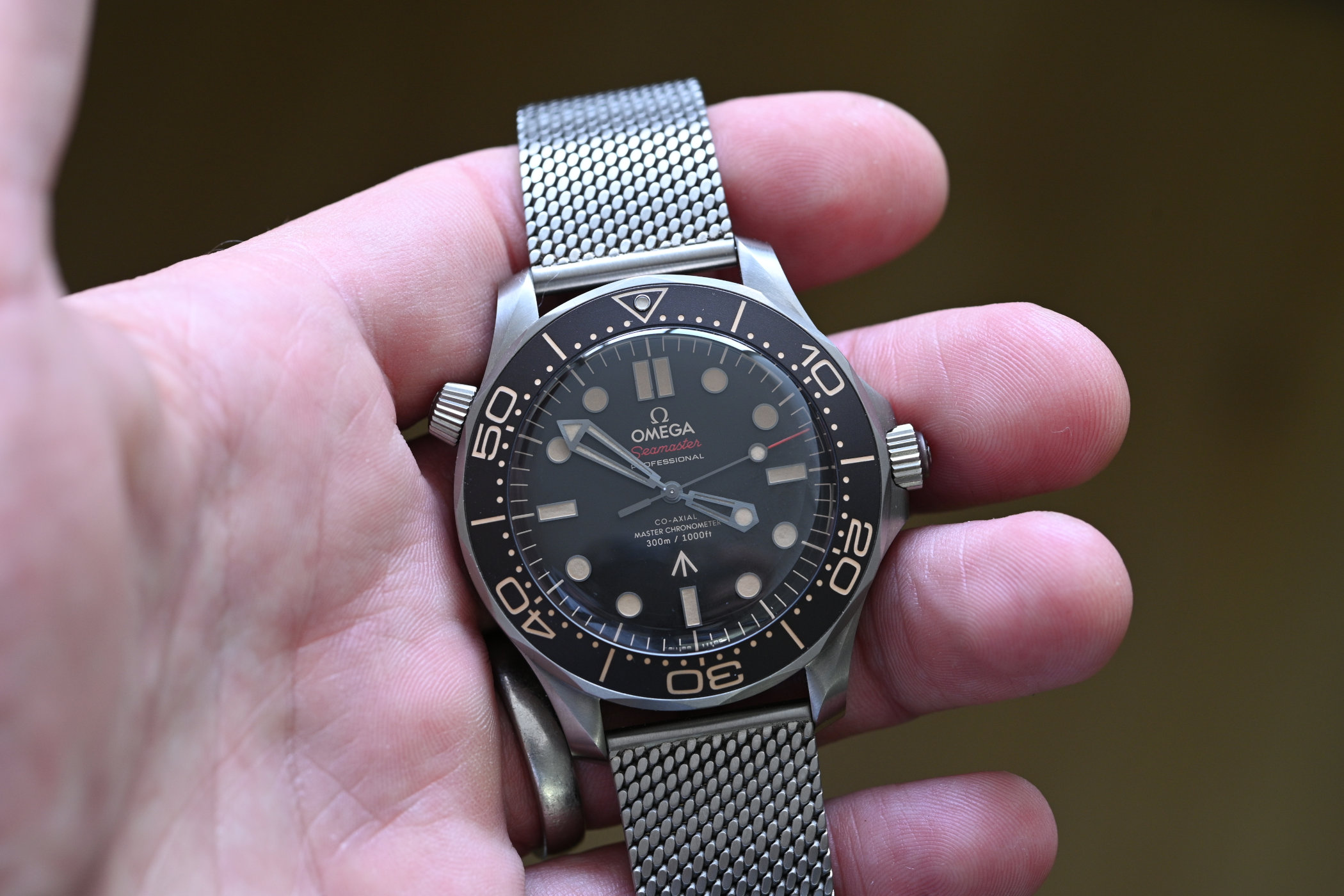 Regardless of that little factor, the 007 Edition is a very impressive watch. Everything feels very solid and robust, just as we expect from a brand like Omega. It looks rather stealthy and tool-ish, is a more than capable dive watch and for once is not a limited edition likely to be sold out within minutes. 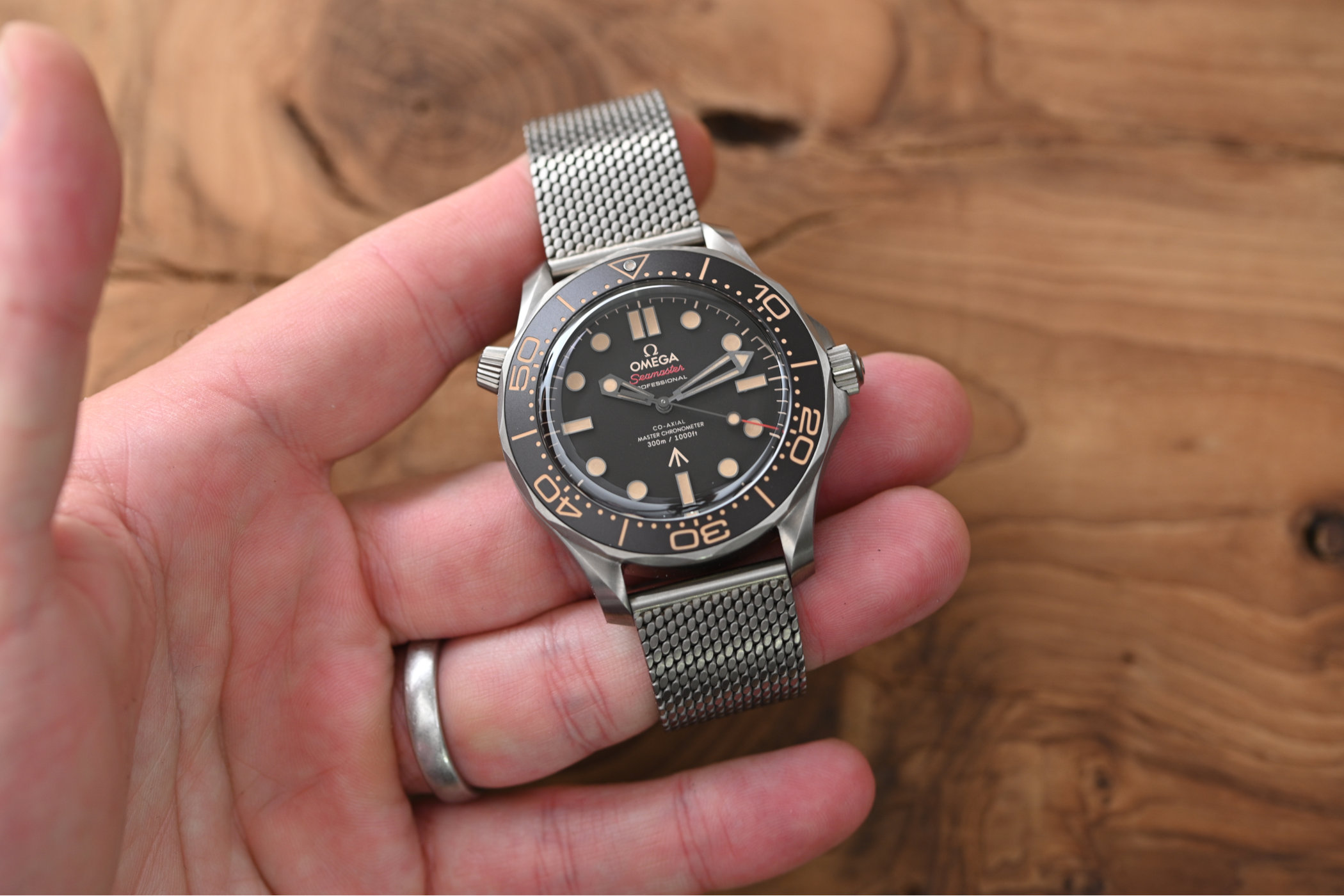