Not all chronograph watches are created equal, that’s an undeniable fact and we all know it. And when it comes to tracking elapsed time with great precision, driven by a purely mechanical movement, few brands do it like A. Lange & Söhne. Any chronograph movement is a big step up in complexity over a time-only piece, but an integrated triple split flyback chronograph is pushing boundaries very far indeed, close to the impossible. But impossible for the German Haute Horlogerie manufacture it is not, as in 2018 the A. Lange & Söhne Triple Split was presented. This unprecedented watch is the brand’s crowning achievement in the field of chronographs, now also presented in a pink gold case with a deep blue dial.

When A. Lange & Söhne presented the Double Split back in 2004, the watchmaking world took notice. The chronograph has always been an important complication, not only from a historical watchmaking perspective but also for A. Lange & Söhne as a brand. Naturally, the Lange 1 remains at the core of the brand, but the stopwatch functionality plays an essential part. Just look at the 1815 Rattrapante Honeygold, the Datograph Perpetual Tourbillon or the Tourbograph Perpetual Honeygold for reference. And of course, there was the Datograph in 1999, a watch and a movement that made an impression when presented.

There are certain levels of complexity to distinguish in chronograph movement construction, each one becoming increasingly more difficult to master. A modular base chronograph movement already requires extensive knowledge and skill. Combining chronograph indications and timing indications into a united automatic movement, the integrated chronograph, is the next step. In principle, it shows the same information, but it’s far more challenging. This is part of the reason the industry laurels movements like the Valjoux 7750 and El Primero.

Increasing complexity at every step

If we take it one step further from an integrated chronograph movement, we enter the realm of the flyback chronograph. The flyback mechanism eliminates the necessity to first stop, and then reset the chronograph in order to start a new measurement of elapsed time. As the reset-pusher (often at 4 o’clock) is activated, the chronograph immediately restarts, cutting back on lost time in the process. 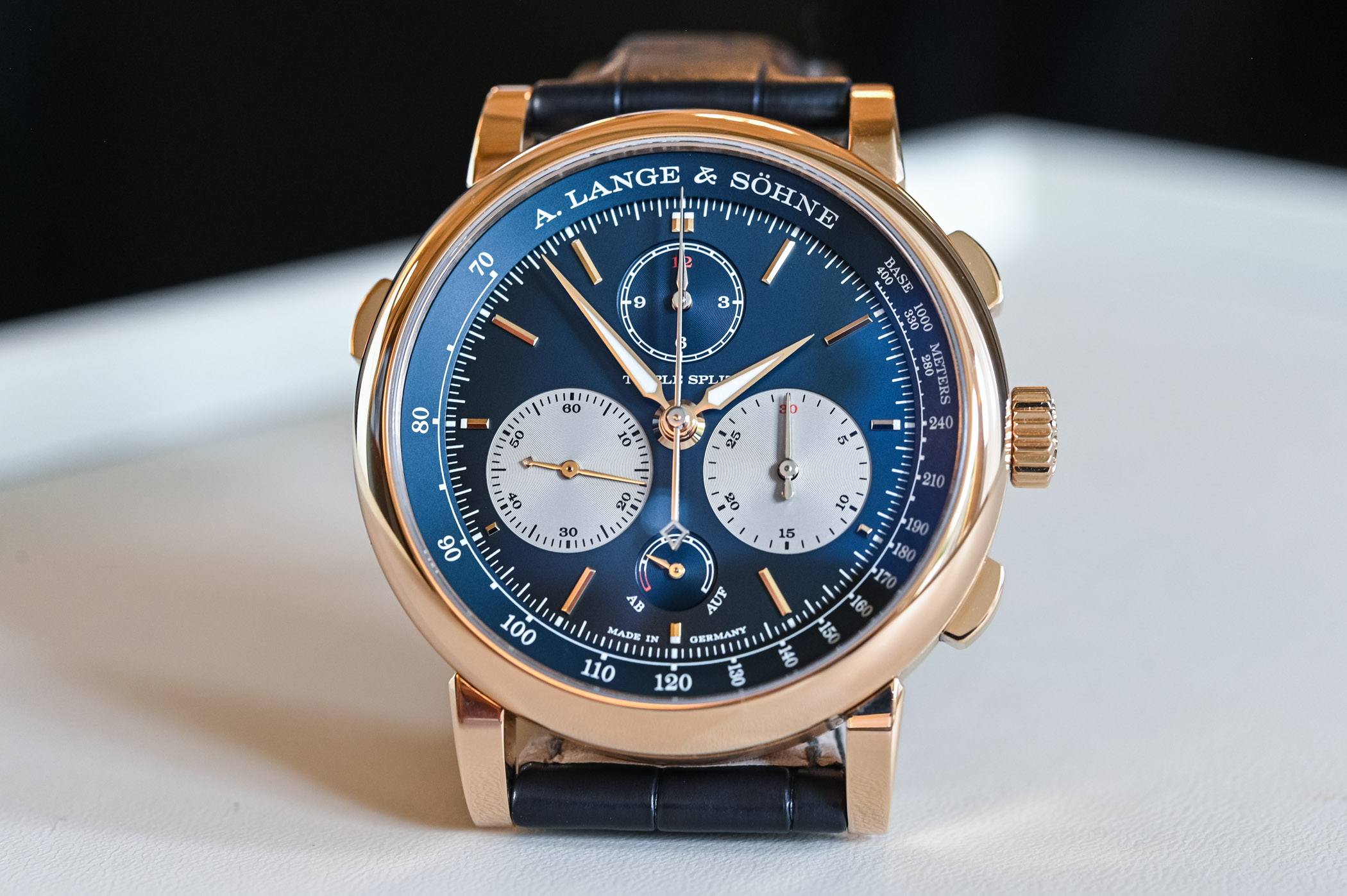 And then we get to the really complex section, splitting the indications in order to keep track of multiple events simultaneously. The craft of creating a split-seconds, or rattrapante chronograph comes from real-world limitations in the use of stopwatches. In racing, for instance, it became obvious that tracking time for the entire event worked rather well, but timing intermediate events (laps for instance) was impossible without adaptation.

A split-seconds chronograph divides the chronograph seconds into two separate hands. This resolved the issue for individual measurements, but only down to the chronograph seconds indication – thus up to 60 seconds. In 2004, A. Lange & Söhne was the first to present an integrated chronograph movement that could split the seconds and the minutes – thus up to 30 minutes. The so-called “Mighty Double-Split” has since been considered the pinnacle in chronograph watchmaking. The A. Lange & Söhne Double-Split was a real stunner, both visually and mechanically, and left the door open for the question if it would ever be surpassed. 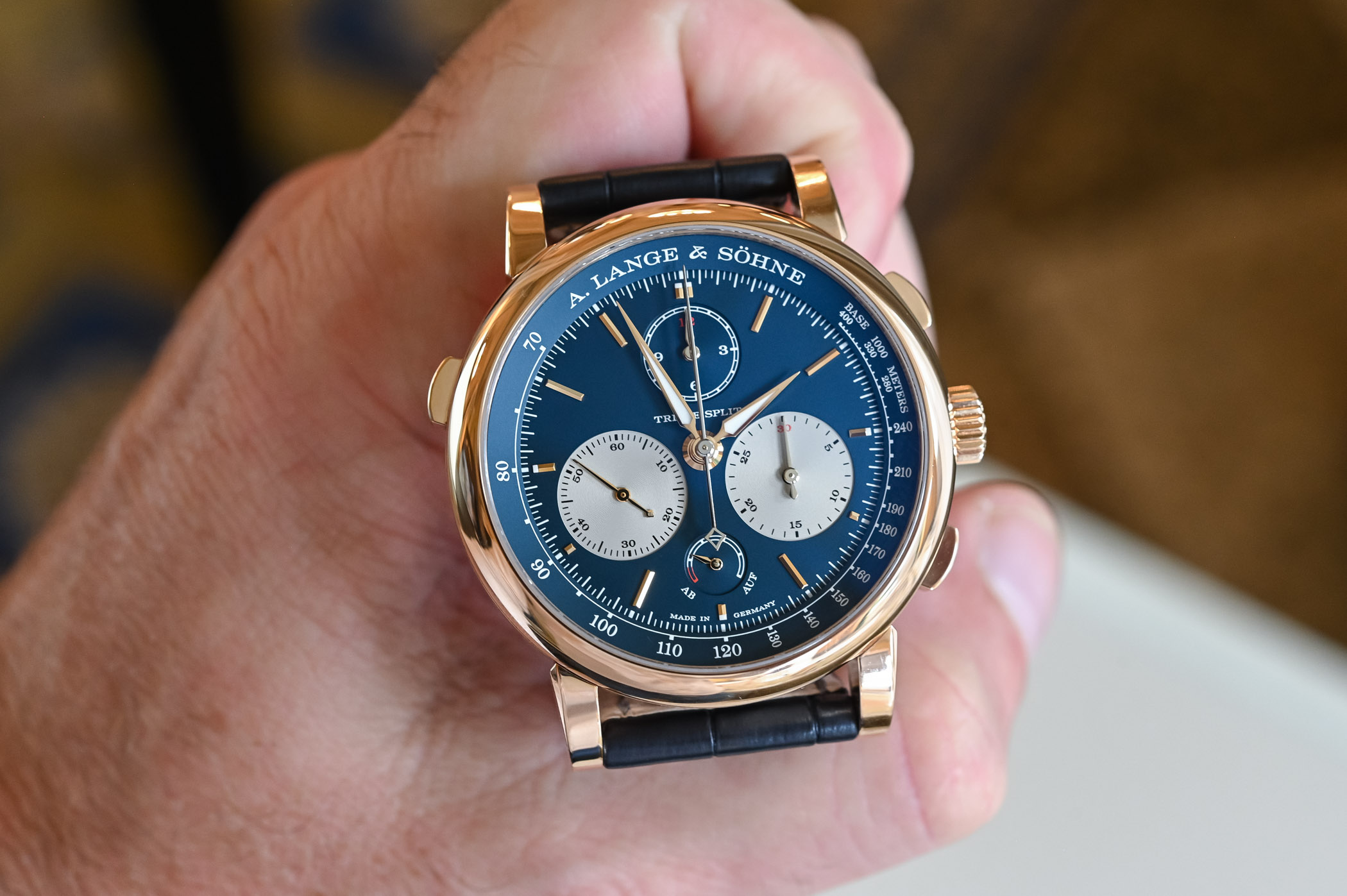 The simple answer is “yes” but there’s far more to it than that. In 2018, it was once again A. Lange & Söhne that presented the next step in chronograph watchmaking with the Triple Split. The name leaves little to the imagination what this watch can do. Next to splitting the seconds and minutes, this was the first-ever, and to this day the only watch that also splits the elapsed hours – so now up to 12 hours could be recorded as an intermediate time. The practicality and usability of the watch are debatable, as our Managing Editor Brice explained in his in-depth review.

The first Triple Split by A. Lange & Söhne had an 18k white gold case with a slate grey dial. The combination of material and colour was quite discreet, yet executed in typical A. Lange & Söhne perfection. With the introduction of the new pink gold and blue dial version, the Triple Split has been given a far more luxurious appeal. 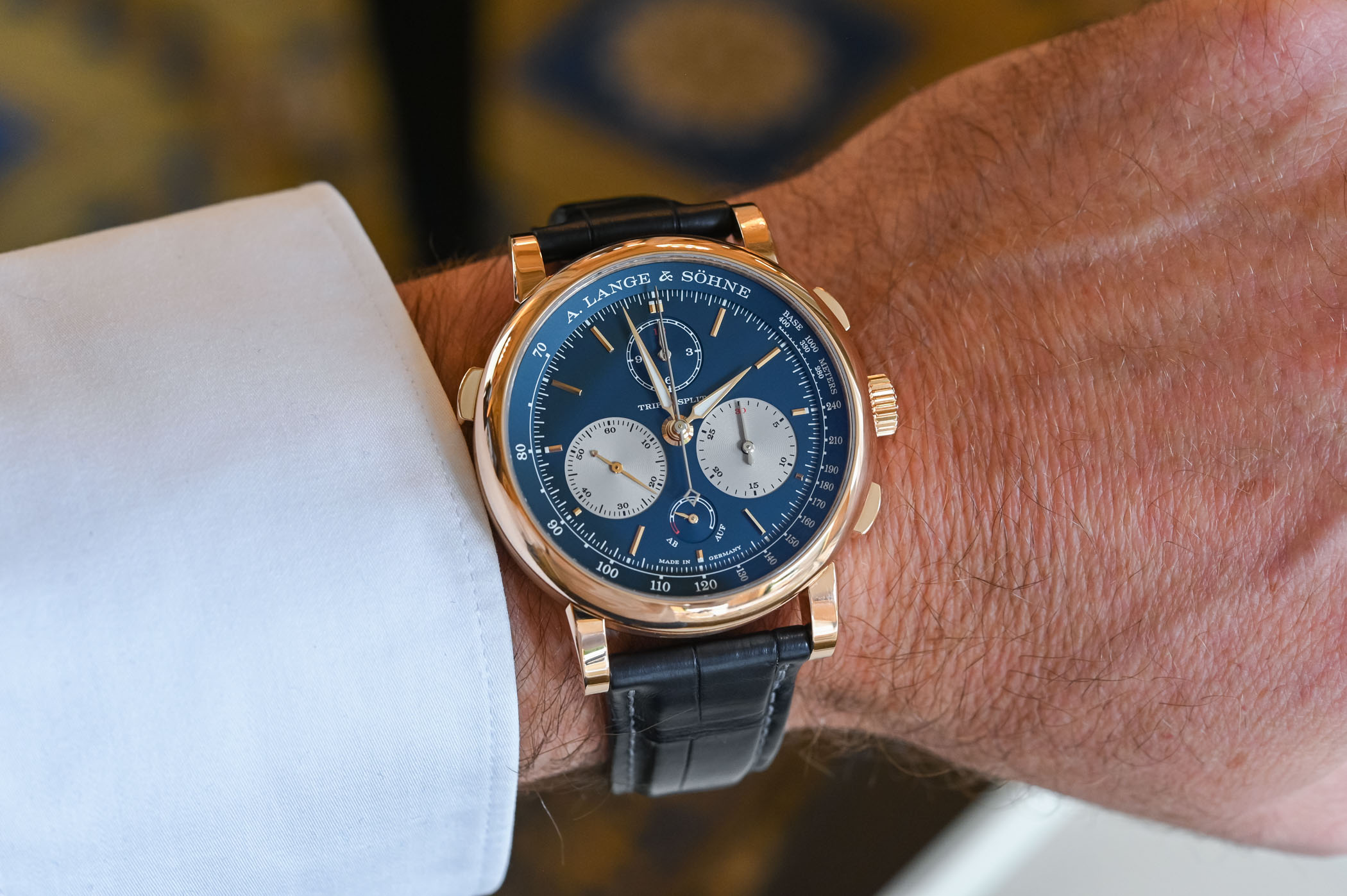 The 18k pink gold case measures a substantial 43.2mm in diameter and 15.6mm in height. The simple fact is the watch needs this size to house the technically complex movement and spread the indications in a manner that it remains as legible as can be. The case has a satin-brushed caseband, with a polished bezel and lugs. The alternating finish gives it an appealing touch of modernity. 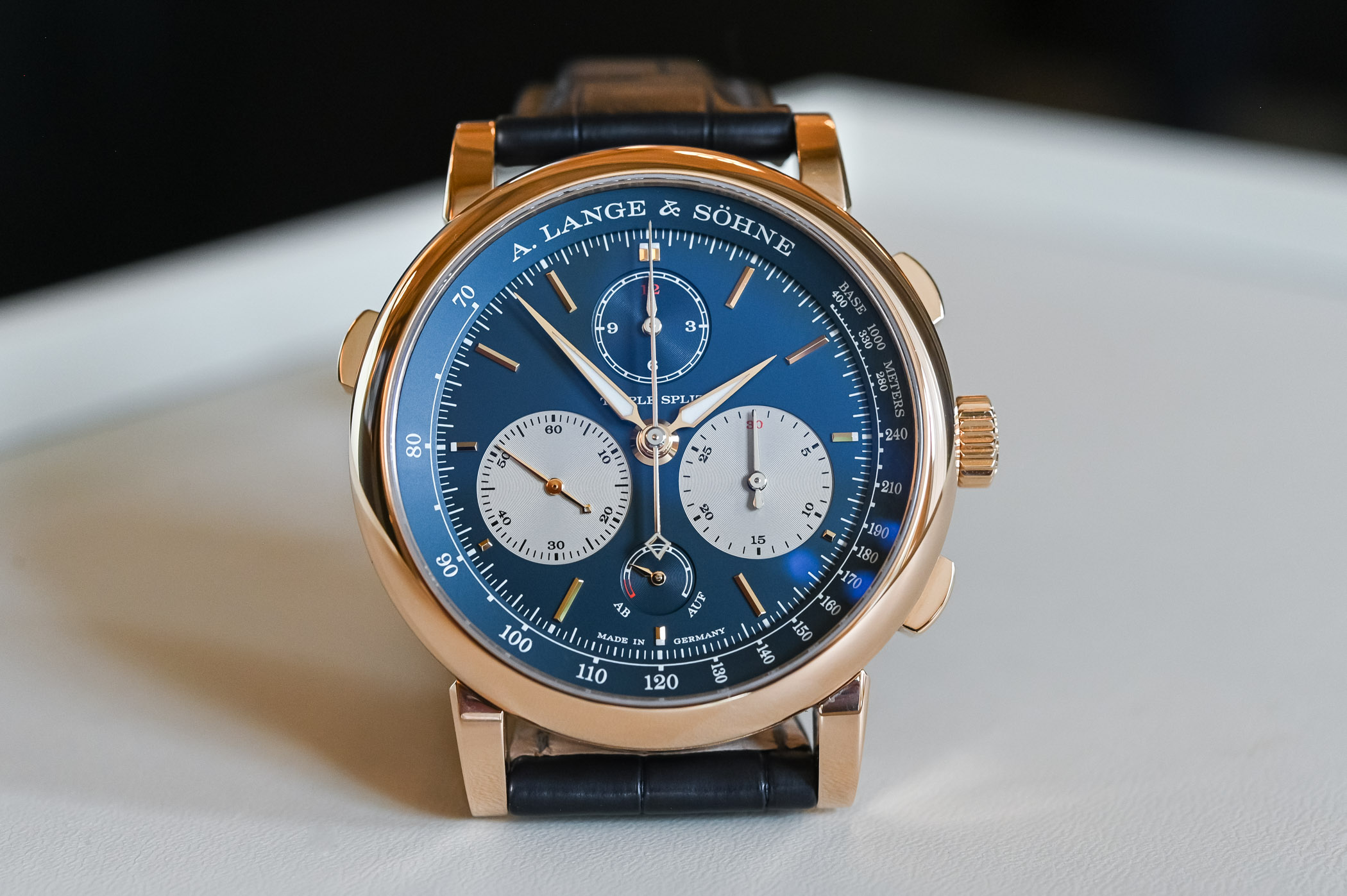 Spread around the caseband are the crown, traditionally placed at 3 o’clock, and three pushers. The pusher at 2 o’clock is used to start and stop the chronograph. The pusher at 4 o’clock resets and restarts it on the go, simply by pressing it once. The third and final pusher, positioned at 10 o’clock, is used to split the chronograph. The distinction between the pushers is important, as we’ll now explain.

The new Triple Split uses a solid silver dial, finished in a rich blue tone. This is combined with recessed rhodium-coloured subdials for the small seconds and 30-minute counter. On the outer sloped ring of the dial is a tachymeter scale in white, with the brand’s name at the top. The middle section of the dial has an outer minute track with applied, faceted and polished pink gold indices for every hour one step in. Some are cut, due to the additional indications displayed on the dial, and the 12 o’clock index is doubled. The 3/6/9/12 indices also feature a small portion of Super-LumiNova, as do the hour and minute hands, for a slightly sporty touch and night-time legibility. 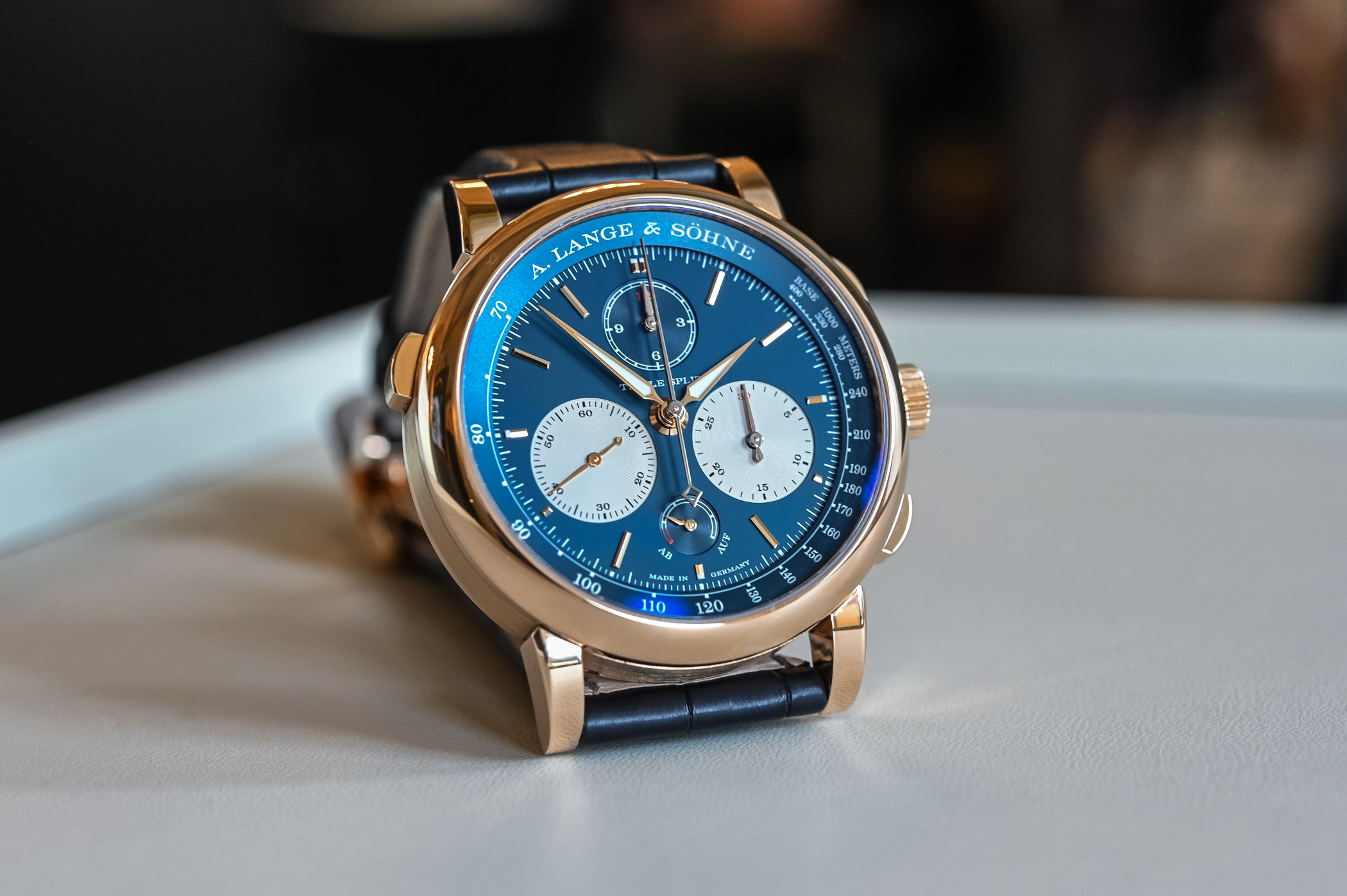 Getting to grips with the chronograph indications of the Triple Split isn’t all that difficult, despite the amount of information on display. Don’t be discouraged by the fact that no less than ten hands are spread around the dial, with four of them on the central axis alone. The largest pair of central hands display the running hours and minutes. Additionally, before we get to the chronograph display, there’s the AB/AUF power reserve indication at 6 o’clock. 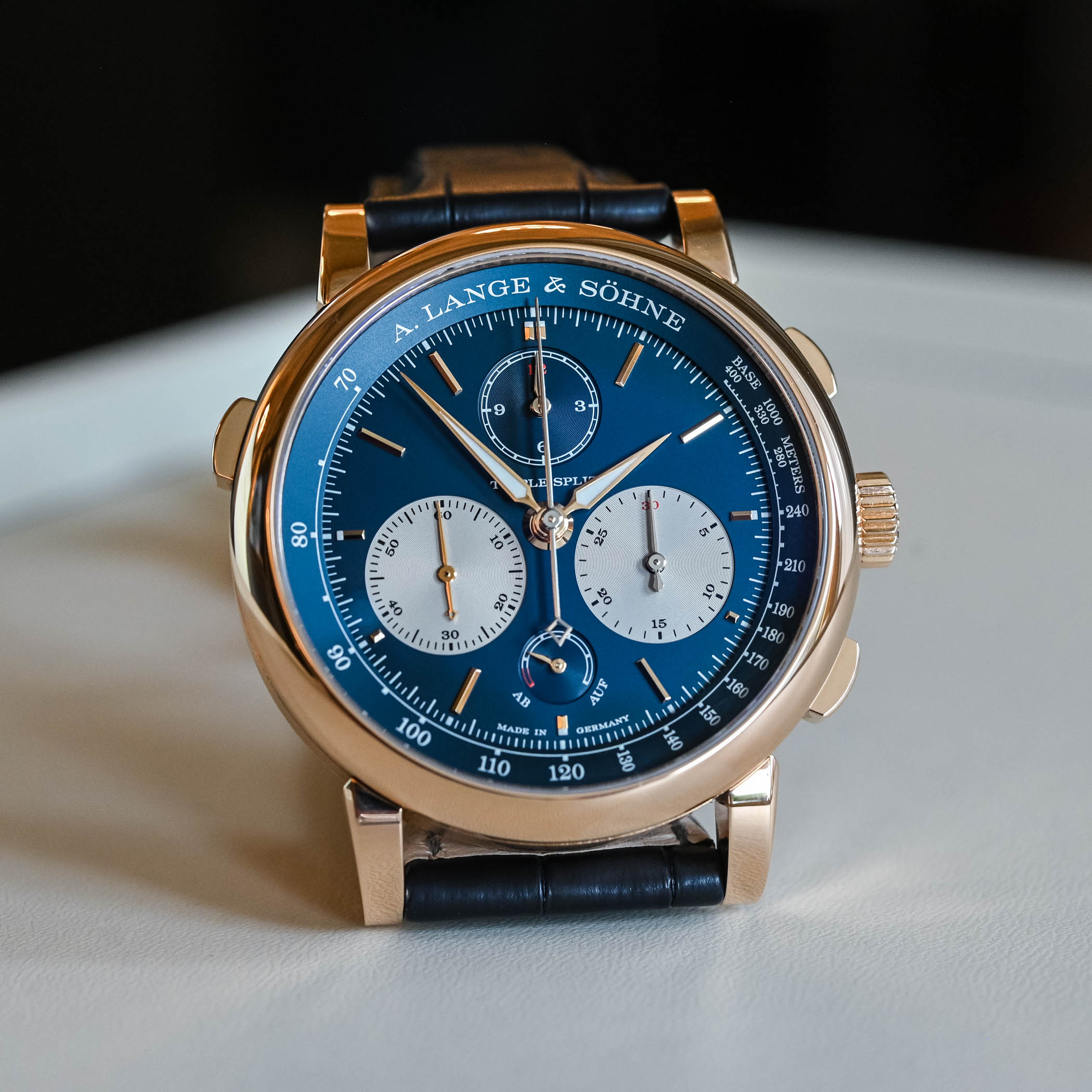 When the chronograph is at rest, the split pink gold and rhodium-plated hands for the seconds, minutes and hours are all lined up. It is only when activated things start to get interesting. In any rattrapante chronograph, both hands will start running in harmony when the chronograph is engaged (one on top of another), starting the measurement of elapsed time. The same goes for the minutes and hours in this Triple Split, albeit at a far slower pace, of course. 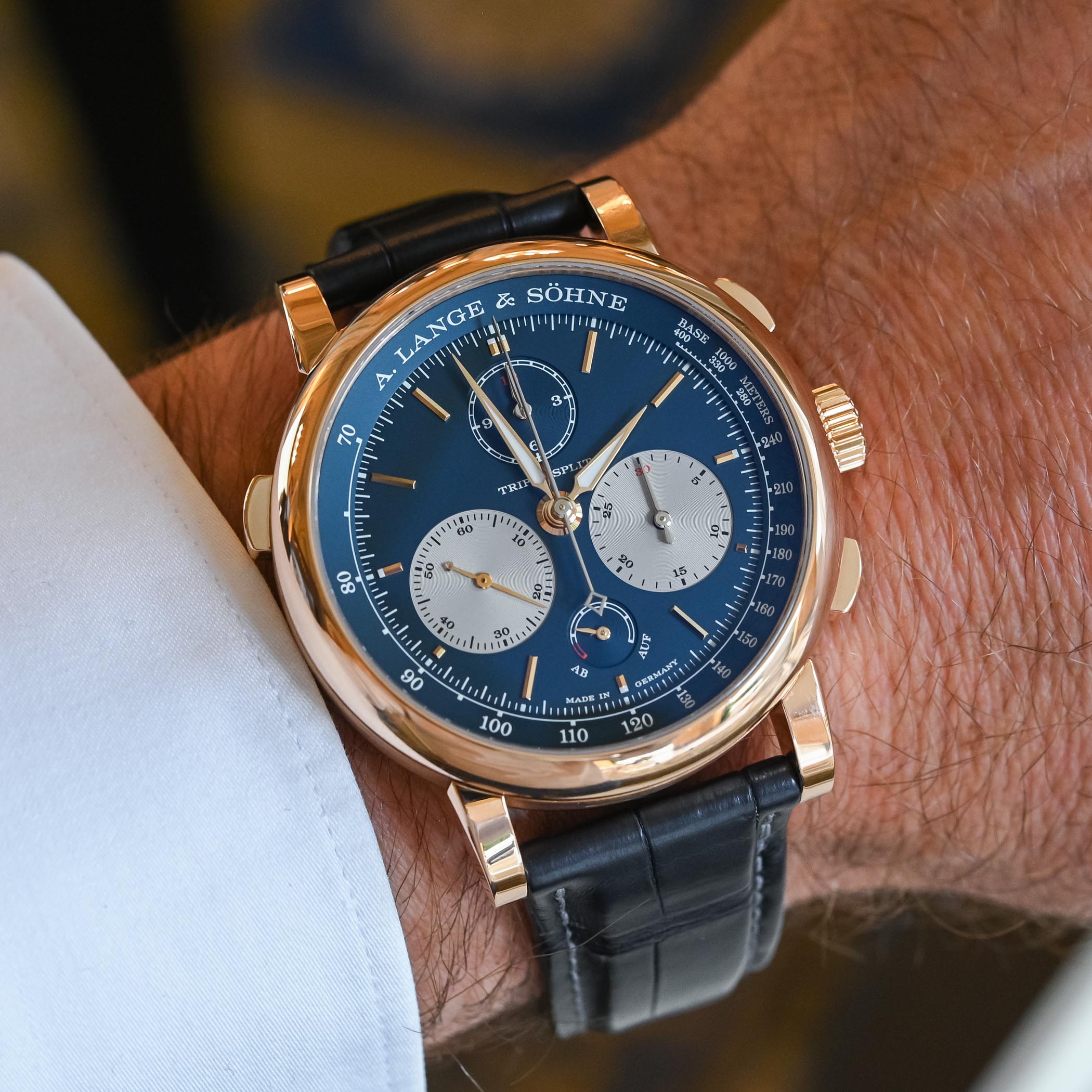 Pressing the pusher at 10 o’clock once will split each set of hands for the chronograph. The three rhodium-plated hands will stop running, while the pink gold hands will continue on their path. This allows you to read the elapsed time since the start, whilst the chronograph keeps track of the ongoing time simultaneously. Press the pusher at 10 o’clock again, and the rattrapante hands catch up again.

Considering the fact the A. Lange & Söhne Triple Split also comes with flyback functionality, pressing the pusher at 4 o’clock while running instantly resets all of the chronograph hands to zero, and will restart once the pusher is released again. The 30-minute counter has instantaneous jumping hands, something we already saw on the Double Split as well.

Enthusiasts and collectors alike have famously dubbed the Double Split movement a micro-city, and the same can be said about the Triple Split’s L132.1 in-house made calibre. It is without a doubt one of the most technically and visually impressive movements ever made, exquisitely finished and assembled not once but twice as with every AL&S movement. 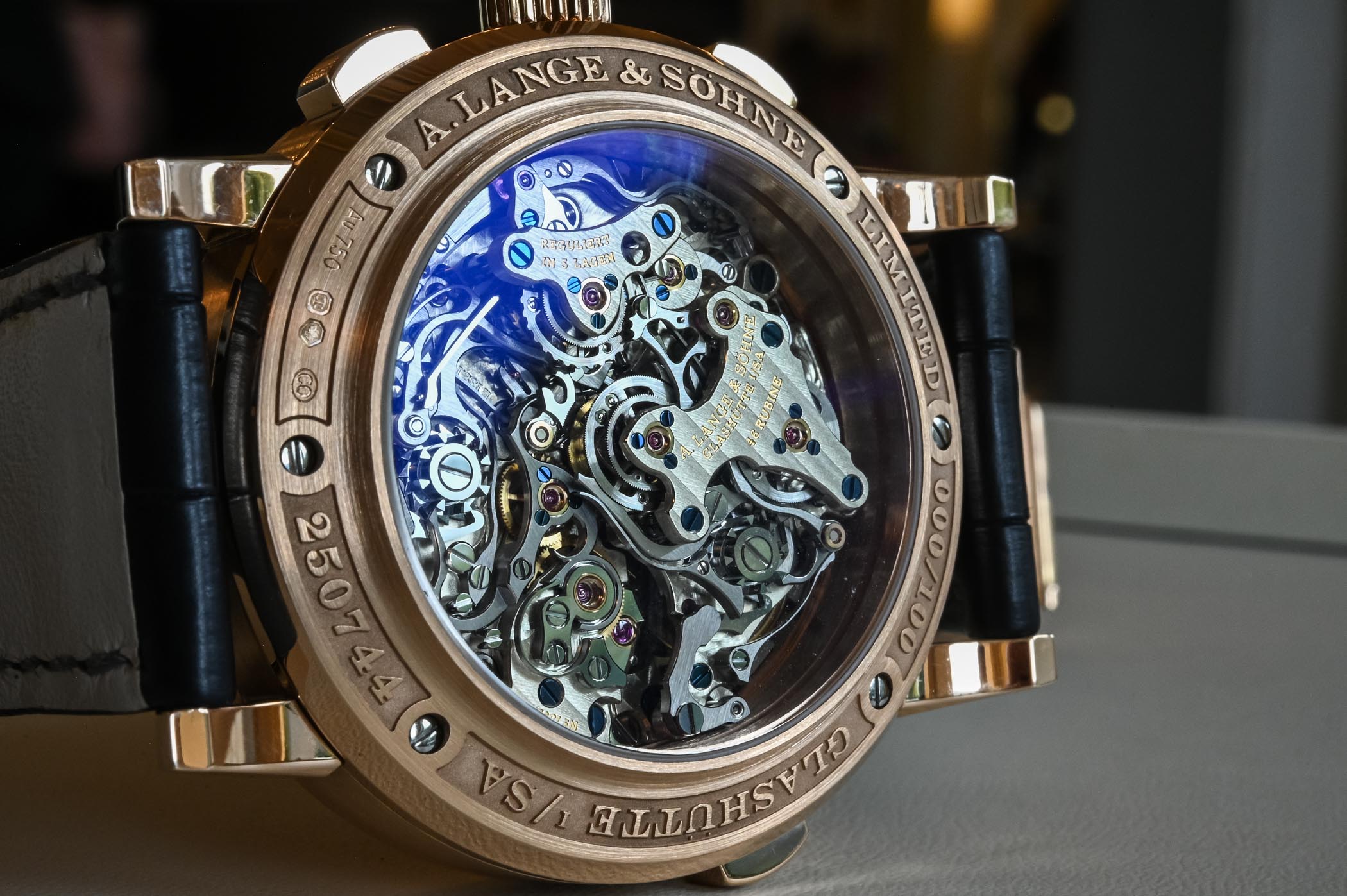 I once again refer to our Managing Editor Brice, who went through the triple “WOW-effect” of the movement’s visual impact when first handling the Triple Split in 2018. Turning the watch over reveals the incredible complexity of all 567 components used. There is so much to see, you kind of get lost in all the nitty-gritty details of it as it jumbles your senses. The level of depth of the movement’s architecture far exceeds most other movements we’ve come across.

At this level of watchmaking, it is impossible not to be impressed by the sheer amounts of components on display. With countless levers, gears, wheels and screws you can discover new details at every angle again and again. The two column-wheels for instance, one for the chronograph and one for the rattrapante function. The beating heart of the movement, the escapement and the engraved balance cock, are almost completely hidden from view, but you’d be forgiven if you hadn’t noticed it. 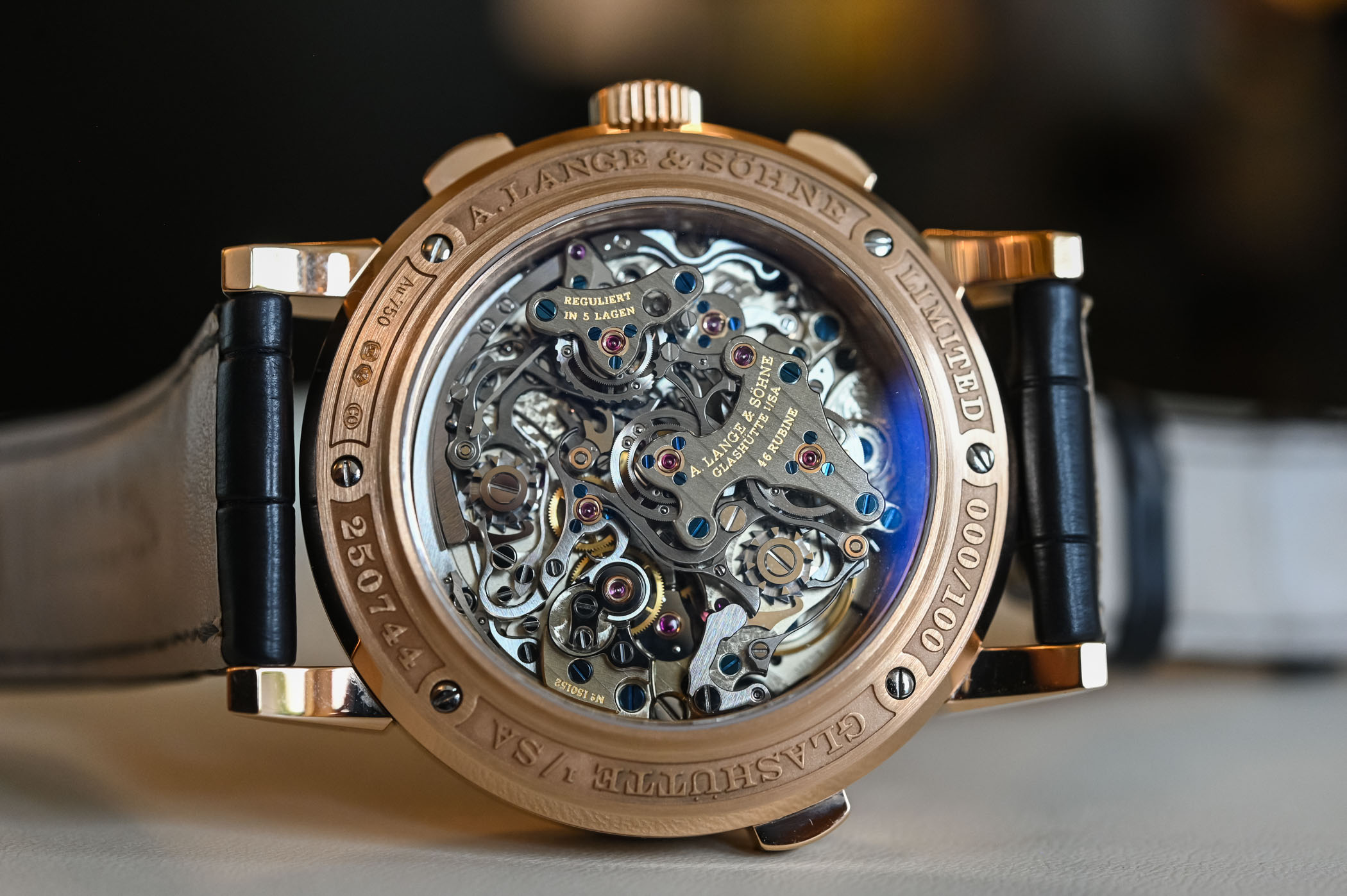 As ever, A. Lange & Söhne puts great attention to detail to the finishing of all components, even the ones that aren’t visible. We’re talking bevelled bridges, polished blue screws, polished gold chatons, levers with anglage, various types of brushing, and of course Glashütte ribbing on the bridges and plates. And as always with ALS, the movement is assembled twice… It’s a lot to take in, and I can fully imagine people spending hours just gaging down into that movement.

The A. Lange & Söhne Triple Split Ref 424.037F in pink gold with this exquisite blue dial is worn on a dark blue alligator leather strap. The stitching is done in silvery-grey, for a bit of contrast and to tie in with the subdials. It is secured to the wrist with an 18k pink gold pin buckle. A. Lange & Söhne only makes 100 pieces of this case and dial combination, retailing for CHF 159,400.

This seems like an awful lot of money, which it really is, but considering the complexity and level of finishing and detail, it seems fairly justifiable. Sure, there are cheaper chronograph watches available, but none at the level of the Triple Split. It is a true statement piece, both by A. Lange & Söhne for its watchmaking prowess and as a pure wristwatch.