They say life is full of challenges, but those challenges don’t often result in a groundbreaking new watch.

At this month’s WatchTime New York, De Bethune unveiled its Dream Watch 5 Tourbillion ‘Season 1.’ The ultra-limited-edition timepiece is the product of a request from record producer and collector Kaseem Dean, better known as Swizz Beatz. In 2020, he contacted the watchmaker directly with a dare to create a totally new take on its Dream 5 Watch.

The resulting timepiece features a striking, ogive-shaped case made of hand-polished and blued grade 5 titanium. (De Bethune patented the process for blueing the metal in 2006.) Instead of a single domed sapphire crystal, the watch features five blue-tinted crystals inserted into curving apertures on the dial side of the case. In the center, there’s a palladium and flame-blued steel spherical moon-phase indication so accurate, it only needs to be adjusted every 1,112 years. The window at 3 o’clock shows the current time with a digital jumping hours display and minute track. And because this is De Bethune, the crown features a cabochon sapphire crafted from actual sapphire, not the synthetic version used in many other fine watchmaking applications.

The caseback gives collectors a view of the model’s ultra-thin De Bethune tourbillion, a complication made of lightweight titanium that completes one rotation every 30 seconds—twice as fast as a conventional tourbillon. The watch’s hand-wound DB1249 movement offers an extensive four-day power reserve and features an in-house self-regulating twin barrel, a titanium balance-wheel encircled by a patented white gold ring and a balance-spring featuring an in-house developed and patented terminal curve, as well as a silicon escape wheel that oscillates at a rate of 36,000 vibrations per hour. 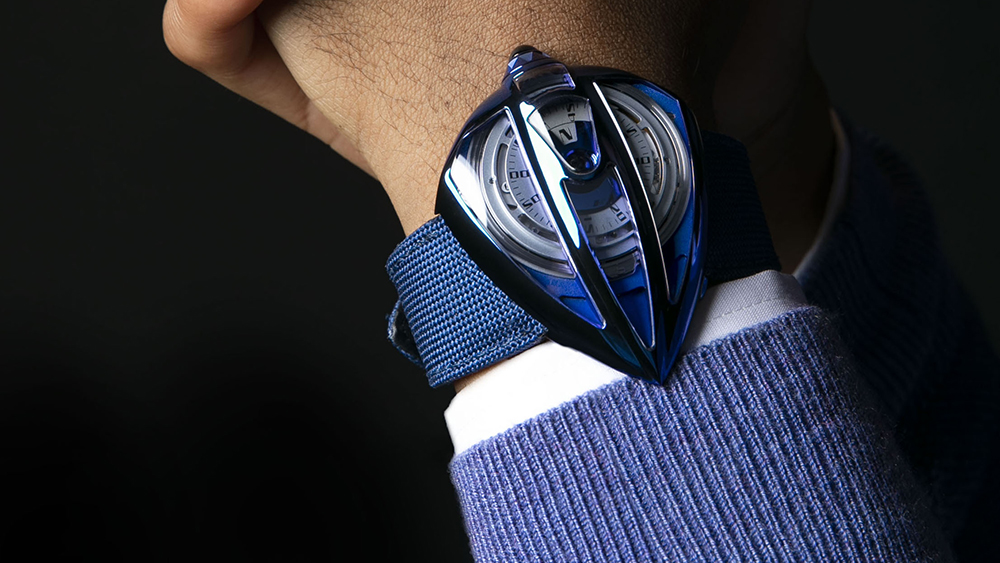 “It’s an honor to partner with De Bethune, a company with true craft and creativity,” Swizz Beatz told Robb Report in an email. “I always want to disrupt the norm with something new and unexpected, and I appreciate De Bethune for feeling the same way. Season 2 coming soon!”

De Bethune released its first Dream Watch in 2008, creating the blueprint for its most experimental offerings. The new DW5 Tourbillion ‘Season 1’ derives its unique shape from its predecessors, and follows a theme light and transparency, which makes sense: the other Dream Watches typically invoke themes of space, time and light.

If you’re in the market for a wrist sculpture of your own, De Bethune and Swizz Beatz’s Dream Watch 5 Tourbillion ‘Season 1’ will soon be available for $520,000. It’s limited to just 10 examples, which probably won’t be on the market for long. Visit the De Bethune website for more details.