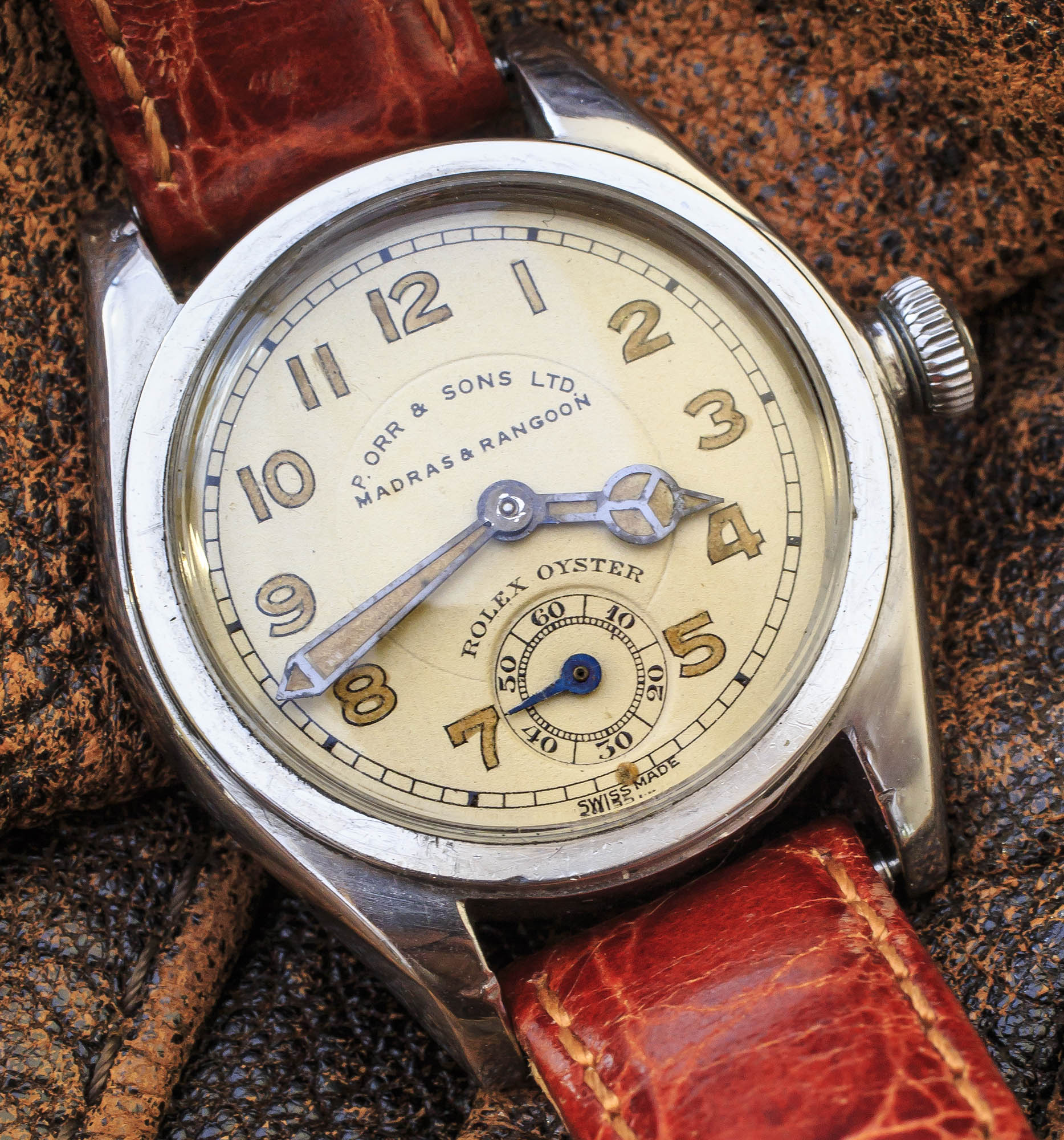 Editor’s Note: This is the first in a new series of editorial columns by our senior editorial staff. Starting this week, every Monday morning, aBlogtoWatch aims to bring you a more personal, eclectic kind of editorial expression than our usual blend of news and hands-on reviews. This new initiative should give our community the chance to get to know our aBlogtoWatch team members better as people and to foster a new kind of discussion removed from the usual constraints of the news cycle. We hope you enjoy reading and interacting with these columns as much as we enjoy creating them.

As a mostly solitary, inward-facing pursuit, watch enthusiasm tends to foster cynicism. Over time, watch collectors often ossify in their beliefs and tastes, defining a comfortable niche for themselves and reflexively dismissing anything that falls outside their own preconceived notions. It’s an easy line of thinking to fall into, as the weight of inertia and the natural human drive for validation work to convince us that the way we’ve been collecting must be the “right way” and that, subsequently, any other way of looking at watch enthusiasm must be “wrong.” Until recently, I found myself slipping into this same line of thinking. After over a decade of collecting led me through early eclectic phases ranging from vintage Soviet watchmakers to classic Seiko, ‘70s Omega, and beyond, I’d settled into a comfortable rhythm of collecting sports chronographs, vintage-inspired divers, and the occasional dress watch. I was taking far fewer risks with my collecting, and the mantra that had guided my approach to watches since the very beginning (carried over from a previous career in automotive media) – “Dare to be Different” – was increasingly fading from view. One watch changed all that and reminded me that, in some ways, the most powerful part of a timepiece is its ability to connect people from different times and places around a common, enduring machine. Enter this circa 1941 Rolex Oyster Flat Back. 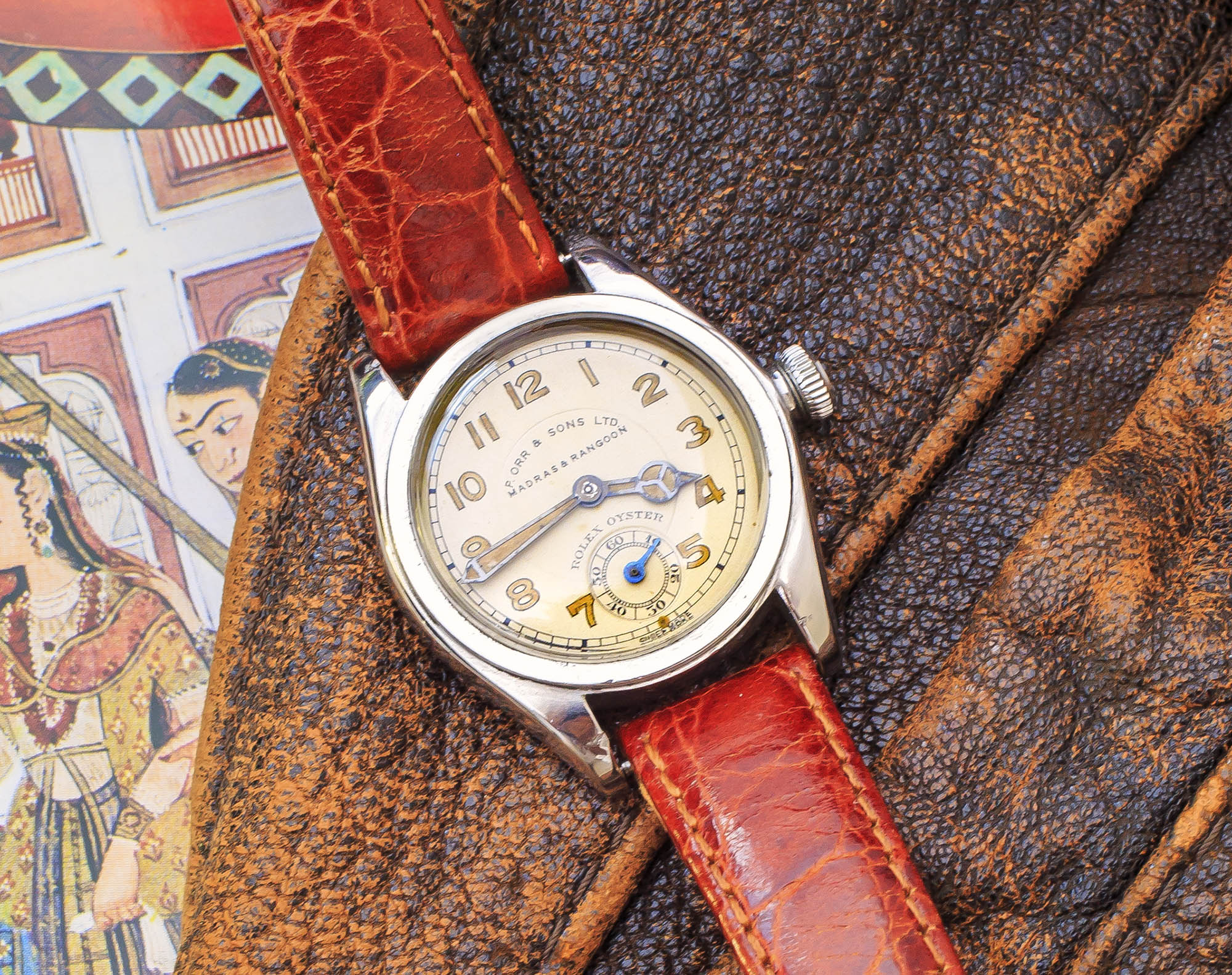 I stumbled onto this piece while exploring the aisles of the 2022 Las Vegas Antique Jewelry and Watch Show with aBlogtoWatch Founder Ariel Adams, taking in the sights after a week at Couture 2022. Even tucked into a corner of a display shelf, it immediately caught my eye, and despite every collecting habit and stylistic impulse I’d built up over years in the watch business, I bought it on the spot. 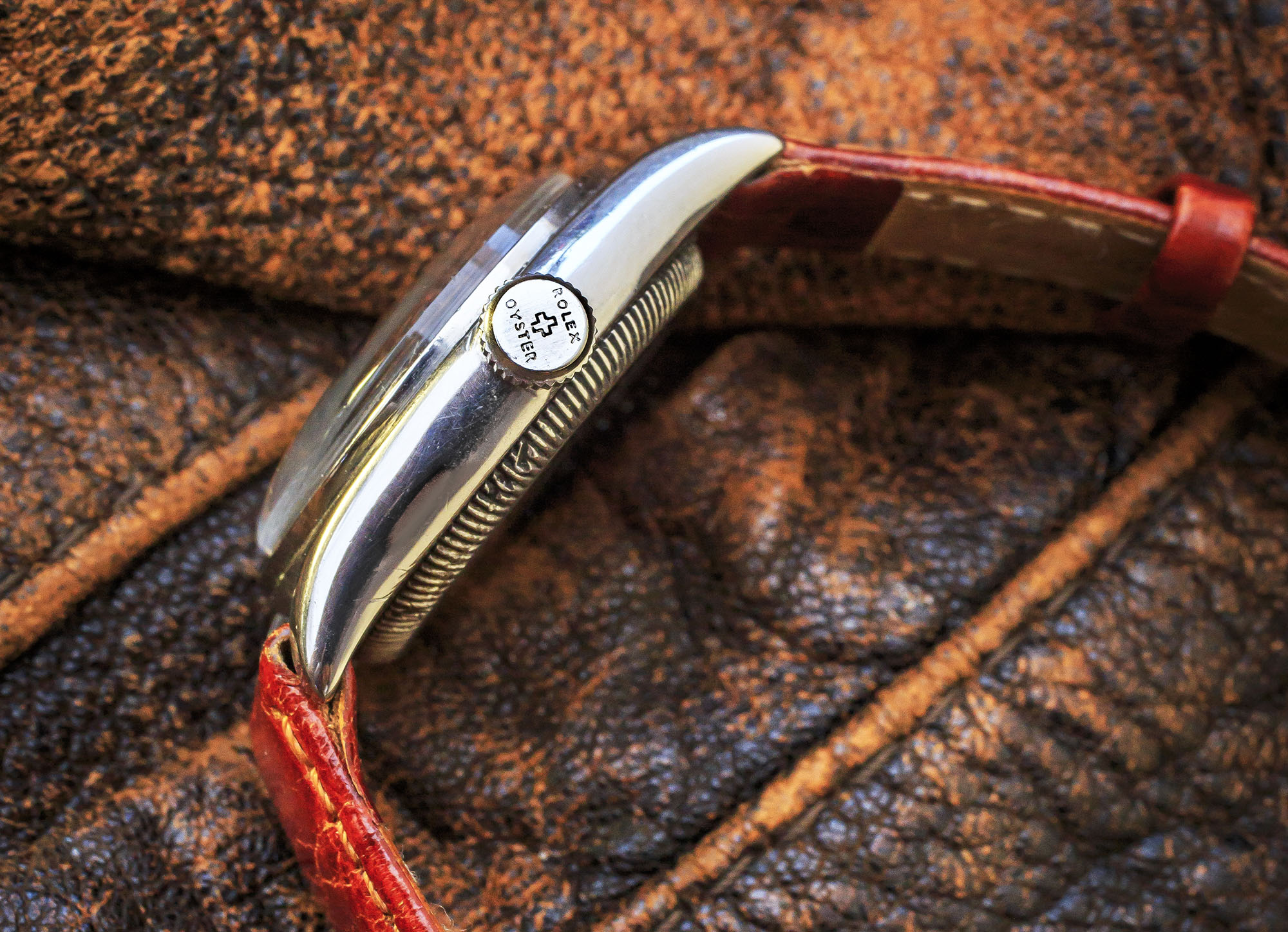 Taken on its own, the Oyster Flat Back is classic early Rolex fare. Although it takes a fair bit of acclimatization for modern tastes at only 30mm-wide, the stainless steel case still carries many of the hallmarks that would go on to define the look of Rolex case design to this day. Although the larger 34mm-wide Bubbleback line carries much of the weight of this era in Rolex enthusiast circles, this smaller Flat Back design is a clearer expression of where the brand was headed, with clean no-nonsense tapering lugs, a raised flat polished bezel, and a gently rounded case side profile that continued to be an Oyster series staple for decades. 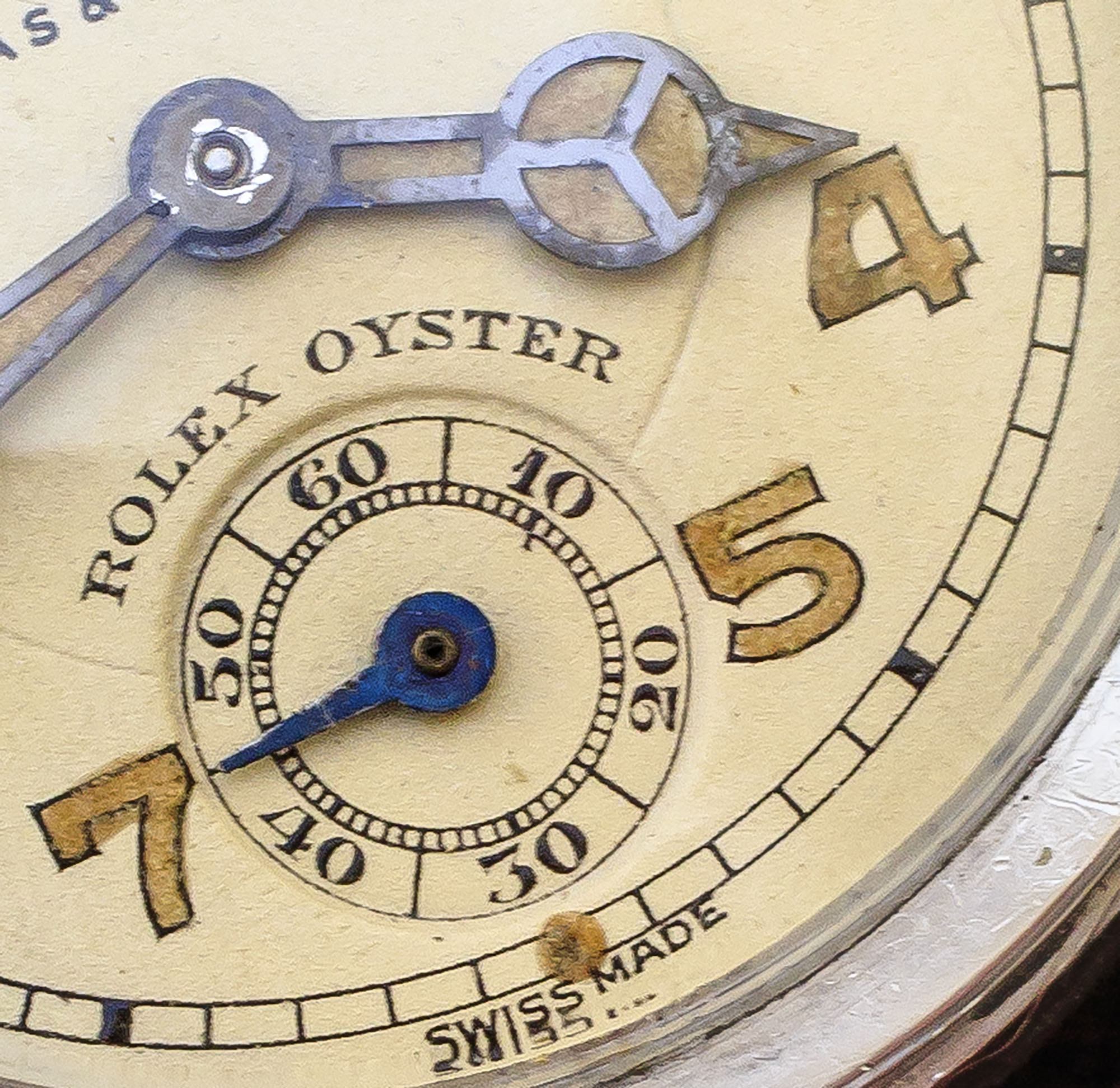 Of course, it’s the dial that truly captures the imagination here. For an 81-year-old watch, the patina is stunningly even, aging the main dial surface to a warm cream tone while the radium lume takes on the striking caramel khaki hue that so many manufacturers look to emulate these days in tinted Super-LumiNova. The 6 o’clock running seconds subdial is a brilliantly evocative little showcase of early 20th-century graphic design, with swooping serif numerals and a chemin de fer scale surrounding a dramatic blued needle hand. With the main handset, the watch shows the trademark Rolex “Mercedes” handset in one of its earliest forms, featuring a broad tapering shape that makes this design impressively legible for such a small timepiece. What made this more than another watch in a display full of vintage Rolex models, however, is the text at 12 o’clock. Jeweler-signed dials are a well-known attraction in vintage enthusiast circles, and collectors seek out well-known jewelry dealers such as Tiffany & Co. or Türler as a way to set vintage timepieces apart from the crowd. P. Orr & Sons, on the other hand, was not a jeweler I had ever heard of, and the two listed cities on the dial immediately sent my mind racing with possibility. For those unaware, neither Madras nor Rangoon exist on any map in the modern world. Now respectively known as Chennai, India and Yangon, Myanmar, at the time, these two cities were some of the brightest jewels in the crown of British-controlled south Asia. With two simple lines of text, this timepiece had opened up a door to another world, one that had long since vanished in the wake of a world war, decolonization, and nearly a century of growth. 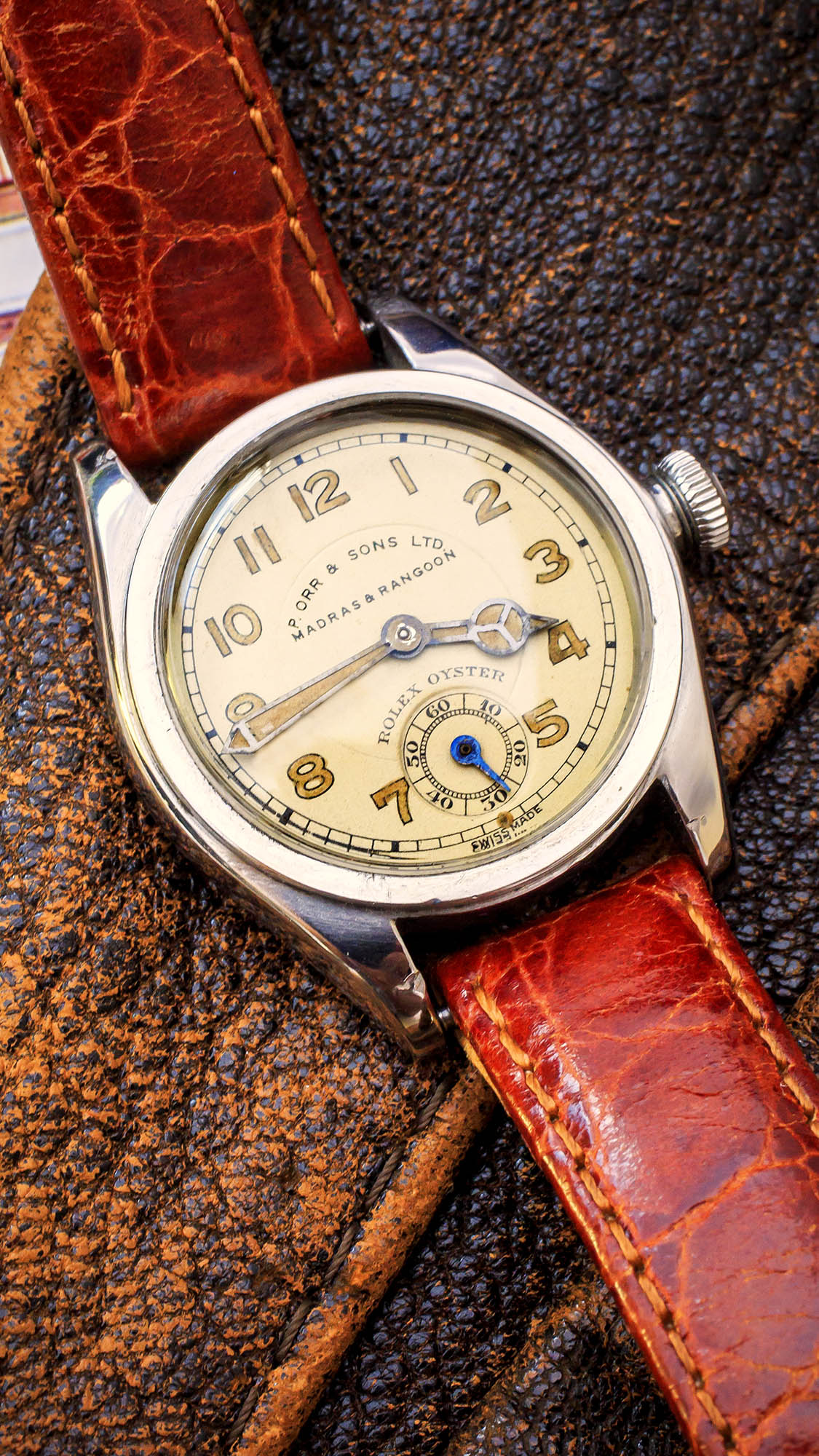 My first thoughts weren’t centered on any romanticized notion of the often brutal British Raj, but rather on something altogether pulpier and less intellectual. If Indiana Jones had worn a watch, I theorized, this would be it. For a while, I was content with the notion of this watch on Harrison Ford’s wrist as he hacked his way through jungle undergrowth and landed uppercuts on sneering Nazi officers. Of course, the truth is greater than any fiction, and the focus quickly shifted to finding the real story behind this diminutive Rolex. 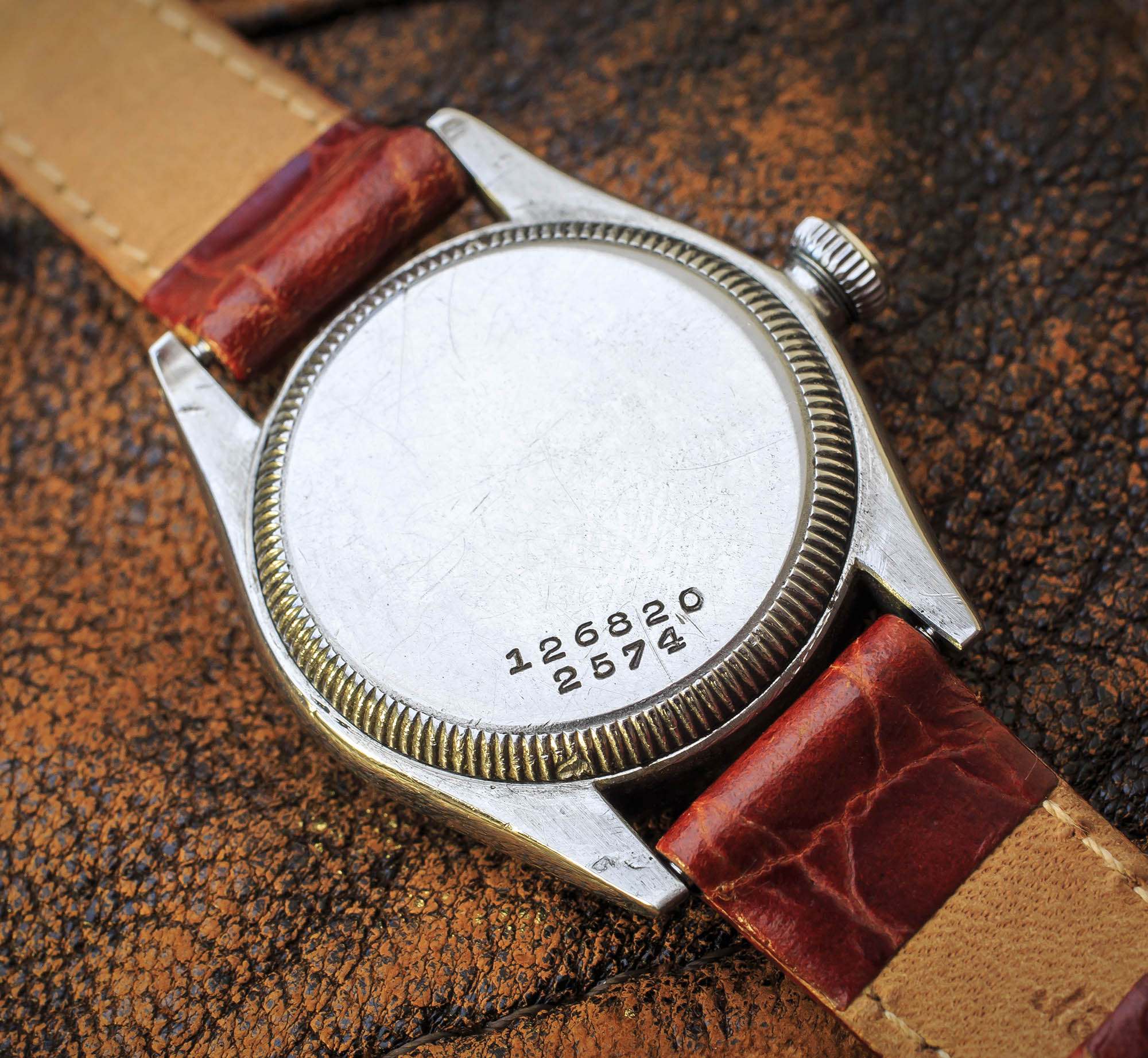 Despite repeated attempts to contact P. Orr & Sons and its representatives, the brand declined to comment for this article, so much of this story is fragmentary but points to a potentially fascinating legacy. P. Orr & Sons itself still exists and was first founded by Scotsman Peter Orr in 1846. The first P. Orr & Sons retail showroom opened in 1879, on the fashionable Anna Salai road in the heart of Chennai, India (formerly Madras). This original location is now a historic landmark in the city of Chennai and carries a long and fascinating legacy entwined with the British royal family — in fact, the 1879 inauguration of the first P. Orr & Sons store was carried out by the future King George V and Queen Mary. It also prides itself on being the first Rolex authorized dealer anywhere in India. As for the exact history of this watch, the production serial number dates the Oyster Flat Back to mid-1941. Given the time it would take to ship the watch from Switzerland to the jeweler in India or Myanmar (formerly Burma), it’s likely that this particular piece arrived on the shelf right as World War II blazed its way into the region. While it’s far from a standard-issue military timepiece, it’s entirely possible that this could have been purchased by some soldier or officer on their way to defend the region against impending Japanese invasion, or even survived the long, bloody Burma Campaign that stretched from December 1941 all the way to the end of the war in late 1945. Even conjecture doesn’t extend beyond the end of the war, and the odyssey that took this watch from south Asia to a vintage dealer’s shelf in New York, and eventually to a Las Vegas trade show is likely lost to the sands of time. 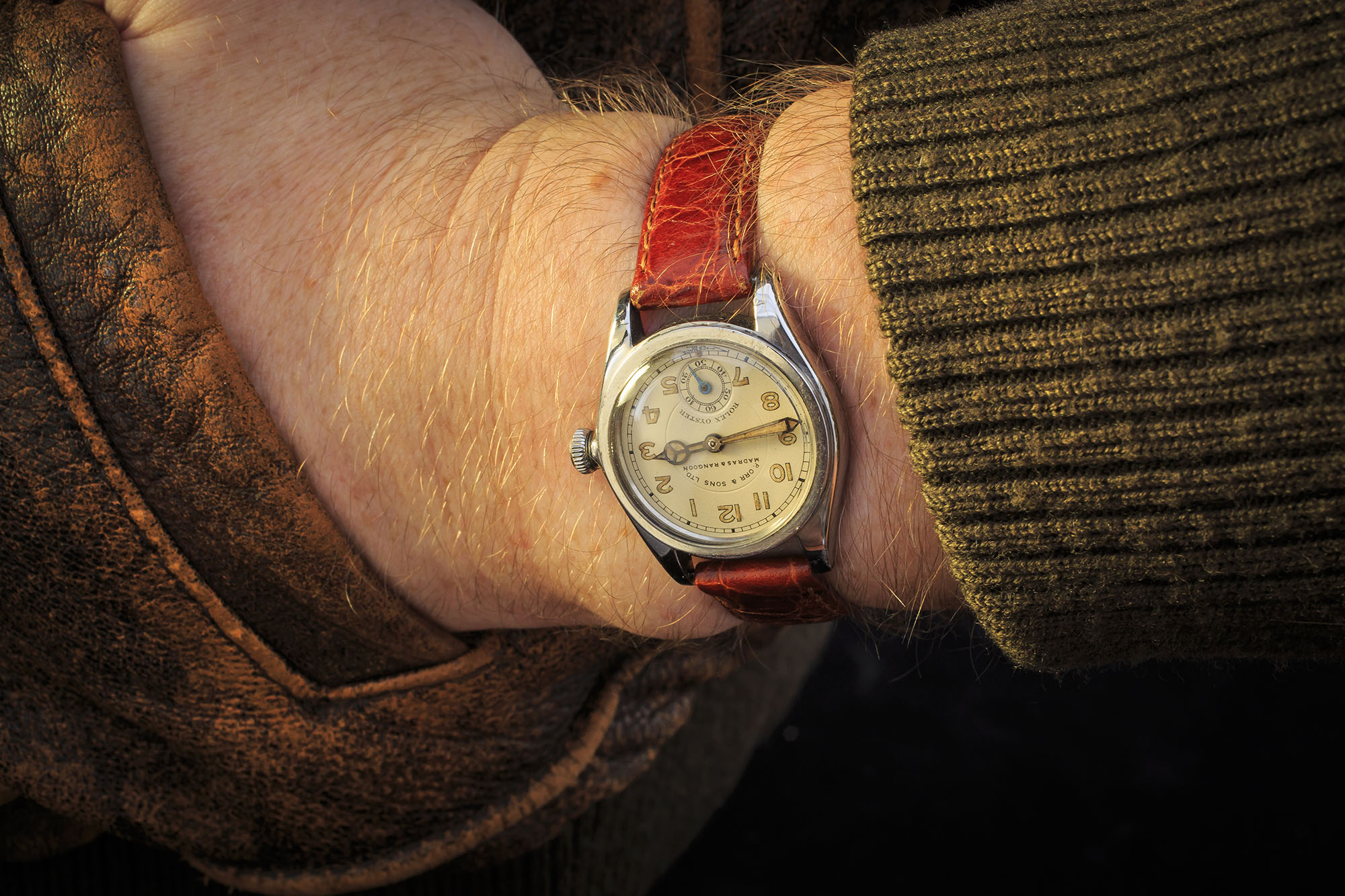 It’s this sort of mystery, however, that gives this Rolex its power. It’s more than just a watch — it’s a connection through time to a world that no longer exists, and a potential conduit for nearly endless stories. Is it perfect? Far from it. It’s still remarkably small, the case has its fair share of scratches and dings, and the movement within is in definite need of servicing. But all these blemishes aside, this watch is a potent reminder of the real joy of watch collecting – not slowly building a rigid personal orthodoxy or glibly dismissing anything outside of our own comfort zones, but connecting to a greater world and a rich legacy through the window of a beautifully crafted, deeply expressive machine. For that reason alone, it’s hard not to love this war-era Rolex Oyster Flat Back, even as I look to make a custom bund strap to give it more of a presence on the wrist.