Luxury watches are now inviting comparisons to fine art, largely because of the stratospheric prices paid for certain pre-owned and limited models. But few draw a more convincing aesthetic parallel between watches and art than pieces from Vacheron Constantin. The brand’s New York City flagship on 57th Street earmarks dedicated spaces for regular art exhibits, often making connections between the installations and the world of timepieces. The latest exhibition, themed “The Anatomy of Beauty,” is a celebration of inner and outer beauty in nature-inspired art and in mechanical watches.

The wall of the flagship’s two-story atrium is covered by a three-dimensional, mixed-medium installation by LA artist Courtney Mattison depicting coral and other invertebrates that live under the sea. The coral is juxtaposed with larger-than-life photographs and videos in portholes showing of the inner workings of watch movements, as if shown under magnifying glasses. Meanwhile, the store’s back gallery space is occupied by a work entitled “These Waters,” an immersive sculptural installation created by New York artist Melissa McGill for Vacheron Constantin. It is composed of five large-scale photographs of New York’s Hudson River imposed on glass panels. The panels lean against each other and the wall, appearing to be portals into the waters, their size and placement evoking the rise and fall of the tides. “It aims to inspire conversation about the preciousness of water, our life force,” says a Vacheron statement. 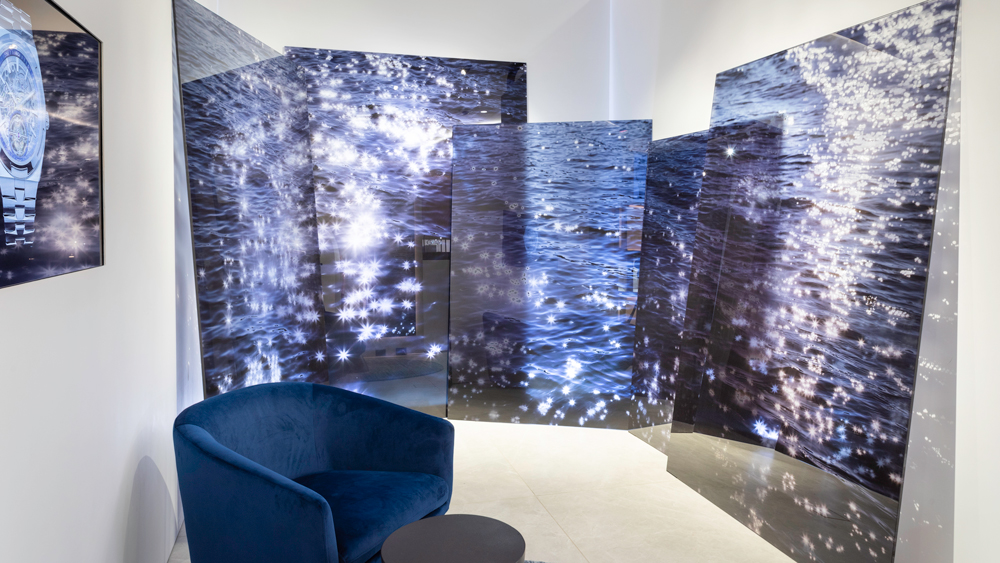 The watches on display, culled both from archives and current collections, were chosen for their metiers dials as well as their inner workings, in keeping with the theme of inner and outer beauty. Some are decorated with intricately decorated dials, using miniature painting, enameling, guilloché, engraving or gem-setting. Others are skeletonized, demonstrating that true beauty runs deep. 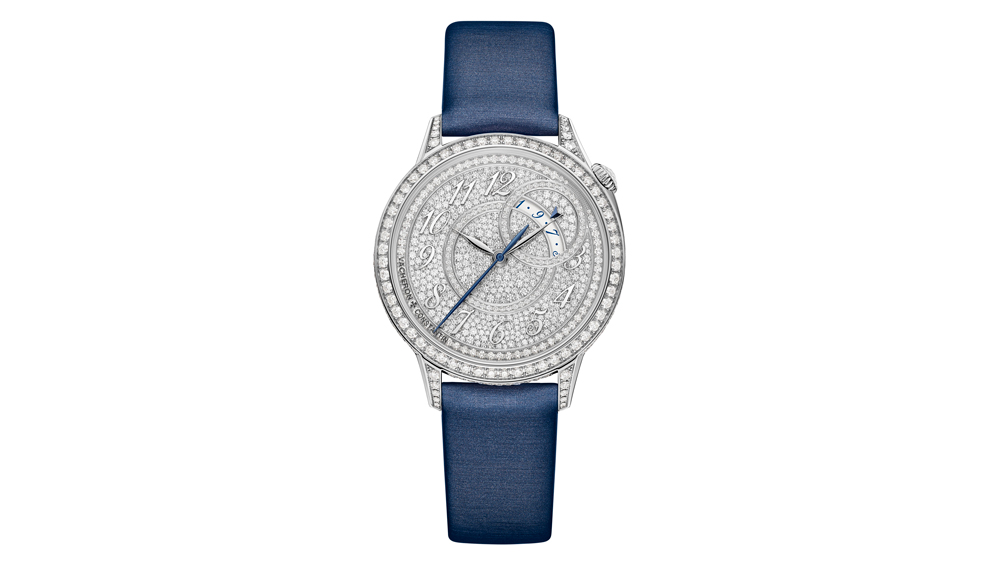 They are juxtaposed with models from the current Vacheron Constantin collection that represent modern interpretations of the brand’s historic craftsmanship,   including a fully gem-set ladies’ watch from the Egerie collection and the Overseas Ultra-Thin Perpetual Calendar. The exhibition runs until the end of September at the 57th Street Vacheron Constantin flagship in New York City. 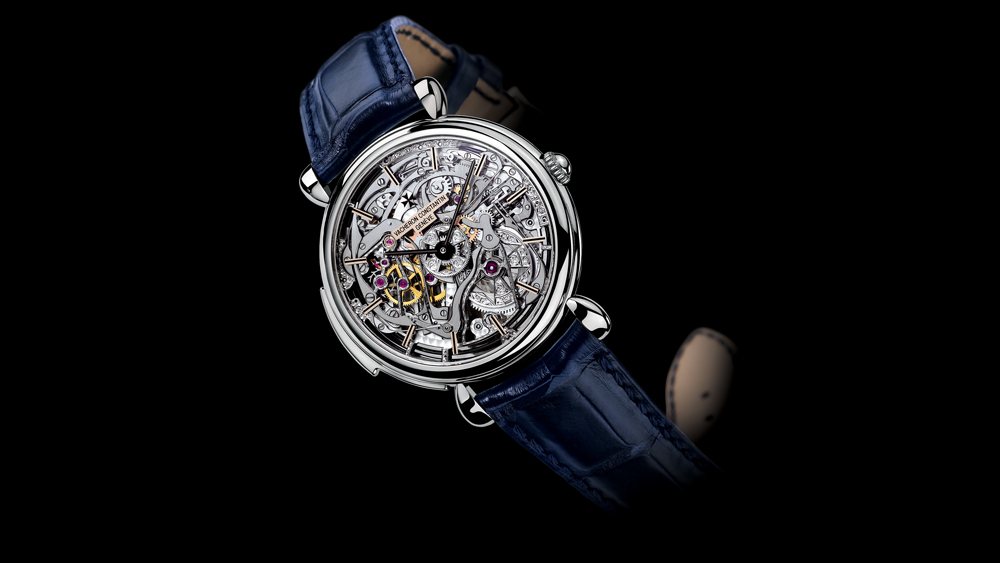 A skeletonized version of Vacheron’s iconic minute repeater, reference 30030, the movement of this watch was entirely skeletonized and engraved by hand. Almost 50 percent of the metal in the original 1755 caliber was removed, resulting in a finely sculpted lacework of metal. This one, made in 2006, is one of only 15 pieces created in platinum. 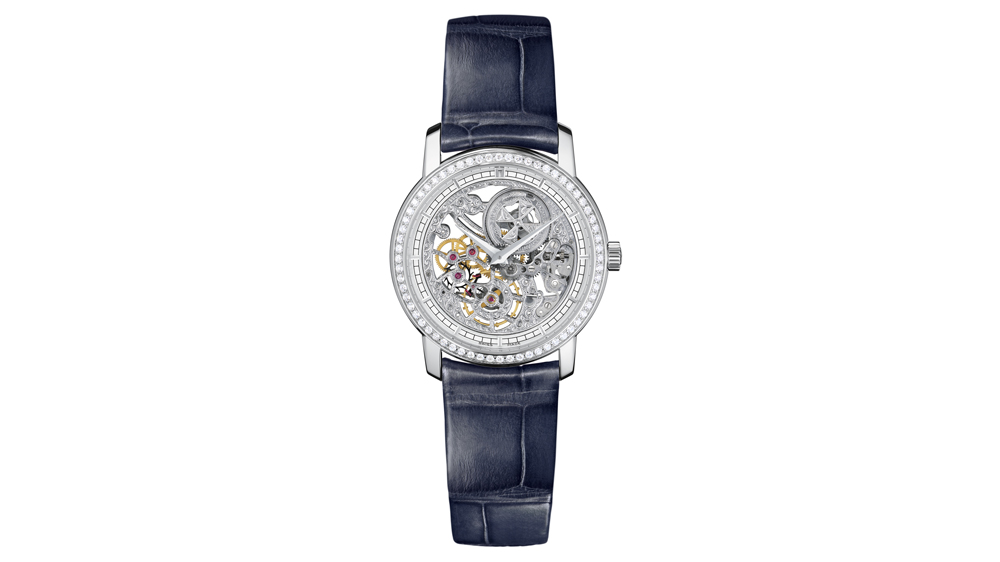 The Traditionelle Ultra-Thin Squelette, made in 2009, is only 30mm wide and set with 64 diamonds, which makes it a rare thing: a ladies’ watch with a skeletonized manual movement. It is a work of true skeletonization in the traditional sense, with the remaining plate and bridges engraved in elaborate scrolling motifs. It is made to Hallmark of Geneva standards. 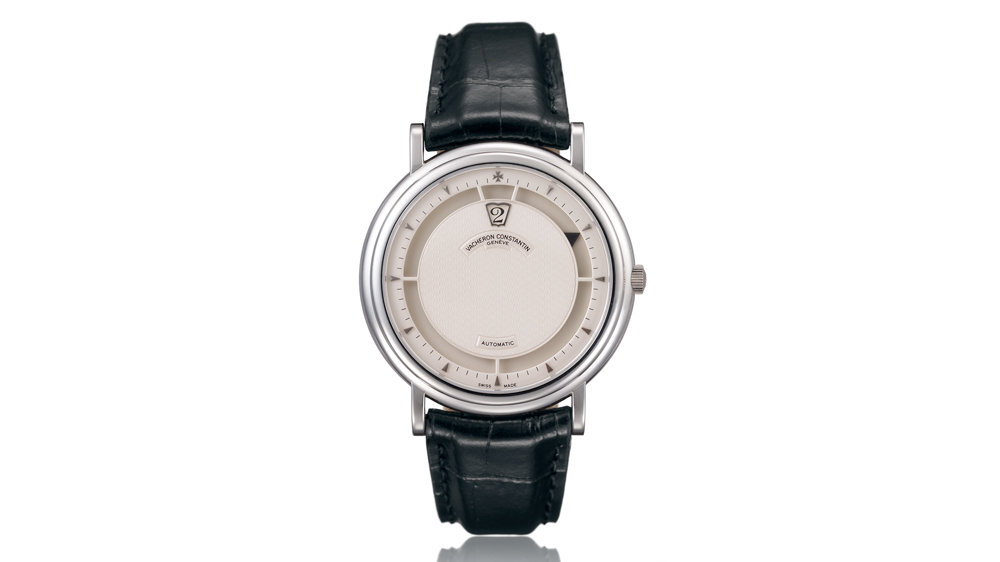 The Heure Sautante (jumping hour) has been a Vacheron Constantin specialty since 1824. This platinum piece, made in 1995, is one of only 150 reference 43040 models made in platinum during the early 1990s. The onyx minute marker moves mysteriously around the dial, visible only through a slot, a signature display that can be found on Vacheron Constantin pocket watches from 1929. 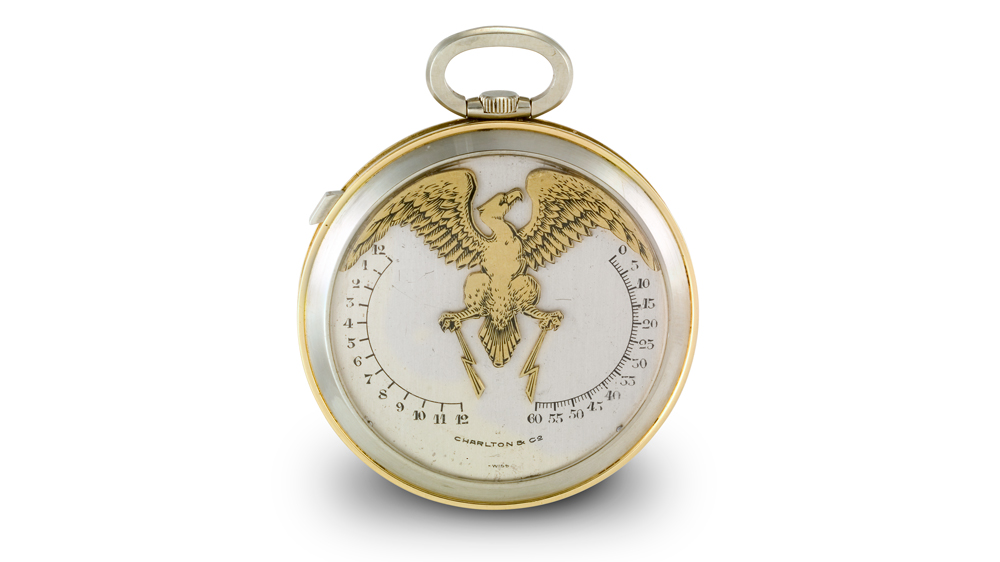 A pocket watch in yellow and white gold, with a retrograde hour scale on the left, and a retrograde minute scale on the right, with a gold eagle in the center. Made in 1929, it is double signed by Charlton & Co, an American jeweler founded in 1909 in New  York before expanding to Palm Beach in Florida and Rue de la Paix in  Paris. 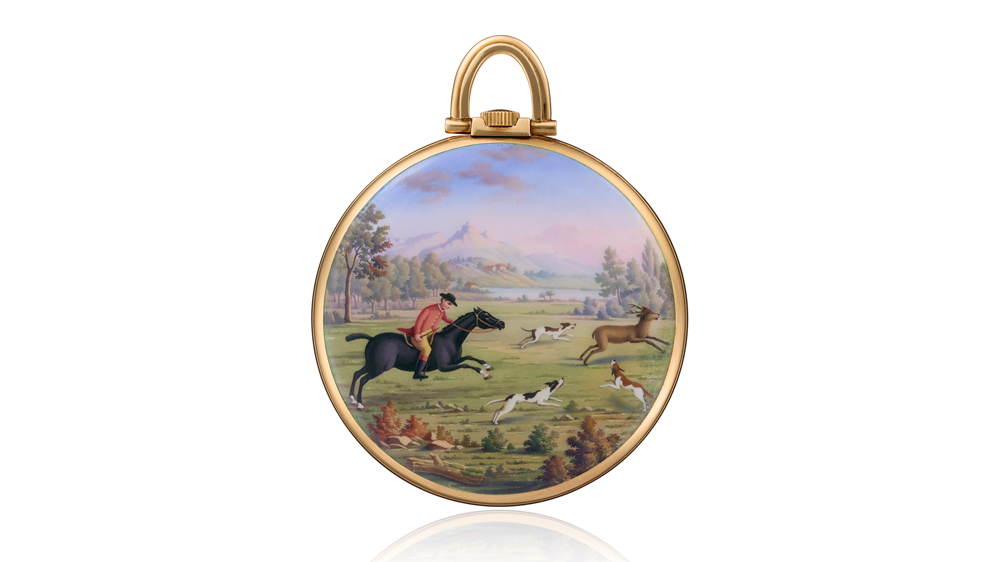 This enamel watch was painted by Carlo Poluzzi, considered one of the greatest enamel painters in the watchmaking world. He signed numerous pieces for Vacheron Constantin. This one, made in 1952, depicts a Chasse à Courre (hunting with hounds) scene. 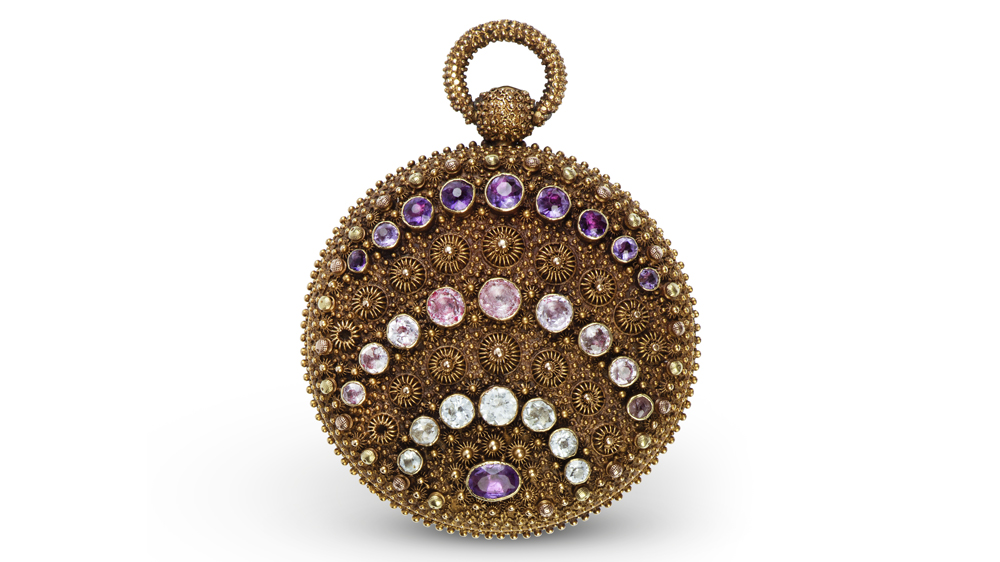 An 1822 yellow gold engraved and gem-set pocket watch. The case is hollowed out and then engraved to create domes, beads and rosettes in a baroque-inspired style. The technique, known as ramolayage, is similar to carving and is often associated with Renaissance period jewelry. It is also set with several large amethysts in graduated colors.