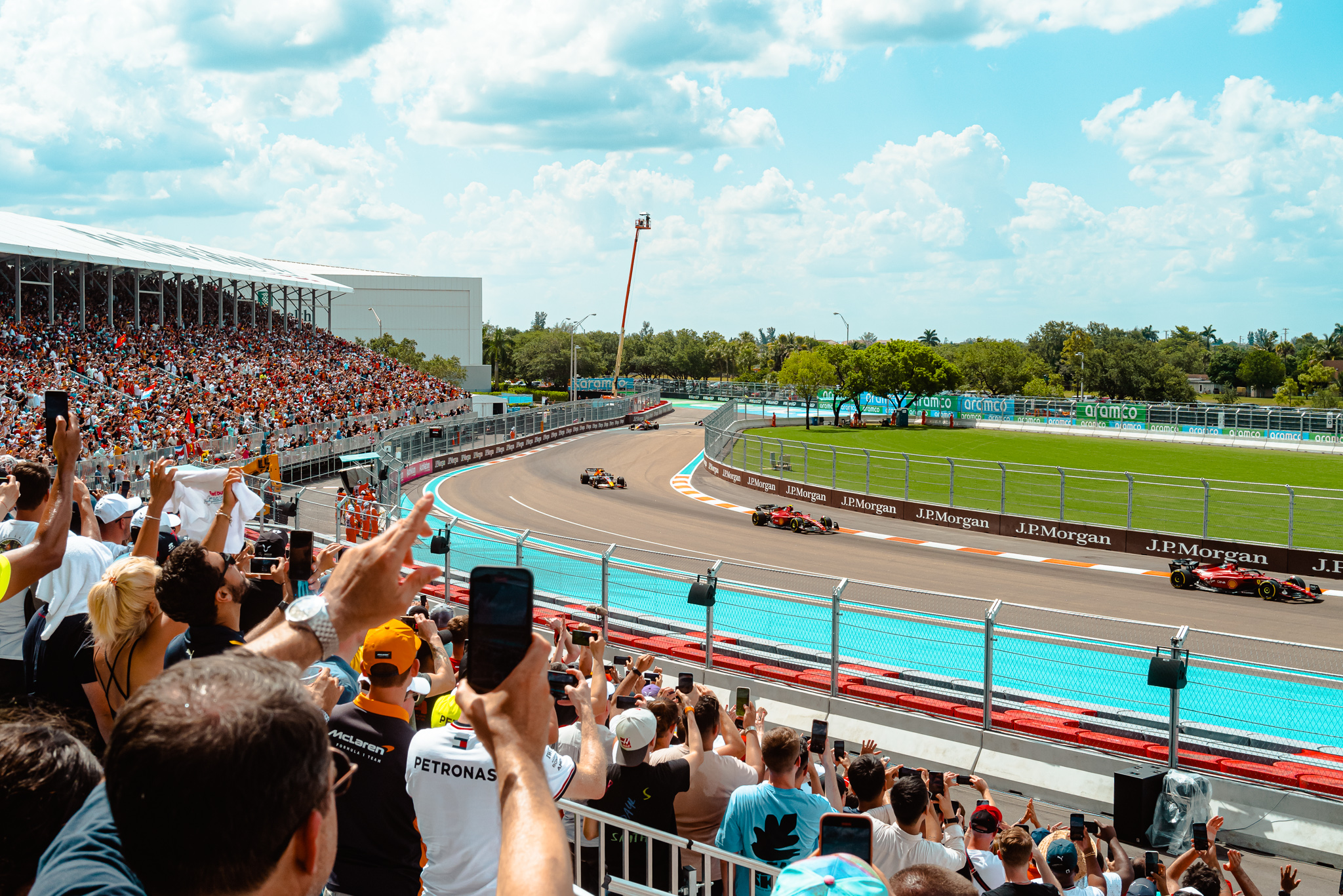 You could hear it before you could see it. A visceral, angry rumble of distant thunder that turned into a low growl as the car upshifted. Suddenly, there was a flash of red, dark blue, or silver, like a ship completing a jump from hyperspace. It was here at the terminus of the 1.2km-long backstretch on the Miami F1 course where we were perched, watching Max Verstappen chase down Charles LeClerc with Lewis Hamilton in hot pursuit. To date, there have been eleven different F1 events in the United States (including Austin, which is now a regular stop on the Grand Prix), but the hot, humid, and star-studded spectacle here at the newest U.S. race has been unique unto its own. It’s also the event that Mercedes-AMG Petronas Formula One team sponsor IWC has chosen to launch its newest collaboration: the Pilot 41 Chronograph in the team’s own “Petronas Green” livery. For a more in-depth look at the watch, get inside the F1 paddock at our launch event with team boss Toto Wolff, and go hands-on with the watch right here. 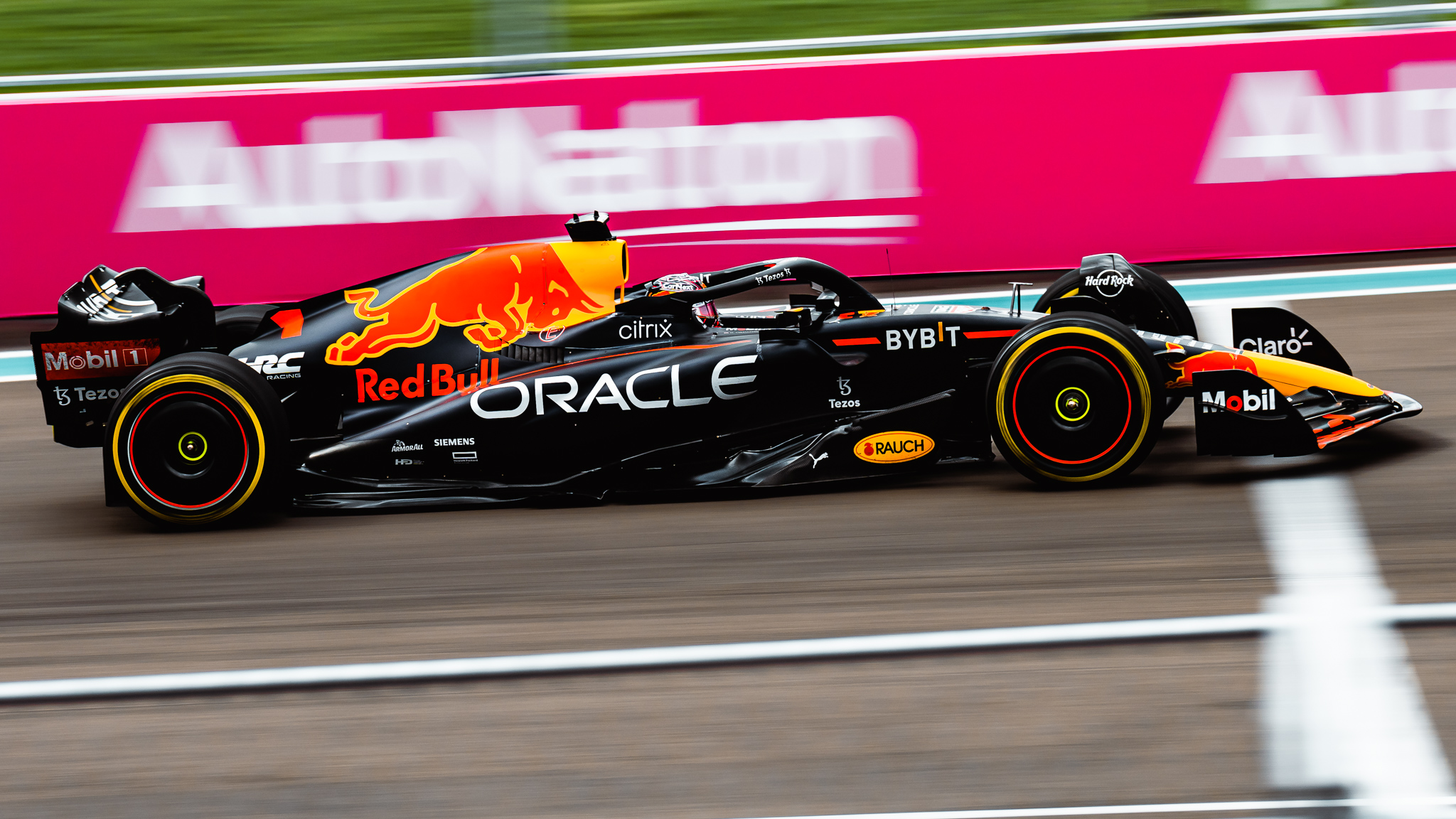 I’ll come right out and say it: F1 was a sport I never understood — until 2019 when I stumbled upon a little Netflix show called Drive to Survive. I was immediately hooked on the sport’s high-stakes drama and mind-boggling speeds, its dynamic cast of characters and rich motorsport history, its incredible complexity in financing, all the interplay and politics among drivers, and its many exotic circuits around the world, not to mention its many interesting watch-spotting opportunities. But I wouldn’t be the only new fan introduced to the sport via the same avenue — Drive has largely been responsible for an enormous surge in popularity in the sport in the United States, and the sellout crowd at the Hard Rock Stadium complex was the proof in the pudding. In fact, over half of U.S. adults who identified as fans of F1 have reported by national survey as having become fans in the last five years, with 26% of those coming in the past year. So, yes, the F1 bandwagon in the United States is running at full speed, but in bearing witness to the fan pageantry and all the drama and race cacophony at Turn 17 in the searing heat of the South Florida afternoon, it’s a bandwagon that I’m still quite pleased to have found. Better late than never, right? 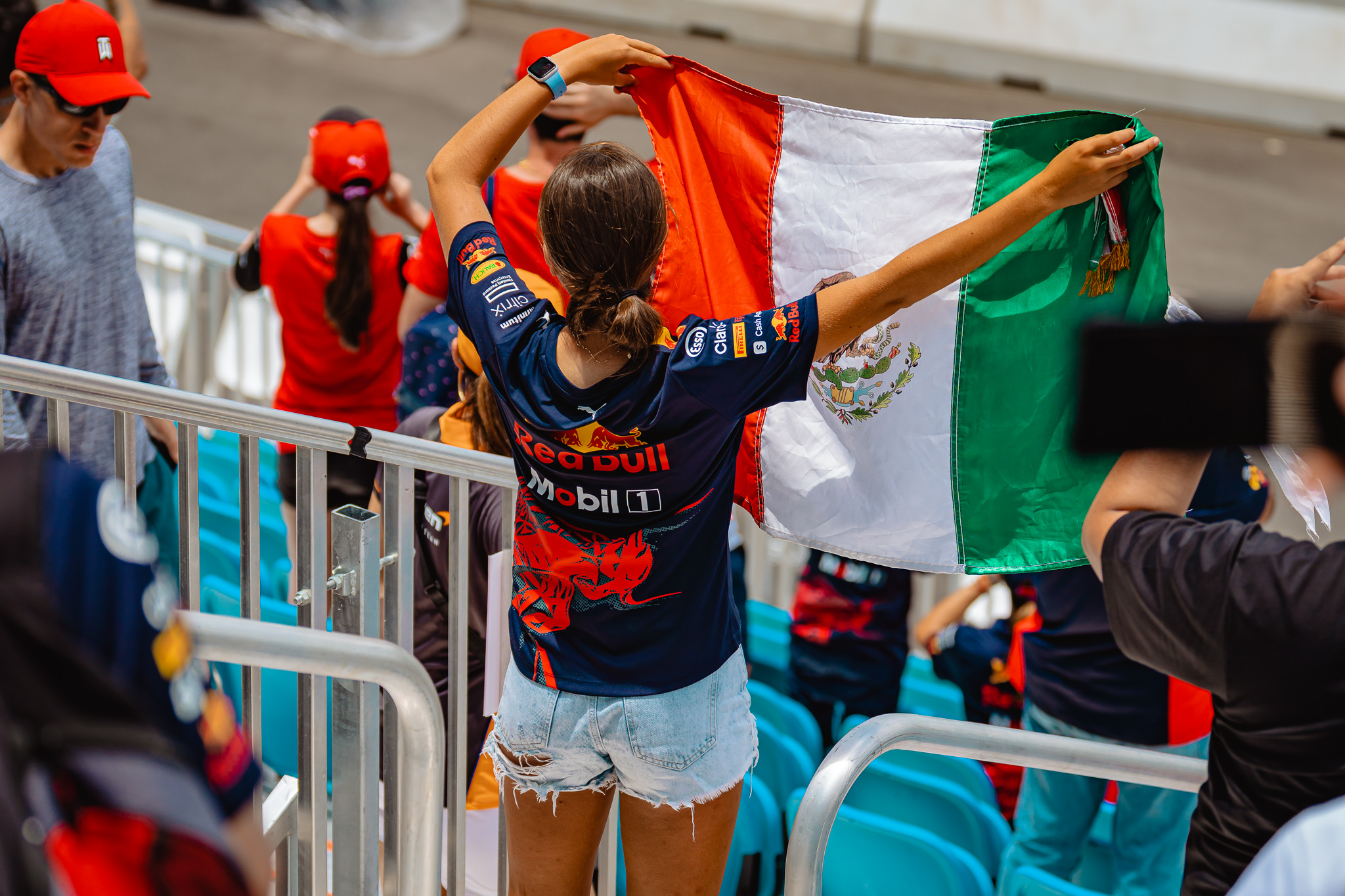 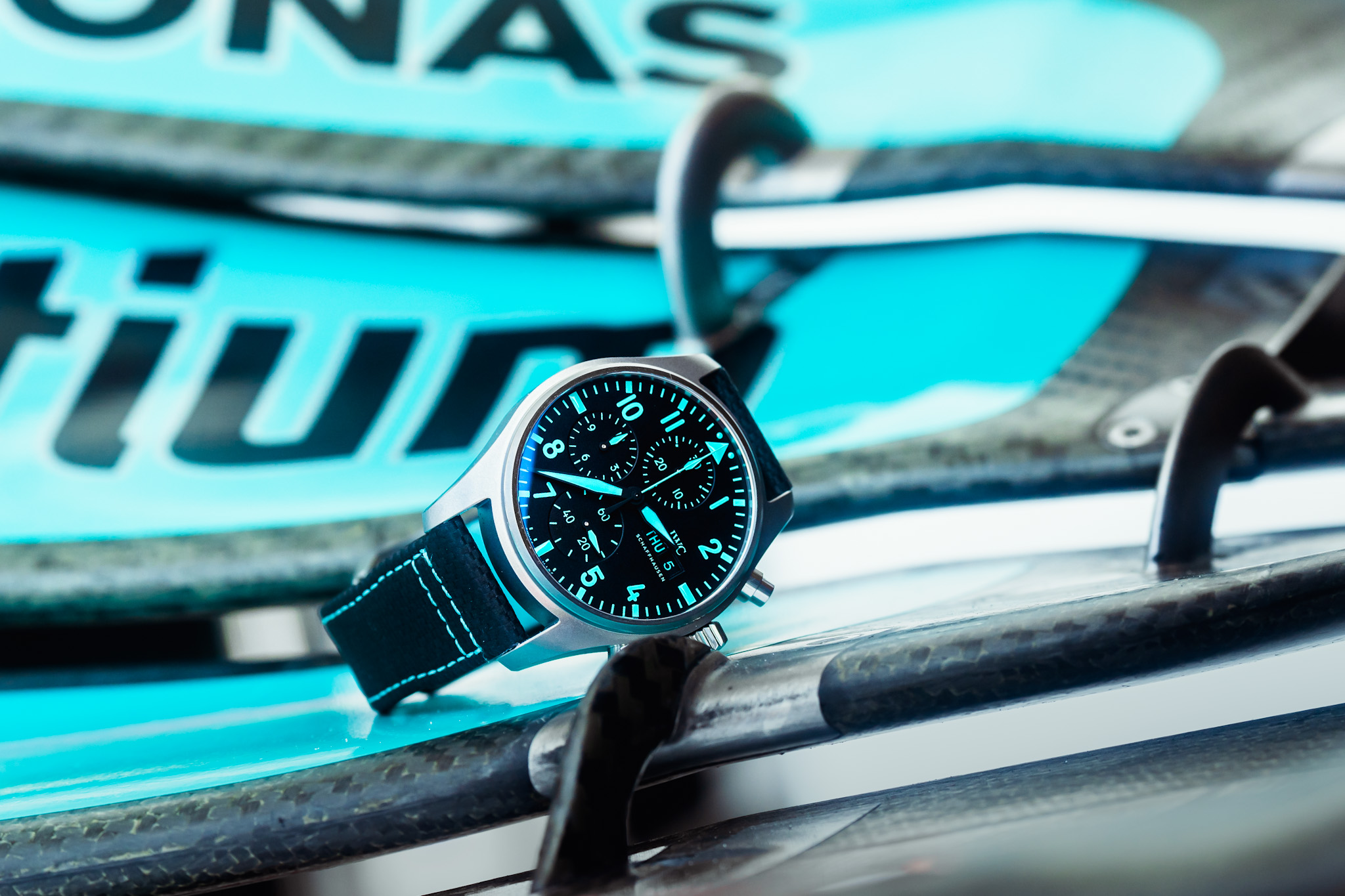 Traditionally speaking, most watch and F1 team collaborative editions have come during a different era of motorsport — one where F1 was relegated to its more esoteric status in the United States. The watches, by the same token, always felt like equally esoteric secret handshakes reserved for a small number of a very specific type of fan or collector. But with the sport’s popularity now at an all-time high, IWC cleverly leveraged all that surge in interest to fill Miami Beach with Big Pilot billboards and launch the Pilot 41 — a collaborative reference that wisely is expressed sans any co-branding, and is just characterized by another certain “color of the moment,” which conveniently has long been one of the key visual identifiers of the Mercedes-AMG Petronas team, now home to F1 superstar and seven-time world champion Lewis Hamilton and teammate up-and-comer George Russell. 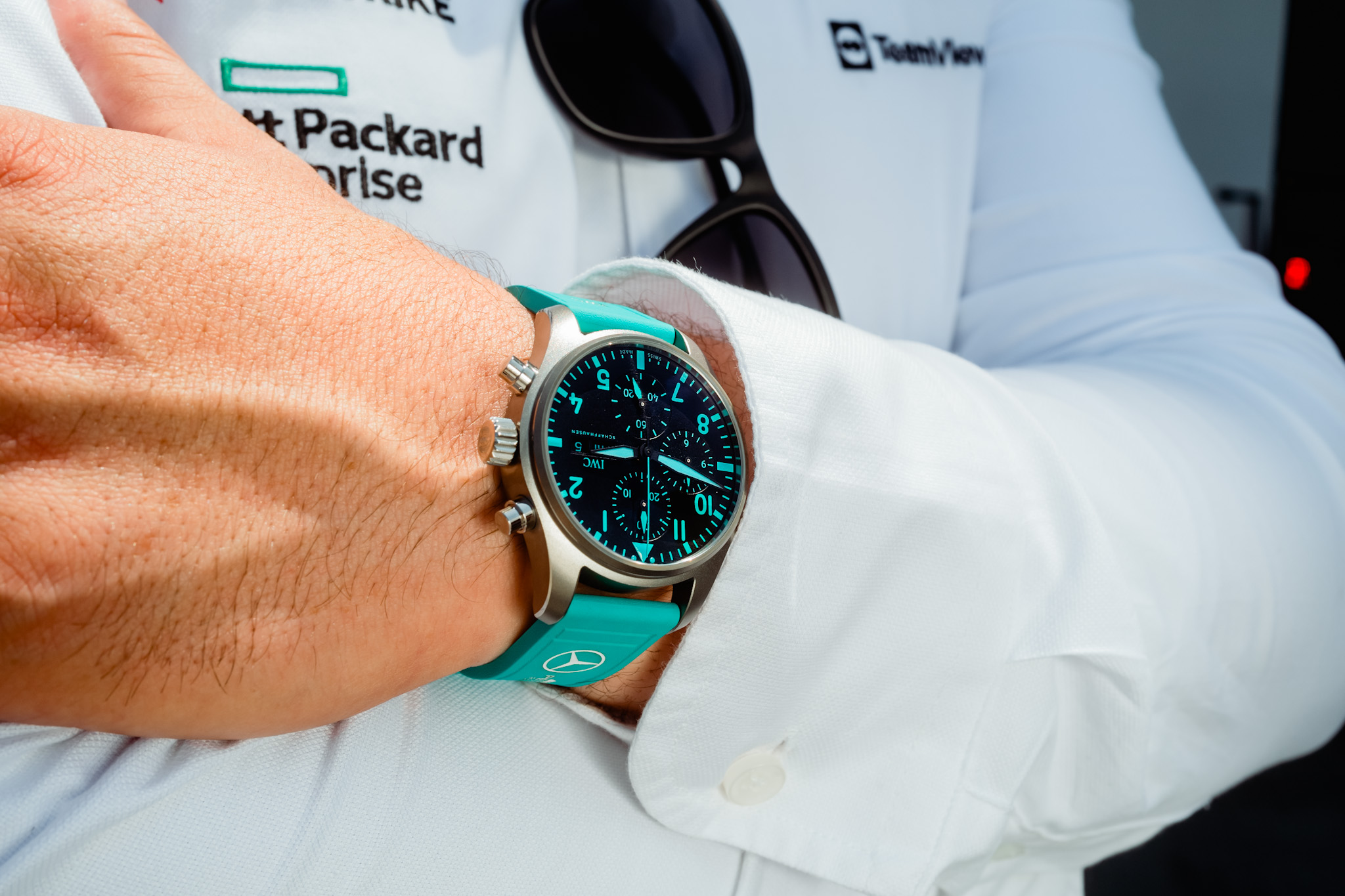 The introduction was particularly well-executed, as the moment the announcement was made at Thursday’s launch event, the first allocation of watches was immediately available for purchase via IWC’s e-commerce site. And the speed at which delivery took place was evident by the time the qualifier event rolled around, as there were plenty of Petronas Green Pilot 41 watches mixed in with Aquatimers and Portugiesers on wrists in the grandstands and milling about the Turn 18 campus. And on the lips of nearly every new owner of the watch, was the goal of somehow procuring one of the co-branded Mercedes-AMG rubber straps — an accessory in the package reserved exclusively for pit crew, support staff, and, you know, actual members of the team like drivers Hamilton and Russell. 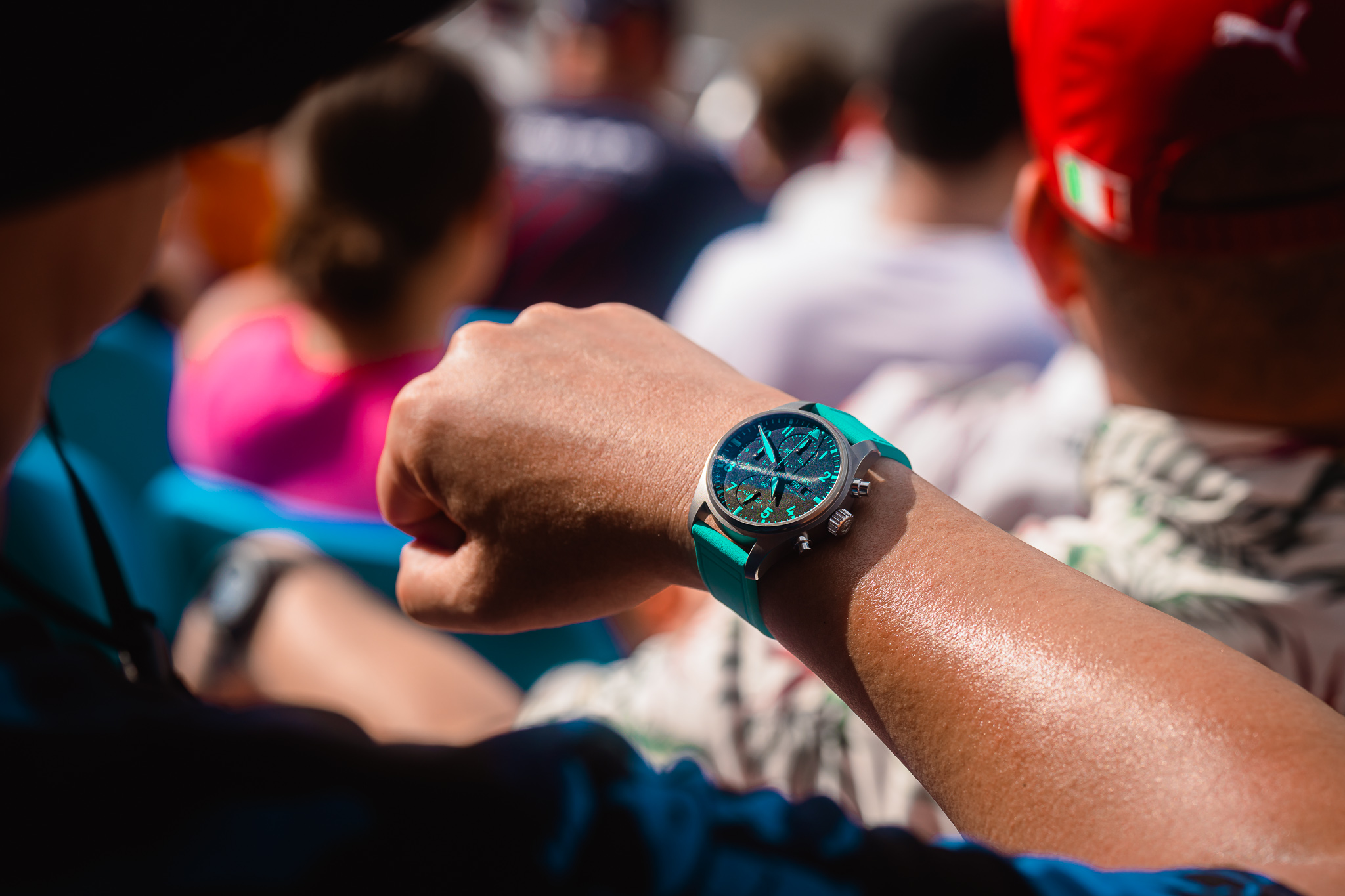 However, don’t believe everything you might have read on the Internet — at the time of this writing, though the first allocation of the Pilot 41 Chronograph in the Petronas Green livery was, indeed, sold through, replenishments are on their way, and there are yet to be any waitlists for what’s turning into one of the summer’s justifiably hottest releases. Once again, this team collaboration has a retail price of $7,850, and it can be ordered directly from the brand’s e-commerce channels right here at iwc.com. 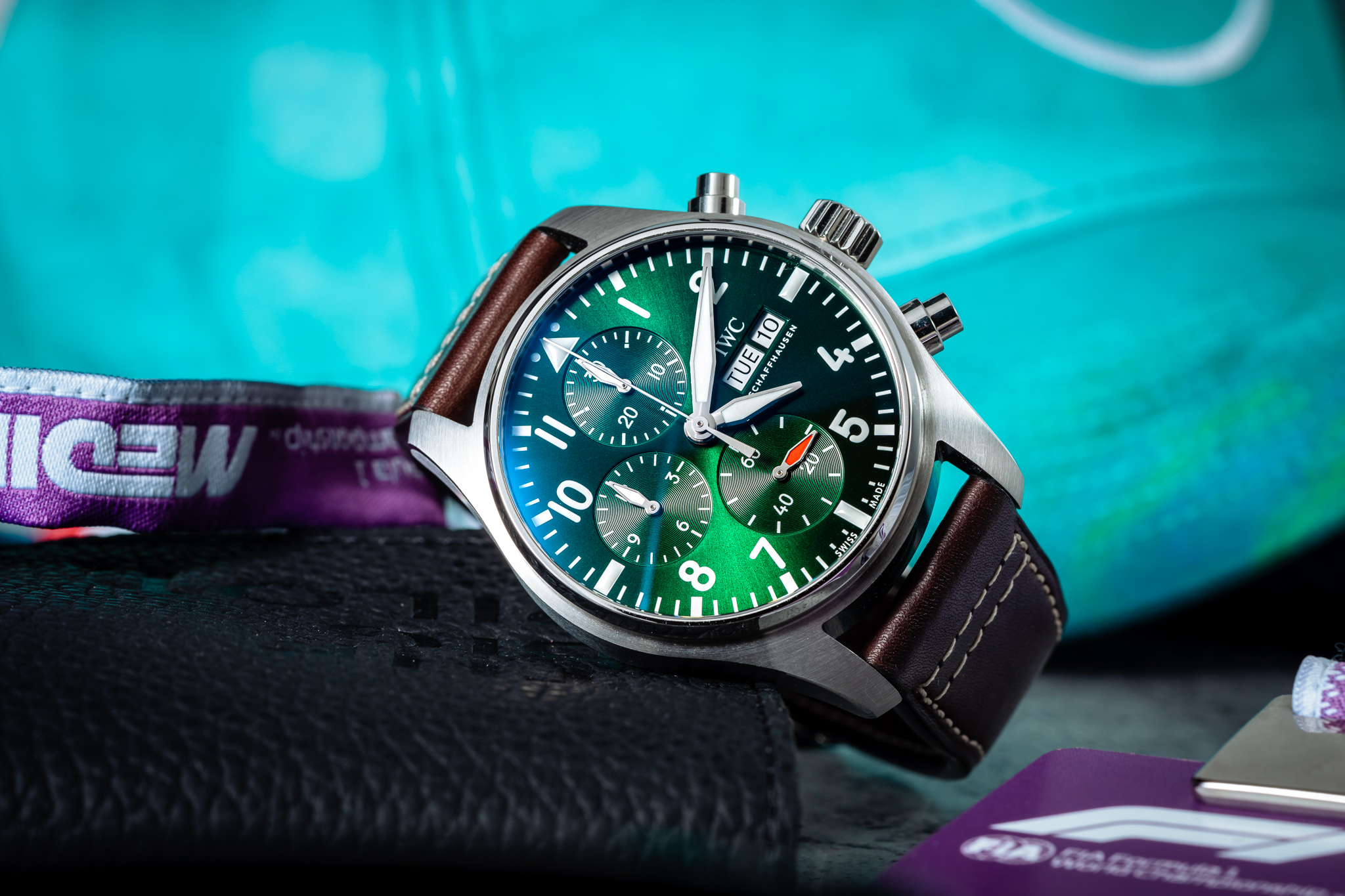 Though all eyes were on the Petronas Green reference, my watch of choice for Miami race weekend was this emerald-dialed Pilot 41